Great multiplayer games keep on giving even through repetition. Left 4 Dead is a game that keeps giving me enjoyment when I’m doing the same sequences over and over. One of the keys to this is how things play out differently each time. Of course nearly all good multiplayer games rely on the fact that you aren’t playing through the same situation, but L4D can ruin or highlight your day in the span of about 10 seconds. A well coordinated attack from the infected results in all survivors incapacitated and the round finishes. A good defensive move just before the safe room will ensure your entire team survives. Left 4 Dead is a pretty basic concept, four survivors work together against fast zombies to traverse a linear series of maps that form a campaign. 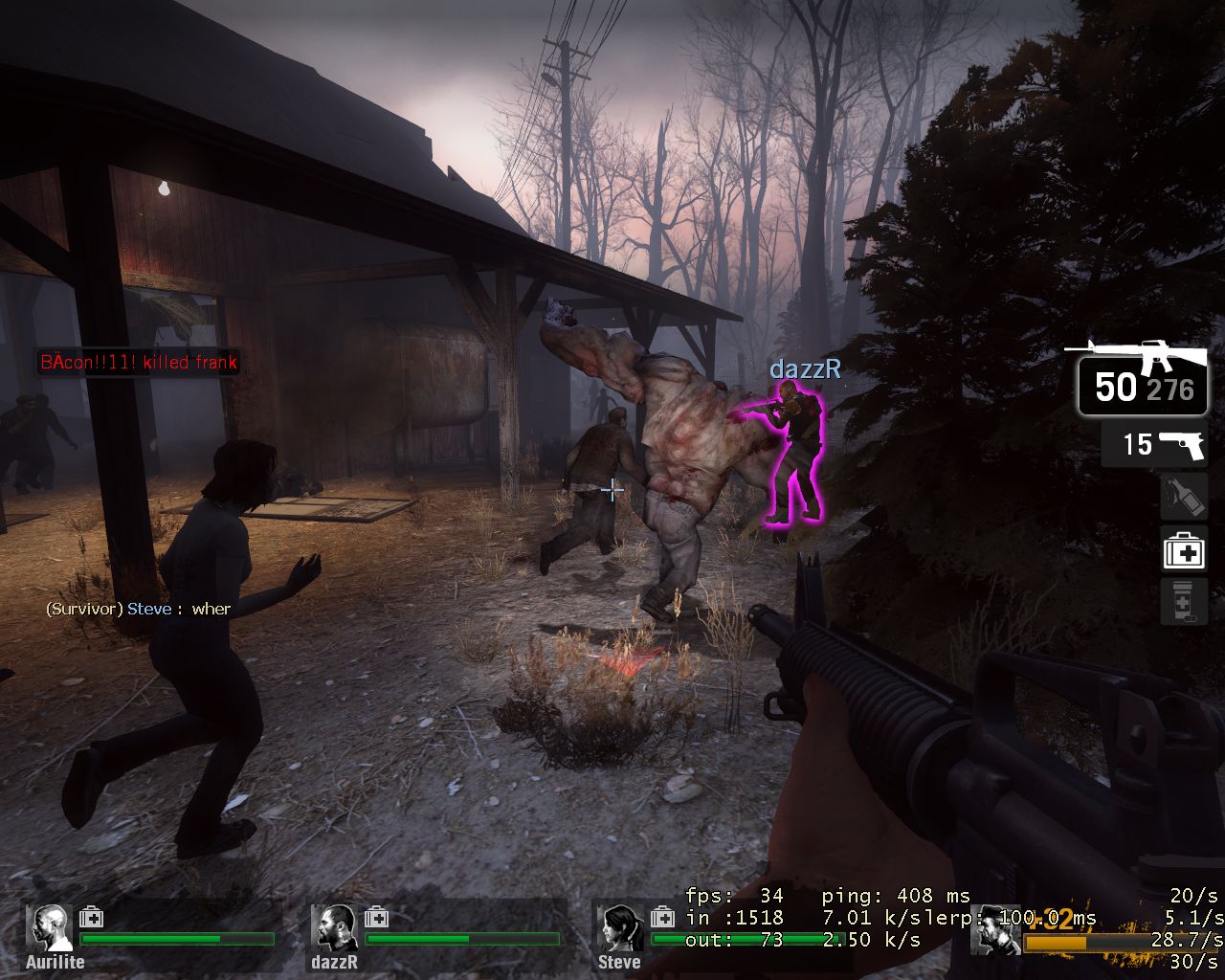 The multiplayer versus mode is asymmetrical, and it’s surprising how well it works at times. As a survivor your job is simple, get to the safe room alive with your team. To do this you’ll need to stay close, and help each other. Those who run ahead or lag behind are often targets for the enemy team, so you will always need to know where all of your team is. As infected you will mostly be trying to gradually reduce the survivors’ health. To do this well you’ll need heavy coordination and teamwork, using distractions, traps or the maps themselves to your advantage. Any single infected boss isn’t going to make much of an impact on their own against a good team except for the Tank. In combination, the special infected bosses can deal some massive damage, if you can split the survivors up you are halfway to victory.

Survivors move through levels and pick up audio and visual signals as to the location of the special infected. This helps them prepare or indentify where the danger is coming, sometimes it may be a good move to track them down and kill them before they attack because there is at least a 15 second spawn time before they can come back. If a horde is attacking your team you’ll be less likely to notice special infected due to the sound and visual impairment. The melee type infected class that pounces and slashes – Hunter – can blend in with the crowd and make a few slashes before he dies. He can come from high above and maul a targeted survivor with bonus pounce damage although landing big pounces on moving survivors takes skill. Boomers are fat; they vomit bile which sends a new horde of basic zombies to the vomited on victims, usually effective in open spaces so hordes can surround victims. The standard zombies aren’t particularly dangerous in themselves but for boss infected, it means time to attack. Those vomited on have greatly reduced vision which aids the attack and sets the stage for some serious survivor separation. 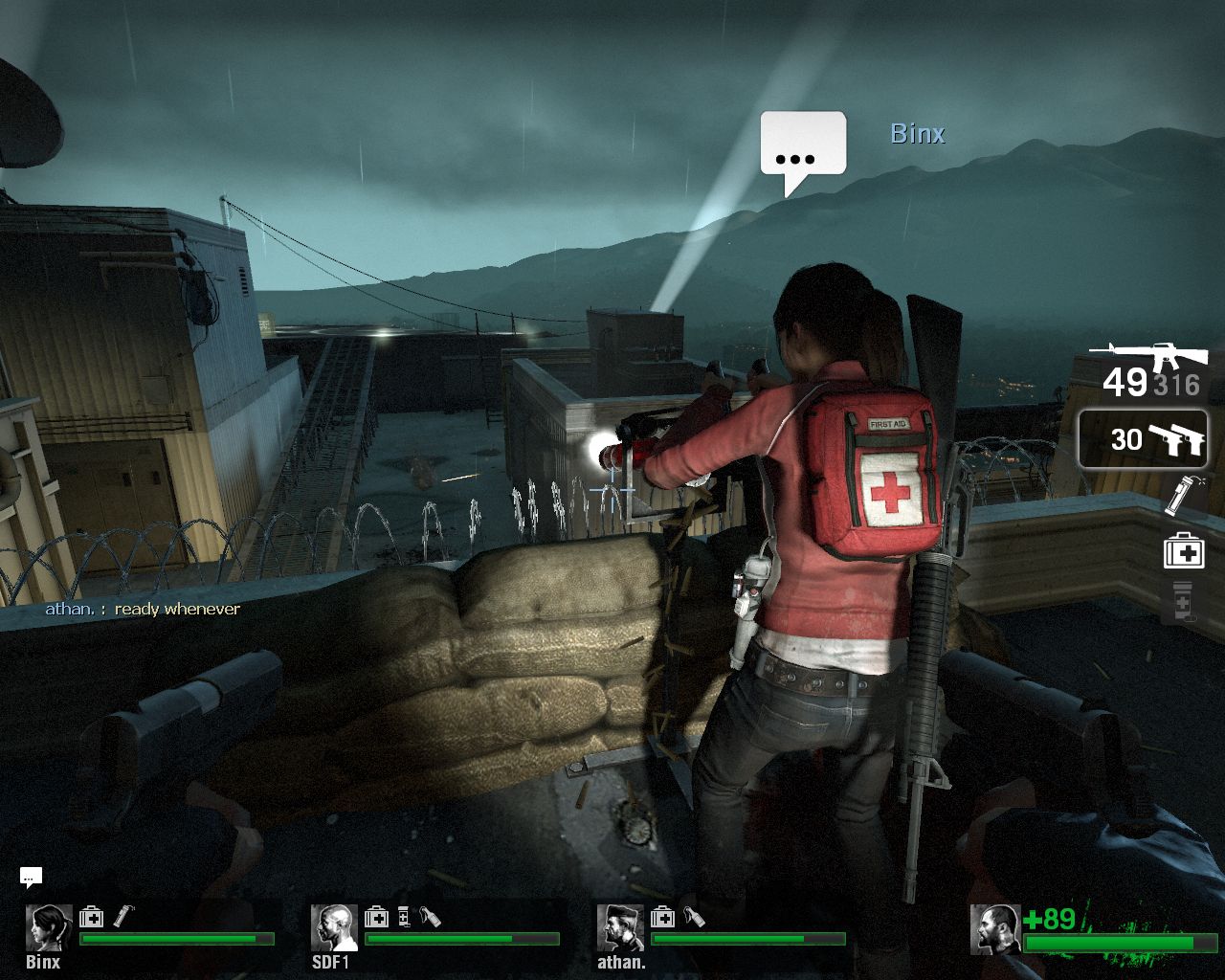 Along the levels two even more other special infected will appear a witch and a Tank. The witch sits alone, crying. If somebody gets close to her she growls, flashlights are also easily spotted by the witch. The witch gradually gets mad at survivors near her, once annoyed the witch will speed run to the person who set her off, instantly incapacitating them on contact. Then she will rapidly tear the guilty survivor to shreds and if the other survivors are occupied or far away it results in death. She hasn’t got much health however and can be avoided. Infected use her more as a tool, because unprepared or surprised the witch results in one survivor down at least. The Tank unlike the witch can be controlled by a random infected player. His job is to get busy bashing the survivors. He has pretty high health and can knock the humans around quite well. In close quarters he’s deadly and can knock survivors off roof tops with the right punch and angle, which is hilarious. He can lob rocks and throw cars at survivors and in some cases is better off doing just that from a distance. On fire his fate is shorter, but in combination with other infected it’s one of the best chances for survivor annihilation you get, or at least do some considerable damage. The tank can usually be defeated fairly easily by four healthy survivors so additional help from other infected is a must.

The setup for attacks and defences is quite basic, but it’s the use and the timing that makes all the difference. An example would be the Smoker, whose long tongue can reach and grab a survivor shortly after he wriggles and is unable to move he keeps taking damage while being dragged back to the smoker. In this state the smoker is stationary and very vulnerable, easy pickings for survivors. If one survivor goes back to rescue the trapped victim an infected hunter can lie in wait and pounce at the would be rescuer, resulting in two down and more damage until more backup arrives. The smoker is also an opportunist class, a few key points along the levels he can pull the last survivor and the other survivors will not be able to do anything. This might be because they went down a sewer pipe or perhaps the pull is from high ledge. Being patient is more important than rushing in and wasting these opportunities doing only small damage. Just as the survivors work together the infected must coordinate moves and provide support to each other. In some cases, perfect timing can result in victory very early on during the level. Infected players will spawn in ghost mode; visible to only other infected players, when the view to survivors is obscured they can spawn. It’s also worth noting that certain points of the map are much better to attack than others and it can be crucial to wait for fellow infected to spawn. If a survivor is incapacitated special infected will try to keep him that way for as long as possible to maximize damage. 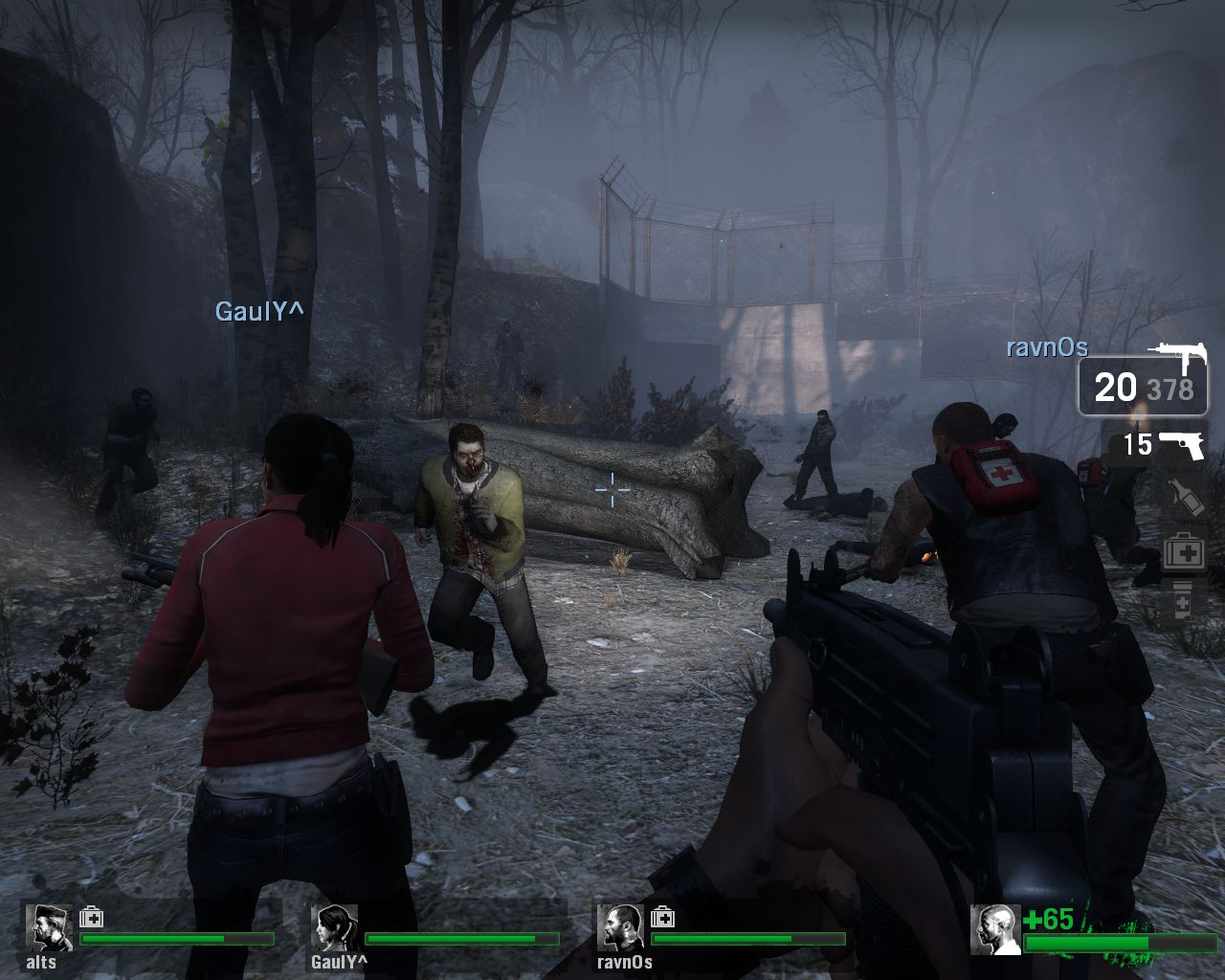 Survivors who do some exploration might find useful medkits, molotovs, pills or pipebombs that can greatly improve their chances along with more ammo and weapon upgrades. Of course the extra exploring takes time and puts you at higher risk, instead survivors can rush through. Infected on a spawn timer will spawn fewer times if the survivors get to the end faster so it’s quite common to see rushing teams. Rushers can be defeated though, grabbing a few of the survivors at the back can slow down the pace and then swarms of normal infected can become a bit too much to handle. The game features a few crescendo moments, at certain places in the campaign you will have the chance to relax briefly before unleashing hell for a short time to progress onwards. As infected it can be sometimes frustrating, particularly if one new player takes the roll as Boomer, who initiates many ambushes by blinding and calling a horde. If he fails more than succeeds your chances of winning are greatly reduced. This can explain the rather heavy lopsided nature of multiplayer games. More often than not one team dominates fairly easily. People also tend to leave the losing side after one or two safe rooms, which can exacerbate the problem. Naturally it’s good to be on the winning side but it’s better to have a close well fought game.

At the moment the main issue with Left 4 Dead is the fact that you can really only play two campaigns in versus – the superior mode. So while I emphasized that this game is still great fun on replay its lifetime would be greatly enhanced by adding more content. It’s disappointing that the game is still without the co-op campaigns Dead Air and Death Toll months after launch when they require only a few weeks of testing and modifications to become versus ready. Valve has announced free content for Left 4 Dead, including these two versus campaigns and an additional survival mode which will come later this year. 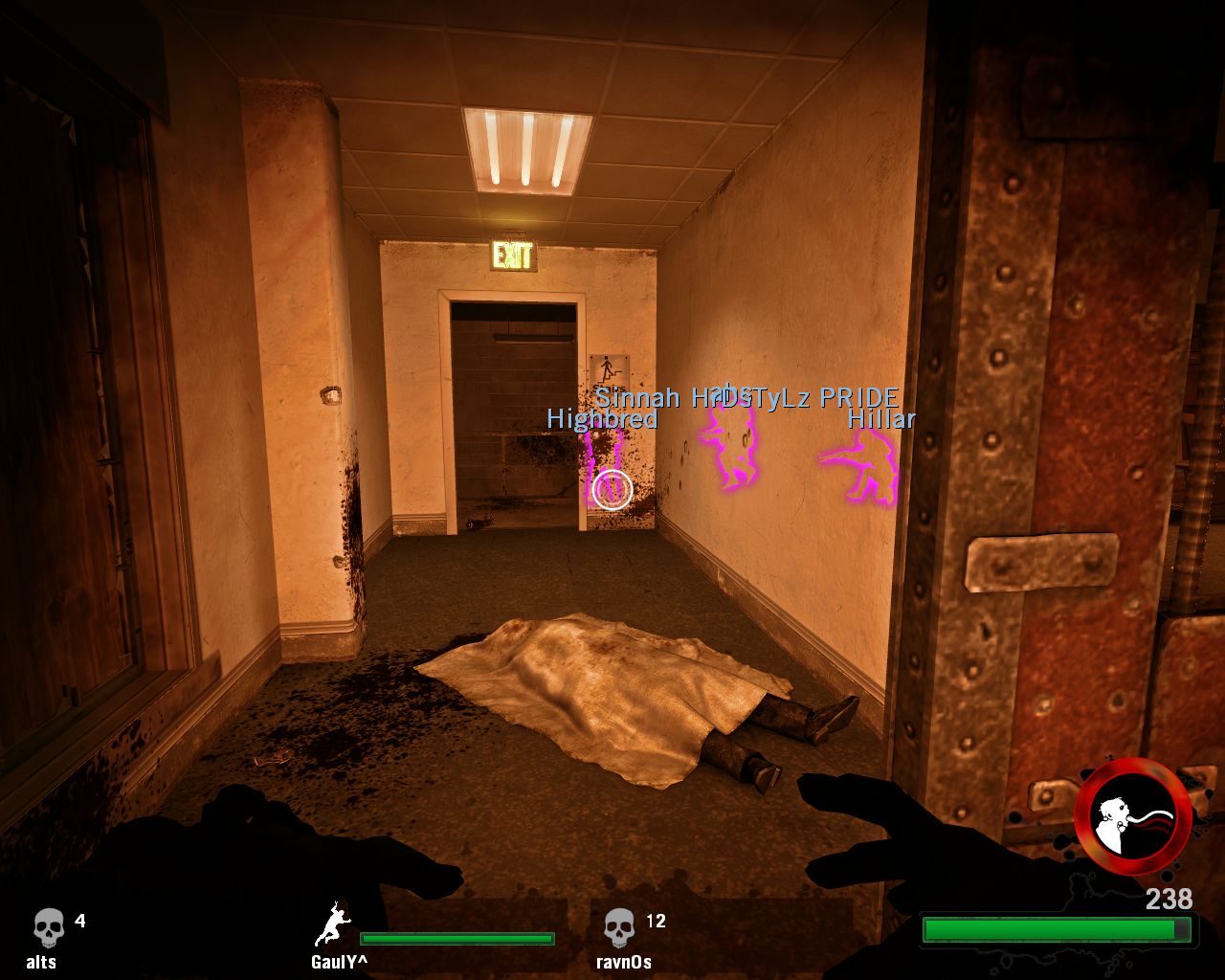 Another big issue is the way in which you get into existing or new games. Left 4 Dead features a lobby style system and to be brutally honest it’s not very effective or efficient. Sometimes I’ll be placed in servers from other countries- hello my communist friends, other times it will make a lobby group join a server that pings badly for everybody. This is even after some improvements which haven’t helped a lot although a console command does let you use a server browser that really should be in the game by default because at times it’s all you have to let you join a decent server. Some may argue over value and the content is indeed a little light, but it’s one of the better multiplayer games in years because it’s such a tight cooperative multiplayer experience. I don’t recommend this title if you stick to single player, co-op can be fun and should be played before diving into versus. Once you invest some time into versus mode and get a feel for the basic elements you’ll probably find quite a few hours of enjoyment.

Our ratings for Left 4 Dead on PC out of 100 (Ratings FAQ)
Presentation
87
Standard Valve polish, everything looks great. The characters and zombies are superb, combined with some great voice and effects.
Gameplay
84
One of the better multiplayer games in years, the co-operative nature and the balance between the sides ensures lots of replay value, no two games are anywhere near the same.
Single Player
50
There really isn't any, you can complete the campaigns with bots. But you don't want to do it more than once. Good for new players to get the basics.
Multiplayer
85
Left 4 Dead is fantastic multiplayer game when it's at it's best, but joining games and getting into a good game is sometimes inhibitory. Not a lot of maps to play.
Performance
(Show PC Specs)
CPU: AMD Athlon AM2 5600+ @ 2.9GHz
GPU: Powercolor Radeon x2900xt 512MB
RAM: 4GB DDR2
OS: Windows Vista 32-bit

86
Looks great and runs just as well. No slow downs when dozens of zombies appear and very few crashes.
Overall
84
Left 4 Dead is a fantastic multiplayer game that needs more content and some fixes relating to joining games and maximizing the experience. 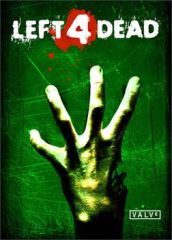 Our Review of Left 4 Dead
84%
Great
The Verdict:
"Excellent cooperation in well balanced asymmetric competitive multiplayer."
Game Ranking
Left 4 Dead is ranked #212 out of 1857 total reviewed games. It is ranked #12 out of 28 games reviewed in 2008.
211. Penumbra: Overture
PC
212. Left 4 Dead 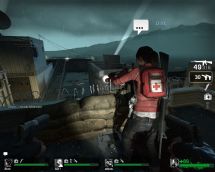