Having been in development for so many years, Alan Wake can finally see the light

Alan Wake is a third person action game from Remedy and Microsoft. This is possibly one of the longest titles in development that has actually got released. Originally presented as an open world action game set to promote Windows Vista and DirectX10, the game has undergone many changes in its long development cycle. What we have now is an Xbox 360 exclusive title that cannot, try as it might, reach the expectations of fans that have been waiting all these years. The open world is gone, the cutting edge technology had to be abandoned and the story is unfortunately convoluted. Surely, everyone was hoping for more from the creators of the brilliant Max Payne series. 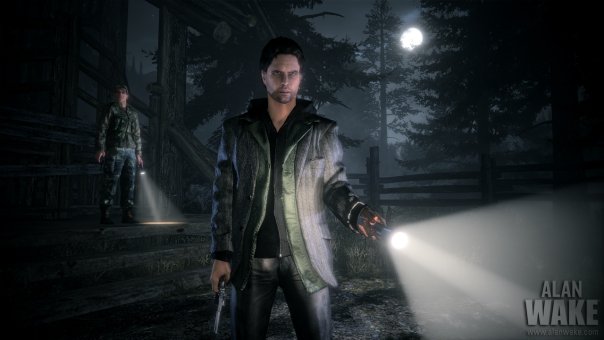 Remedy’s previous work in Max Payne has been hailed by many fans as having one of the best stories ever in a video game. The noir style of the setting and the story made for a great immersive and edge of your seat experience. With Alan Wake, the writers attempted to take the storytelling in a new direction, specifically to imitate Stephen King. Alan Wake himself is a writer, who’s enjoyed his life but is recently unable to produce any new material. To help his creativity, he and his wife Alice decide to take a trip and spend time on vacation at a remote town called Bright Falls. Everything looks nice and peaceful, but shortly after arriving Alice is kidnapped, and Alan sets out to rescue her after receiving a ransom call. As he enters deeper into the dark forests surrounding the town, Alan finds himself battling an evil matter that’s taken over the townsfolk and is determined to stop him. There are various characters that you get to meet and fight alongside with, but nobody comes across as particularly memorable or interesting.

The setup for the story arc in the game is very respectable, but the game is simply unable to execute it well. As Stephen King gets referenced a few times in the plot, there are many similarities to his writing. There is an unnatural evil presence that haunts the town, and is only out at night. But along the way, the main thread is lost. The game is actually broken up into episodes, as if it was a TV show. This presents an issue of having a story and a resolution in every episode, while also keeping the main plot rolling along – and that’s something Alan Wake is unable to do. The main idea of the game often gets lost in the convoluted and confusing twists that take place inside the episodes and often have little immediate impact until a few big set pieces at the end. And that also becomes a problem – the ending is simply too heavy on material while also refusing to tell the player exactly what happened. It tries to be a movie which leaves the audience guessing as to what really happened (such as “Shutter Island”), but the game simply isn’t able to pull it off. No more of the story can be covered here due to spoilers, but also due to the sheer amount of misunderstanding and interpretation that’s bound to produce an opinion some readers won’t agree with.

At the core, Alan Wake is a third person shooter. Sure, there is a flashlight mechanic that forces the player to weaken all enemies before being able to shoot them. But this adds little substance to the experience, and acts merely as a way to extend each encounter. Alan must first shine his flashlight on enemies to destroy their dark presence, which acts as a shield, and then shoot them with regular weaponry. The flashlight uses batteries, which are more than plentiful, that need to be reloaded like a weapon when they run out. The flashlight acts as a crosshair of sorts, and there are a few different types – they are strategically placed by the game’s designers so there is little choice on when you can upgrade. The other special items include flares, a flare gun and flashbangs; all of which are essentially grenade type weapons that can be used to provide some breathing room when overwhelmed with enemies. 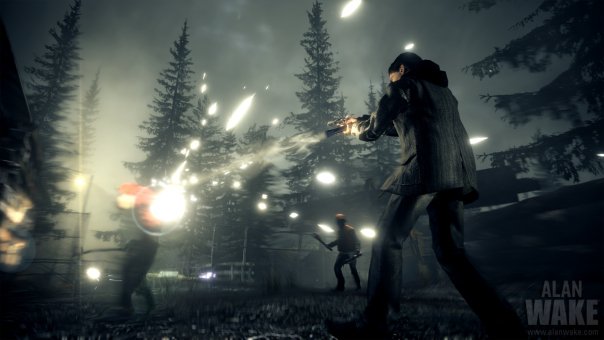 The enemies in the game are townsfolk who are possessed by the evil force during the night. The types of foes are somewhat limited – the regular melee foes will try to close in and take a swing at Alan, while ranged foes will throw axes and other items from a distance. There are also foes which move very quickly and are hard to shoot, as well as tough enemies which take almost two flashlight battery packs and extra bullets to take down. The combat is unique, but not overly interesting. The game refuses to let the player get ambushed, so if enemies spawn behind you, the game is paused as the camera zooms out to reveal where the attack is coming from – giving Alan plenty of time to turn around and begin the fight. Alan also has a dodge move which – if timed correctly – lets the player dodge every single attack from any enemy, melee or ranged. So overall, yes, the game is quite easy even on the hard setting.

Between fighting enemies, the game spends some time letting Alan start power generators with a QTE and search for hidden crates in the forest. There aren’t really any puzzles to solve – the game will almost always show you where the solution is when you enter. While most of the gameplay is solid, if not spectacular, there is one issue that almost ruins some set pieces. Alan Wake is apparently not a very good athlete – the sprinting ability of the character is very limited, after which he slows down to almost a crawl. The running energy seems unnaturally short, and given the circumstances – such as running away from a dark tornado – you would think Alan could get some adrenalin and sprint a little further. You rarely have to run from enemies, so the only part of the game this annoyance affects is the awesome set pieces – which Alan sort of ruins because he can’t run for very long (from the above-mentioned tornado). So the immersion is very much broken as you watch Alan limp towards safety, out of breath just meters from where he started running.

If there is one thing in the game that has remained in tact over the years, that would be the setting. Almost all of the game’s action takes place at night, and mostly in a forested area. The setting is atmospheric and the sound is well done, presenting a very memorable experience. The various light effects from the flashlight, flares and flashbangs are very effectively recreated and are the highlights of the game, pun intended. Unfortunately, after Alan is thrown into the forest a few times, things become to look very same-y. Halfway through the game, the dark forest no longer looks as menacing or engaging as it once was, and you realize it’s not really that dark either, except for the dark presence attack sequences. Light effects aside, the rest of the game is not very impressive graphically as the engine shows its age. Some of the character faces look rather inhuman, and the lip syncing is poor in parts. The voice acting and sound design are respectable, but again nothing stands out as particularly great. 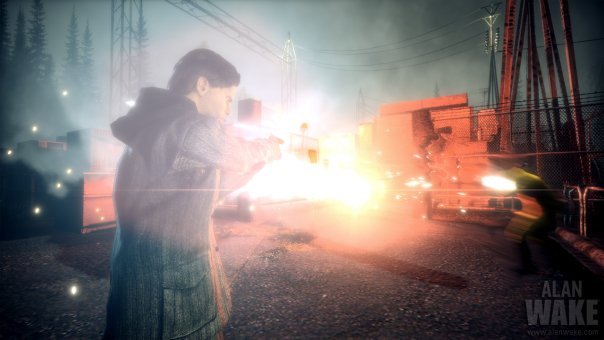 Remedy earned its praise as a renowned developer with Max Payne, and rightly so. When Alan Wake was announced, many fans were very excited about this project and its similarities to the previous games from the developer. However, many years later, it is sad to say that the wait was not worth it. The writers set out to create a story that’s comparable to the great works of Stephen King but were not able to do so. It takes more than continuously feeding the player bits and pieces of the puzzle without ever revealing the big picture to create a good experience, perhaps specifically in a video game.

The presentation is solid and light effects are great, but it manages to grow repetitive and loses its edge over the course of the experience. The gameplay uses the flashlight as a unique tool, but it adds little to the way this relatively easy shooter title plays. Alan Wake is by no means a poor title – but there is simply nothing here to justify the extremely long time in development, apart from the fact the game design had gone through many changes. If you are one of the PC fans that don’t own an Xbox 360, do not fret – it’s not the same title we were so excited to see, as announced all those years ago.

Our ratings for Alan Wake on Xbox 360 out of 100 (Ratings FAQ)
Presentation
75
The light effects are excellent and the atmosphere is great. However, the game lacks memorable characters or impressive visuals besides the light effects.
Gameplay
69
The flashlight adds a twist to the action, but lack of enemy variety and generally easy combat are somewhat of a downside. Easy puzzles fail to fill the gap between combat with worthwhile elements.
Single Player
60
An overly complex and convoluted story is broken down into episodes, which only add to the question box without ever providing answers. The game is decently long at about 8 hours, but has little replay value.
Multiplayer
NR
None
Performance
60
The framerate is steady and lighting effects look great, but some low resolution textures and poor facial animations detract from the experience.
Overall
68
Alan Wake seems to have lost many of its gameplay features as years of development passed by. The end result is an average action title with a few unique elements that's ultimately unable to grab the spotlight.

All videos for Alan Wake (3)
Advertisement ▼