Play through the first four years of the Harry Potter series in the latest installment of the Lego games franchise, while realizing it's all just an excuse to collect stuff

The Harry Potter stories are the latest license to get the Lego video game treatment, a series that started off utilizing the Star Wars films and has since incorporated other major licenses such as Indiana Jones and Batman. It is always a bit fascinating to see familiar places, characters and scenes from movies you enjoy converted into a simplified Lego version, and Lego Harry Potter is no exception. Unfortunately, if you’ve played any of the earlier Lego games, you may have some idea already of what to expect.

Fans of Harry Potter will be happy to find that all of the familiar locations are faithfully recreated. The game is really quite beautiful, even with characters and objects constructed entirely in Lego fashion. Most of the backgrounds are more realistically rendered, but even in such cases the simple Lego characters and props merge seamlessly with the backdrops and never feel at all out of place in the world they inhabit. 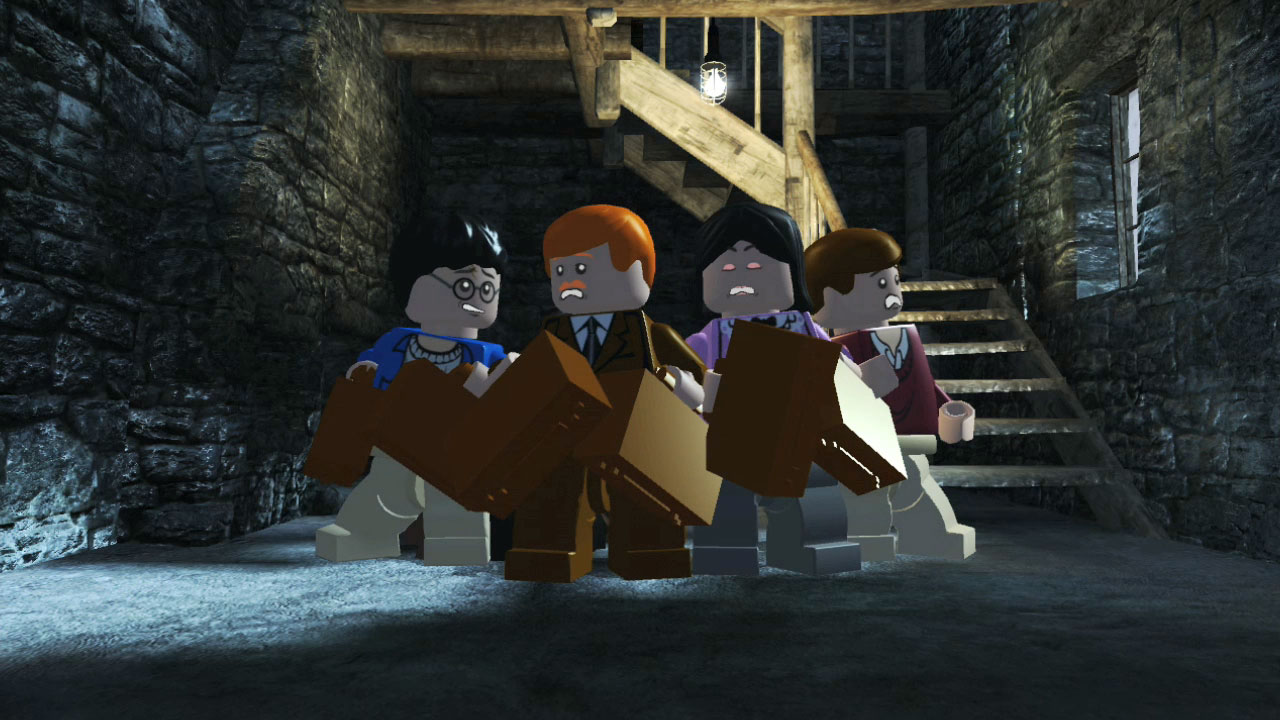 The animations and cut-scenes are both charming and humorous, and have always been one of the hallmarks of the Lego games. Some complaint could be given to the ambiguity of certain scenes, as everything is conveyed through simple pantomime and can be at times a little hard to follow. However, given that this is most likely not going to be anyone’s first exposure to the world and story of Harry Potter, I doubt that it would be especially perplexing to anyone playing this game.

The gameplay is where I have the most complaint, though I still found much to enjoy about this title. Ultimately, I feel that this is one of the stronger if not the strongest entry in the Lego games series, but it is unfortunately somewhat marred by not feeling wholly original in its approach. Not that I can necessarily fault Traveler’s Tales for keeping a formula that’s worked pretty well so far, but it’s hard to shake the feeling that this has all pretty much been done before.

As you progress through the game, you’ll play through various scenes from the first four Harry Potter films, somewhat modified or expanded to make what may be a fairly short event into a full level. The level designs are mostly pretty clever, though also fairly short and simple, relying on puzzle solving to expand out the length of time you’ll spend on any individual stage. Of course, the main thing that will slow you down is taking the time to collect Lego studs, the game’s currency, which is used for purchasing everything from extra characters to special cheats and bonuses.

There are all together a total of 24 stages or chapters, separated into 6 stages for each of the four “years” that the game consists of. At the end of the final chapter for each “year” there is usually a boss fight, which consists mostly of the standard “3 hit formula” of classic platformers. These boss fights, while fairly simple in nature, still provide enough of a challenge to be both fun and engaging encounters. 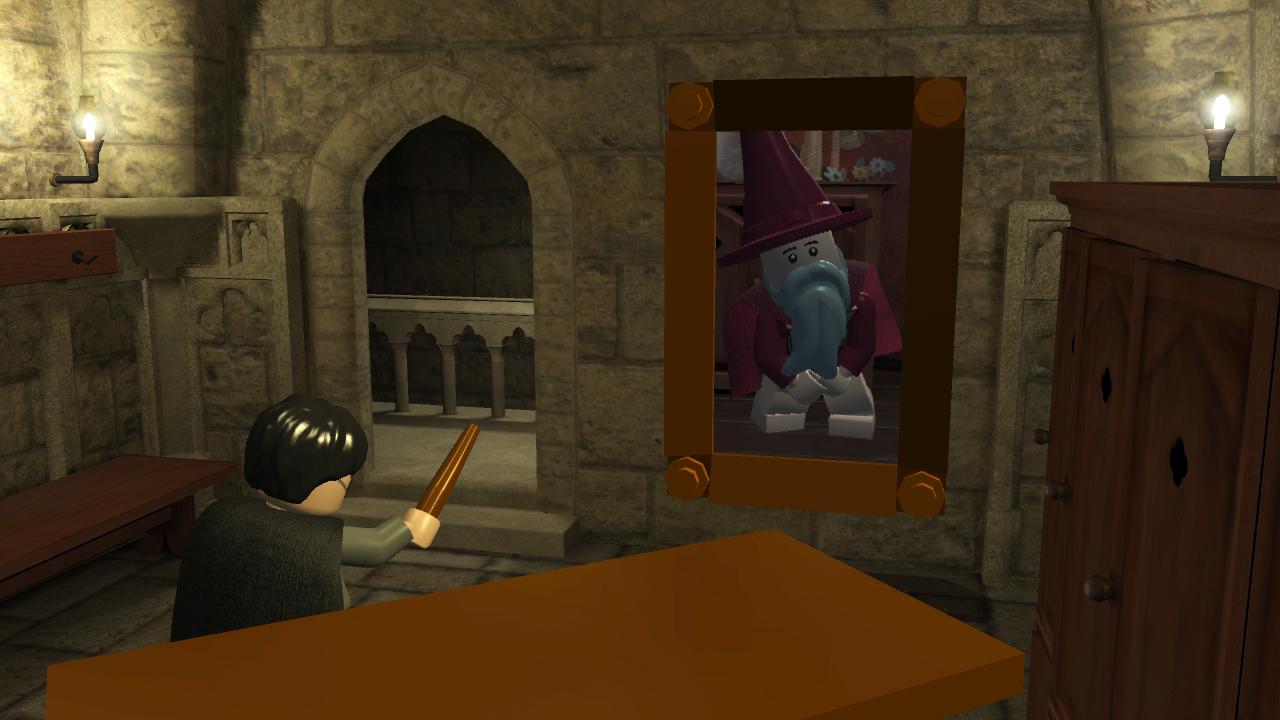 Outside of playing through individual story stages and exploring Hogwarts, the game requires you to at certain points to enter one of the classrooms at the school in order to learn new spells or potions. Spells are the big draw of this entry in the Lego series, offering new and interesting ways to interact with the environment or other characters, as well as dealing with troublesome enemies. Many of the spells you learn are required in order to successfully complete upcoming levels, though they are also useful in creating or destroying objects in order to acquire more Lego studs, or for causing mischief.

All in all, while it might be expected that a game based around the Harry Potter license should have spells, they are still a nice touch, and add a lot to the fun factor of this game. There can be a problem sometimes with aiming spells to hit exactly what you want them to, but this is usually just a minor annoyance, and doesn’t critically hinder gameplay. Some attempt to remedy this is made with an aiming system of sorts, but it can at times feel sort of sluggish and unwieldy, and it is fortunately not often required in order to hit your mark, due to a sort of auto-aim feature incorporated into the game.

Some of the puzzles and challenges in the game require you to assist or be assisted by one of the AI-controlled characters; though at such times you may be able to simply switch characters in order to solve the puzzle and progress. At other times, however, there is no getting around relying on the AI to help you solve a puzzle or get over a gap. Fortunately, the AI usually knows what it is you are trying to accomplish, so it isn’t a terribly big hassle.

All the same, it may be best to play with a friend or family member, and it seems that this may be the way the game was meant primarily to be played. Happily a lot of the frustration of accidental deaths that plagued former Lego games is remedied by the use of a very clever split-screen, which only pops up when one player moves too far away from the other. This prevents one player from moving ahead and dragging the other player with them and potentially into a pit or gap. 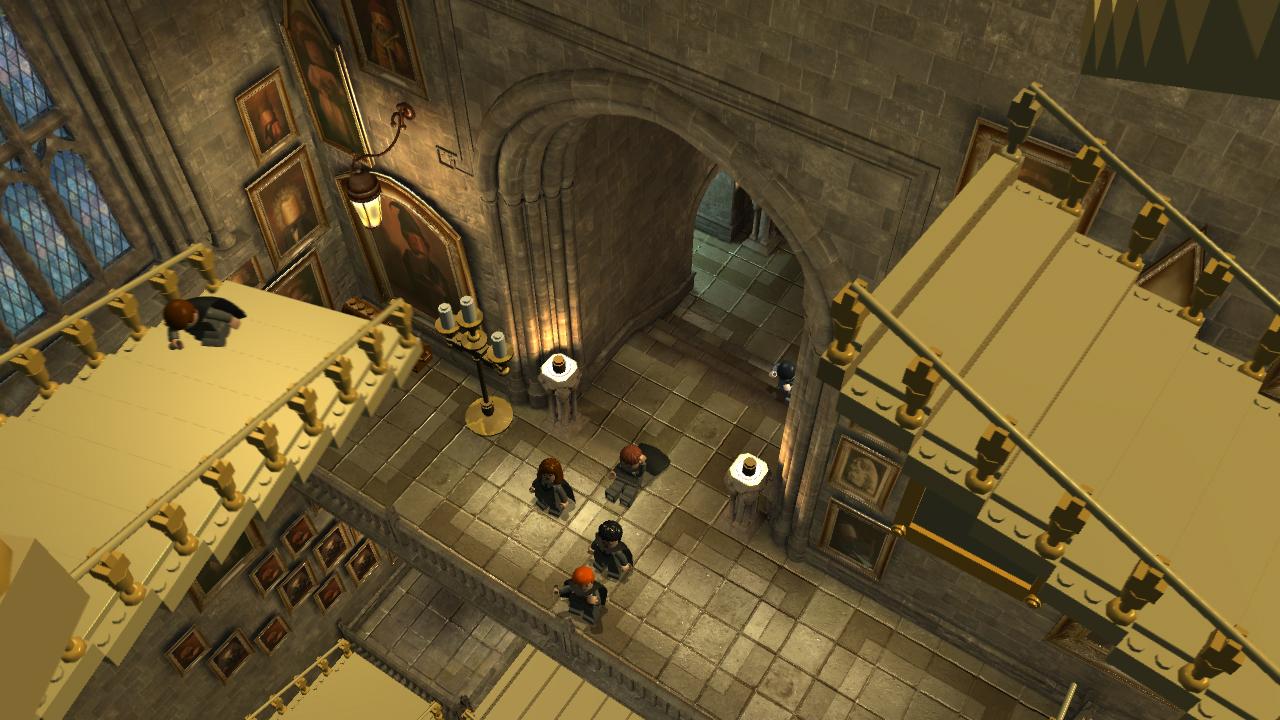 Despite the enjoyment of playing through the Harry Potter stories, the game becomes most engaging once you have played through the story and have acquired more or less all of the spells. This is where those aching to get 100% completion will want to explore and examine every nook and cranny of Hogwarts, in order to look for hidden secrets to access additional playable characters, cheats, and bonus levels. It will be also necessary to replay story stages in “Free Play” mode, which allows you to select any character you have unlocked and purchased in order to access hidden areas or secrets that were previously off-limits.

In the long run, while Lego Harry Potter may lack some originality, it can still be a blast to play through if you have the right mind-set. There are some nice and well-thought out changes and improvements from past entries, and if you’ve enjoyed the Lego games so far, and are a fan of the Harry Potter stories, there is a lot of fun to be had here. Just be aware that if you’re not an avid fan of collecting things inside of games, and aren’t going to strive to achieve a 100% completion rate, the enjoyment from this game may be somewhat short-lived.

Our ratings for Lego Harry Potter: Years 1-4 on Xbox 360 out of 100 (Ratings FAQ)
Presentation
81
Solid visuals and charming cut-scenes make this game a pleasure to look at, though the simplified Lego characters and objects may not appeal to some players.
Gameplay
69
Some nice improvements are made on the standard Lego formula, but it's never quite enough to get over the feeling that this has all been done before.
Single Player
72
Even though the main appeal is to play through a Lego-fied version of the Harry Potter stories, you'll only get the most out of this game if you're aiming for 100% completion on everything.
Multiplayer
75
Comprising of only 2-player co-op, this really feels mostly how the game was meant to be played, though the enjoyment here may mainly depend on who your partner is.
Performance
84
The game has an excellent framerate without a hiccup in site. There is an option for V-sync and motion blur, but I wouldn't recommend using it.
Overall
71
If you've enjoyed past Lego games and the world of Harry Potter, then you'll probably enjoy this game, but if you're not a fan of either, there's possibly not much to hold your interest here. 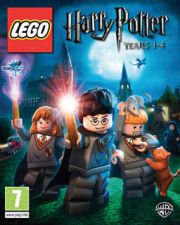