It will probably come as no shock to anyone that this year’s college football outing will seem suspiciously similar to former entries in the series, but obviously some consistency is to be expected. After all this is still college football. However, despite similarities this year’s installment may have with past versions of the game, what it changes or improves upon will certainly be a motivating factor for anyone considering purchasing this game.

Visually, of course, the game looks great. Graphics are solid, and the animations for both the players as well as the people in the crowd are really quite impressive. Sound design is also top notch. From the general ambience of the crowd to the announcers’ commentary, to the bone-crunching sound of a hard collision, it all mixes well with the visuals to truly immerse you in the experience and make your victories more exhilarating and your defeats more heartbreaking. 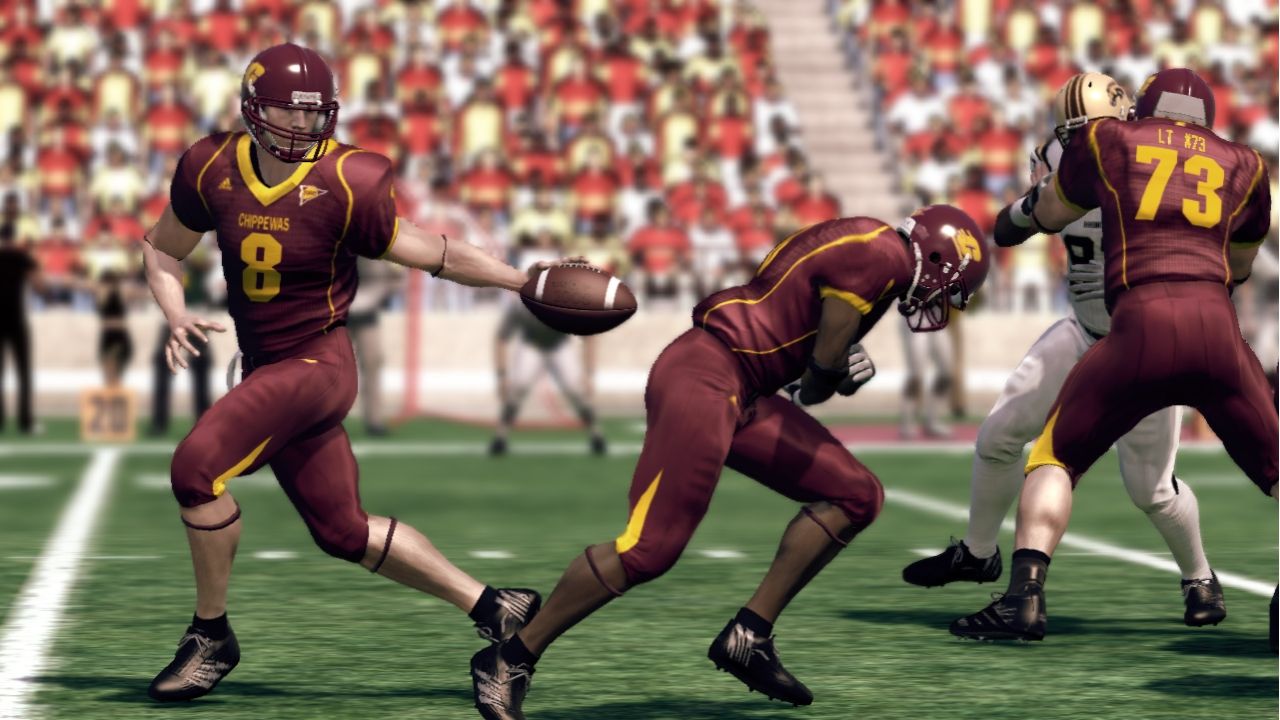 Your basic gameplay is probably the area where the least amount of changes has been implemented. All the controls are more or less the same, as well as many other aspects of gameplay. The benefit of this for fans of the series is that it is not too terribly difficult to pick up the controller and get back in the game, with very minimal adjustment. There are a few welcome improvements to the formula, though, which may be a strong motivational factor for those interested in picking up this newest installment.

The playcalling interface is a snap to use, providing you with a handful of quick suggestions of possible plays for any given situation, or allowing you to easily expand your options with a simple click of the right stick. Ultimately, it provides a quick and easy way to find exactly the play that you’re looking for. I will acknowledge though that at first navigating the “advanced” playcalling screen can seem a somewhat daunting task, but it’s really just a matter of practice, learning what category headings to search under to find what you’re looking for. Also added is the ability to still select your plays even when calling a “no huddle offense”, which is a welcome improvement, especially when time on the clock is winding down quickly.

The one minor complaint I might speak of, not unique to this particular entry, would be that controls are a bit overwhelming. The main problem is simply that it can be difficult to always remember every possible button configuration and its corresponding action. There is, however, an attempt to remedy this somewhat in the form of a new version of basic exhibition play called “1-button mode”, which simplifies everything down to using just the A button as a context-sensitive “do everything” button. However, this presents the problem of limiting your available options and strategy when you’re in the middle of running a play, and it is at any rate only a viable control scheme for the one game mode, which makes it kind of useless if you intend to play any of the other game modes.

Single-player includes your basic game types such as exhibition, practice, mascot, and the above mentioned “1-button mode”, as well as the more expansive and lengthy dynasty and road to glory modes. Exhibition or “quick play” is just a simple, single game of football, which you can play by yourself against a computer controlled team, though it is also good for local multiplayer against friends or family members, while practice mode is a good way to get used to the controls as you work on perfecting individual plays. The mascot game mode, essentially the same as exhibition, but with players wearing mascot outfits, I found to be really just silly and kind of pointless, and the special mascot move, a side flip of sorts, isn’t at all helpful, as it mostly just slows you down. 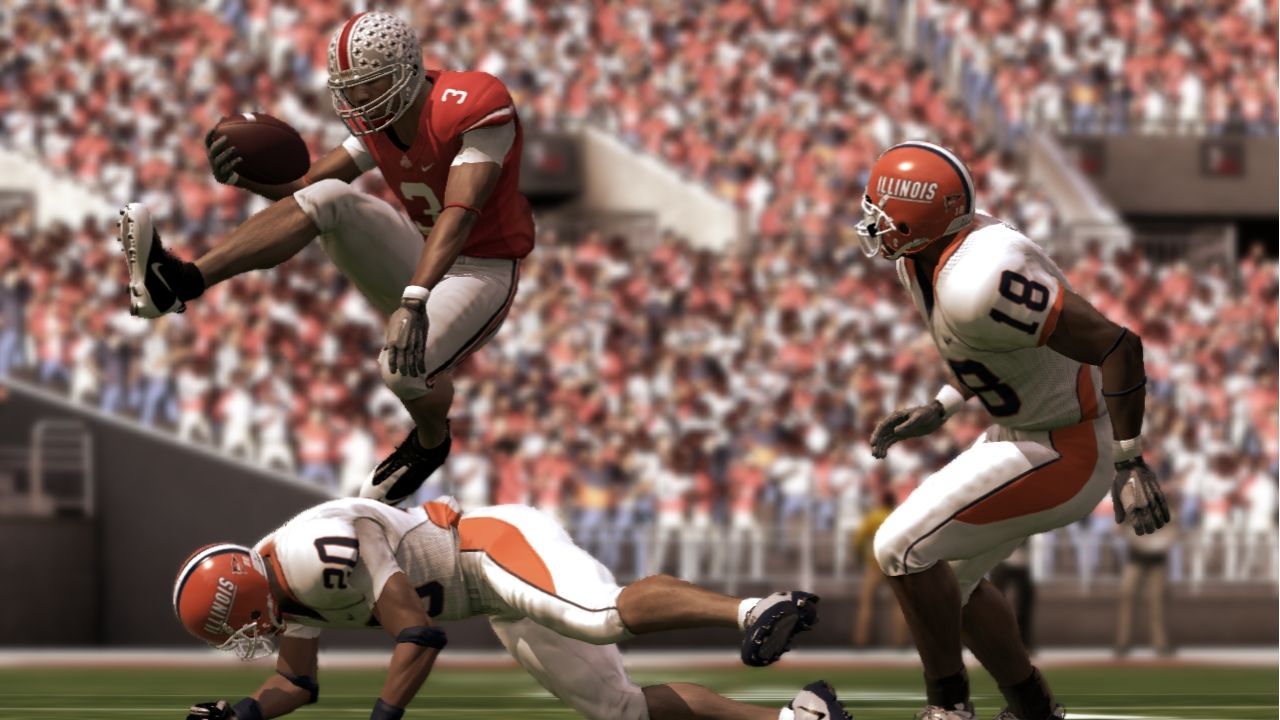 Dynasty mode is your main single-player “career” mode, allowing you to be the coach of one or many teams as you play through multiple seasons of college football. Outside of playing (or simulating) games, you’ll have to manage your team rosters and playbook, as well as scout out potential new players to fill your ranks, making phone calls to said players to try and convince them that your school’s team is the one they want to play for. I must say I found the “phone call” feature to be fairly enjoyable, and certainly there is enjoyment to be found in all of the various micromanaging options available. However, if that’s not your cup of tea, the computer can automate all of these finer details for you.

“Road to Glory” mode tasks you with creating a player from scratch, choosing the position you’ll play, and then striving to perform to the best of your abilities as you make your way from the high school playoffs all the way through your college career. Outside of playing through the season, you’ll participate in practice exercises as well as spending your evenings doing one of various activities designed to improve your skills. Along the way, your career will be highlighted as your triumphs and victories are showcased in special reports and updates featuring ESPN’s Erin Andrews. All in all, it’s a very enjoyable mode, and it’s kind of nice to focus on only playing the one position and not having to worry about anything else for a change.

Local multiplayer is mostly what you’d expect, allowing for up to four players to play with or against each other on the same system, utilizing essentially any of the “play now” game modes. This is usually the kind of multiplayer I enjoy more and have more fun with in sports games, but you can also of course take to the field online using either an official team or one you create yourself using the game’s “TeamBuilder” feature. Your created team can actually be used for a variety of different modes, but how you go about creating a custom team is sort of unwieldy.

“TeamBuilder” is not handled within the game itself, actually, but instead done by going online to a branch of the EA Sports website set apart for that specific purpose. This is really kind of an odd set-up, and I see no good reason why this feature couldn’t be handled inside of the game itself. The only real advantage I see to this method is not using up space on the console's hard drive, as it saves your created teams on a remote server. Also, though, other players can vote on your created teams or download them to use as well. Why this still couldn’t be the case while allowing for creation of teams through the console itself is beyond me. 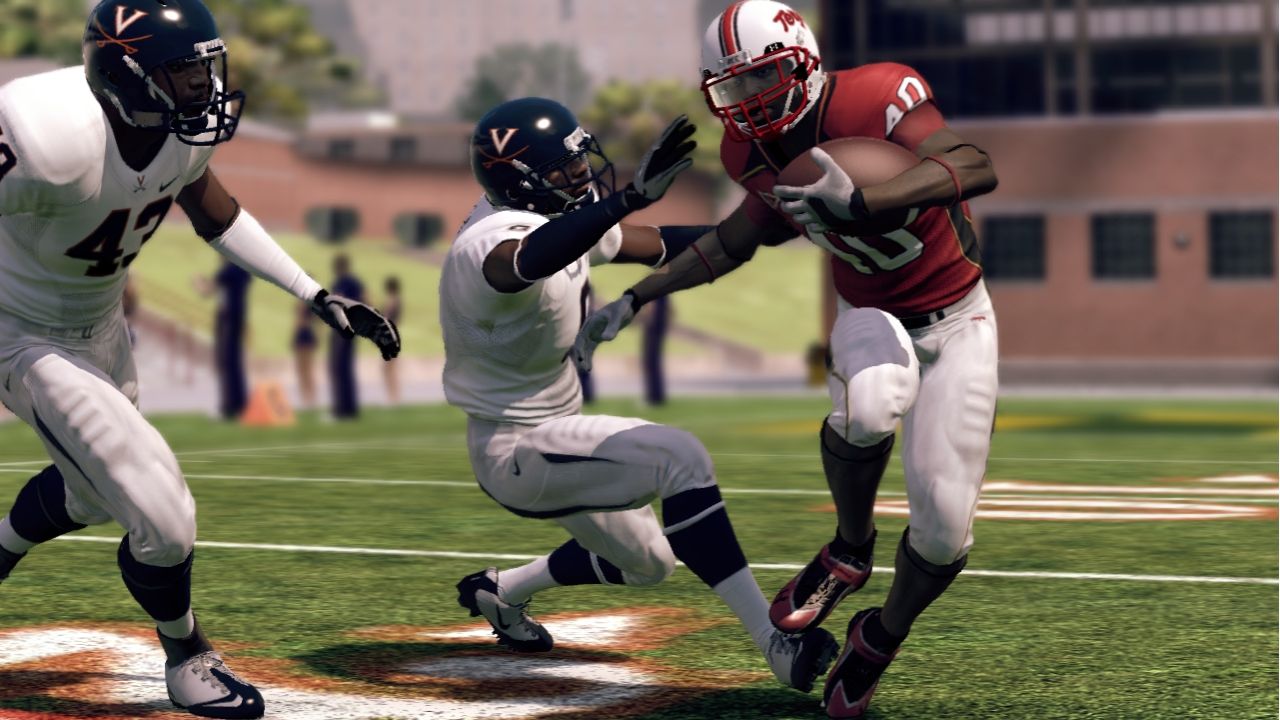 An interesting new addition to the multiplayer is being able to now play dynasty mode online. In such a case, though, it seems like the best idea is to play with people you actually know in real life, so that you can be sure when they’ll be playing, and wait to sync everyone’s schedule accordingly. Indeed, most of the games that I found while searching for an open slot to join we’re labeled as “private” games. I imagine this is in large part due to having to wait on the “commissioner” (host) player having to advance the week before the season can continue, though also I can see the complications that could arise from being scheduled to play one of the teams controlled by another player.

When it all comes down to the wire, I’d say that, if you don’t currently have a version of NCAA Football, this is the version you should get. It is certainly one of the best versions of the franchise I’ve yet to see, and I especially love the relative ease of the playcalling interface. But for those of you who may have a previous version of the series, I still highly recommend this one, but you’ll have to weigh for yourself whether or not the added game modes and other improvements are worth the $60 price tag.

Our ratings for NCAA Football 11 on Xbox 360 out of 100 (Ratings FAQ)
Presentation
85
Solid visuals and sound create an immersive experience that will have you cheering along with the digital fans
Gameplay
79
Much the same as former NCAA titles, but that's not necessarily a bad thing, and the playcalling interface is fantastic
Single Player
80
None of the 'quick play' game modes are particularly thrilling, but Dynasty and 'Road to Glory' are engaging enough to keep you playing for quite some time
Multiplayer
75
Playing locally with a friend beside you is always fun, but you can take your games online if you want more serious competition
Performance
87
Good framerate during plays, with only a little bit of occasional slowdown during pre-scripted crowd and player animations. Menus can be somewhat sluggish at times
Overall
83
NCAA Football 11 is probably the best entry in the series so far, and the additional features are nice, but a lot of what you get isn't exactly groundbreaking. 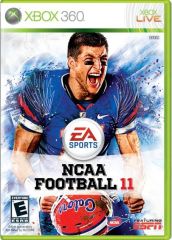