There is no question that the multiplayer for the new incarnation of Medal of Honor borrows some ideas from Modern Warfare 2 and Bad Company 2. The success of this combination is limited because MoH drops almost all destruction from BC2 but still retains the somewhat clunky movement. MW2 was partially successful because it was an extremely smooth and refined experience, it packed in loads of unlocks and game modes providing solid play even after repetition. Medal of Honor is set during the War in Afghanistan making it your basic modern day shooter with weapons most first person shooter fans will be instantly familiar with. The MoH beta includes two maps and two modes: Team Assault on Kabul City Ruins (deathmatch) and Combat Mission on Helmand Valley (rush / assault) 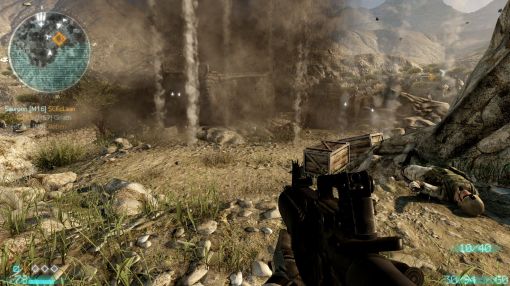 A Mortar strike cracks into the ground around an objective.

Team Assault plays out like most deathmatch modes in other games with a few basic differences. Players usually spawn into the zone in the corners of the map and an effort has been made to try to spawn players with their team mates, in this way similar to Modern Warfare 2. This does tend to break down once player counts reach 16 or more because of the frequency of spawning. You may spawn behind or in front of an enemy in more central areas of the map. The game still retains much the same feel from Bad Company 2 and this means the movement is somewhat clunky. Moving quickly away once under fire is certainly more difficult than it should be. Players can die falling only a short distance or will lose the ability to sprint away from combat. Even still it’s fairly satisfying to move through levels taking down enemies from a range and hearing them scream out in pain.
With Deathmatch you will get a taste of the killstreak rewards (called a scorechain) in the beta. Strictly speaking you don’t gain access to the rewards by killing enemies alone, you gain them from points acquired. Extra points are rewarded for headshots, savoir and revenge kills, kill assists, objective captures or even melee kills. Even still you are going to be getting most of your points just by killing enemy soldiers. Once you achieve a certain score you get access to a mortar strike or intel then later items like rocket strikes come into play. There are crowded areas that restock ammo and some chokepoints but the use of the scorechain bonuses isn’t abused in deathmatch because enemies can be anywhere around the map.
Helmand Valley (combat mission) presents a different case for these scorechains. The combat mission plays out pretty much identically to the Rush gamemode in Bad Company 2. The fighting occurs over a smaller area and consequently scorechain attacks can be targeted with incredible effectiveness. The offensive team moves forwards, plants a charge or captures an area as mortar strikes and rockets crash from the heavens above. The attackers also occasionally get access to a light tank vehicle that seems to have been taken straight out of BC2. 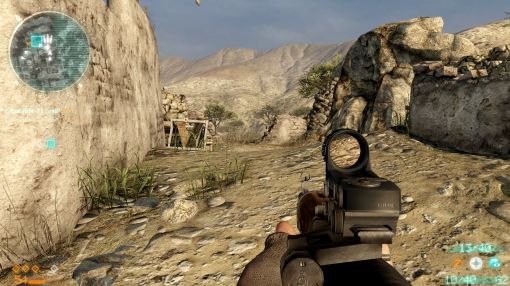 Even without squads the attackers can spawn on the front lines behind teammates. Although sometimes deploying in on the front actually seems to mean deploy on a sniper hiding in your base. When it does work it makes the downtime for action very small unless you prefer to spawn in your base to attack from a distance anyway. Once attackers get a few kills under their belts they can call in a strike from the air to decimate the defenders who will be crowded around the very tight objectives. Defenders will rejoice because the chokepoints around some objectives in this map are tiny.
123Next