Not everything in the MoH Beta is a disappointment as there are quite a few nice features that come through from BC2. The sound and explosions are still high quality, mortar strikes and rocket strikes do look very awesome from a distance. The weapon handling feels pretty good just like the latest Battlefield game. Occasional voice chatter can be overheard during gunfights with lower player counts and when performing certain actions helping you feel a bit more a part of the world. It’s nice to hear confirmation your mortar strike did some damage from an anonymous radio voice too. 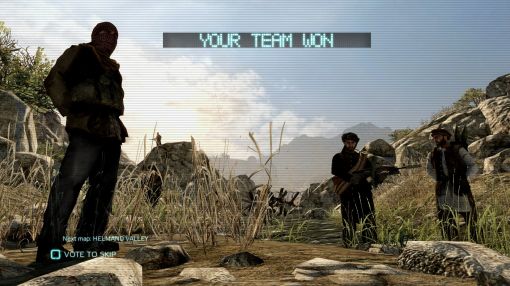 Yes we won, but camping chokepoints isn't that satisfying.

With fewer players in deathmatch the games can get quite strategic with footsteps and map knowledge playing an important role. Deathmatch modes are usually less appealing to me in games but I certainly enjoyed it more than the combat mission. In both deathmatch and even during the combat mission you’ll also be back into the action in only a few seconds after dying so you won’t be waiting for very long after a tragic death.
Medal of Honor multiplayer does lack the smooth gameplay and the quick movements of Modern Warfare 2. Occasionally I got caught on small rocks or objects that should not have impeded player movement at all. It also lacks the destruction and impressive graphics of Bad Company 2. The included deathmatch map is designed well enough to provide a fairly good continuous battle throughout matches and on several replays. Sadly the combat mission map is just littered with too many chokepoints and the gameplay deteriorates with constant mortar strikes drowning out the rest of the sound and combat. 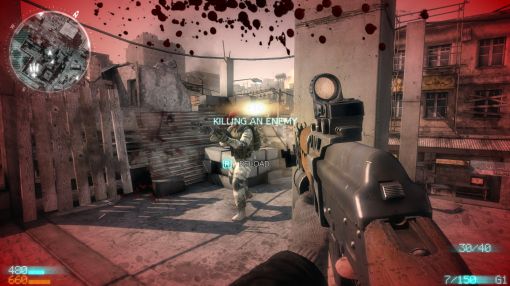 Only 10 more points before I get a Mortar Strike!

None of the problems in the Medal of Honor Beta are unrepairable; it’s just there are quite a few problems both from a gameplay and presentation standpoint. There is some fun underneath with some good strategic fire fights and mostly satisfying gun handling. Some different game modes could bring more enjoyment to the surface and a range of different maps might offer a more balanced battlefield. I’ll be following the game closely over the next three weeks of the beta period and will be waiting to see how much has changed come October.
Prev123