The chokepoints are smaller and closer together than any Bad Company 2 Rush map and it does seem to impact negatively on the game in both big and small player numbers. The chokepoints are especially bad because there is little foliage to cover your approach and almost no dust (good news) without explosions. The objectives require attackers to proceed through narrow openings each with clear views from defenders. Small player numbers means fewer distractions for defenders so they can easily see attackers move forward. Once player counts get large the constant barrage of scorechain attacks around the objectives kick up dust and allow the attackers to continually spawn on each other to win by attrition. 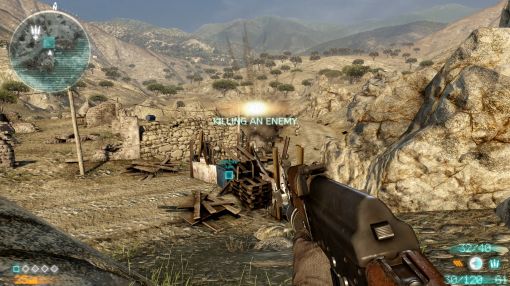 If you thought this was another chokepoint, you'd be right!

The recoil in the game is limited, even at long range full auto of weapons will be pretty accurate. Sniper rifles are still useful due to damage, some bolt action rifles kill in one shot and it’s very obvious when you are under fire from a sniper. The speed of the game is faster because of this low recoil, talk of increasing recoil of some weapons may balance things but it could also make encounters frustrating. Splash damage from explosives is also quite limited, the noob tube (grenade launcher) is present but you have to land it fairly close to get a kill. Even grenades, which are not the smooth to throw, have to land be pretty close to kill an enemy.
Although Medal of Honor multiplayer uses the Frostbite engine (Battlefield: Bad Company 2) the destruction is extremely limited. Trees will fall down and crates can be destroyed but the majority of the large objects in the world, like buildings, are static. A few cover points with rocks or bricks can be ruined with explosions but it doesn’t change the gameplay much at all like the previous DICE game. Using the Frostbite engine without the excellent destructive capabilities seems like a strange decision but perhaps it was done to reduce the system requirements.
Players will receive upgrades on a per class basis that will assist in combat scenarios. Sniper, Rifleman and Spec-ops all behave in a similar way in combat in that they all feel like an assault class. Even the Sniper is relatively successful in short ranges due to the high damage. Each class must be played a certain amount to unlock the same items that you probably already unlocked for the other classes. Basic unlocks include extra clips, red dot sights, hollow point ammo and silencers and at this stage you cannot pick up weapons from dead soldiers. 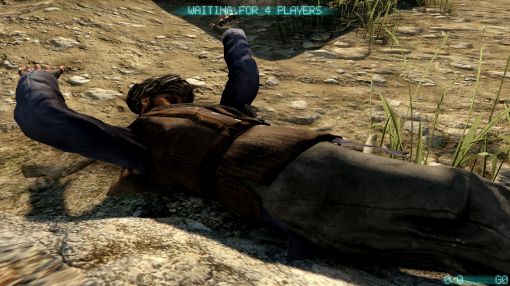 Yes my character died, but he's still celebrating with his hands!

Of course being a beta there a number of bugs and presentation issues that may or may not be fixed prior to release. The player models in particular look very poor and the ragdolls associated with their death are horrendous. A recent server patch seemed to reduce the frequency of them attaching unduly to the walls and twitching about. Ragdolls will sometimes pop into the air or get pushed backward unrealistically from a bullet to the head as though they’d been hit by a freight train. They may even rematerialize out of thin air from a victim killed many seconds ago as you move around the map.
There are dedicated servers but the server list is pretty unresponsive especially when joining a server. There are no pings listed once you are in a game and you can’t actually change any settings or exit the game without first spawning into the battlefield. Using the text chat is potentially very dangerous as it can completely freeze the player, death the only cure. There is no doubt some of these bugs are representative of a beta product and many little problems should be fixed in months if not weeks. Even still some perspective should be placed on this being open to the public for anybody who pre-orders the game.
Prev123Next