As a big metroidvania guy, GRIME is something I had my eye on for quite some time. With its mysterious world, and promise of challenging gameplay, it had the makings of something I could really sink my teeth into. As a mostly console gamer, though, it's been a bit of a wait for the title to finally make the jump over from PC exclusivity. Over a year after it first debuted, the game and its recently released update Colors of Rot have finally arrived on additional platforms. 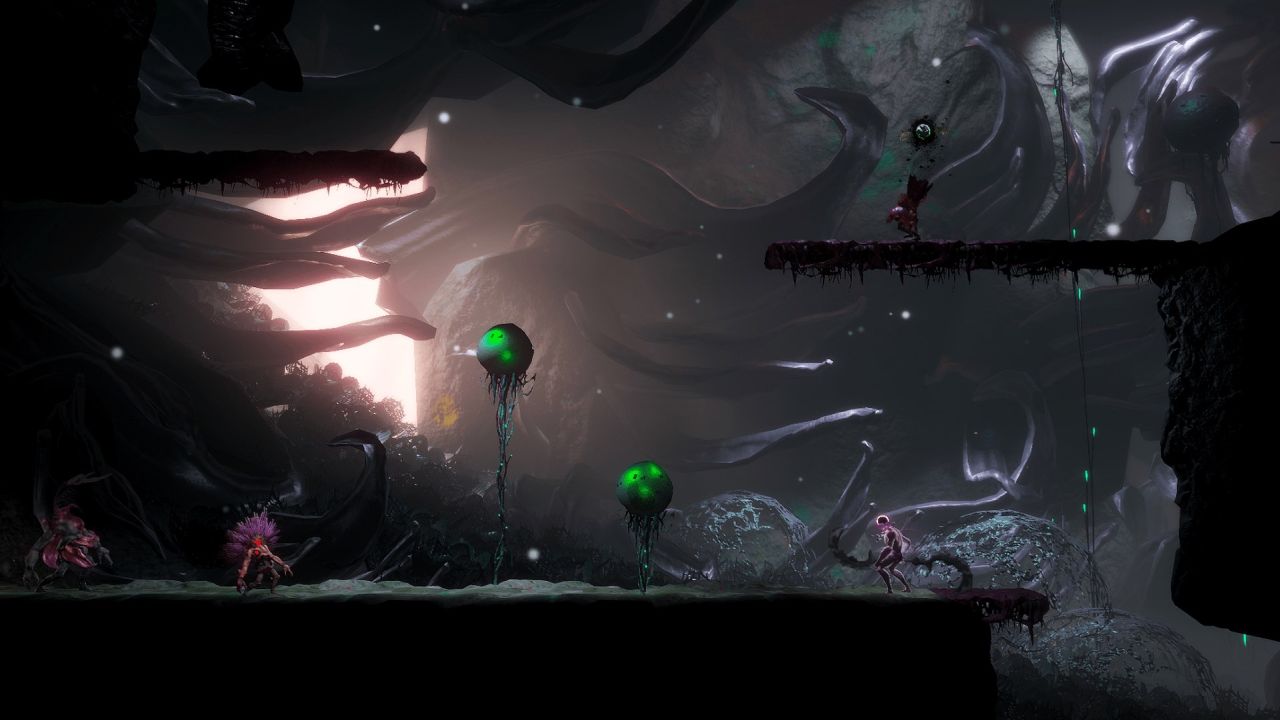 Once you reach the first enemy in this 2.5D RPG, you'll realize just how difficult the journey ahead will be. It only takes a handful of hits for you to perish, so getting enemy attack timing down is crucial. The most important trick in your arsenal, even more so than the weapons you acquire, is learning how to parry. It serves as a way for you to remove enemy shields, damage bosses and if you lower a foe's health enough, absorb them into you. As you absorb enemies, a side-meter will fill up than when completed, will let you heal a significant chunk of health bar. The downside to parrying is that with such a tight timing window as the one here, it's easy to mess up. And if you mess up, you are wide open for a pummeling.

Outside of parrying, combat is straightforward enough to immediately draw you in. Attacks come in the form of weak and strong swings, and these both require a certain amount of stamina. There are dozens of different weapons for you to find, with each of them having different stats, weight, and level of use. A gigantic club may be able to dish out significant damage, but its size makes it much slower to use. Side items are mapped to the D-Pad and come in a variety of options. I opted to split my selections between attack items, including a nail that can be thrown like a dagger, and defensive items, such as dust that boosts my absorption ability. 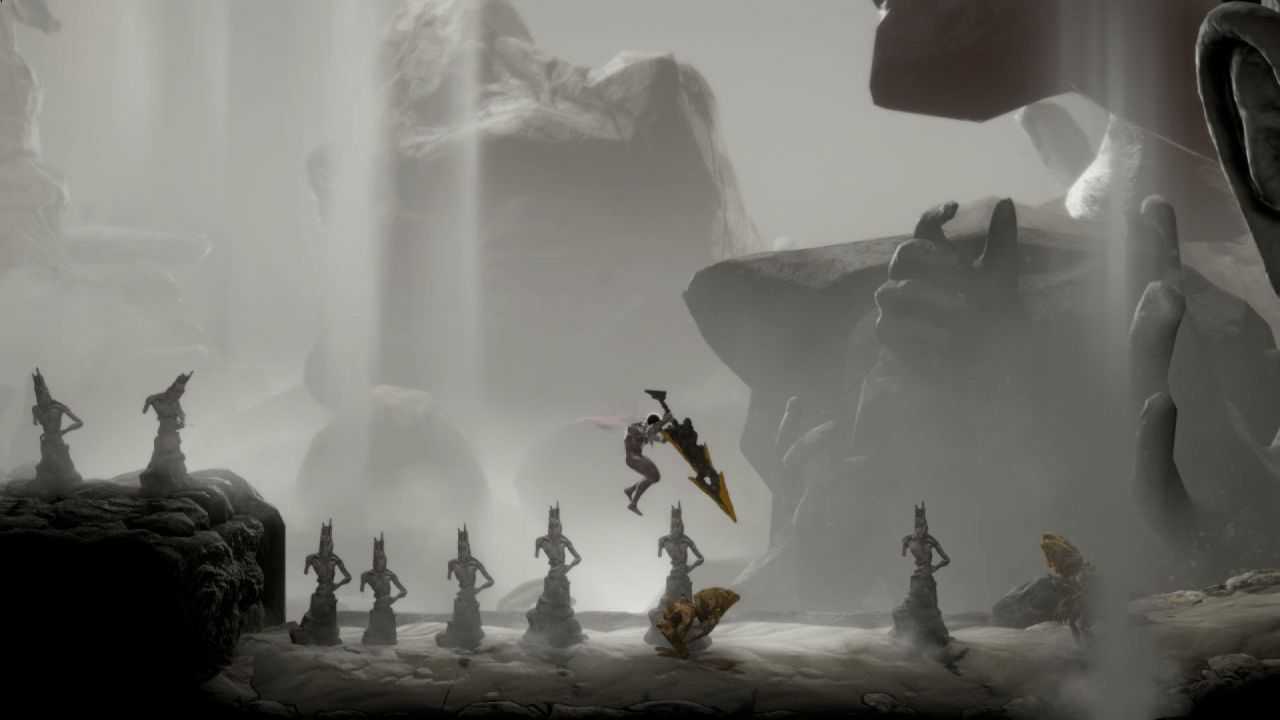 As simple as it can be to learn, GRIME is still an incredibly difficult game. I have died so many times and in so many different situations. Regular enemies, gigantic bosses and platforming hazards have all felled me countless times. A lot of time my deaths came down to not properly managing my stamina. Stamina comes into play with just about every action you take, from parrying and dashing to swinging and throwing. I do like a challenge, but I will admit that the limited stamina can make the platforming sections a little too harsh at times. It's a tough game, but one that provides immense satisfaction on making it past a particularly challenging section.

It also helps that all is not lost upon death either. As you kill enemies, collect items and smash objects, you'll collect mass. Mass serves as the currency used to level up your base stats such as health, stamina, and weapon proficiency. When you die, you do not lose the mass collected on your most recent run. You respawn at the last surrogate, which is the title's version of Dark Souls' bonfire, and can then level up right from there. You're always making progress in the game, even if it doesn't always feel like it. 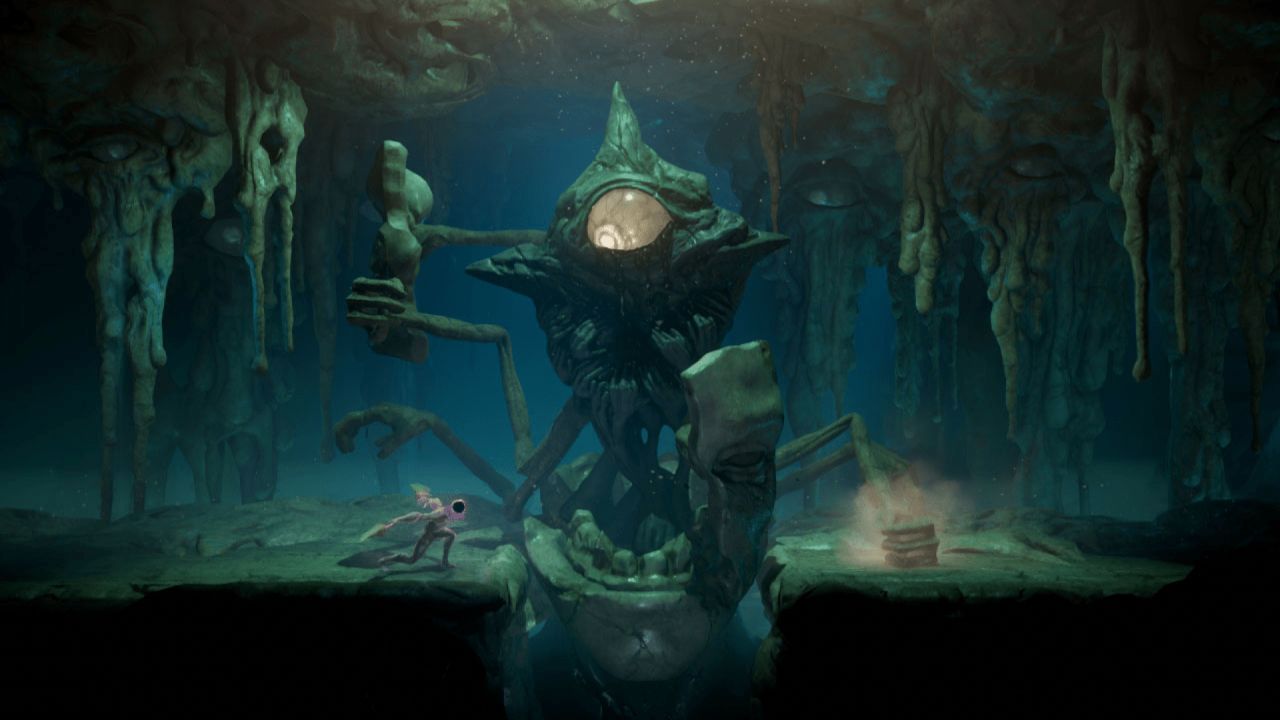 It's good that the gameplay of GRIME is engaging as it is, because the story is rather obtuse. At the start of the game, you are conjured into existence, and forced to drag your body around until it fully forms. The world you are thrust into is one that is obsessed with the body, and the various perfections and imperfections with it. Aside from your black hole head, you have been blessed with a chiseled body that inspires awe and jealousy. Things just get weirder and weirder as you explore the surreal world of the game. I don't mind having to do the legwork to learn more about the plot and world, but this one almost lost me entirely. Some of the conversations you have with NPCs are funny and insightful, but more often than not, I was just looking forward to a cutscene being over.

The focus on the imperfections of the body can be seen in the grotesque art style of the game. The backgrounds are full of slimy and gross details that really hammer home how much of a waking nightmare you appear to be in. It's all very wet, which is the most disgusting visual flair if you ask me. The various enemies you come across fit right in with the off-putting visuals. As opposed to the sculpted body of the player character, the enemies are bumpy and awkward. They are purposefully unpleasant to look at. 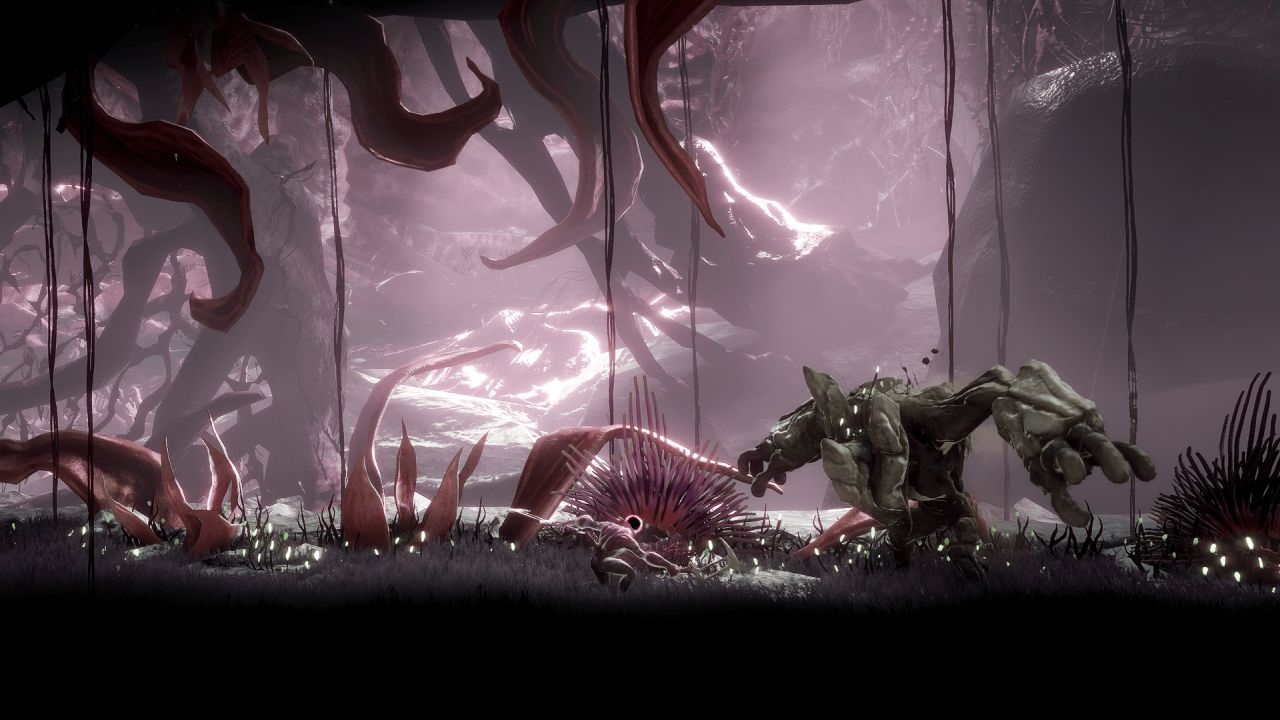 However, there are moments of beauty to be found as well. Lairs filled with splashy colors, and bosses that are epic in scope. The console release of the title comes with the new Colors of Rot expansion, and the new area featured, Childbed, is one of the more vibrant looking locations. The sound effects of GRIME add a lot to the surreal presentation as well. Unpleasant groans in the dark, scurrying creatures and unintelligible dialogue make for a weird listening experience. The orchestral soundtrack is solid but doesn't feel as unique as the ambient sounds of the game. The boss battles tracks are excellent, though, so even with dying a lot, I never got annoyed at the music.

Deliberately off-putting and difficult, GRIME is not for everyone. The plot is difficult to decipher, the world is gross and wet, and the gameplay is brutally tough. I wouldn't blame people for bouncing off of it fairly early into the campaign. However, those that stick with it will be rewarded with one of the better metroidvanias in recent memory. The art style may be off-putting, but uncovering the mysteries hidden around the world is great. The combat may be difficult to get a handle on, but it offers excellent variety, and rewards those that take the time to learn its nuances. Even if I never got fully invested in the story, the wild world and fantastic gameplay always kept drawing me in.

Our ratings for GRIME on PlayStation 5 out of 100 (Ratings FAQ)
Presentation
80
The world of GRIME oscillates between moments of beauty and horror with ease. The dirty world of the title might be unpleasant to look at, but it's hard to deny that it isn't captivating.
Gameplay
82
Consistently challenging, the gameplay of GRIME isn't for everyone. The combat requires a keen sense of timing, and the platforming forces you to focus on keeping your stamina up. There are moments where the challenge borders on the unfair, though.
Single Player
64
I enjoyed exploring the world of GRIME, even if the plot didn't engage me. It's a little too abstract for my tastes.
Multiplayer
NR
None
Performance
85
No noticeable issues during my time with the title on the PlayStation 5.
Overall
75
Grotesquely designed and brutally challenging, GRIME is a unique metroidvania experience. It's certainly not for everyone, but those willing to dive into the title's dark world will find plenty to enjoy. 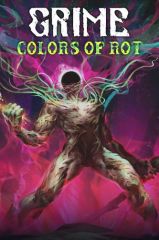