An asymmetric multiplayer title that falls flat in execution

There is a plethora of anime fighting and novel games out there, and although these genres suit the medium well, sometimes you just want to experience something new. Dragon Ball: The Breakers is an innovative concept, as it deviates from the plug-in formula we've become accustomed to for anime-related titles and has tried to capitalise on the recent trend of asymmetric multiplayer games. Even though using the beloved Dragon Ball Universe is an exciting idea on paper, especially as the series harbours some of the most badass and diabolical villains in anime history, its execution falls flat and leaves a lot to be desired. 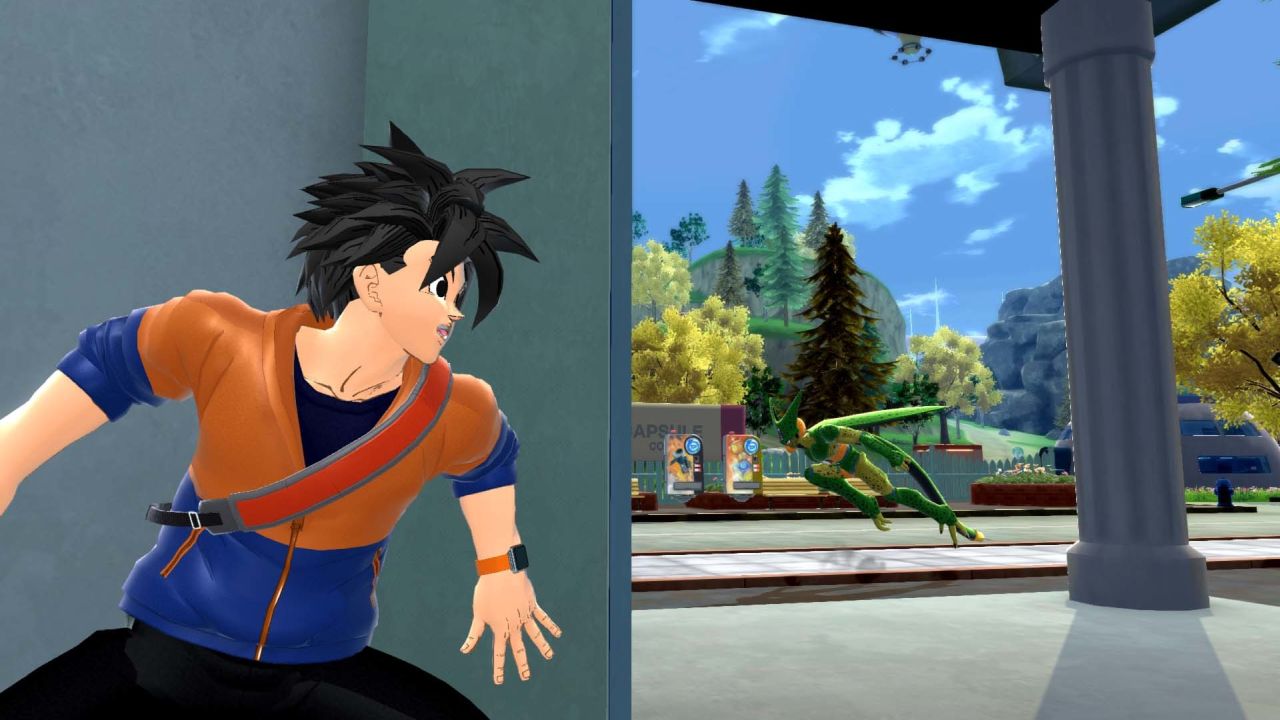 The game uses a match structure that consists of seven Survivors being dragged into a temporal seam, a random location in time and space, where they will have to use all their Bear Grylls skills to navigate the terrain in the hopes of escaping. At the same time, one solo player becomes a Raider, as one of three enigmatic villains from Dragon Ball Z with the goal of killing everyone in the surrounding area. If you've ever played Friday the 13th: The Game, it's highly similar regarding the survival dynamics and even gameplay mechanics. As a Survivor, you can play as a customised avatar or one of the civilian characters from the original Dragon Ball franchise, ranging from the cowardly pig Oolong to the young gifted scientist Bulma.

From a presentation point of view, the game looks remarkably similar to Dragon Ball Xenoverse 2, which is not the greatest graphically designed Dragon Ball game out there, but it definitely encompasses the Dragon Ball aesthetics. The Breakers also features some iconic sound cues from the franchise, but the overall soundtrack is dull as dishwater. In certain parts of the match, no music will play at all, and when the music finally kicks in, it's a bit lacklustre as it doesn't add any real, meaningful tension to important moments.

There is an optional prologue to play, where you meet everyone's favourite wormhole master from the franchise, Trunks, as he bestows his time patroller knowledge and introduces the player to some basic gameplay mechanics, which acts as the game's tutorial. Sadly, this wanna-be tutorial will not properly explain the winning requirements for a match as a Survivor, so it will take a few games to figure out how exactly everything works. If that is not bad enough, it provides no information whatsoever if you play as a Raider.

Before starting a match, you can set a preference of either playing a Survivor or a Raider, but as the game is 1v7, you won't get the Raider often. You can also pick your preferred map out of three locations, which are iconic landmarks from the series. However, it doesn't matter which site you select, as adventuring through these maps is an incredibly dull experience as you constantly run around in empty, open terrain environments or small caves which are incredibly bland-looking. After you've set your preferences, it will take about three minutes on average to find a match because of the small player base. What's more, when you finally find enough players to start a game, it will sometimes freeze on the loading screen, making the matchmaking process even more frustrating. 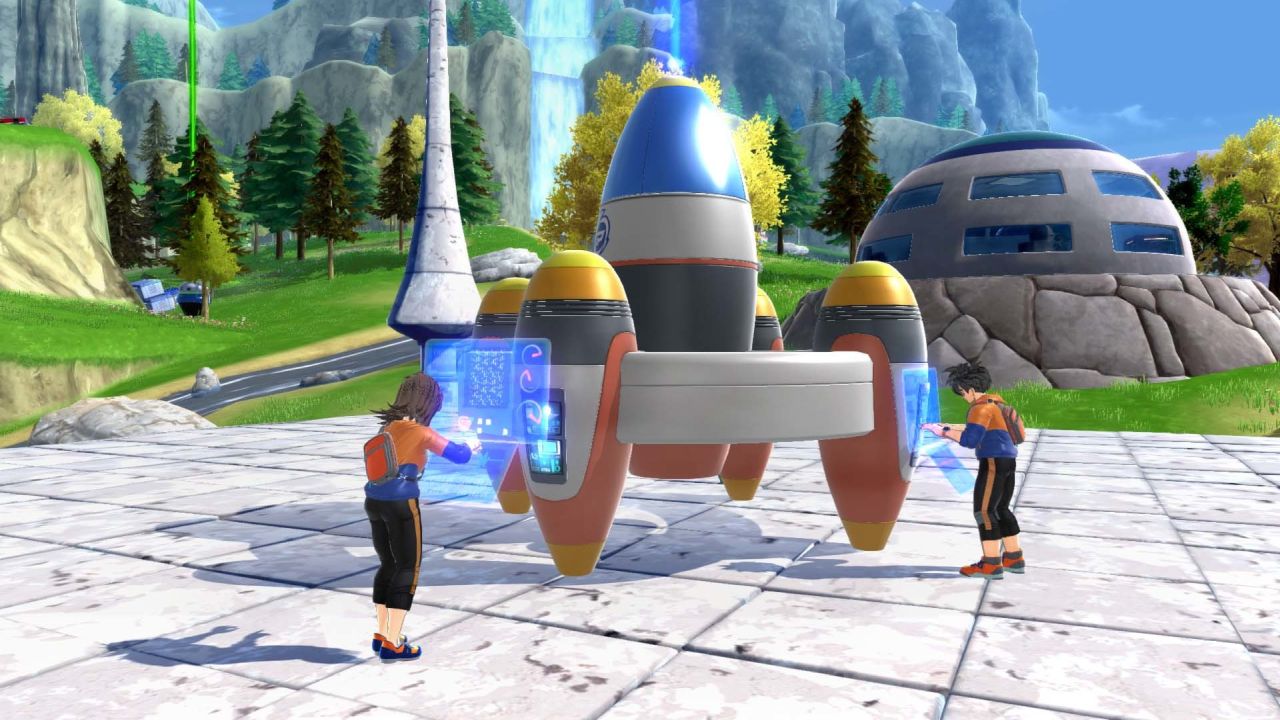 There are a few ways to win as a Survivor, but the most conventual method is using the Super Time Machine, which is a glorified getaway vehicle that would make even the most brutal wild west outlaws envious, as it will instantly make a speedy retreat out of the temporal seam and take all the remaining survivors to safety. To get the Super Time Machine to appear on the map, you'll have to find five different power keys labelled from A to E and then place the key in a corresponding location.

These keys are found by opening up boxes scattered across the map, which respawn in the same spot every match, so it's a matter of remembering where the boxes are positioned each time. Although what the package contains is randomised, sometimes it could be a power key or valuable items like rocket launchers that can momentarily stun a Raider. Sometimes near these packages, you can also find AI civilians, which you can save by going up to them, which is a worthwhile endeavour as the Raider can kill them to increase their power level. This leads to a good chunk of the game being discreetly walking through the environments, hoping the Raider doesn't see you while opening boxes, which can get repetitive, as you can play for a handful of minutes without anything significant happening.

Once all the power keys are locked into a site, the start-up system for the Super Time Machine will commence. From here, you head towards the location of the device and start booting up the system, which will leave you at the mercy of the Raider's attacks as you will be unable to move during this time, so you'll have to pick the right moment to make your move. However, if a Raider is successful in their efforts to destroy the machine, there is still a way to flee the temporal seam. A smaller but weaker device called the Escape Time Machine will appear on the map, which will help you make a last-minute getaway. One Survivor pilots the machine, and nearby Survivors can helplessly cling to the outside of the device.

Adopting various tactics at different points is probably the best way to win a game. For instance, when all the Survivors are trying to find the power keys, it's usually best for everyone to disburse across the map because it will increase your odds of finding the keys, and it will be much harder for the Raider to pinpoint your location. In contrast, when setting up the Super Time Machine, it's often better to band together and even, on occasions, use yourself as a sacrificial lamb by attempting to be a diversion so the Raider does not attack the Survivors or destroy the Super Time Machine itself. However, unless you are playing with a group of friends, it's impossible to portray these notions to others, as you can only communicate by stickers, which kind of takes away from the tactical element. 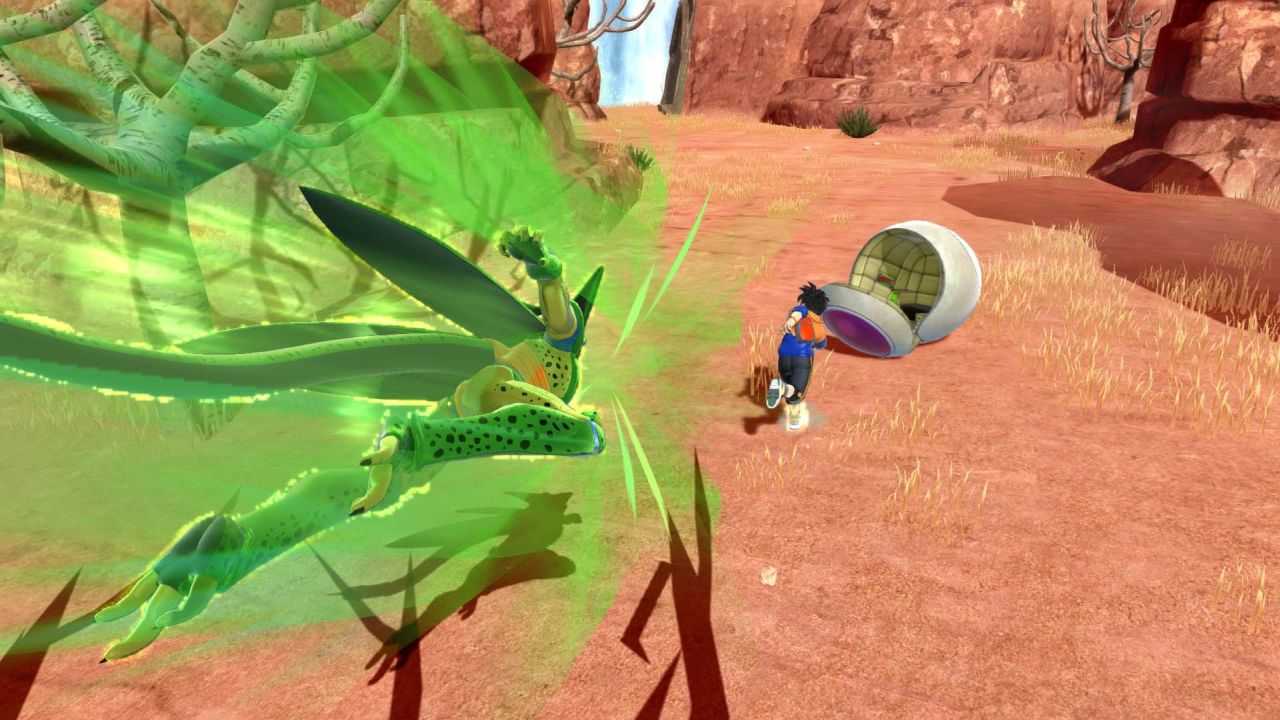 The last way to win is to kill a raider by reducing their health bar to zero, but this is by no means an easy task. Before entering a match, you can equip a Survivor with items called Transpheres, which contain a soul of a mighty fighter from the Dragon Ball franchise, that can temporarily lend their powers to a Survivor. That said, you can't summon their abilities whenever you please; you can only use the warrior's power when you've powered up their Dragon Charge level by picking up charged power boxes through containers on the map. Once the meter is complete for a Dragon Charge level, the player can transform, giving them access to that warrior's skills. During your time in this brief form, you can fly in the air and have an array of attacks within your arsenal, ranging from the iconic Kamehameha blast to using the energy wave attack Galick Gun. Sadly, the controls when using this form are dreadful. The camera angle will continuously keep moving, making it hard to fathom where you actually are, let alone whether you are in the range to land an attack successfully.

Of course, no Dragon Ball game would be complete without the iconic seven Dragon Balls, which can affect your Dragon Charge. If you open boxes or save certain AI civilians across the map, they can sometimes drop Dragon Balls, and if you collect them all, Shenron will grant a wish for you to reach the ultimate Dragon Charge form or all the remaining Survivors' levels to increase. However, if the Raider collects the Dragon Balls instead, they can wish for immortality. So even though this method is tricky to pull off, it's always worth holding onto a Dragon Ball if you come across one.

The Raider's gameplay is far more straightforward as you have one simple goal, ruthlessly go after all the Survivors until they are all neutralised. You can play as three Raiders: Frieza, Cell and Majin Buu. Although there is a slight difference between each Raider, they play reasonably similarly to one another. It's amusing to hunt down players like a sinister game of hide and seek as you inflict a mixture of melee and blast attacks onto your victims before you deliver a killing blow. All the Raiders have signature finishers reminiscent of the anime series. Frieza will blast his victims into smithereens with his finger death bast attack, Cell absorbs his prey through his syringe-like tail, and Majin Buu sinisterly turns people into candy and eats them alive.

In the beginning, you'll start at the villain's most basic form, but with the more civilians and Survivors you exterminate, you'll become stronger and can transform into more powerful forms.Over the course of the match, Raider will gain power and have more skills available. You can destroy one of five parts of the map when you level up, which will significantly increase your chances of finding your prey. Additionally, the Raider can cunningly select areas which affect power keys to help them pull off the ultimate back-to-the-future stunt and destroy all the time machines. Active and passive skills can also significantly help the Raider, like Cell's Auto-Evolve skill allows him to evolve gradually without consuming anyone, whereas Frieza's Scouter enables him to highlight nearby Survivors and civilians. It's great to play as one of the menacing villains from Dragon Ball Z, as you get reminded how callous they genuinely are. 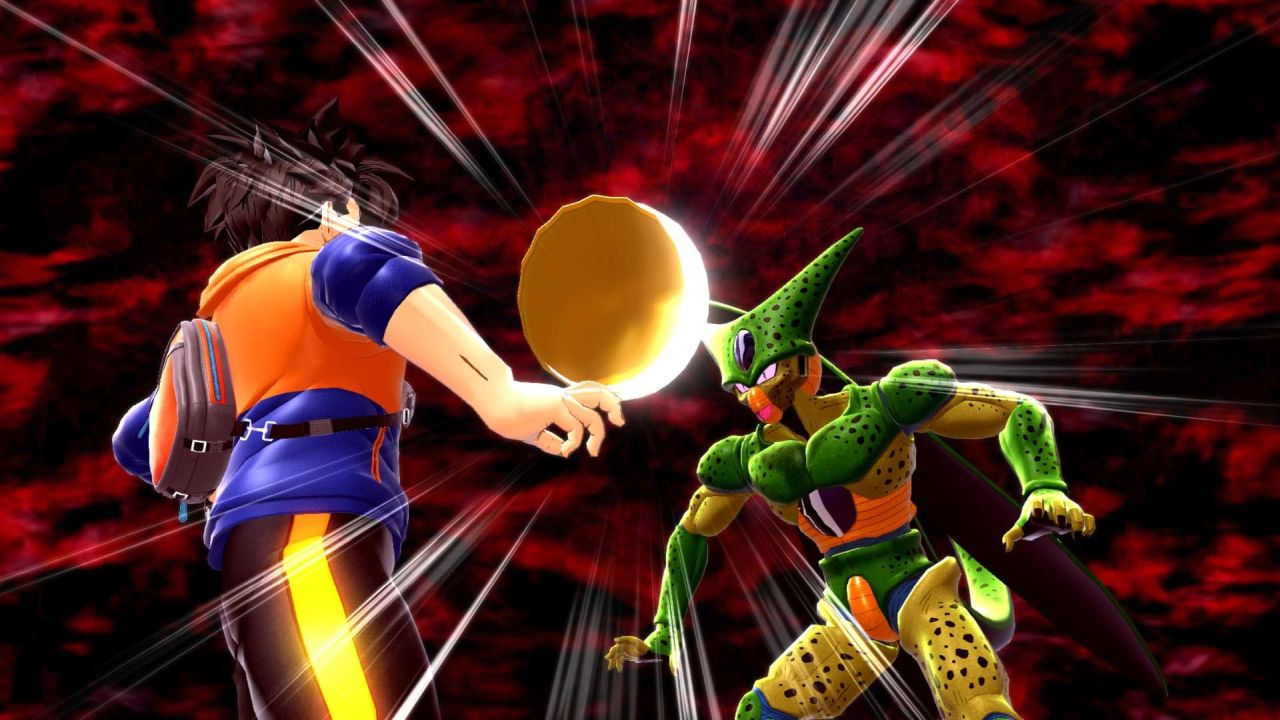 Overall, the experience is outright vanilla and will only pique the interest of advent Dragon Ball fans. The novelty will wear thin quickly as the gameplay loop will get repetitive, let alone the fact you are bound to run into technical matchmaking issues. If you're not playing with friends, the fun factor dwindles even more, as the only way to communicate with other players is by sending stickers, which can make teamwork troublesome. I don't see why anyone would opt to play this over other far superior asymmetric multiplayer games like Dead by Daylight or Friday the 13th.

Our ratings for Dragon Ball: The Breakers on PlayStation 4 out of 100 (Ratings FAQ)
Presentation
45
The level design is very mundane as you mainly travel through open terrains and miniature caves, which are not exciting. For good portions of a match, no audio soundtrack will play.
Gameplay
55
Playing as a survivor can get a bit monotonous, which is a shame as this is the role you'll assume most. However, the Raider gameplay is the real highlight, as you hunt down Survivors like a game of cat and mouse. Only has three maps available at launch.
Single Player
NR
An unhelpful prologue will attempt to show you the basics of the game.
Multiplayer
55
When playing as a Survivor, there are a lot of ways to achieve victory, but this requires a lot of teamwork. If you are playing with strangers, the only way to communicate is with stickers, so it's best to play with a group of friends.
Performance
55
Sometimes the game can freeze on the loading screen when trying to boot into a match. Game reviewed on PS5 via backwards compatability.
Overall
48
In theory, using the Dragon Ball universe as a setting for an asymmetric multiplayer game is an innovative idea, but The Breakers executes poorly on this idea, with a tedious gameplay loop and technical issues. 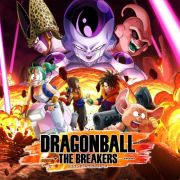