A successful improvement on a surprise hit

When it comes to unexpected partnerships, the announcement of Mario + Rabbids Kingdom Battle was up there in terms of shock. Mario and company have had their dalliances with other developers, but having them partner with Ubisoft's Rabbids seemed like an odd match. And yet, the tactical strategy title was a pleasant surprise to play, so the announcement of a sequel was not a big stretch. However, unlike the previous game, Mario + Rabbids Sparks of Hope has higher expectations to meet. 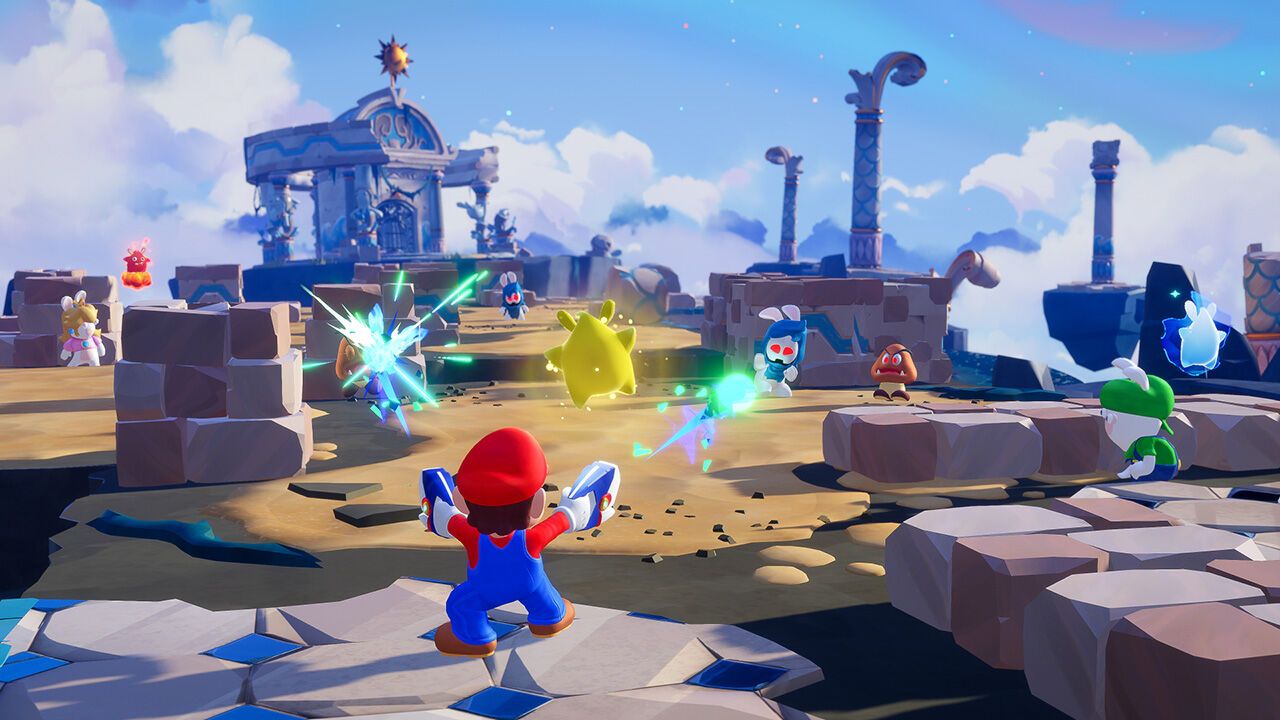 Following their invasion of the Mushroom Kingdom, the Rabbids have generally made themselves at home in their new land. Mario, Peach, and Luigi are living side-by-side with their Rabbid doppelgangers in surprising harmony. However, their peace is soon threatened with the arrival of the cosmic matter known as Darkmess. This goopy substance has a corrupting influence, and soon begins to envelope the kingdom. Eventually, the entire team is absorbed by this substance, and in order to escape back to their home world, they must defeat Cursa, the mysterious being behind the invasion.

I feel like I'm slightly in the minority when I say that I was not a fan of the story in Kingdom Battle, and that same dislike carries over to Sparks of Hope. Simply put, I really don't care for the Rabbids, and I don't find their style of humor enjoyable. The grating humor combined with new faces that fail to leave an impression makes for a bore of a story. New Rabbid Edge only gets fleshed out during the final portions of the narrative, and Cursa is a lackluster baddie. There wasn't enough personality or motivation to keep me engaged during the campaign.

Although both Kingdom Battle and Sparks of Hope borrow heavily from the excellent XCOM, there are major differences between the two. The biggest change in the sequel is the addition of Sparks. As you play through the campaign and complete missions, you'll unlock these goofy looking creatures that can be equipped onto a character. Each character can have two on their being at a time, and the Sparks come in a variety of fashions. Some of them give your attacks modifiers such as frost or electric, while others offer different abilities such as being able to pull enemies to your position. 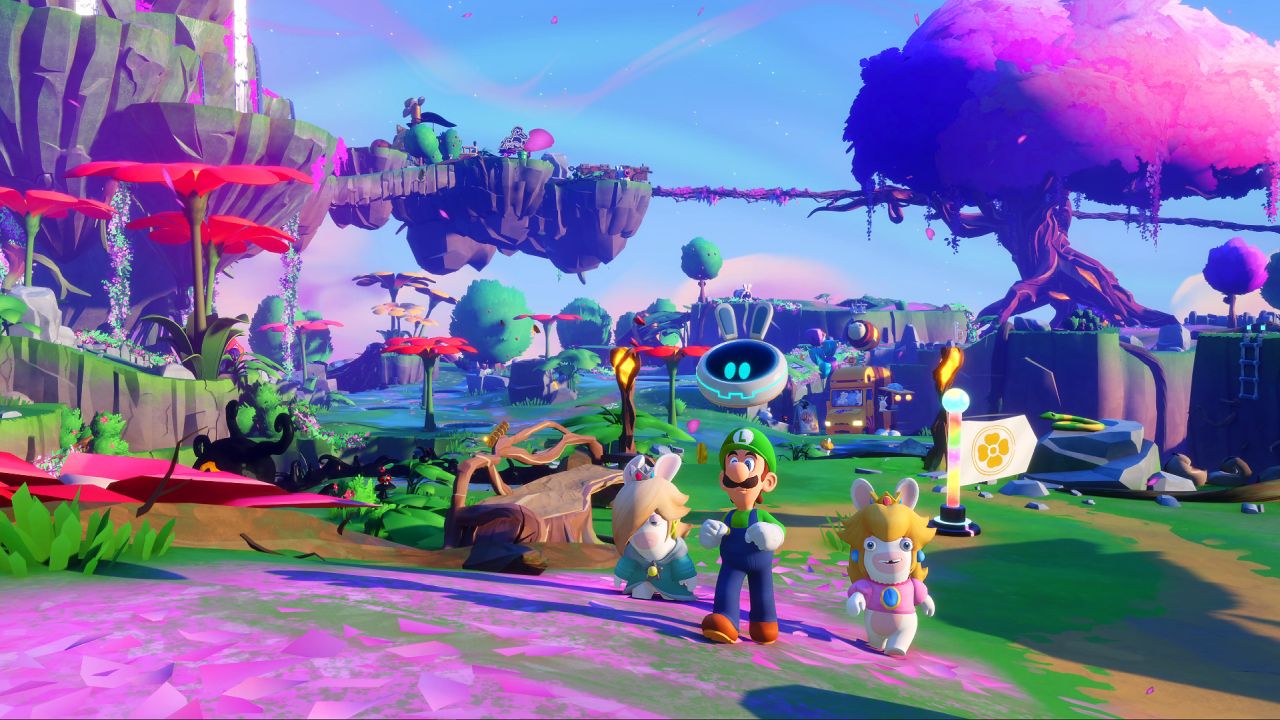 Sparks are essentially a more fleshed out revision of the Super Effects from the previous game. Not only are these specials now easier to use, but there's a much greater amount of variety to them. The last game only had a handful, and they were often hampered by having a probability meter. This go-around, once you equip the Spark you want to use, it will work no matter what. With the threat of the effect missing removed, it's now easier to plan out combo attacks between your team. Personally, I've gotten a lot of use out of launching enemies in the air with a water attack, then having them get targeted in mid-air by another member of the team. It may remove some of the harsh difficulty that was inspired by XCOM design origins, but this change ultimately makes for a much more enjoyable time.

Another noticeable change is that mobility in combat has switched from grid-based to free-moving. Each character still has a set amount of space they can cover in a single turn, but instead of shuffling around a grid, you are now free to move to any area in your given range. Movement can be extended by executing a Team Jump, or by using specific items as well. Going into the sequel, I figured this would feel more like a cosmetic change than anything else. I was surprised, though, at the ways it impacted my strategy during battle. There's a greater flexibility to map positioning, and I felt like I was able to get my team into the exact places I needed with greater ease.

Increased flexibility seemed to have been one of the core ideas that went into developing Sparks of Hope. In addition to movement and special abilities, you are also given increased control over the team you have on the battlefield. In Kingdom Battle, your team of three was always locked to include Mario and a Rabbid. However, for this adventure, you can create your ideal line-up from any of the nine playable characters. Your options include six returnees from the previous game, as well as three new squad members. The new trio is made-up of fan favorite Bowser, and new characters Rabbid Rosalina and Edge. There are plenty of ways to build your team, and it's important to figure out what line-up suits your playstyle. 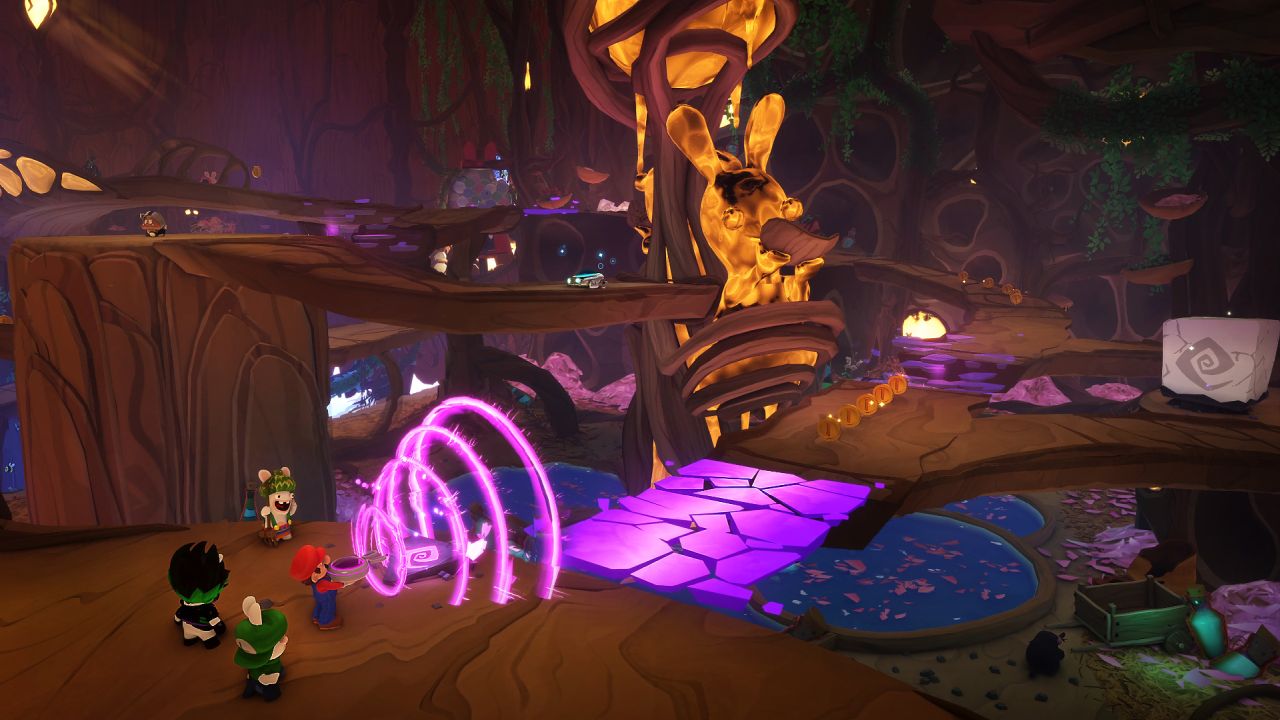 The sequel does what any good sequel should do, which is successfully build upon the framework of what worked in the prior entry. The XCOM-lite gameplay was satisfying in the first title, but the copious changes here significantly improve upon it. Outside of the handful of challenges where you're locked into using certain characters, you are given freedoms that previously weren't available to you. Being able to swap out abilities and characters upon getting a look at the combat area is crucially important. Having the option to constantly modify your line-up also helps alleviate the issue of mission parameters repeating themselves too often. The same handful of objectives tend to pop during non-major missions, so getting any semblance of variety is welcome.

When you're not waging war on the battlefield, there's a surprisingly robust amount of content to uncover. The way the story unfolds is that you are constantly flying to new planets on your quest to take down Cursa. Each of these planets has a full 3D world to explore. This is a significant deviation from the out of combat gameplay in Kingdom Battle. There are now side quests to uncover, puzzles to solve and items to collect. The difficulty level on these challenges is not high, but they are decently enjoyable to finish. Again, if nothing else, they add additional variety to the title. As good as the tactical battles are, if you were just shuffled from one to the next with no break, it would get tiresome.

The good thing about low difficulty is that the camera isn't as much of an issue as it could be. It tends to get stuck in angles where it's tough to see where you are heading. And when it does get trapped in these positions, it's easy to miss items you could be seeking out or even pathways to get to another area of the planet. Ultimately, this is by no means a game-breaking issue, but I did wish the camera could have been a tad more proficient. 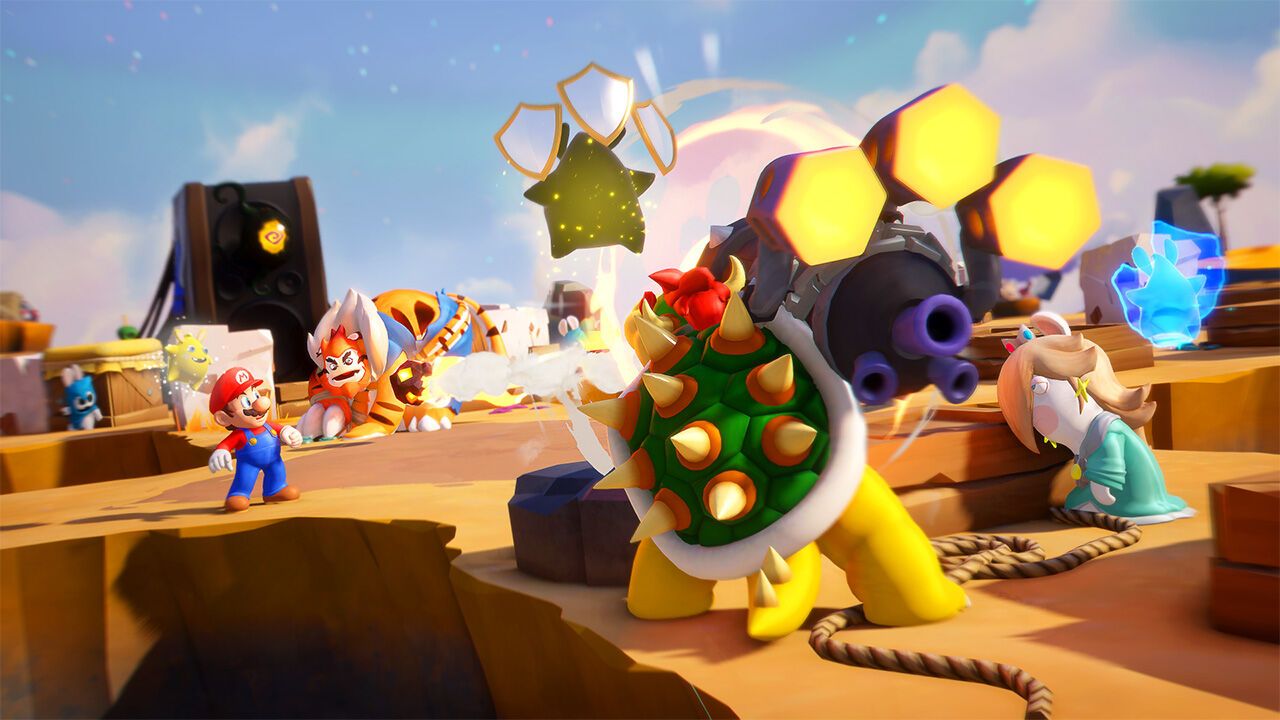 The Nintendo Switch may be seven years old at this point, but Sparks of Hope demonstrates that it's still possible to get impressive visuals out of the console. A lot of that positivity stems from the art direction, which is often bright and eye-catching. The individual planets you travel to all have their own styles, and they look great on the console's screen. The Darkmess has a gooey, extraterrestrial look that suits both the world of the series and the background of the substance. Main character models mostly look great, but you kind of know what you're in for at this point. Mario and company aren't going to look any different from their usual designs. Edge, though, may just be one of the silliest looking new characters in recent memory. They look like they stepped right out of a Hot Topic circa 2005. As a former scene kid, myself, it's hard to say if that is a good or bad thing.

Playing both docked and in handheld mode, the title runs fine for the most part. I did see some moments of lag during the more bombastic moments during a battle, but since this is a turn-based game, it doesn't really affect the gameplay. The more noticeable issue is the amount of load screens you come across. The load times themselves aren't particularly long, but the frequency in which they pop up can get annoying. If you're making multiple adjustments prior to getting into a battle, be prepared to be hit with loads every time you open a menu.

Mario + Rabbids Sparks of Hope is the blueprint for what a successful sequel should be. It expands upon the gameplay concepts of the first game in ways that are both surprising and not. Being able to craft your party how you see fit was an obvious fix, but ditching the grid movement was a bold, but ultimately, smart decision. It also builds out the non-battle portions of the game into deeper and more varied moments. It's not all perfect, as the storyline is skippable, and I still find the Rabbids more grating than not. But the gameplay is strong enough that I'm willing to put up with these issues just to get the chance to step back onto the battlefield.

Our ratings for Mario + Rabbids Sparks of Hope on Switch out of 100 (Ratings FAQ)
Presentation
78
The hardware of the Nintendo Switch shows its age, but Sparks of Hope manages to get a lot out of it. The environments look great, and the character models are familiar, but still well done.
Gameplay
85
Cumbersome camera issues rear their head during the exploration segments, but the tactical battle system remains fantastic. Smart changes such as full power over team line-up and free movement add a lot to the combat engine.
Single Player
55
Between completing battles and solving puzzles, there's a good amount of content here worth uncovering. However, the plot isn't worth paying attention to, and the Rabbids continue to grate more often than not.
Multiplayer
NR
None
Performance
73
Sparks of Hope runs fine enough whether it is docked or being played handheld. The only noticeable issues are some small bouts of lag and frequent load times.
Overall
75
Mario + Rabbids Sparks of Hope builds upon the framework established by the first title in several positive ways. The tactical combat has been given more variety, and having more things to do outside of battle was also a smart addition. Despite the annoying Rabbids and lackluster plot, it's an overall improvement and a solid sequel.

All videos for Mario + Rabbids Sparks of Hope (5)
Advertisement ▼