A vastly expanded sequel, still with plenty of rats

Developer Asobo's first outing in the Plague Tale world was a surprise hit for the studio who were previously known for their Pixar movie tie-ins, and I suspect the sequel, A Plague Tale: Requiem, will shock even more people. 2019's A Plague Tale: Innocence was unendingly heartfelt, and while it was technically impressive, its mid-tier budget was on display in several parts of the experience. A Plague Tale: Requiem has nowhere near the same problem. Requiem is a game that's bigger than its predecessor in every single way. The sequel is almost double the length, the areas are significantly larger, and this game boasts some of the most impressive visuals of the year. The transition to a more AAA experience elevates some of the series' best qualities, but its intimate narrative buckles under the weight of millions of dollars. 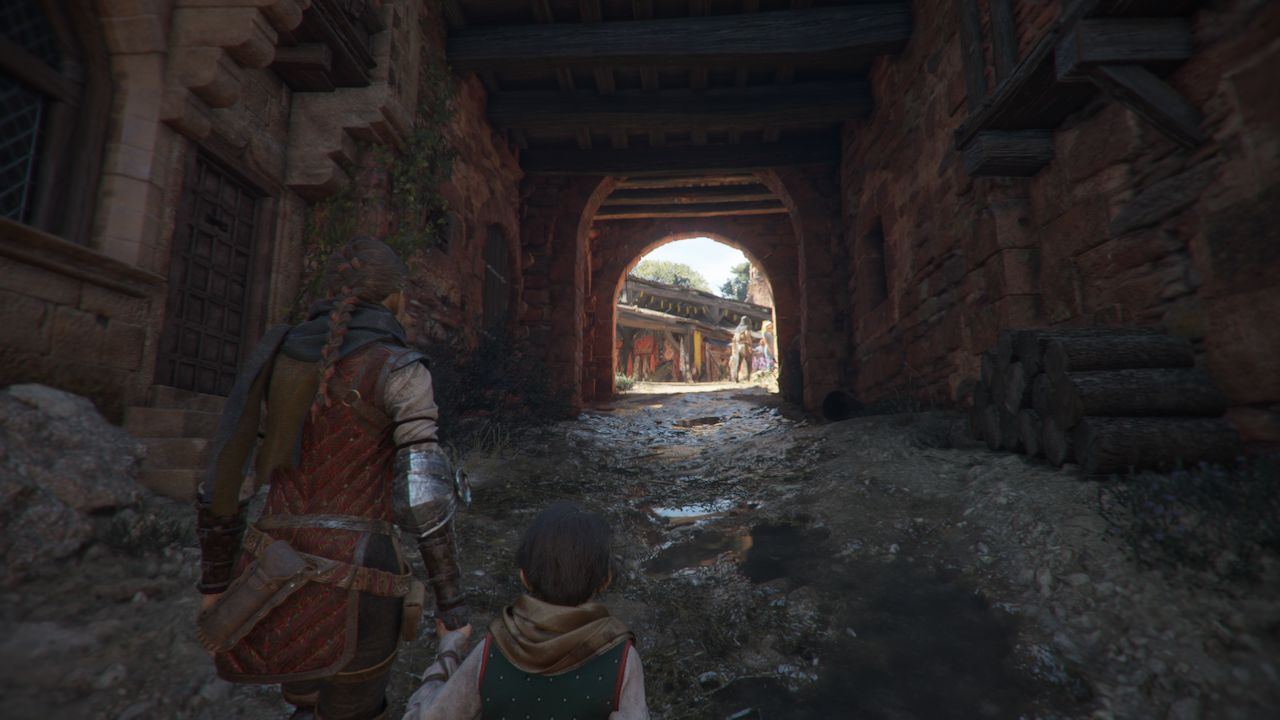 Like its predecessor, Requiem follows a sibling duo, Amicia and Hugo. Amicia, the older sister, is hard-headed, protective, and resourceful. Hugo, the younger brother, is sweet and trusting. If you were a fan of Innocence, you'd be happy to hear that all is well when they begin their adventure. The deadly rat plague has subsided for months after the first game's events, and Hugo's hereditary illness - which was linked to the rats - has all but died down. The pair are finally happy as they frolic through the woods and play games. But, of course, it wouldn't be much of a sequel if things stayed this way forever. After Hugo's sickness flares up again, so do the oceans of rats, forcing the two to travel across 14th Century France in search of a cure.

Though both games are set in France, their visual palettes have very few similarities. Innocence was washed in the greys and blacks of a country swept in sickness and disease. Yet, across ~18 hours, Requiem continually surprises with new, marvellous sights. It still carries over some of that bleakness, but it also offers up cities that are bustling with activity and flowers, sun-kissed islands where the golden shores meet the sea, and lush forests that overwhelm you with colour and life.

The art direction is beautiful, but what's more impressive is the scale of the world. As I mentioned before, Requiem is astonishing in its size. It's not an open-world game, definitely not. But there are times when you'll see a sublime mountain in the distance - its sheer size and beauty from afar would be enough of a spectacle - and over the course of a chapter, you'll journey up that same mountain. Once you're finally up close, you're treated to all of the tiny details: the creases on rock formations, the intricate patterns on ancient doors, and the vibrant colours of the foliage. Requiem is a spectacle whether you're gazing over vistas or inspecting objects in close proximity. 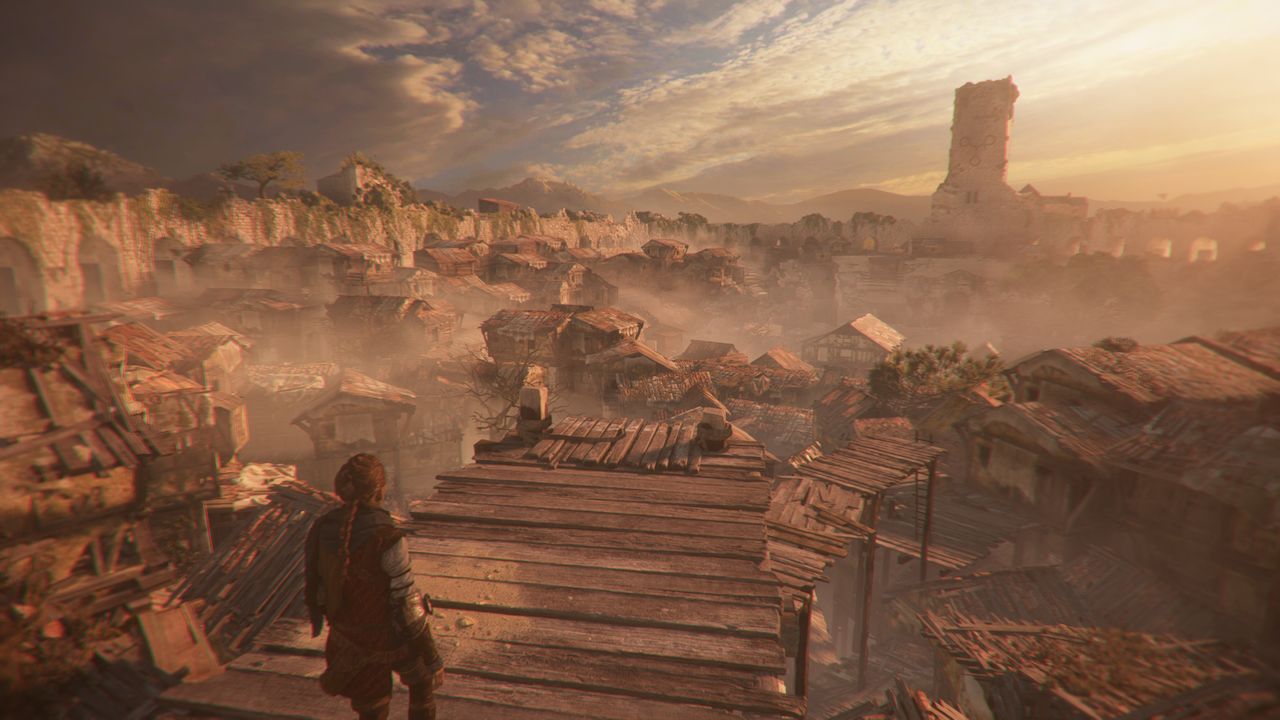 The only parts of the game that don't hold up visually are some of the character's faces. Most of the core cast looks fine, and Amicia looks fantastic. But many other characters look flat, expressionless and their lip-sync is always slightly off. It's a small gripe I had with a beautiful game that runs well, for the most part.

Requiem's larger scale has an impact on the game's core gameplay. A Plague Tale follows the same formula that most cinematic action-adventure games do. You'll be switching between exploration, puzzle-solving, stealthing, and bombastic action set-pieces at a steady rate. Just like the first game, Amicia will have a handy sling at her disposal and a handful of crafting options to deal with the pesky swarm of rats who, conveniently, hate any lights. This equipment is at the heart of everything you do in the game, from solving puzzles to avoiding rats and soldiers.

The first game felt quite rigid in its gameplay options as if there were only one or two solutions for any obstacle, which hindered how expressive you could be with the game's tools. However, Requiem's larger environments do wonders for the game's combat and stealth sections. Bigger combat arenas mean you'll be able to truly experiment with all your tools, adding lots of replayability to the experience.

You can use large bushes to sneak around enemies, hide under carriages and squeeze through gaps in walls to avoid detection. If you want to be more crafty, you can use alchemy skills to feed your enemies to the pesky rats, extinguishing handheld torches to leave them vulnerable. And finally, there's Amicia's crossbow and sling, which come in handy when you want to take a more lethal, aggressive approach. You'll pass through most encounters by mixing all three playstyles, and this cat-and-mouse dynamic is where Requiem's gameplay really sings. 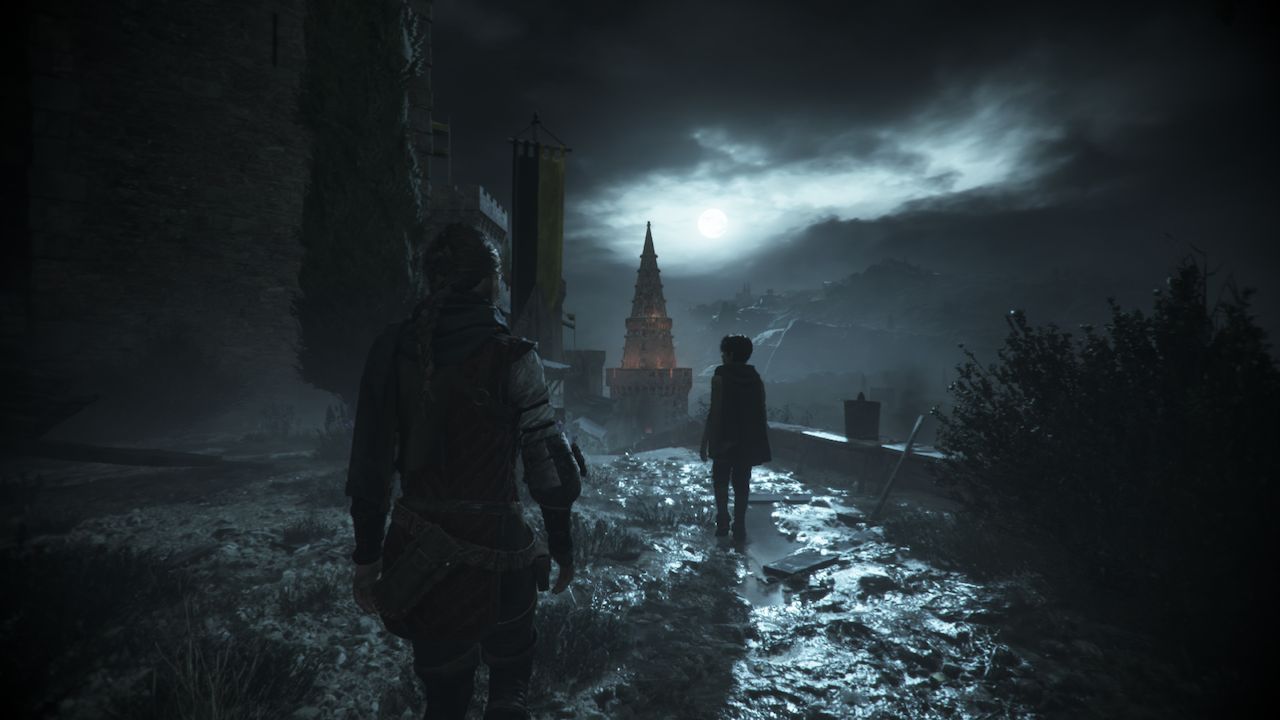 I'm more divided on the game's progression systems. Namely, upgrading your various tools with materials you've collected in the world. On the one hand, it's pretty satisfying to find a big chest of loot around a secret corner, and it gave me reasons to venture into more dangerous territories. But, like any cinematic action-adventure game, the act of focusing on loot and crafting materials is ultimately a distraction from the beautiful environments Asobo has built. Regardless, its inclusion here is much less forceful than in games like God Of War or the recently released Gotham Knights.

My only other reservations with the game are in its narrative, which is surprising since A Plague Tale: Innocence was acclaimed specifically for its heartfelt story. Innocence was a tale of two siblings going from strangers to true family, all while surviving the toughest circumstances. Requiem retreads a lot of ground. There are plot points about Hugo's responsibility in wielding his cataclysmic power and Amicia's duty in showing him the right way forward.

As a sequel, I'm not sure Requiem feels as essential, simply because we've been here before. The game asks some tough questions, which is respectable. How much is one life worth? How much can you sacrifice for those you love? But in an effort to show off a ballooning budget, Requiem begins with hundreds of people dying because of Hugo and the plague. After that, the answer is pretty obvious, and the stakes struggle to feel as dire.

My main memory of Innocence - outside of the beautiful familial relationship - was the outlandish ending that had Hugo fighting the Pope? With tornados of rats? Requiem restrains itself against any cartoony plot points, but it's instead replaced with a lot more lore, world-building, and mythical prophecies. It builds out a decent mystery. However, it's still the journey of Amicia and Hugo that shines the brightest. 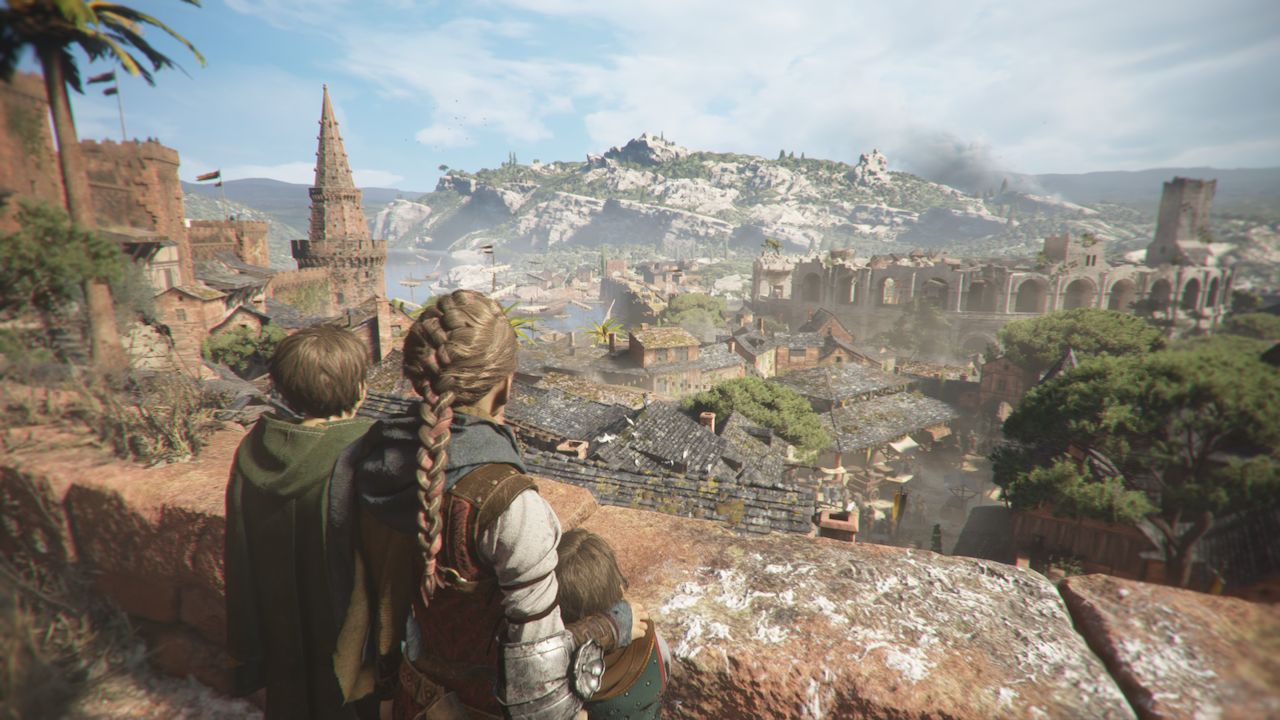 Despite a massive adventure full of toppling cities, high-seas sailing, and an eruption of pests, Requiem is at its strongest when it's scaled back. Stumbling upon a hidden swing and watching the pair play with it, finding a bird's feather to cheer Hugo up, and exploring a tropical island hand in hand - these are the moments that I couldn't get enough of. These were the moments that felt most human, that made the game feel alive.

That hand-holding gimmick probably is the heart of A Plague Tale. It recalls Ico and Brothers: A Tale Of Two Sons. Whether running through fields of flowers or hiding from danger, Hugo is always in Amicia's hand, reinforcing that unconditional love and selfless protection. It's a reminder of why family is so important. And this bond helps Requiem remain so special, despite flaws in its design and narrative.

Our ratings for A Plague Tale: Requiem on Xbox Series X out of 100 (Ratings FAQ)
Presentation
88
The variety and scale of environments here are jaw-dropping. Team Asobo graduated to the big leagues with how detailed France is here. The only gripe is with how some faces look in cutscenes.
Gameplay
82
Combat and stealth are vastly improved this time around. Though, I feel the larger explorable areas are just here to pad out the game's length.
Single Player
75
The story here is messy, including many characters, locations, twists and turns. As a result, plot points feel a bit redundant, but the core sibling relationship is still a joy to experience.
Multiplayer
NR
None
Performance
78
There are occasional stutters in more intense action scenes, but it's otherwise stable on Xbox Series X.
Overall
78
A Plague Tale: Requiem is a vastly expanded sequel, for better and for worse. Returning fans might feel that everything here is quite familiar, if only bigger and more beautiful. If the improvements to combat and the uneven story aren't enough to entice you, the relationship playing out between our two central heroes is worth another trek through rat infested France. 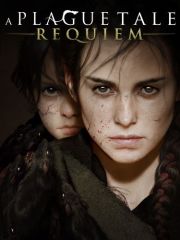 All videos for A Plague Tale: Requiem (6)
Advertisement ▼