Games like to take us to strange places. From the past to the future, we fight dinosaurs, zombies, demons, and aliens. We get to explore bizarre new worlds and alternative dimensions, as developers search for new experiences. Despite the unusual circumstances, most games find ways to explain their own world to the player. But what would happen if a strange world decided to explain nothing? You’d get Scorn, a first-person adventure that is not afraid to leave players in the dark. Scorn’s unwillingness to explain itself could have been tolerable, if it wasn’t so slow and boring. With terrible combat and dull exploration, Scorn’s strange world should be taken off the itinerary. 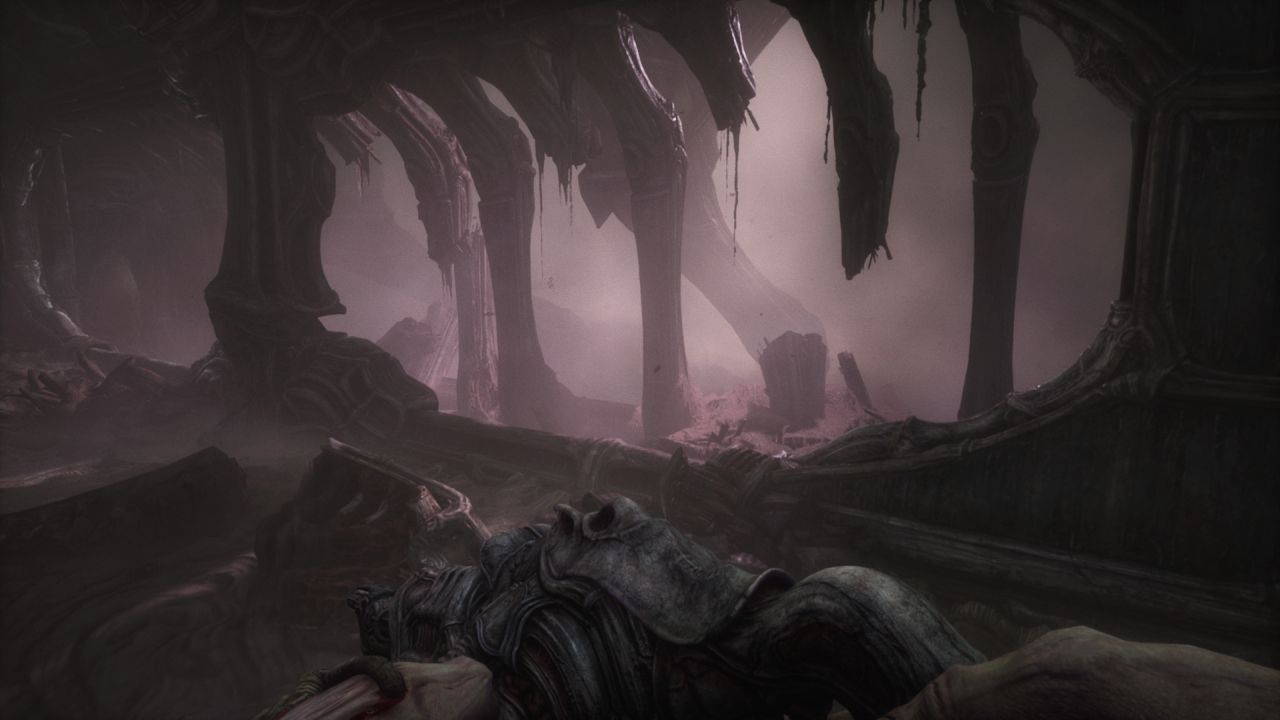 Scorn has practically no story. It throws players into a bizarre environment and expects the world to do the talking. Unfortunately nothing much translates. What we know is that you play as a humanoid character that wakes up in the bowels of an alien facility. Shortly after, you’re set upon by a twisted creature that latches onto your back and periodically attacks your stomach from behind. Your arms begin to grow roots as though some transformation is taking place. So your goal is to navigate this foreign location and, hopefully, remove this parasitic creature. Only near the end of the five-hour adventure do the game’s environments begin to tell some kind of story. By using statues and murals in the final act, there are hints at a civilization and more. But this tiny sliver of story comes far too late to have any real impact on a narrative that is always out of reach.

Despite minimal environmental storytelling, the world design appeals because it is bizarre. Influenced by the likes of H.R. Giger (Alien), the tunnels you explore are like biological passages hardened over millennia. It appears as though bone, machine, and carapace have been fused into dark walls. Ribbed floors and oddly curved hallways lead into hazy open spaces with recessed lighting. Even the corpses of other humanoids are here, telling us that this facility is now derelict. And despite this primeval mood, some new growth appears. Fleshy tubes snake through the ancient passages like intestines. Some brighter red material has latched onto the walls, spreading like weeds. Could this be related to the parasitic friend that punches your bowels whenever it likes? Possibly, yet we’re never told. But while it is all quite bizarre and gory, the world is never horrific or scary. Everything is just too weird and distant to grasp onto. It’s like falling into an abstract painting where the only thing you can do is explore. 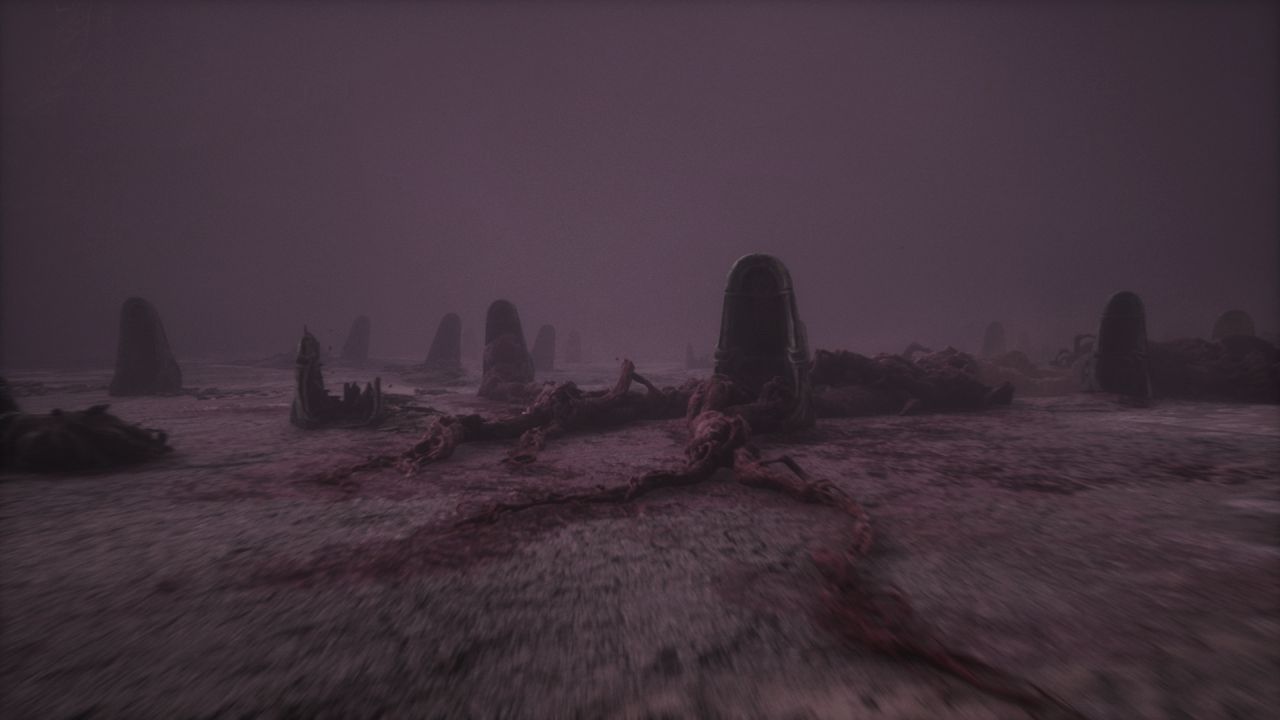 Although not a walking simulator, Scorn has a lot of monotonous walking. Down passages, through open spaces, up ramps, and across gangways, players will take a lot of steps. There are also elevators to utilize and doors to open. Many switches are strange and blend into the walls, although at least the minimal HUD highlights what is interactive. So you walk around, sticking your fingers into slimy holes, and unlock doors with a key that you occasionally upgrade. Sometimes you backtrack, although not usually huge distances. It sounds simple but the experience is dreadful. Exploration is unsatisfying. The main problem is that corridors look similar and are like mazes, so it is easy to lose bearings and quite miserable to trudge along just to throw the odd switch.

Some of the tasks are puzzles, since they require a bit of brain power. To the game’s credit, there is enough variety here in terms of the puzzle design. At first there’s a sliding puzzle where you painstakingly shuffle egg sacs using a crane. Later, you will rotate small latches so multiple lights activate at once. Most of the time you are actually just performing fairly mundane tasks, like transferring an elevator pod or refilling an organic battery with the juices of a squished baby-monster. The game never provides tips on what to do, and since there is not much puzzle consistency, progress stalls when something requires a bit of thought.

Combat does not need much thought, but it is slow and clunky. As you explore, contorted flesh beasts emerge and a basic arsenal can dispatch them. There are only four weapons and four enemy types, but the last of both only appear briefly in a boss-battle scenario. The first weapon is a close range impact hammer with unlimited ammo. It takes a while to recharge after firing just twice, so running backwards and hiding is practically required. After a kill, the hammer can get stuck inside the faceless enemies and there is a ten-second animation to withdraw it, while other hostiles wait patiently nearby. The other two main weapons are the equivalent of a pistol and a shotgun. Both have limited ammunition, short ranges, and slow reload times. To stock up on health and ammo, special wall devices need to be used and, as you might guess, these take forever to dish out supplies. 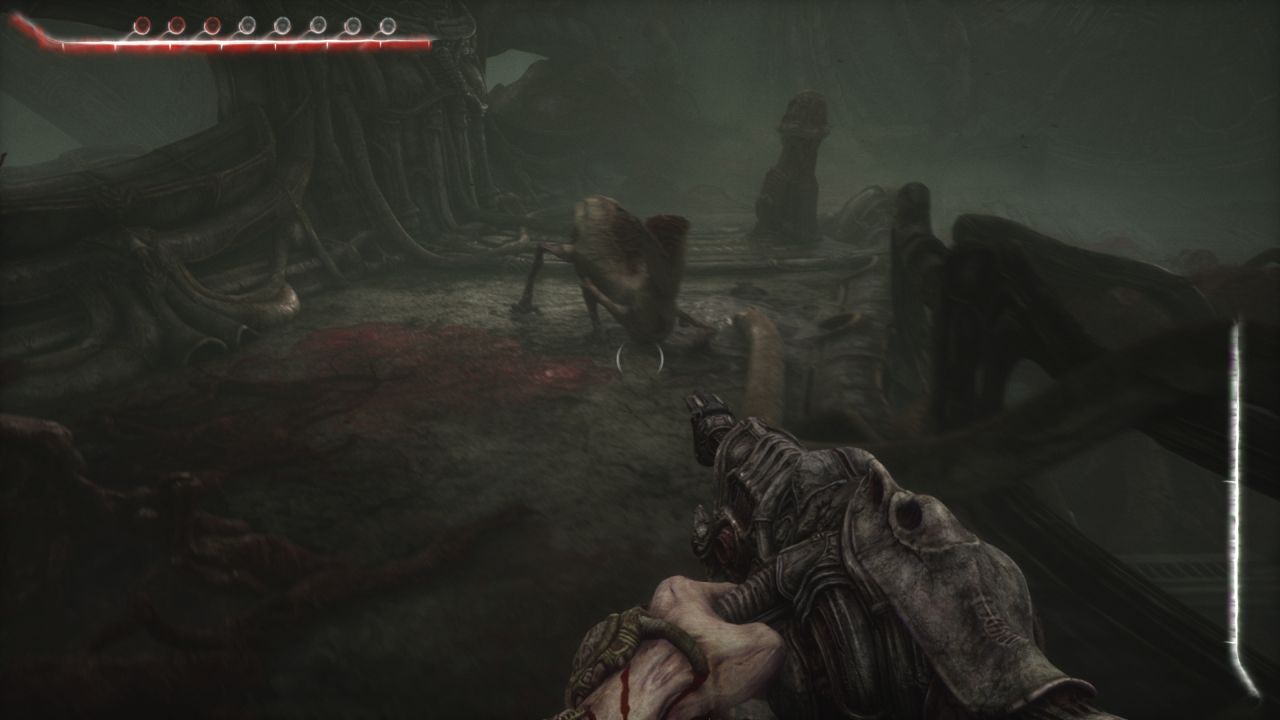 The enemy types are bland and not that smart. One crawls and vomits acid. Another flaps tiny wings and lobs toxic projectiles from further back. And the third is a bigger enemy that shoulder-charges with some power; this one takes many shots to kill, and blocks you into a corner while you struggle to reload between the falling-over animations. Strategy for combat involves using the terrible impact hammer wherever possible, to preserve ammo. Another technique is to wait it out, because some beasts will climb onto the fleshy growth and crawl away. The third method is to just run past the smaller enemies, strafing like crazy and hoping their attacks miss. This latter approach is nice and quick, but also risky because save points are rather far apart. Dying can mean replaying a decent chunk of action, and doing more shooting than the bare minimum is an unpleasant thought.

In or out of combat, Scorn’s sluggish pace is a test of patience that some might find horrifying. How much clunky first-person shooting can you endure before it becomes a nightmare? How many slow elevator trips can you retake until the next is torturous? And after how many hours will you scream at the game to just get on with it? Maybe that will happen near the end, when the game decides to slow your walking speed. Or perhaps you’ll scream at the midpoint, when your parasitic buddy decides to tear into your colon, again, while you cower on the ground in another uninterruptable, protracted first-person animation. Most actions in Scorn would have been far too long if they took half the time. It’s an experience that does not respect the players’ time, and only the most patient could finish it without getting irritated. 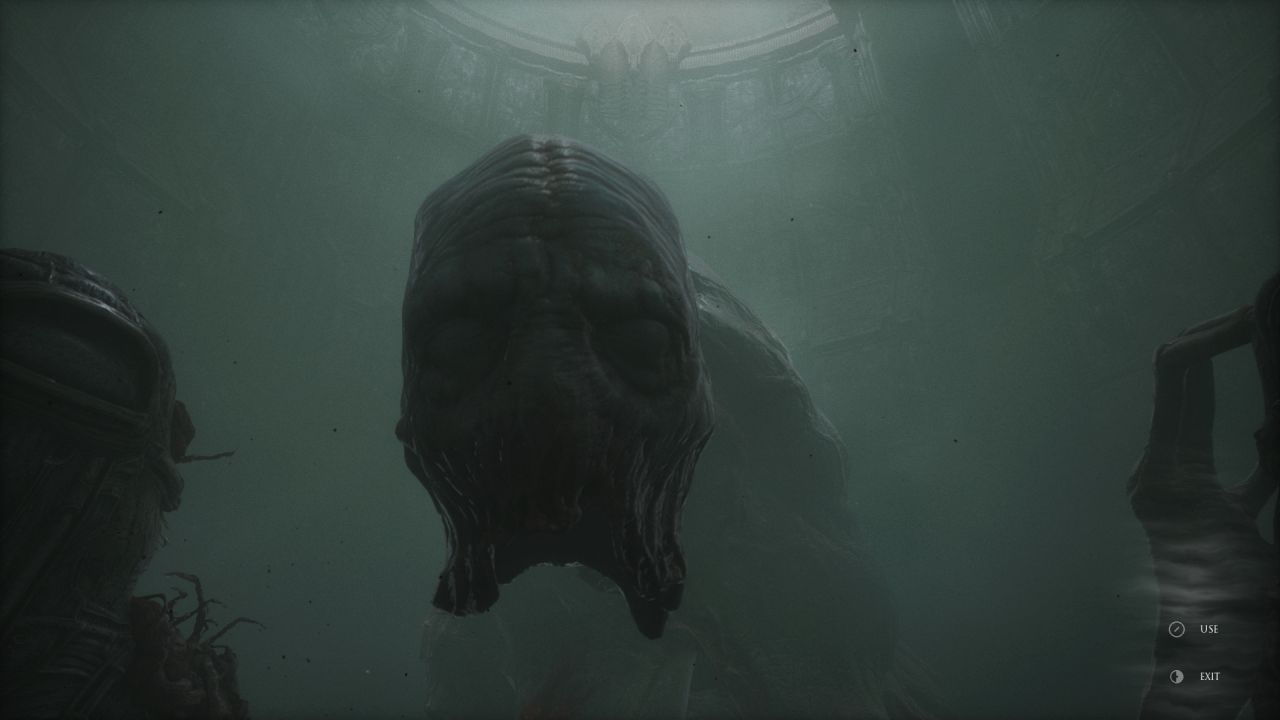 So even though Scorn’s strange alien world has an interesting style, playing it is too much of a struggle. With no direct story, the game relies on the environment to explain what is happening, and it does a poor job of that. Despite some cool biomechanical landscapes and a few puzzles, exploring is horrible because you plod down similar corridors and flick weird switches. And combat is so clunky it should have been removed entirely. Some players will be able to stomach Scorn, because of its aesthetics, but all who play it will get punched in the gut, for one reason or another.

Our ratings for Scorn on PC out of 100 (Ratings FAQ)
Presentation
75
The strange biomechanical corridors and ancient structures are a sight to behold, and the design is consistent. Unfortunately there is quite a bit of repetition so it can be bland and claustrophobic.
Gameplay
35
Exploring similar corridors and interacting with strange devices is boring enough, before taking into account the atrocious combat. At least the puzzles are varied.
Single Player
20
There is no story in the traditional sense and the world has nothing interesting to say, until near the end when it is too late to care.
Multiplayer
NR
N/A
Performance
(Show PC Specs)
CPU: AMD Ryzen 5 3600
GPU: ASUS 6700 XT DUAL OC 12GB
RAM: 16GB DDR4
OS: Windows 10 Pro 64-bit

80
Some minor stuttering when transitioning to new areas but otherwise the performance is good.
Overall
49
Despite showcasing an interesting visual design, Scorn is an agonizing trip through a bizarre alien world with clunky combat, glacial mechanics, boring exploration, and a misplaced narrative. 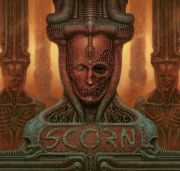 All videos for Scorn (6)
Advertisement ▼