If a zoo builds up renown for having exotic wildlife and being a good day out, hundreds, if not thousands, of people will visit it daily, from local residents to international tourists. For this reason, the zoological industry has become a lucrative business model because if you capitalise on the tourist hotspot correctly, there is handsome money to be made. Let's Build a Zoo is a quirky yet enduring management game based on building up your own zoological garden to create the most successful business possible, but in this pursuit, will you decide to make your enterprise a reputable outfit or take every shortcut possible? 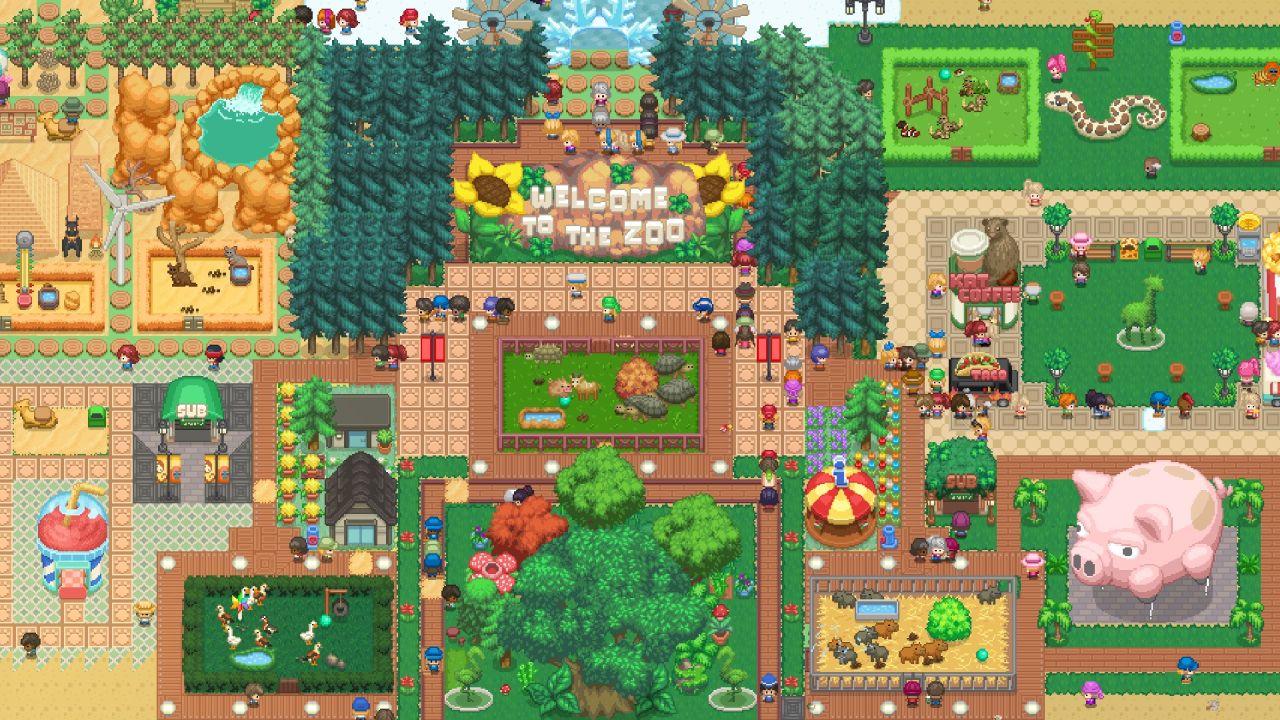 You are in charge of the business affairs and the running of a brand-new zoo which was made possible by an investment. Before opening, you'll need to make an enclosure for the animals. Another zoo then gives you two free rabbits to kickstart your zoo. Finally, after the flobby-eared critters have been delivered to the enclosure, you're ready to open to the public and make some money. Running a zoological park won't be as easy as that if you have grand dreams of making it a mass tourist spot; people aren't going to travel across the globe to visit two measly rabbits. By going on the world map, you can buy different species from animal shelters for a small price or trade animals you already have with other zoos worldwide. You can get an excellent range of animals, from elephants, monkeys, red pandas and even penguins, which look adorable in the game's splendid-looking pixel art. It's worth getting a range of varied animals for your zoo as it will boost your unique animal typing, attracting more customers. Even getting different variants of animals preexisting in your zoo will increase your reputation, so it's always a good idea to be on the lookout and visit the world map from time to time.

This is a 2D title with a top-down perspective that compliments the pixel art-style. To make enclosures, you pick the build option on the menu and select the enclosure you want to build. From here, you highlight the ground area where you want the enclosure to be located by pressing the A button and connecting these lines. To move across the zoo, you use a cursor which is controlled by the left thumbstick. Like many business management games, moving the cursor will help you navigate the surroundings and aid in placing buildings and decorations. When you slowly build and expand your zoo to a bigger size, moving the cursor across the screen will occasionally cause the game to lose framerates. Sometimes the cursor itself will disappear from the screen, meaning you can't interact with any of the facilities. Luckily, you can also access a shortcut wheel by pressing LT, where you can easily access things like buildings, employees and feeding stock. The shortcut wheel has no issues whatsoever, and you'll probably use this as your primary method of accessing particular sections, as it's much quicker than the cursor.

If you want to appease visitors, ensure your zoo is attractive; if customers feel more relaxed, they'll be more inclined to spend money. This can be achieved by placing down decorations such as trees, statues and tiki shelters, to name a few. Another way to encourage consumers to part away with their hard-earned dough is by setting out vending machines, gift shops, and food and drink stands. This can make your zoo feel more vibrant, as there are plenty of things to occupy visitors. What's more, you can alter ticket prices, as visitors will be willing to pay more if they're getting a better experience. But, of course, for everything to run like a tight ship, you'll want to hire different types of staff members, from animal keepers to feed the animals daily, janitors to keep the place spick and span, and shopkeepers to run the stores. 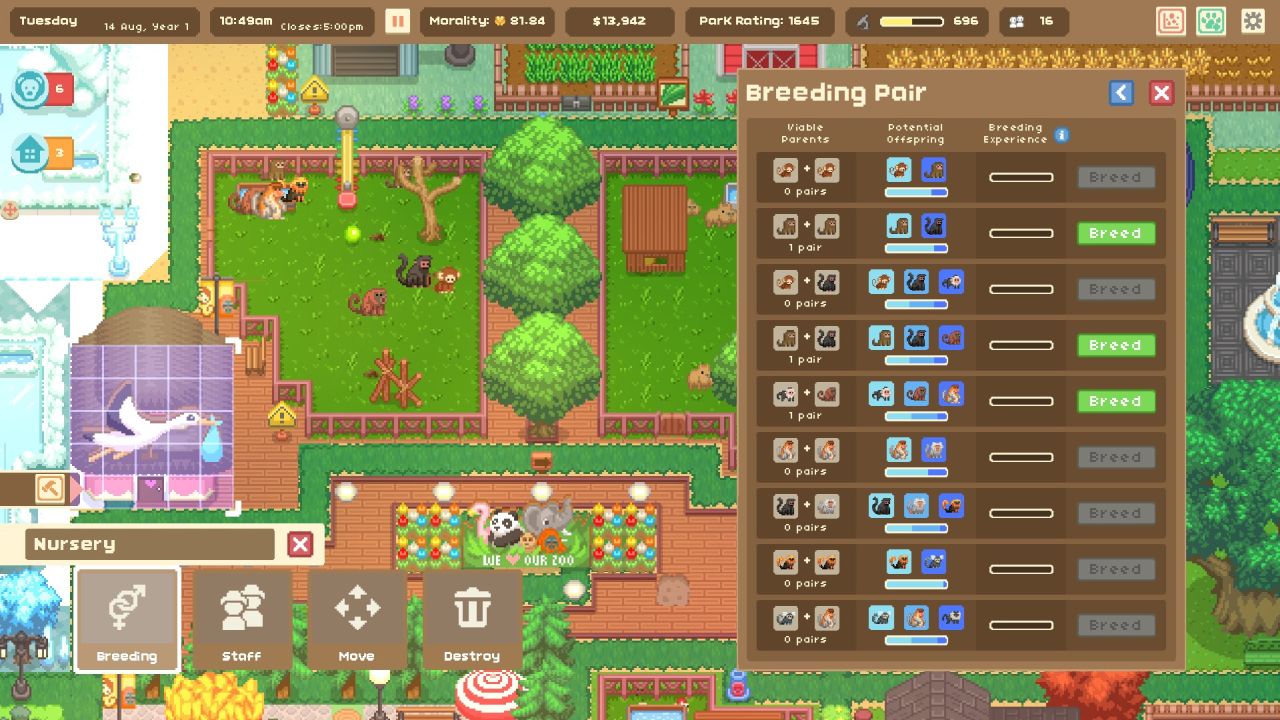 As you can tell, there is a lot to take in, and unfortunately, the tutorial is incredibly thin on information. In fact, because there were so many things I would have done differently, I started a new file from scratch after 2-3 hours of playing, as I knew I could have maximised profits much better. For example, I didn't know you could stop animals from breeding with one another in an enclosure by putting them on contraception. As the animal population was increasing as they reenacted Bloodhound Gang's most famous song, I couldn't afford to feed them all, leading to a good bunch dying. To make matters worse, to get rid of the dead animal bodies, you need an incinerator that you unlock at the research hub; that was another aspect the tutorial failed to tell me. Although the situation was morbidly hilarious, to say my first zoo was an utter mess would be an understatement.

Over time, you'll earn points that can be used at the research hub. There are many facilities to unlock, from a nursery that will help you breed certain animals to a farm where you can grow crops that you can sell later on. You can even unlock simple things like food stands, different types of enclosures and items to help improve the animal's lifestyles, like car tyres and trampolines, which the animals can use. All this, in conjunction, helps you feel connected to your zoo, as does the morality system.

Probably one of the game's defining features is the morality scale. With every choice you make, you either earn positive or negative points. For instance, if you want to keep money, you could make the living conditions for the animals uncomfortable, like forcing certain species to cohabitate or live in overcrowded enclosures, but this will give you negative points on the morality scale. Other times, you'll be presented with absurd but funny dilemmas like deciding whether or not to return a lost dog to its owner or dress it up as a lion for your zoo. 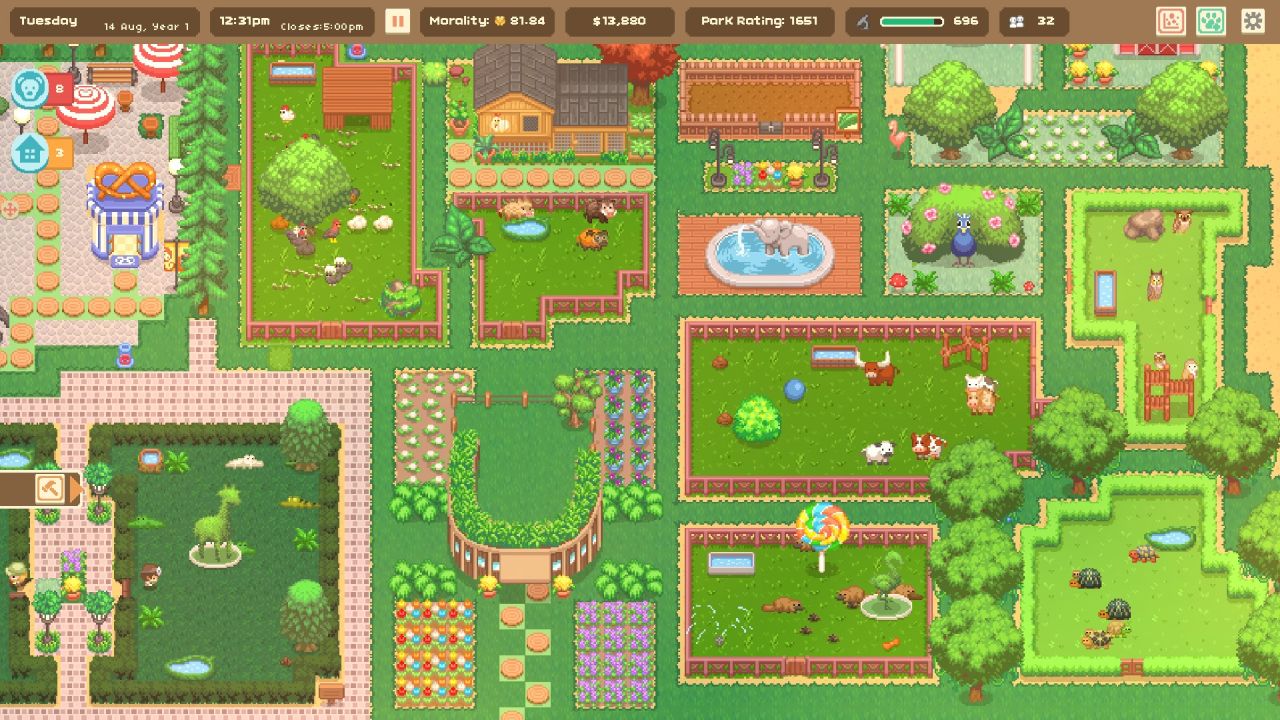 However, you then build up points from those choices, and if you reach a certain number of points, you can purchase certain facilities from the research hub. You could create a zoo that fosters ecotourism-friendly facilities with wind turbines that generate electricity, a water tower, and a recycling centre. Alternatively, you could become a shrewd and exploitative operator as you illegally steal electricity from the local government with electricity siphons, a glue factory that turns animals into products, or a furnace, so you don't have to pay out for garbage collection. Every choice you make solidifies this feeling that this zoo is your creation. Admittedly, picking the devious options is pretty humorous as it's littered with dark jokes, but it's also nice to play it from the good side, as it creates this almost cosy and charming atmosphere while playing.

You can unlock a sandbox mode if you want a more leisurely experience where you don't have to worry about grinding up research points or don't want to be bounded by the morality choices you make. To do this, you'll have to buy another zoo on the world map, which is the sandbox mode, so you will have to play the main campaign for a while to accumulate the money to buy it.

You can also DNA map the animals, allowing you to have more of a direct role in their reproduction as you genetically manipulate them. When you receive the CRISPR machine, you will be able to perform an ethically questionable practice called splicing once you have collected all the variants of an animal. The machine will let you genetically splice two different species together to create an entirely new animal. This almost Frankenstein-like process can create bizarre and monstrous outcomes, from a Capybara head on a duck's body to a chicken head on a cow's body. Even though initially this may it seems like a wacky idea, I didn't find myself caring about this aspect too much. Sure, having these hybrid animals boosts your unique animal rating, promoting more visitors, but it almost made the zoo look messy as the standard animal designs are so great. I want to run a zoo, not be the captain of the ship Prometheus with mutant-looking creatures. 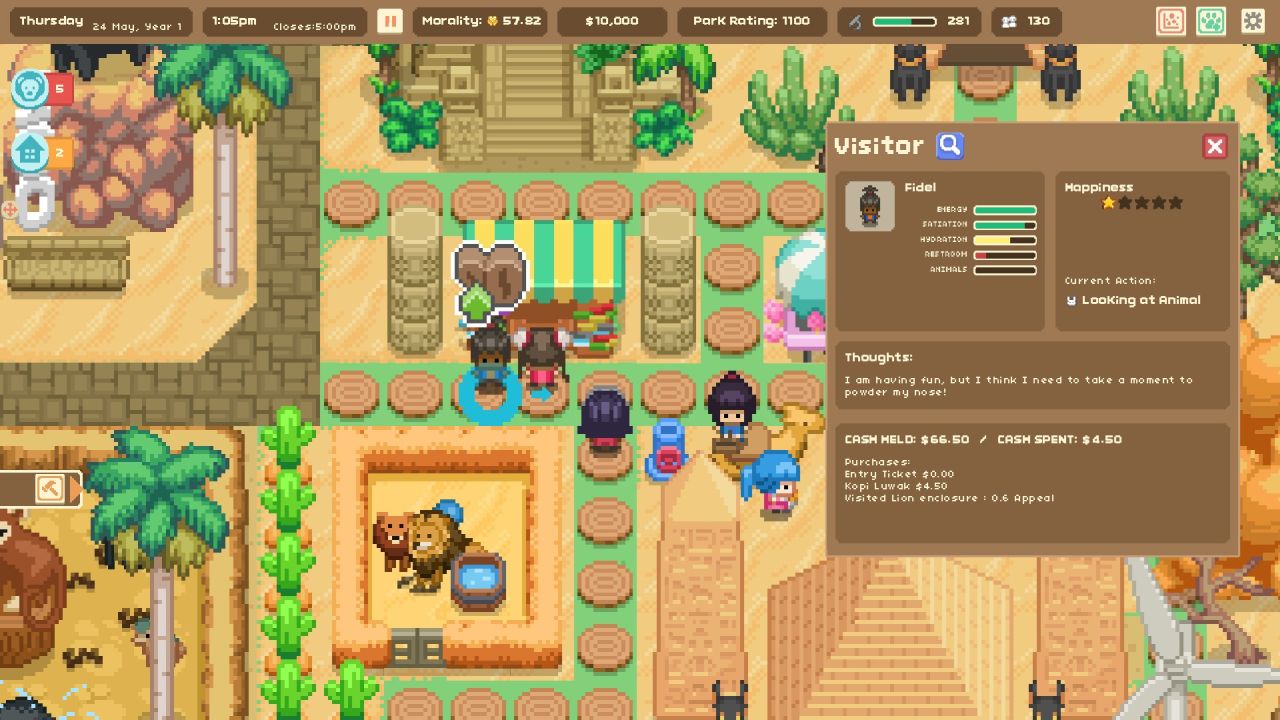 Let's Build a Zoo takes the concept of running a zoological park and turns it into a business management game filled with humour. The game is not as serious as Planet Zoo or Zoo Tycoon but embodies the more old-school spirit you would see back in the day with the Bullfrog Productions titles. There is a lot of creative freedom, from picking what animals you want in your enclosures to deciding how you will decorate your park. What also helps make the zoo feel personalised is that your choices create an entirely different atmosphere. As you build facilities, collect more animals, and hire employees to ensure the zoo runs smoothly, you'll have to keep an eye on many elements simultaneously, which can be a juggling act. This is why it's a shame the tutorial lacks info, as it's hard to pick up new information while playing. That said, if you push through and teach yourself how to play, it's incredibly addictive. Let's Build a Zoo warrants its price tag and is worth checking out if you're on the hunt for a lighthearted management game.

Our ratings for Let's Build a Zoo on Xbox One out of 100 (Ratings FAQ)
Presentation
75
The pixel art looks great and makes the animal designs look adorable. In addition, the facilities you unlock at the research hub will allow you to create a unique-looking zoo. However, the spliced animals sometimes looked a bit too wacky.
Gameplay
83
It's fun and addicting to build your zoo from scratch and create a thriving business. There are a lot of elements to consider when playing, from hiring enough staff members to building facilities to maximise profits. The moral dilemmas are reasonably funny and impact your zoo.
Single Player
60
The tutorial is barebones and should have explained more of the fundamental mechanics.
Multiplayer
NR
None
Performance
60
On occasions, moving the cursor after you've added more buildings and facilities to your zoo will cause the game to lose framerates, and the cursor itself will freeze.
Overall
73
Let's Build a Zoo is an enjoyable management game that allows you to create and construct your own zoological park. The moral dilemmas you are often presented with are absurd and humorous, as you choose to either be a steady-eddy business hustler with an ecological mindset or be a sinister and exploitative tycoon. 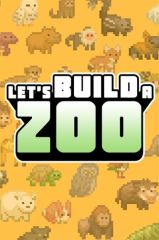