Between a rock and a yard place

Survival games are great at bringing players back down to earth. They throw you into a hostile world and ask you to scrounge for resources, craft tools, and do anything to stay alive. As you fend for yourself and explore, new challenges regularly appear to make you feel small again. Grounded is a survival adventure game from Obsidian that makes you feel small in more ways than one. You play as a teen that has been shrunken down to the size of an ant and thrust into a perilous backyard with deadly spiders, skittering ants, and swooping mosquitoes. It is an experience that sucks you into a brilliant miniature world, and despite some progression issues, Grounded is a grand survival adventure that provides excellent value. 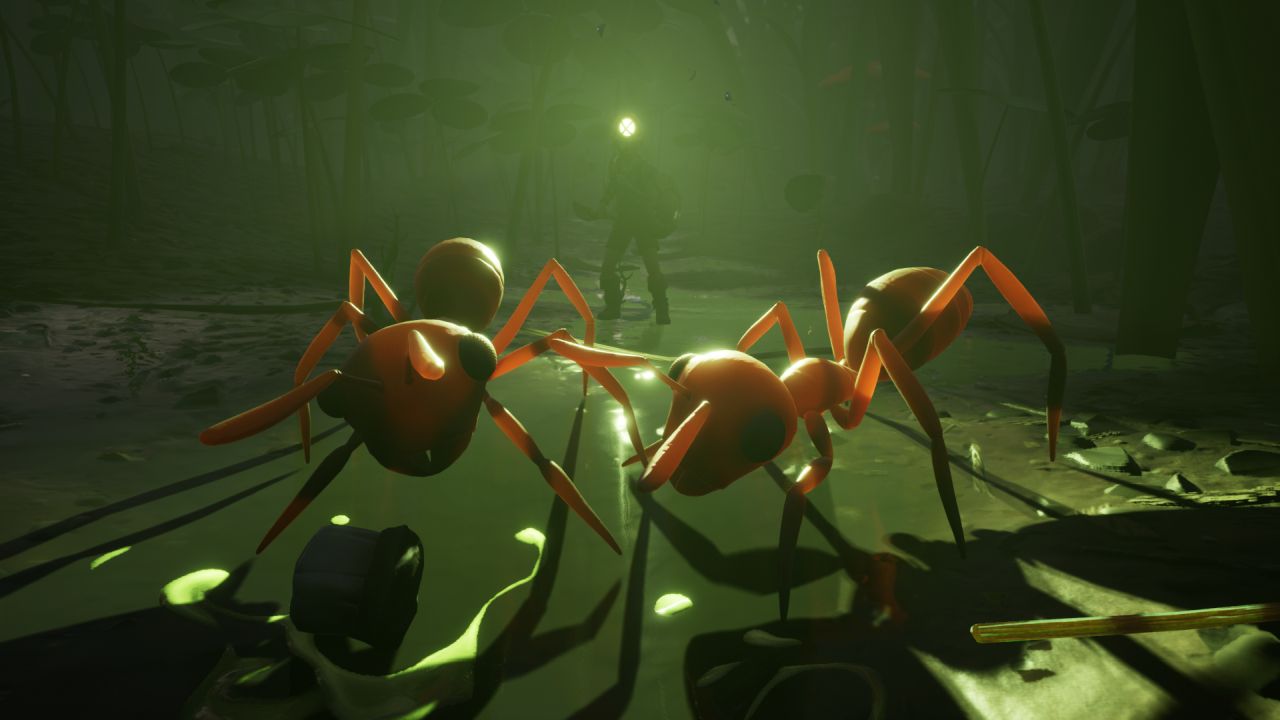 As a tiny teen, your goal in the story mode is to return to normal size. Near where you begin is a broken device that looks like it will do just that. Some information is needed to fix it. Scattered around the backyard are traces of scientific equipment left by another tiny human. A scientist named Wendell created field sites and laboratory bases. Some of these labs are now in partial ruin, decimated by things entomologists get excited about. You can listen to Wendell’s humorous tapes as he dealt with ant incursions and sticky webs. He was also the one who created ‘raw science’ globules, which can be collected to unlock new things and improve survivability. Wendell is missing, but his silly and forgetful burger-flipping robot assistant wants to help. This crazed robot needs a bunch of superchips from inside the remote labs. Once found, you’ll have most of the pieces to get big and go home, but first you must safely navigate the hostile tiny world.

From the ground perspective, exploring the backyard is a great experience full of wonder and danger. Blades of grass are like trees, discarded toys become giant landmarks, soda cans expel precious water, and ant nests are dark caverns that hold valuable resources. The world looks awesome, but it’s also dangerous. Orb weavers guard fence lines, and a tiny teen traipsing around is a tasty treat. At night the wolf spiders roam, stirring up the grass from the distance like a creepy bulldozer. Some areas have environmental hazards, like toxic gas or sand that burns. So careful navigation is required, and some routes are safer than others. Fortunately the map is useful, and you can leave trail markers as waypoints. The game lets the player discover the world, sometimes to its detriment; players must prod the backyard with deadly consequences. After death, you can respawn and go after your dropped gear, or just reload a previous save. Whatever way you decide to retry, slowly gaining mastery over the backyard is satisfying.

Wendell’s special laboratories are spread across the backyard, but they each have their own quirks. Some take a while to find amidst hedges or ponds, and others cannot be accessed until certain equipment is crafted. A few are home to tough boss fights that might require a change in tactics or better preparation. This lab setup works a bit like Subnautica’s underwater bases when it comes to story but it takes longer to evolve. There are only a handful of labs to enter, and when the story seems nearing a conclusion, it sets you off on a wild goose chase for unfamiliar resources in the upper yard. The main quest line needed some compressing because, while each lab is fun to explore, the narrative is spread thin over around 40-60 hours it takes to complete. 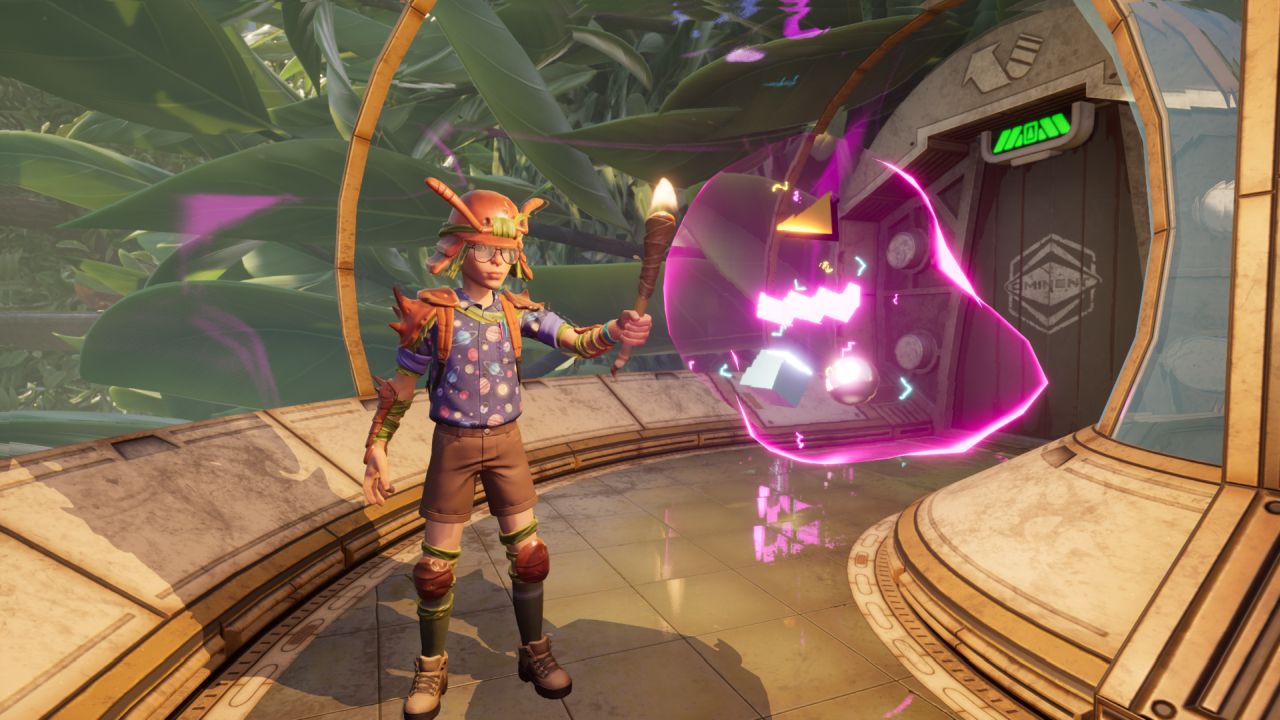 Aside from staying alive with water and food, progression is about finding materials and crafting tools. Natural resources, like plant fiber or sap, can be analyzed at field sites to unlock recipes. Many recipes make tools that allow for more gathering, like a hammer to break open rocks or an axe to cut down weeds. Then there are the countless materials associated with the creepy crawlies, like spider fangs, mite fuzz, or stinkbug glands. These might unlock weapons, armor, or health buffs, most of which have multiple tiers. Resources can build permanent structures too. Make a fire pit to cook meat from grubs. Build storage chests to hold spare resources. Or just fabricate a workbench to create weapons and armor for when a termite needs squishing. There is a continual way to improve survivability, and therefore progression is gratifying.

Progression is slow, though. Many precious resources must be collected from tough insects, but to kill them you might need high-tier weapons, and to craft a good weapon you need materials from the tough insects. So it’s a chicken and egg situation, or rather, spider and egg sac. While you might occasionally stumble upon dead bug carcasses, there is also luck involved in what the loot contains; rare components don’t always drop. Killing an armored ladybird once might not be enough, if it does not relinquish the head parts that you need. Some insects are hard to find too, and one de-spawned just before it died. Add the long travel times and quick deaths (on normal difficulty), and it can take time to get what you need. So with bad luck, high requirements, and a resource loop, getting better is like chasing your own tail, while spiders chase your backside.

Combat is simple but effective. There are one-handed and two-handed weapons, with different attack speeds and damage types. Blocking can reduce damage and better armor delays death. There is even a bow for ranged attacks, with several arrow types. All can be upgraded and repaired with materials. Getting up close and swinging works okay against little things like ants. Direct confrontation is not advised against the larger foes in the early stages as they kill in a few hits. The most reliable method of killing strong ground targets is to stand somewhere they cannot reach, like on a rock or leaf, and rain down arrows until they die. This seemed like cheating because it exploited the bug’s limited navigation abilities. But the game encourages this behavior, because the upper yard has uneven terrain and layered foliage to climb on. Insect path-finding is not great anyway. They get stuck frequently and their attacks go through obstructions in the environment, so maybe it balances out in the end. 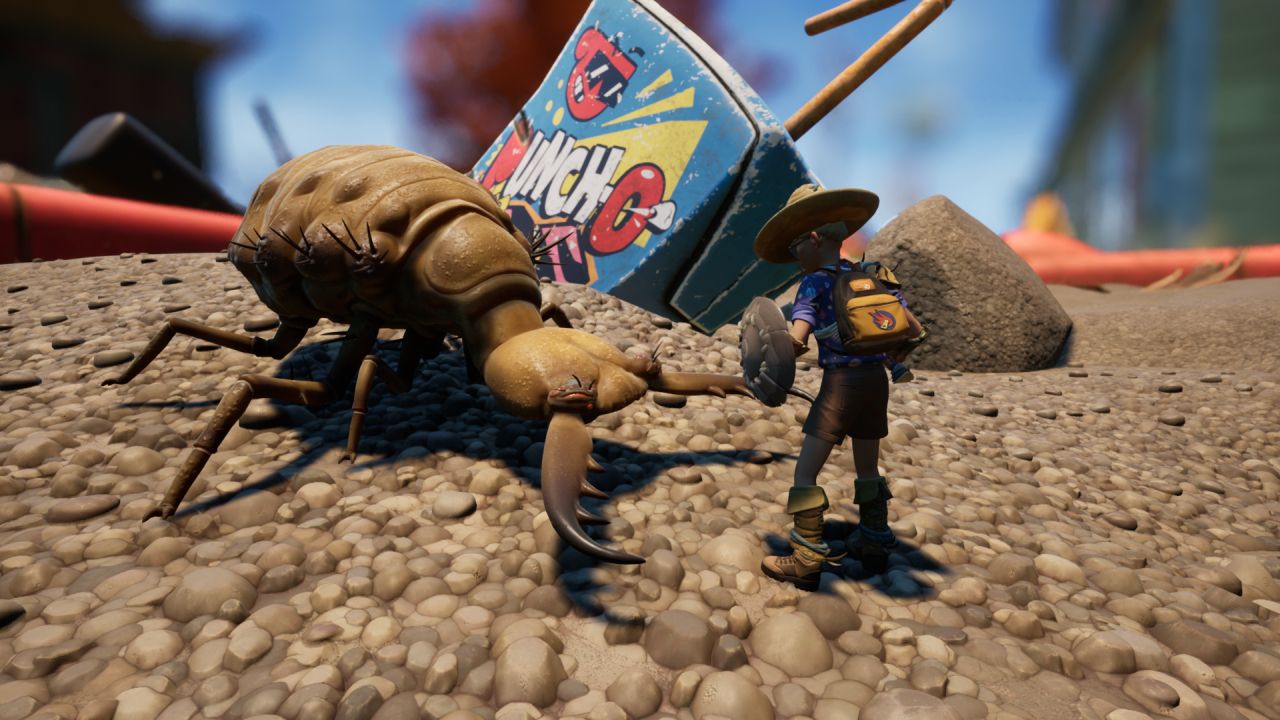 If combat antics get you down, turn your attention to base building. Making bases is easy and fun, and the creative mode removes threats and resources so players can build to their heart’s content. In the story mode, you start by chopping down grass to build foundations, walls, floors, stairs, doors etc. It’s a breeze to snap things together and copy existing pieces. Bases can be lit up with sap torches and decorated with stuffed insects that you killed. The most annoying part is that you have to carry the grass planks over the shoulder, rather than in your inventory. And this is limited, even with gear that boosts capacity, so the best approach is to store the grass on pallets that can be moved. Thankfully, high-tier base parts (like mushroom walls) are stored in the inventory. There’s one more caveat: although crafting weapons/tools consumes resources from inside nearby chests, creating structures does not, so the individual parts must be transferred to your person, which is busywork. More base parts, such as curved walls, unlock slowly over the course of the game, so there is a good reason to keep expanding and creating satellite bases.

Base building does have a few practical uses outside of merely destroying lots of grass. You can make walkways above for clean navigation and easy killing. Zip-lines can be placed for rapid traversal, and this helps in the latter parts of the main quest line. Structures are also good at protecting equipment. Very rarely, hostile insects (like ants) will seek revenge and assault your base. Leaving equipment out in the open will cost resources if they’re destroyed. Any storage chest that gets smashed open causes a headache as you relocate dozens of items from off the ground. So you want to put vital things behind some protection and building vertical is one way to do that. Better defensive structures can be made too, like pebble turrets that are effective against any wolf spider that occasionally ventures too close.

You can play Grounded with up to three others, although the multiplayer is friends only. Players can share their world, so designated companions can jump in at any time and continue where they left off, but this means no backup saves. Each world is self-contained, so there is no way to transfer equipment or materials. And even though resources are shared, many hands make light work. Building is a lot quicker with several players ferrying grass planks. Combat in groups has advantages; when four attack the same spider, two can chop at the abdomen, one can shoot arrows into the thorax, and another (me) can die to its fangs. If you do die, players have thirty seconds to revive you until you respawn. Online works fine most of the time, but it did have sync issues. Some were visual only, like incorrect player animations or bugged structures. On the practical side, Zip-lines sometimes didn’t work and it was possible to fall through constructed base parts. Picking up resources occasionally took seconds and items vanished from the inventory after death. Nevertheless, multiplayer is a fun way to spend the wee hours in a wee world. 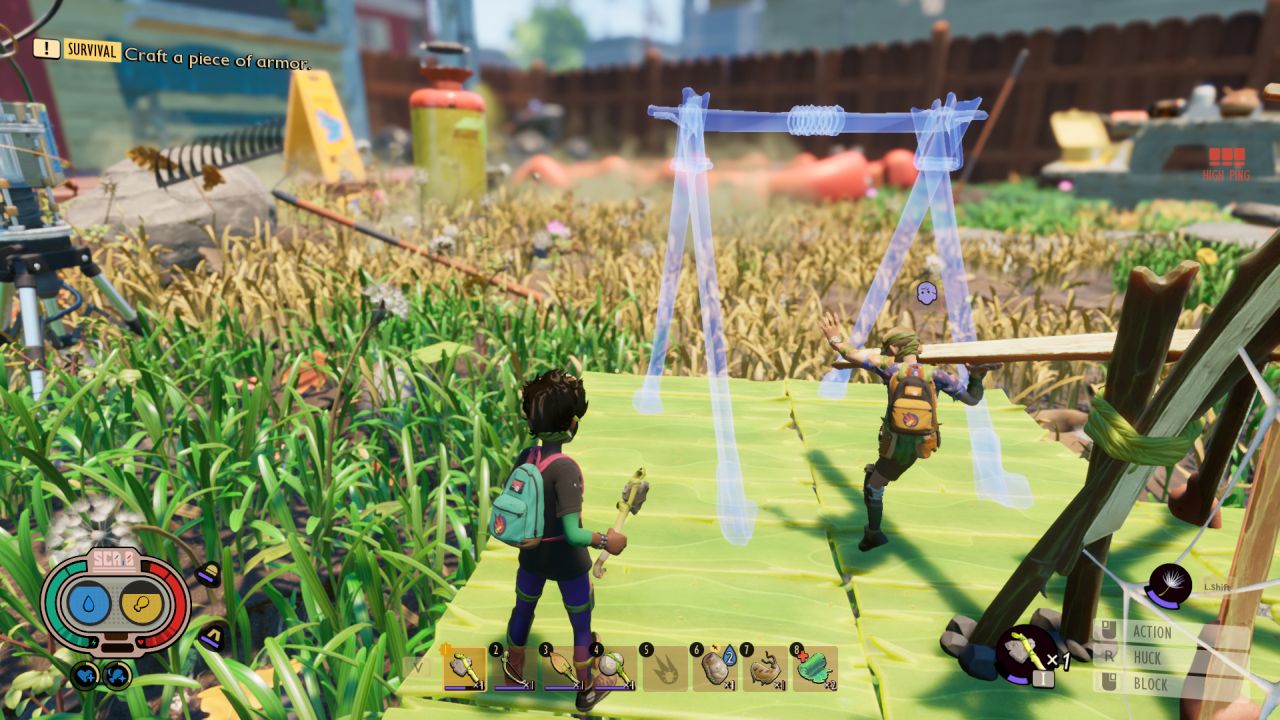 Grounded has a lot of great qualities for a survival game, even if the main quest line is a long slog when playing alone. The exploration and atmosphere of the large backyard is awesome, and framing the story around accessing miniature scientific labs works well. Combat can be tough on normal but players can exploit insects by standing on rocks and firing arrows with reckless abandon. Progression is steady and rewarding, although crafting decent gear takes a while due to scant resources and limited opportunities. There is definitely good value here, as players can busy themselves exploring a backyard full of danger or making their own bases from felled foliage. And with some friends it all becomes quicker and easier. So the next time somebody tells you to go touch grass, play Grounded.

Our ratings for Grounded on PC out of 100 (Ratings FAQ)
Presentation
80
The miniature backyard world looks amazing and has a great atmosphere thanks to all the dangerous critters and large household objects. The tilt-shift blur effect works quite good too.
Gameplay
80
It’s fun to explore the world, hunt for resources, kill creatures, and build bases. Combat is rudimentary and the insects’ navigation limitations can be exploited.
Single Player
70
Shaping the adventure around exploring hidden laboratories works. But the main quest is stretched out because the world is big and stages are gated behind high-tier weapons that must be crafted using resources that take a while to find, let alone acquire.
Multiplayer
70
Playing together results in efficient combat and quicker building. There are sync issues and each online world is self-contained.
Performance
(Show PC Specs)
CPU: AMD Ryzen 5 3600
GPU: ASUS 6700 XT DUAL OC 12GB
RAM: 16GB DDR4
OS: Windows 10 Pro 64-bit

75
Runs well with no load screens. Insects get stuck and they occasionally despawn during fights.
Overall
80
The tiny backyard world in Grounded is a joy to explore, full of danger and wonder. It offers great value, despite a slow progression system and a drawn-out main quest line. 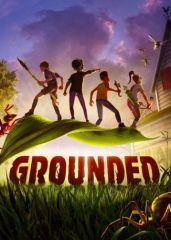 All videos for Grounded (3)
Advertisement ▼