What was once is old is new again. Gaming has a habit of going through cycles; developers make games based on what they played when they were kids, and on it goes. Ron Gilbert, on the other hand, has decided to make one based on the game he made over 30 years ago. Return to Monkey Island is a new point-and-click adventure set in the Monkey Island series that began in 1990. It has some modern trimmings, including simplified interaction and a different art style. It is also full to the brim with references of the previous games, which might go in one ear and out the other if you have not played them, or just don’t remember. Return to Monkey Island is a good 2D adventure with adequate puzzles, but it also falls a bit short in terms of humor, art, and structure. 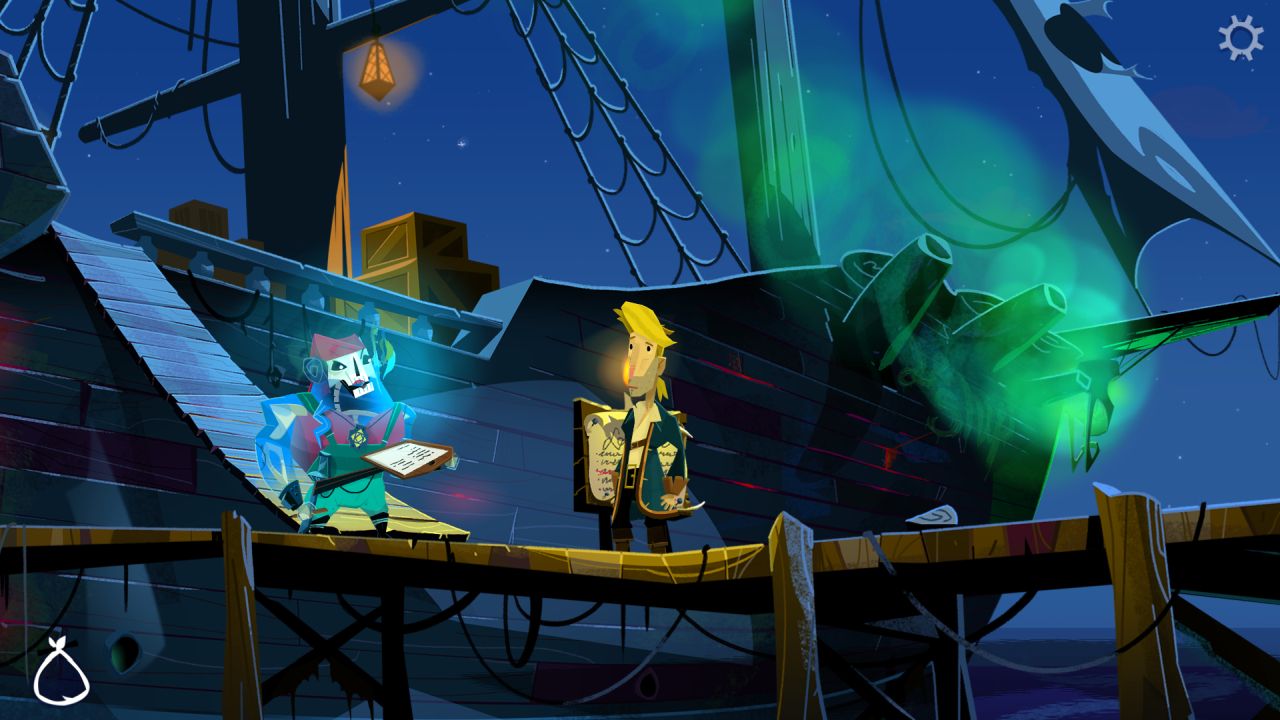 Like in the original, players reprise their role as Guybrush Threepwood, a mighty pirate adventurer. This time he is looking for the secret of Monkey Island. It just so happens that his arch nemesis, Captain LeChuck, is also trying to find it. Because Threepwood does not have a seaworthy vessel, he sees an opportunity to disguise himself as one of LeChuck’s crew and hitch a ride to the titular isle. The only problem is that LeChuck’s lackeys are zombie ghost pirates, so a disguise might take some voodoo magic. Oh, and he needs to craft a mop to clean the deck for his new job as swabbie. All of these initial steps, and more, are found on Melee Island, the first port of call for this returning tale of piracy.

The story begins strongly as Threepwood navigates his old stomping grounds and sees familiar faces. Getting aboard LeChuck’s ship is satisfying with gradual steps that ease players into the world and its fun puzzles. But the latter half travels rougher waters. Here Threepwood sails erratically between islands, and the experience is unfocused with many interruptive cutscenes. The ending is also abrupt and somewhat unsatisfying, although it fits the narrative. Most of the story is light and jovial, with nice tropical tunes and characters reappearing conveniently. It tries to make jokes often, but not all land and generally it is just mildly amusing. The funniest moments can even be missed, like when spending too much time on the ocean floor. Despite good voice work, the dialogue is a little verbose, but can be skipped if you’re a fast reader. There are also an inordinate number of references to the previous games, and at times it is weighed down by nostalgia. But, for many, this journey will be like visiting an old friend.

A friend that looks different—the art style has changed drastically for this new voyage. Most of the same colors are here, but characters look like paper cutouts, reminiscent of Double Fine’s Broken Age. Threepwood differs quite a bit from his original self, and looks rather unpleasant when the game zooms in. The world, too, is heavily stylized, with abnormal proportions and swooping curves or strange angles. Sometimes the art emphasizes parts of the world that are not important and other times it just looks weird. The new art style is an acquired taste that is not always easy to swallow. 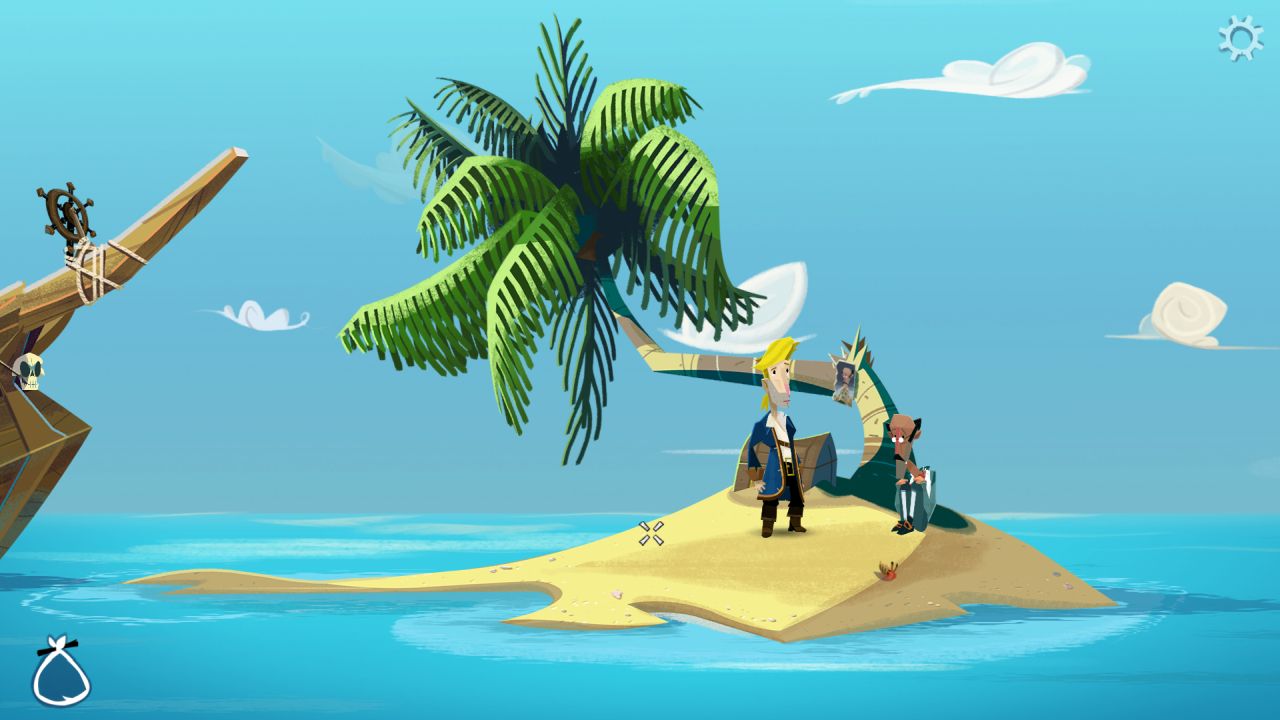 Puzzles have also changed since the original, due to the way you interact. No more of that Push/Pull/Open/Close malarkey. Left click inspects objects and right click will pick them up. There’s an inventory, too, and all you need to do is grab items from Threepwood’s bag and place them in the world for things to happen. Thankfully the interactive spots can be highlighted with a button, which is handy given how the art style is not great at indicating importance. It is all quite simple and works well due to most things doing what’s expected. Challenge comes because many found objects are not required, and the same goes for the interactive points; trying to drop every item into every place is not efficient. So while it plays a bit different to the original, most solutions are logical and overall the puzzles are good.

Two minor issues with the puzzles are their linearity and stilted pacing. When aboard LeChuck’s ship with his zombie pirate crew, you must help them with a specific task to win their vote. But instead of doing a bunch of unlinked puzzles, they feed into each other. One character needs a form, to give food to another, so that other character will relinquish a book, and so on. The inability to drift off course, and tackle a completely unrelated challenge, makes progression rigid. Linearity reduces in the second half, as Threepwood sails between locations freely. But the islands are empty and there’s a lot of travelling back and forth, so the benefit of splitting puzzles up is wasted and pacing suffers.

The adventure has two difficulty options: casual and hard. On casual, the game is easy and most puzzles only require a few steps. Hard adds extra layers and includes new areas/challenges that don’t exist on casual; sometimes these new parts can be obtuse but it generally makes sense. Difficulty cannot be changed mid-game, which is understandable but a shame, as the puzzles are too easy on casual in the latter chapters. Hard is probably the best choice, since both difficulty modes have a great hint book system to guide players. The game’s total length varies depending on difficulty, and whether you skip dialogue, but expect 6-12 hours of monkeying around. 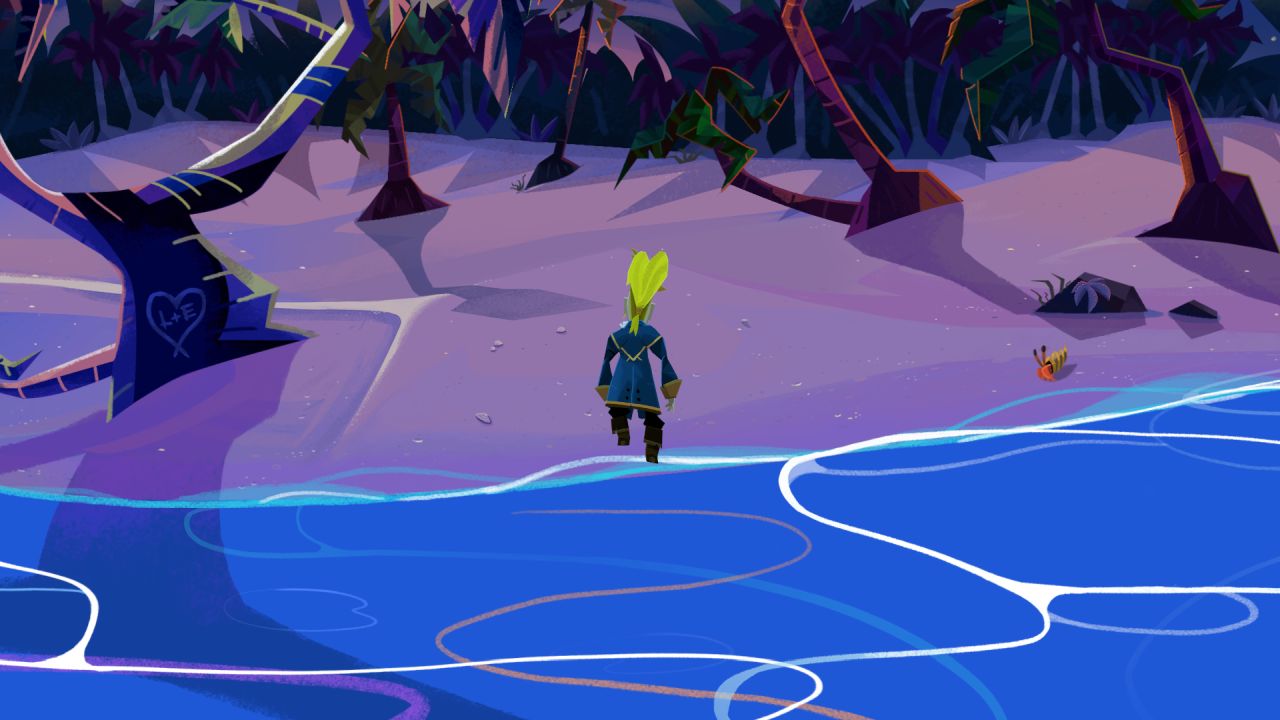 Return to Monkey Island is like a well-preserved shipwreck under the ocean. It looks a bit different, lacks some functionality, and does not quite go where you want it, but that does not mean you cannot appreciate it or reminisce about past voyages. Good logical puzzles and a strong narrative start are its best features, despite some linearity and a weaker second half. The game is rarely hilarious but generally mildly amusing, with nice voice acting and good pirate music. Its art style might not be for everybody, but old places and faces are recognizable. Players that are familiar with previous games should enjoy the nostalgia, but not every dive into the past brings up treasure.

Our ratings for Return to Monkey Island on PC out of 100 (Ratings FAQ)
Presentation
70
The art design is subjective, but not always great for puzzling. Odd perspectives and cutout characters don’t always look pleasant, despite good contrast. At least the pirate music and voice work is good.
Gameplay
70
Most puzzles are logical and the simplified interactions bring this into the modern age. On casual the puzzles are easy and get easier. Hard is a better challenge, despite a few unnecessary steps.
Single Player
65
The story has a strong start as Threepwood seeks to get aboard LeChuck’s ship, but the final stages do not have great pacing. Also, despite attempting many jokes, it is not always funny.
Multiplayer
NR
N/A
Performance
(Show PC Specs)
CPU: AMD Ryzen 5 3600
GPU: ASUS 6700 XT DUAL OC 12GB
RAM: 16GB DDR4
OS: Windows 10 Pro 64-bit

90
No performance issues or bugs were observed.
Overall
73
Return to Monkey Island is a good modernization of a classic pirate tale, even if it overuses nostalgia. Its array of sensible puzzles and light humor outshine pacing issues and a discordant art style. 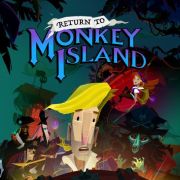 All videos for Return to Monkey Island (2)
Advertisement ▼