Pokémon video games have been imitated and copied countless times, and for a good reason. It's arguably one of the most successful franchises of all time and garnered quite a cult following, as the simple premise of catching, raising and battling monster-like critters still resonates with players today. But with a franchise spanning over two decades, they've naturally shaken up the formula from time to time to keep things engaging. This usually takes the form of a new mechanic introduced to that generation; Mega Evolutions or Gigantamax Pokémon are great examples of this. 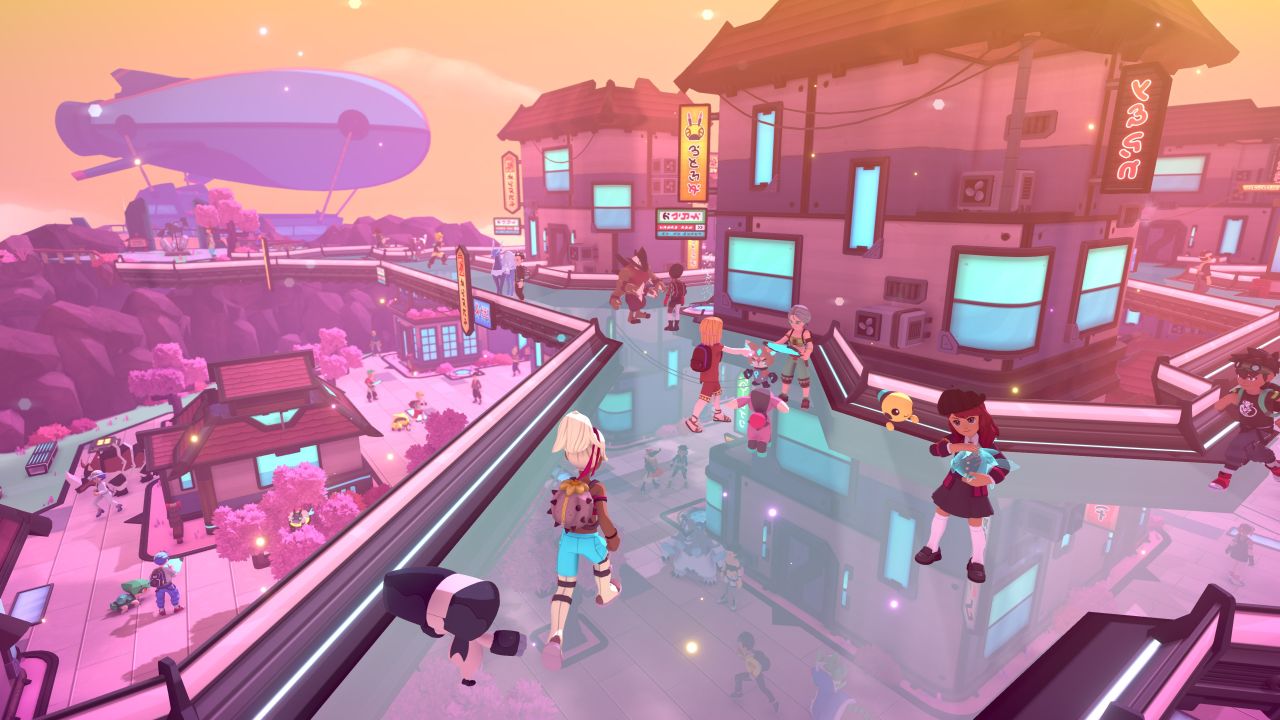 Temtem doesn't introduce any flashy gimmicks, and at face value, it may not appear to do anything to rejuvenate the monster-capturing game model, as it has the same core DNA structure as Pokémon. However, the developers behind the game, Crema, are cottoned on to what has made Pokémon such a captivating franchise. Instead of introducing drastic changes to the set-up, they have cleverly transferred this to an MMO format and subtly reconceptualised the battle system just enough to create its own unique footprint.

The story takes place in the world of the Airborne Archipelago, a province occupied by both humans and creatures called Temtem. You assume control of a young aspiring tamer on the day of their apprentice eve, which is a glorified celebratory day of receiving your first Temtem. After a few pleasantries from the locals, you head out to find Professor Konstantinos to receive your first Temtem companion. From here, you embark on your quest to be the greatest tamer around by challenging the eight Dojo Masters. The plot is brimming with charm as there are many upbeat and satisfying moments, as you often assist the Dojo Masters by helping out the local community, before challenging them to a showdown. This leads to a nice storytelling pacing, and with each Dojo Master you take on, you slowly see growth in becoming a tamer.

The gameplay is broken into two primary sections: exploring the environments by travelling through routes that are often linear paths before reaching a town, and battling other tamers. Your initial priority will be building a team of six members if you want any chance of beating your opponents. Each Temtem can inhabit one or two typings, and with twelve different typings in total, you'll want a diverse team to countermove any situation. To find potential new members for your squadron, you must walk across tall grass until you encounter a wild Temtem. To capture it, you will need to use a Temcard, which works along the same lines as Pokéballs; if you weaken the Temtem first, you have a much higher catch rate. 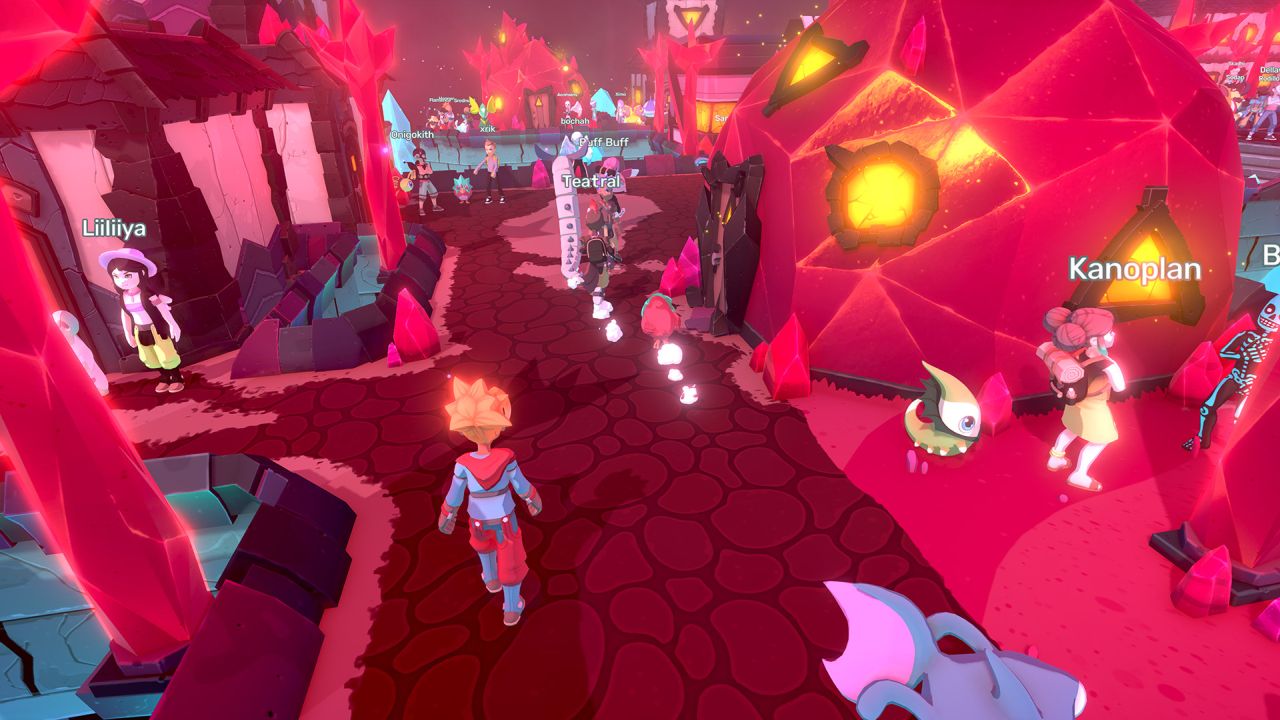 During your journey, you will travel through the six different islands of Airborne Archipelago. These routes between towns are considerably big and can even sometimes take over an hour to complete if you decide to interact with everyone on that path. Nearly every location will have some keen-eyed NPCs looking for a battle or NPCs looking for assistance, like asking you to help them acquire an item. Luckily these quests are not too strenuous and usually entail you backtracking to previous locations. Along the way, you'll also have a habit of bumping into the mysterious organisation Clan Belsoto, which has many uncanny parallels to the infamous Team Rocket. Unsurprisingly, Clan Belsoto is often up to no good as you'll find yourself taking a detour like a student on a gap year to foil their nefarious plans during your adventure.

After you've built a good enough team, it's time to throw yourself into battling other tamers, as these components are where the heart of the experience truly lies. The combat adopts a 2v2 approach, also known as double battles, which involves each party sending out two Temtem; the winner is the person who knocks out all the opposing sides' Temtem first. Besides the double battles that are stereotypically seen in the online competitive Pokémon battling scene, you wouldn't think they've changed much from the formula. Each turn, you can either attack with one of four moves, choose to return a Temtem from the field back into your party in exchange for another, or use items to recover health or status effects. It even embodies small iconography moments, like how you view your Temtem from behind to the monsters’ sound effects when they enter the field.

But with closer inspection, the developers have altered the combat system by scrapping the iconic PP used to perform attacks and replacing it with a stamina bar that highly complements the turn-based combat. Every time a Temtem executes an attack, stamina will be consumed from the bar. If they deplete their bar so low that they have insufficient stamina to perform an attack, the Temtem will then overexert and hit themselves, resulting in friendly damage. Replacing this system might not sound like a big deal initially, but you'll soon realise that this stamina bar adds an extra layer of difficulty. Each move played out almost becomes a meticulous chess match. For example, should you attempt to take out the opponent's Temtem with powerful attacks, which are usually paired up with high stamina demands, or should you opt for lower-end moves with lower stamina needs and slowly chip away at your adversaries? This makes you constantly aware of the strengths and limitations of each Temtem because if you are not careful, an opponent can wipe out your whole team within a few moves, even in the early stages of the game. With this subtle change to the turn-based combat system, it's easy to see how Temtem will appeal to players who enjoy the highly competitive nature of Pokémon, as you can't repeatedly pick the same move without repercussions. 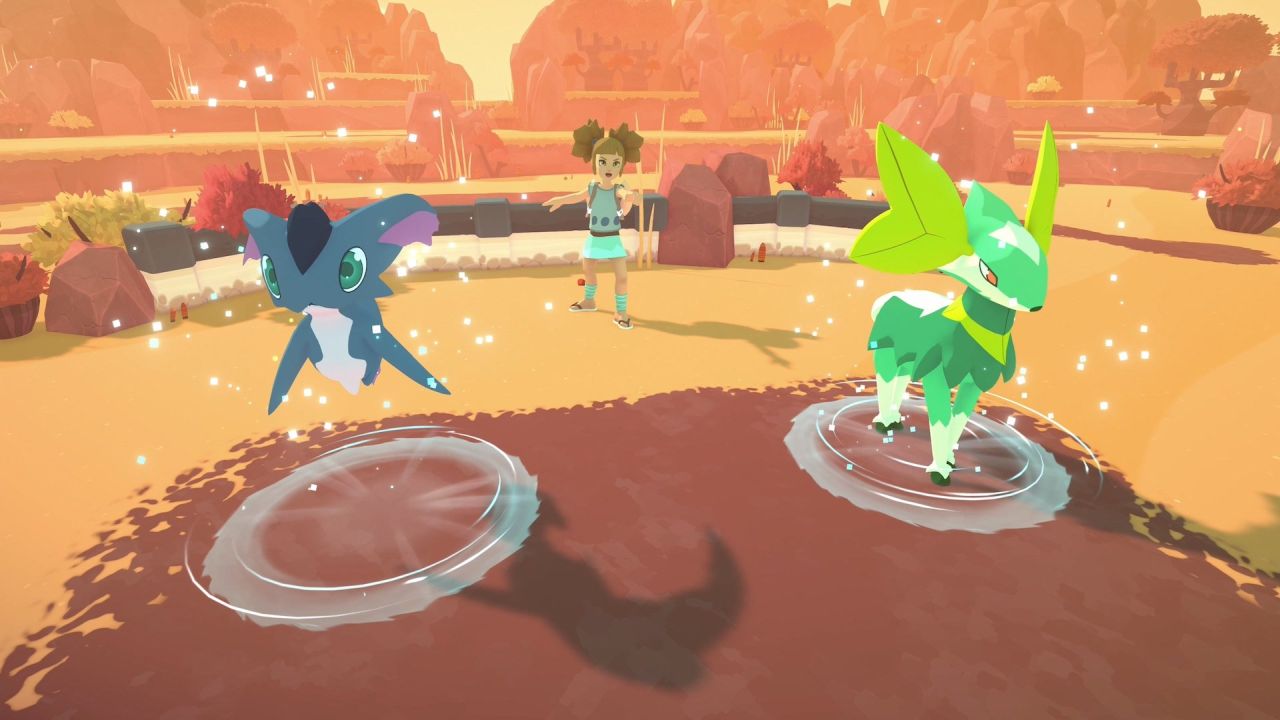 The Temtem are also brilliantly designed and are perhaps better than the recent designs of Pokémon. Within the first few acres of grass are some interestingly designed creatures, like a duck ironically wielding a trident and a pig fashioning some stylish wings, proving pigs can fly in the land of Temtem. Evolutions are also present, and there is a lot of continuity between evolution lines as they keep a lot of characteristics of their predecessor. When a Temtem evolves, which usually happens through gaining levels after earning EXP in battles, its base stats and move pool can also widen, dramatically giving you the edge when fighting.

The terrains have a great art design as you traverse through stylish landscapes such as the shimmering sea lines of Deniz, the overgrown treetop canopies of Omninesa and the intertwining boardwalks of Kisiwa. What's more, these landscapes are rarely dull or empty looking, as the hustling atmosphere you'd expect to see in an MMO is in full swing here, as many active players are often frantically running around the environment. Another aspect that helps bring the world to life is that the Temtem you designate at the front of your party will actively follow behind you as you travel. In accumulation, all these details help fill the world full of character, giving it an energetic and lively mood as you never quite know what you might see next.

Naturally, as the game is entirely online, you can play Temtem alongside a friend; unfortunately, I didn't get an opportunity to do this myself. However, there are plenty of other online features to get stuck into, like battling and trading with other players, auction houses, clubs and even local and global chat. It's not the most expansive MMO world, granted, but there is more than enough to keep you occupied. You can engage in battles and trades with other players playing on the server by sending an invite that they need to accept. I didn't run into any problems setting up any requests, and it was swift to get everything started. Playing the matches themselves was a smooth experience as well, and I didn't run into any issues. While completing the primary campaign, which took approximately forty hours, my connection was lost twice, but I was able to get back into the game rather promptly, so no harm was done. Still, it's worth noting that the game is unplayable solo without an internet connection. On the subject matter of the game's performance, another minor critique is when too many players congregate in one area, I occasionally experienced momentary lag when entering a new location, but this didn't affect gameplay. 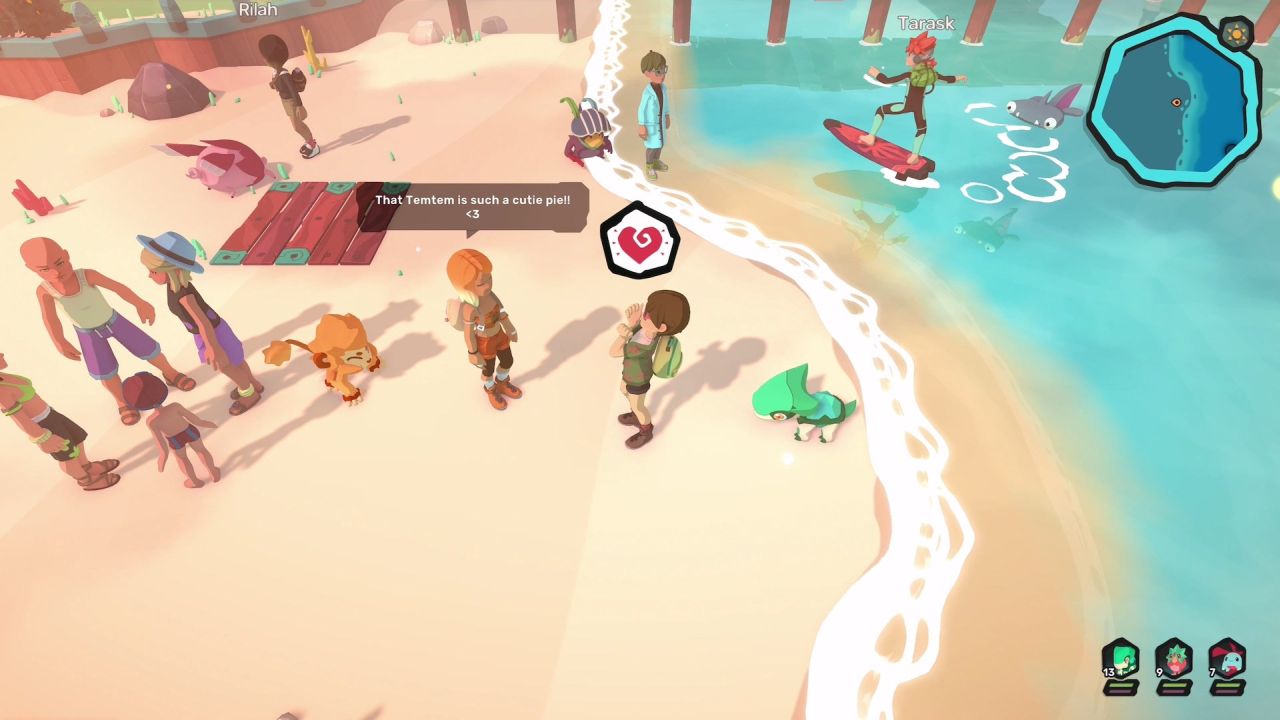 Temtem is an excellent addition to the monster-capturing genre as it applies the well-established and engrained blueprint of collecting and raising creatures but is able to forge a unique identity in the midst of it. The game is a fantastic alternative if you want to explore a new world with stylishly designed monsters by your side that will be sure to satisfy the most hardcore Pokémaniacs. Although, if you don't dabble with the genre often or are dead-set that the Nintendo juggernaut is the only one in this space who can pull it off, then this game won't be for you. Despite a handful of performance issues, it still delivered a great overall experience that's definitely recommendable.

Our ratings for Temtem on PC out of 100 (Ratings FAQ)
Presentation
80
The game world has a great art design that is accompanied by some decent-looking landscapes. In addition, the Temtem themselves are excellently designed.
Gameplay
82
Battling is the true highlight of the experience, as the stamina bar that is featured in the turn-based combat requires you to keep thinking one step ahead.
Single Player
70
The plot is reasonably fun to play through, even though there is sometimes a bit of cheesy dialogue. There are a ton of side-quests to occupy your time.
Multiplayer
80
It's pretty simple to challenge other players on the server with no hassle of booting up a match. You can also play the game with someone else in online co-op.
Performance
(Show PC Specs)
CPU: Intel Core i7-10750H
GPU: RTX 2060
RAM: 16GB DDR4
OS: Windows 10

68
You will occasionally lose connection to the server depending on your internet speed, although this does not impact any progress you've made. Also, momentary lag can occur when many players appear in one spot.
Overall
72
Temtem is unequivocally a homage to the Pokémon franchise, but it does bear its own unique traits. The game is worth checking out for anyone looking for an experience that harbors the core DNA of Pokémon with an alternative take on the battling system. 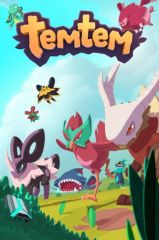