Gamers that enjoyed playing as a cat, in Stray, might be on the hunt for similar experiences. Endling is another animal-adventure that may have caught players’ attention due to its obvious comparisons. Instead of a cat, you play as a fox. Instead of a third-person platformer through a vertical world, it is a 2.5D platformer that takes players around fixed, linear paths. Its biggest point of difference is that it opts for more of a survival experience where you are a mother fox who must feed her cubs and avoid human threats. While Endling does have an appealing art style, it struggles under dreadfully monotonous gameplay. 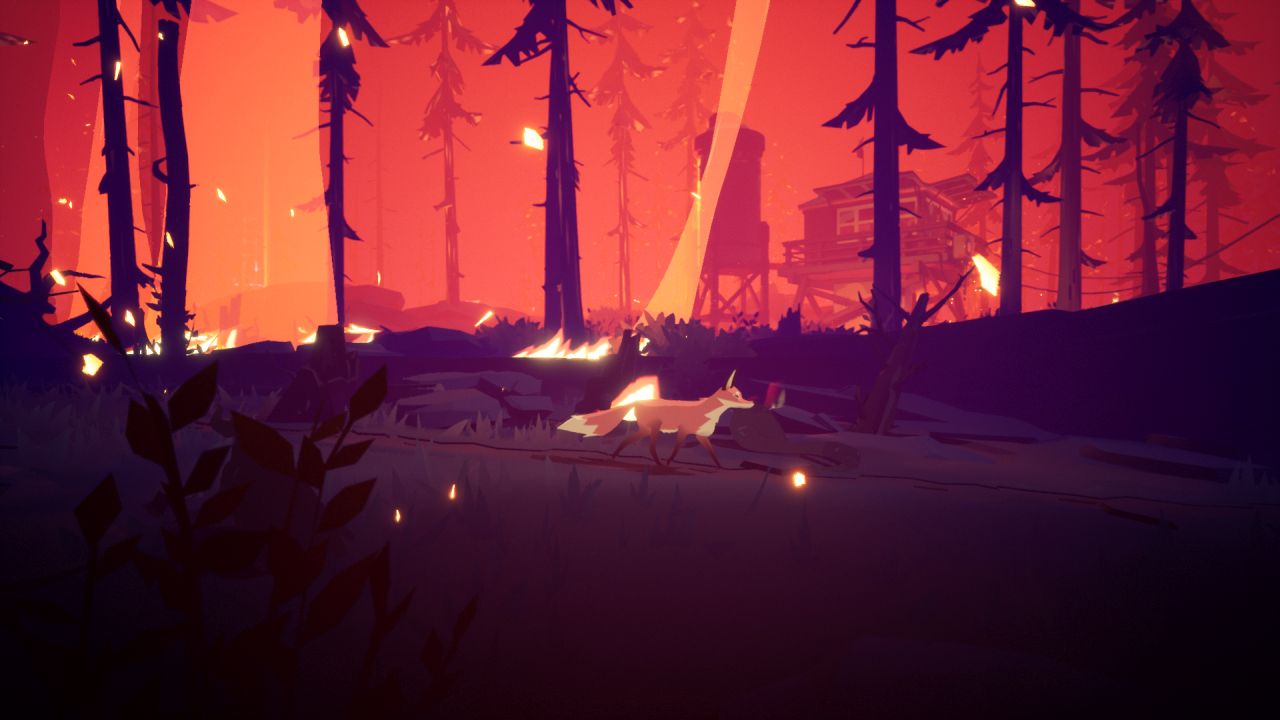 The story in Endling is minimal and told via the world. At the start, you are a fox on the run through a forest fire. After finding refuge within a burrow, which becomes your first lair, you give birth to four cubs. As a mother fox, you have to keep the cubs fed during the night and return to the lair before dawn. Not long after the beginning, one cub is stolen by a heavyset scavenger man with an enormous rifle. You give chase, following the scent, but the track goes cold. As the game continues across several weeks, the cub’s scent will return every once in a while, in forests, across creeks, around factories and shacks, and through industrial zones. Each time there will be ghostly snapshots of the scavenger and the cub, many of which are just action poses that don’t tell much story. The trail always goes cold after three ghostly vestiges, and so the game progresses with the mother fox trying to keep her cubs alive, occasionally getting a reminder of what is missing.

While the world in Endling is fully 3D, the fox (and trailing cubs) can only travel along linear paths that weave through the world. These paths intersect and the mother fox can then switch to the connecting track, changing the navigation route like switching train tracks. The camera adjusts and glides around as the paths change, so most of the time it is presented like a 2D platformer. Unfortunately, navigation and exploration is extremely boring because it is so rigid and repetitive. Many of the world’s areas are also arbitrarily restricted with blocked paths. Some routes can be opened to create shortcuts, by approaching from the rear, but most blockages are there until the game says it’s time to explore somewhere new, where there might be another lair to utilize. 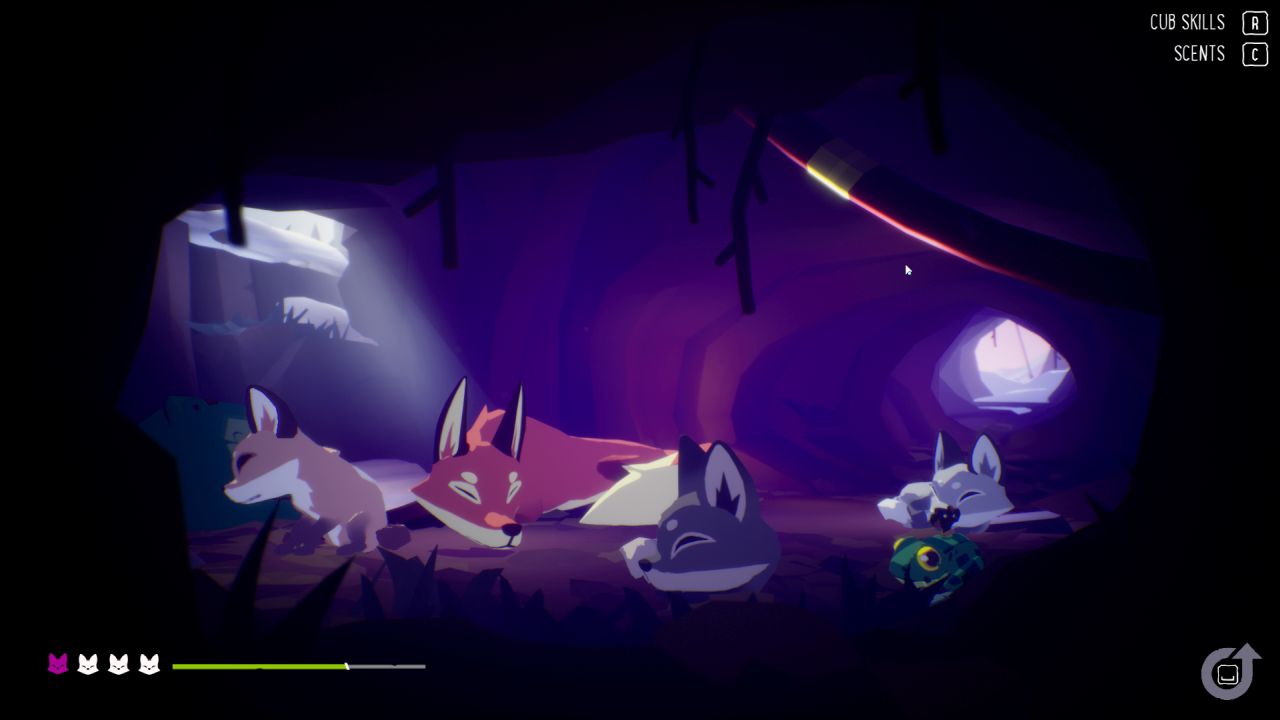 Keeping the cubs alive is just about keeping them fed. They follow closely, although if you run too far ahead they might get lost and you’ll have to backtrack. The food choices are varied but function the same. Birds, fish, rabbits, mice, and chickens can be grabbed and dropped for the cubs to eat. Some of the prey requires sneaking or hiding in a bush, but it’s never a challenge. There are also trash bags, with food inside, and fruit bushes. Many food sources are depleted permanently, but as long as you’re not over consuming, there is plenty of grub to feed all cubs up until the finale. If the food meter does fall to zero, one cub will stop following and whine for sustenance. Then the race is on to get food. But since all the cubs share the same food meter, you can leave the hungry cub behind and just feed those that managed to keep up.

As you explore the world, cubs gain skills. Most skills are just used to access more food, which makes progression unrewarding and bland. One cub can learn to climb trees to get edible eggs and another can slip through a gap to get food behind a wall. The mother fox just has to face the right way, and be in the exact position, so the player to press a button, for these skills to work. Otherwise, the cubs are completely autonomous and merely follow. Although the majority of skills are food related, one cub does learn to defuse the rare traps set by humans. This can be handy although traps can be jumped over easily and cubs just walk through them anyway. 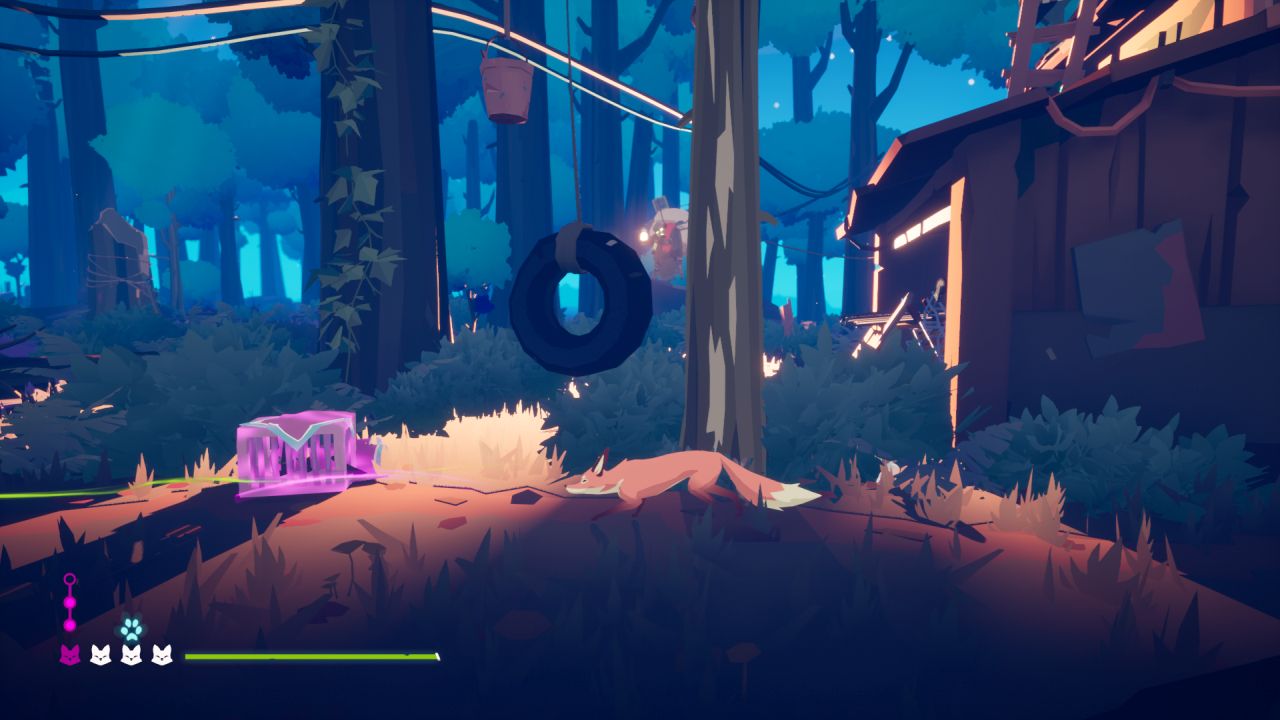 The biggest danger comes from the roaming humans. Some humans loiter off the trail and will try to catch you with their weird crouch-walk. They’re slow and easy to avoid. The furrier is a faster and deadlier human, but tree stumps can be scratched to lure him away. And the final human threat is the scavenger that stole the cub, who will stand in place and sweep a circular zone with a gun. Avoiding this just requires basic sneaking and a modicum of patience. So most of the enemies are not much of a threat, but they are a regular annoyance that block routes and make navigation even slower. The only times you might run into trouble is by running too fast, as the camera angle might not show the upcoming danger in time. But you get one free escape, which gives the mother fox a temporary injury that only slows her down briefly.

Endling fails to build a good connection with the cubs that follow you around. The little blighters can be cute sometimes, like in the few cutscenes you get in the lair or during the rare story moments. Apart from that, they have no individual personality. They cannot be hurt by traps or humans, so it’s best to just run off when danger is near. Their skills are mostly just used to feed themselves, which makes sense but means they’re not helpful enough. They’re also just a bit too slow, so you have to occasionally pause to make sure they keep up. It is a shame that the minimal connection with a few of the human characters exceeds the one with the cubs.

One aspect of Endling that does stand out is the visual style. It uses colors well to create plenty of contrast and pleasant vistas. The world around the linear paths is detailed with buildings, fences, and other traces of human occupation. Environments change too; trees are felled and trash accumulates—the idyllic forest becomes a sad junkyard. Human threats (and friends) have a characteristic design that fits with the rest of the visuals. Although it’s not going for realism, because it uses solid colors rather than textures, it pulls off its artistic look consistently. 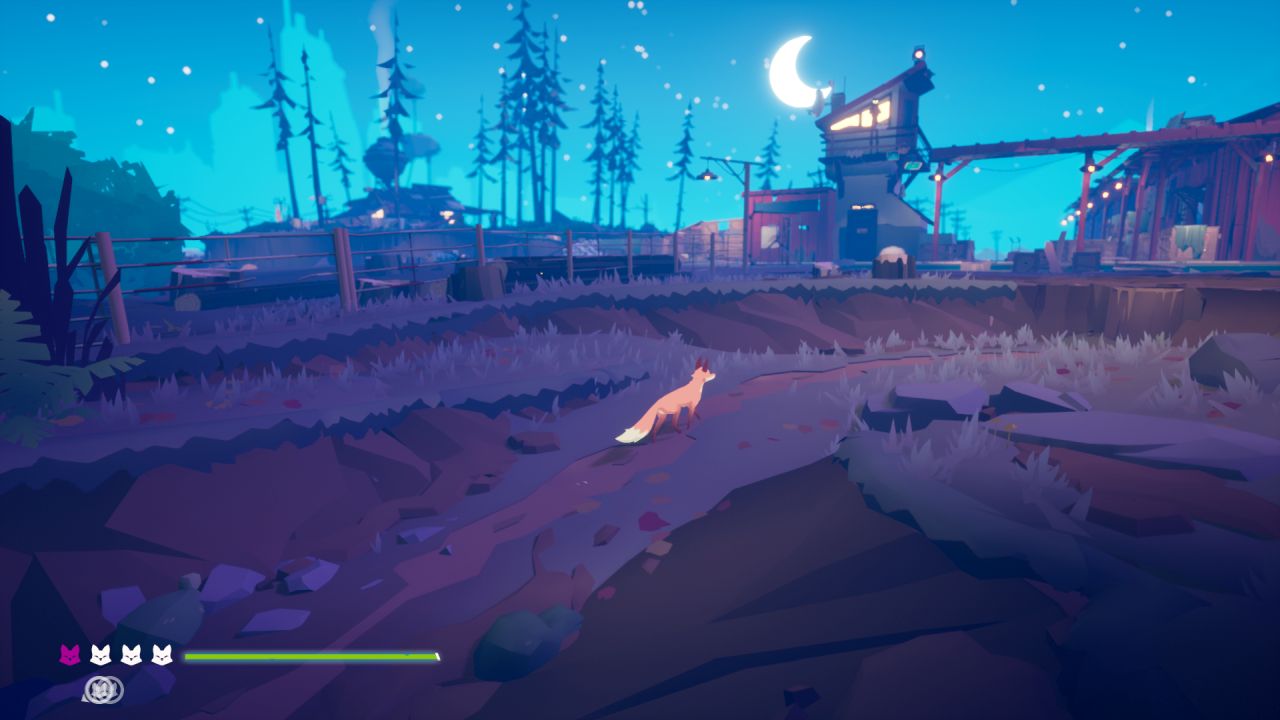 Endling is a dull and middling animal-adventure game with few redeeming qualities. Despite its occasional animal charm, it falters massively when it comes to gameplay. Exploring boring linear paths with annoying human threats gets tedious after just an hour, and yet the game will take three times longer to complete. Feeding the cubs is a regular nuisance task, and the game struggles to build a connection with the hungry creatures under your care. The cubs' food skills make the progression unexciting and locked paths mean exploration is limited. Even though Endling’s visual design is quite appealing, gamers should hunt for another animal on a different path.

Our ratings for Endling on PC out of 100 (Ratings FAQ)
Presentation
75
The game looks nice with a good use of colors and decent fox animations. The world also changes as the days cycle, which is a good visual break from the monotony.
Gameplay
40
Feeding foxes gets boring and there is not much else interesting to do with such restrictive exploration and bland skills.
Single Player
50
With a story told intermittently via scent trails across 3-4 hours, it contains minimal narrative content that is often contrived.
Multiplayer
NR
N/A
Performance
(Show PC Specs)
CPU: AMD Ryzen 5 3600
GPU: ASUS 6700 XT DUAL OC 12GB
RAM: 16GB DDR4
OS: Windows 10 Pro 64-bit

90
No performance issues or bugs were observed.
Overall
58
Endling may look nice, but it is a monotonous animal adventure with simple fox-feeding gameplay, bland skills, and restrictive exploration. 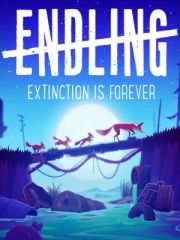