A one-way ticket to the criminal underground

Midnight Fight Express creates an experience embroiled with pulse-pounding breakneck action as the combat attempts to emulate the feeling of one big movie-action sequence. You'll immediately begin jumping from rooftops and punching gangs of lowlife thugs within moments of playing. The big question is, can it hold your attention long-term when held up against some of this year's other beat 'em up titles like Sifu and TMNT: Shredder's Revenge? 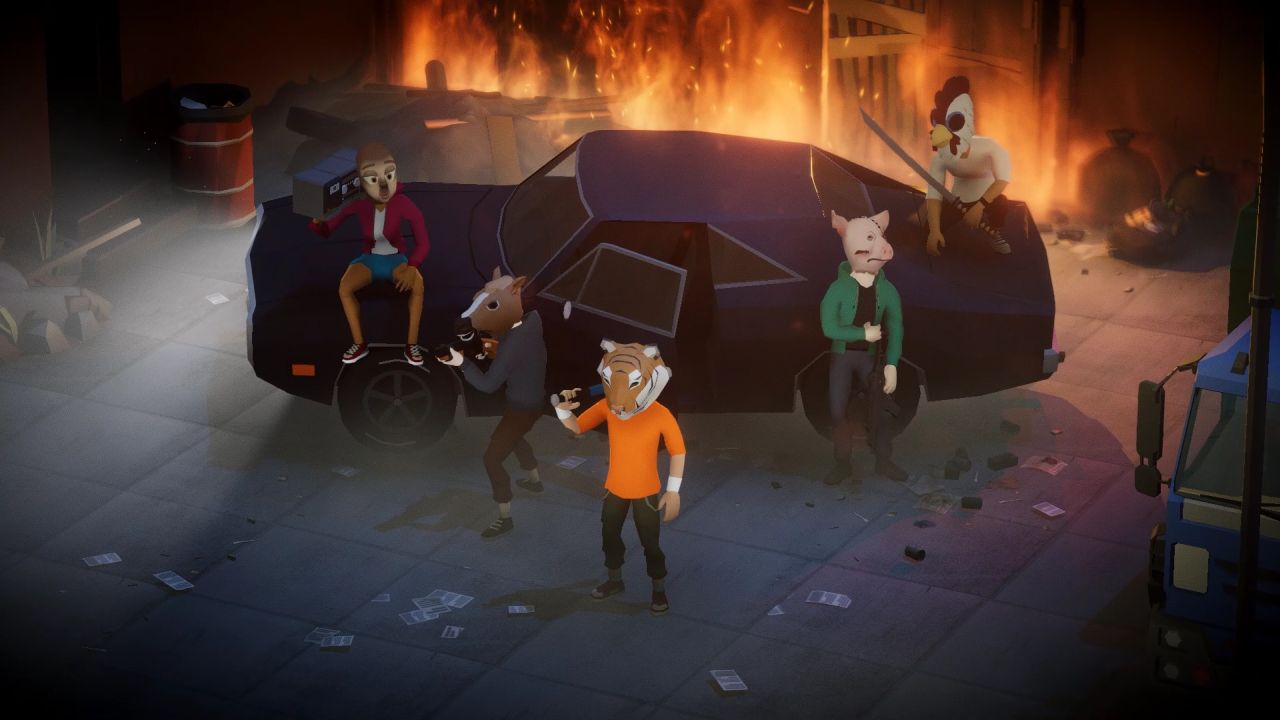 You assume control of an individual called babyface, an amnesiac reformed felon living out his days, until a package suddenly turns up at his doorstep, containing a strange drone. The mysterious machine then cryptically proclaims there will be a sinister syndicate takeover of the city. Your expertise from your deviant past could be the difference between ensuring the safety of all its citizens living peacefully and a full-scale criminal overhaul leaving the town devastated by the destruction and at the mercy of evil masterminds. With this newfound knowledge, the ex-reprobate heads out to clean up the dark, criminally infested streets, accompanied by the flying drone companion. The story is reasonably decent for the most part; sure, there are a few predictable plot points in the latter half, but this doesn't take anything away from the experience.

Players are thrown into 3D isometric levels where you'll brutalise hordes of enemies including criminal bozos, gangsters and crooked cops, to name a few. The gameplay is best described as a hybrid offering between Hotline Miami and Fighting Force. The action will immediately draw you in with its high-octane gameplay, filled with insanely violent onslaughts, just like Hotline Miami. At the same time, the combat is similar to Fighting Force as you pummel down waves of mooks with environmental weapons like batons, knives and guns.

You'll initially have straightforward moves within your arsenal, like attacking, blocking, and dodging. For this reason, the first hour of combat is relatively slow until you acquire stars from completing levels, which can be used on a skill tree that will substantially open up your moveset. New techniques vary between using more elaborate melee attacks, parries, unblockable finishers and even grapples, which, if performed accurately, can even disarm an opponent if they are holding onto any weaponry. This is when the action starts heating up, as opening up these skills will allow you to build up combos effortlessly while fighting, reminiscent of the Batman Arkham games. 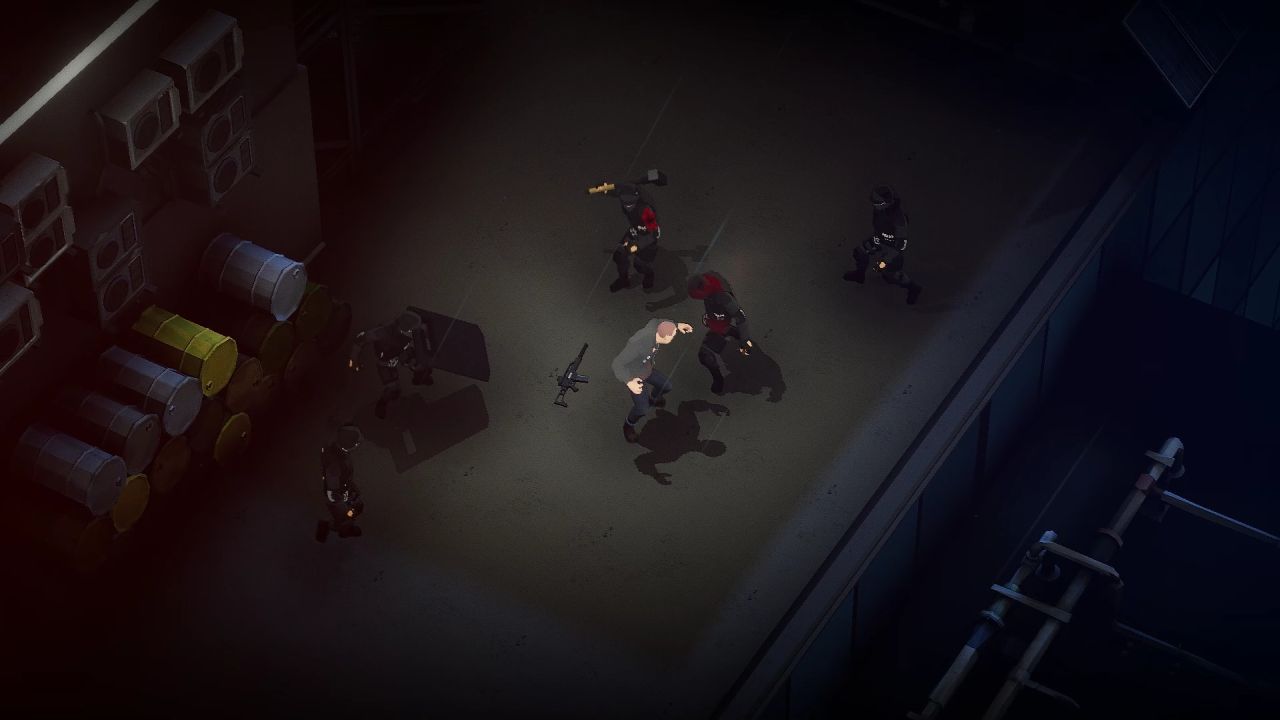 Furthermore, you can also use environmental items found on the ground to embrace the dirty street fighting mentality. Sometimes, using these environmental items and conjuring up your next plan of attack can be more fun than the actual hand-to-hand combat, as it's enjoyable to scope through the levels and kill your adversaries in exciting ways. Some objects will be simple to use, like picking up propane cylinders will instantly lead to your character throwing them into your opponent's direction, which will explode on impact. Whereas other items will be used as a weapon, like assaulting an enemy with a knife will dramatically leave your character drenched from your victim's blood. Another method could be grabbing a gun, shooting enemies, and throwing the firearm at an enemy after it's run out of ammo.

Because there are so many ways you can choose to kill opponents, it's great to go back to previous levels. The game massively incentivises this as well, as there are challenges to complete on each stage, like collecting golden teeth from the enemies you ruthlessly annihilate. After completing each mission your performance will also be ranked, with the almighty S rank being the top grade. There are separate leaderboards for your score and time, where you can see how you are fairing against everyone else.

Alongside earning stars after completing a level, you'll be rewarded with coins, which you can use at the hideout in-between missions. This is where you can upgrade your moveset, and change your character's getup. There are a ton of outfits available for you to swap into, which helps make your character feel personalised; my only gripe is that you can't change their hairstyle. It's incredibly minor in the grand scheme of things, but it seems like such a strange choice that you can pretty much alter everything else of their appearance, even dye their hair into bright colours, but a hairdresser is a step way too far. 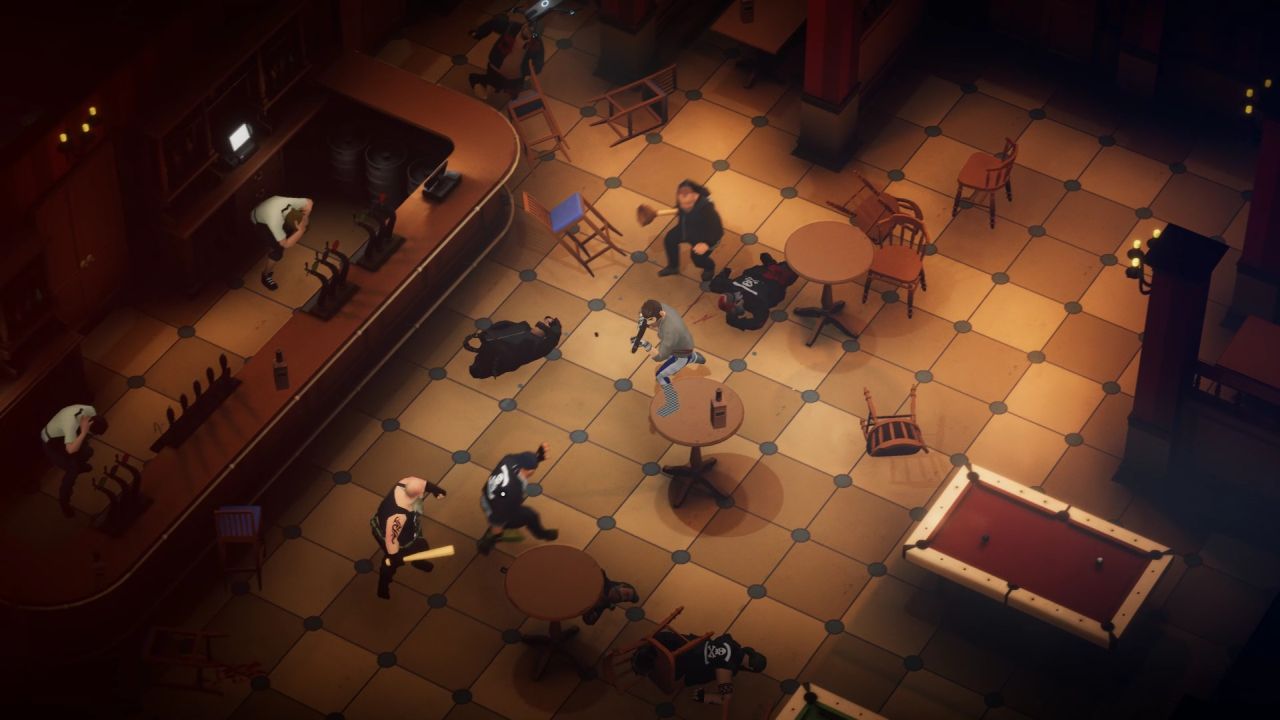 Some levels deviate from the beat 'em up gameplay and are vehicle levels instead. These segments often adopt twin-stick shooter mechanics, varying from being in a speedboat shooting down a helicopter to driving down a highway in a motorcycle chase. This might not sound like a terrible addition at first, as you may think it changes the pace of gameplay, but the levels feel rather jagged and unpolished throughout. These portions are simply mundane, and you'll want to finish them as soon as possible so you can promptly return to important matters like punching bad guys in the face.

In total, there are forty-one levels, which are relatively short, and usually require you to go down a straight path to reach a single destination. That being said, combat can sometimes be challenging, even if you are a devoted fan of the genre. You'll probably find yourself occasionally dying, even with all the upgrades you've attained, until you've perfectly learned where all the enemies are positioned, which adds a bit of length to each level. However, don't worry; checkpoints frequently appear, and you rarely lose any progress, making the title somewhat newcomer friendly.

As mentioned before, Midnight Fight Express is clearly highly influenced by big-budget films, so much so that even some of the level designs feel like they were pulled straight out of a movie scene. Mission Impossible franchise seems to have inspired two levels, with one featuring a helicopter chasing down our protagonist on top of a train while another sees an all-out brawl breakout in a bathroom. Other nods are much more subtle, from the characters' names to how they're even designed. 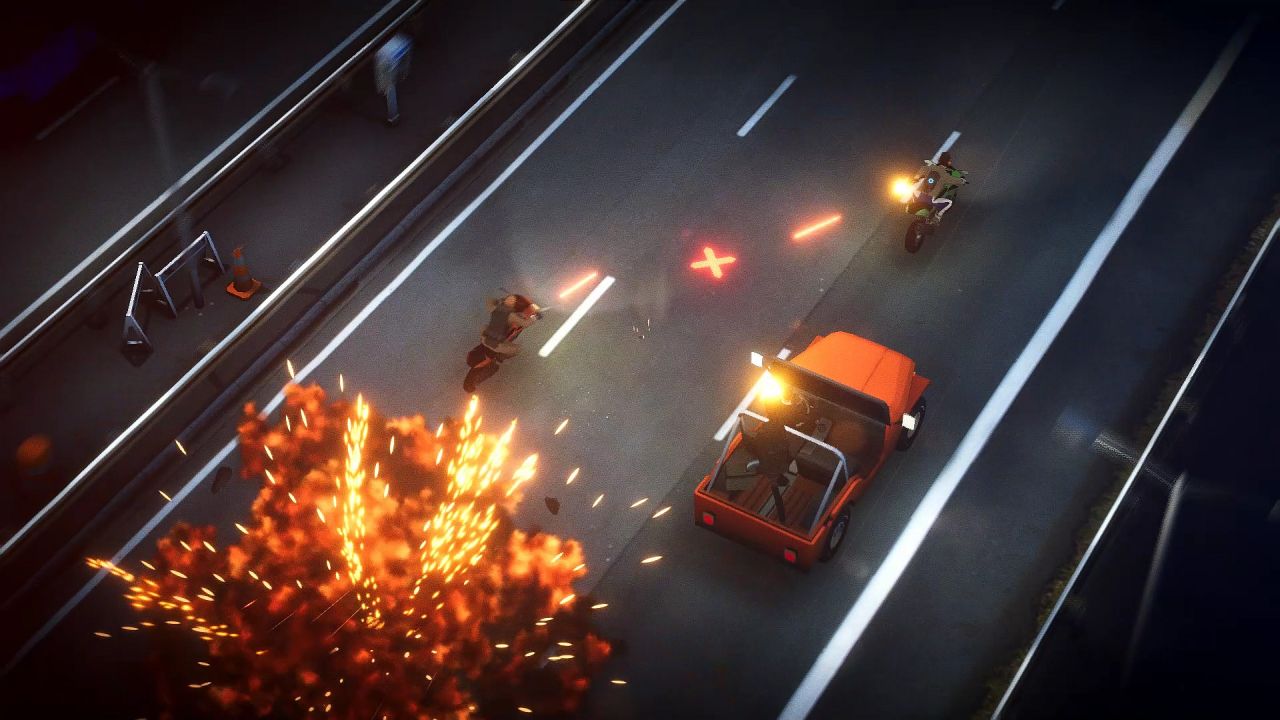 The top-down isometric perspective allows the distinctive look of these almost cartoonish but serious-looking visuals to pop out. The entire aesthetics of the world make the midnight hour come alive, as it is covered from head to toe with lights and textures that nicely round off the hustling nature of the city's atmosphere. It's the small details that really bring the levels to life, from the florescent glowing neon lights racing across the busy dance floors of nightclubs, urban streets that are dimly lit with dark shadows leering around every corner, to the murky septic tanks carrying away raw green sewage in the forgotten sewers of the city. The music perfectly accompanies the late-night ambience and high-intensity action with its electro-driven soundtrack, composed by Noisecream, who previously did the soundtrack for My Friend Pedro. What's more, the combat is also motioned captured by stuntman Eric Jacobus, who is notorious for doing the motion capture for Kratos in God of War, which makes some of the combat action sequences look flat out impressive for a brawler game of this kind.

Midnight Fight Express offers a high-energy action experience as it attempts to convey the feeling of putting you in the shoes of a protagonist of a big-budget film, and any movie enthusiast will surely enjoy this aspect. However, if you're not the biggest fan of beat 'em up's, there are probably other titles in the genre you are better off sticking with, as Midnight Fight Express doesn't elevate or bring anything new we haven't seen before. Alongside that, there are a few shortcomings, with some of the levels being relatively brief to the inclusion of vehicle-styled missions, but overall, it's an entertaining and brutal brawler, and it was a blast to play during my eight hours with the game.

Our ratings for Midnight Fight Express on PC out of 100 (Ratings FAQ)
Presentation
75
The levels are presented in a 3D isometric linear design that visually looks good for an indie title. This is accompanied by some wonderfully small details present in the urban nightlife you travel around.
Gameplay
75
The high-energy combat has a lot of depth in how you plan your next move, and earning more techniques little by little keeps the game appealing. Unfortunately, some levels are short, with the vehicle missions being disappointing due to jagged controls.
Single Player
65
Each level captures the feeling of one big movie-action sequence, which helps with the adrenaline-pumped action. The narrative is mainly enjoyable, although there are a few predictable plot points.
Multiplayer
NR
None
Performance
(Show PC Specs)
CPU: Intel Core i7-10750H
GPU: RTX 2060
RAM: 16GB DDR4
OS: Windows 10

90
No performance issues were observed.
Overall
72
Midnight Fight Express will largely appeal to movie fanatics, as the beat 'em up combat encapsulates the feeling of one big movie-action sequence with its adrenaline-induced gameplay. 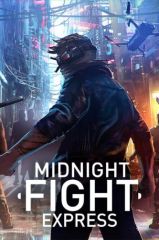