Narrative games often promise choice and consequence, but they rarely deliver in a meaningful way. Typically we get the illusion of choice, as so often was the case with Telltale’s narrative adventures. Even in games where there is a significant diversion in the story, it is often found near the end to save development time. As Dusk Falls is a six-episode adventure game that is proud of its narrative changes because it displays them all on an interactive timeline. It even has a unique design to potentially make the changes easier to implement: all of its characters are 2D photographs, not 3D models. Despite this, the choice and consequence system is fairly underwhelming. While the game offers is a decent story with interesting characters, the second half is flat and its visual presentation has some issues. 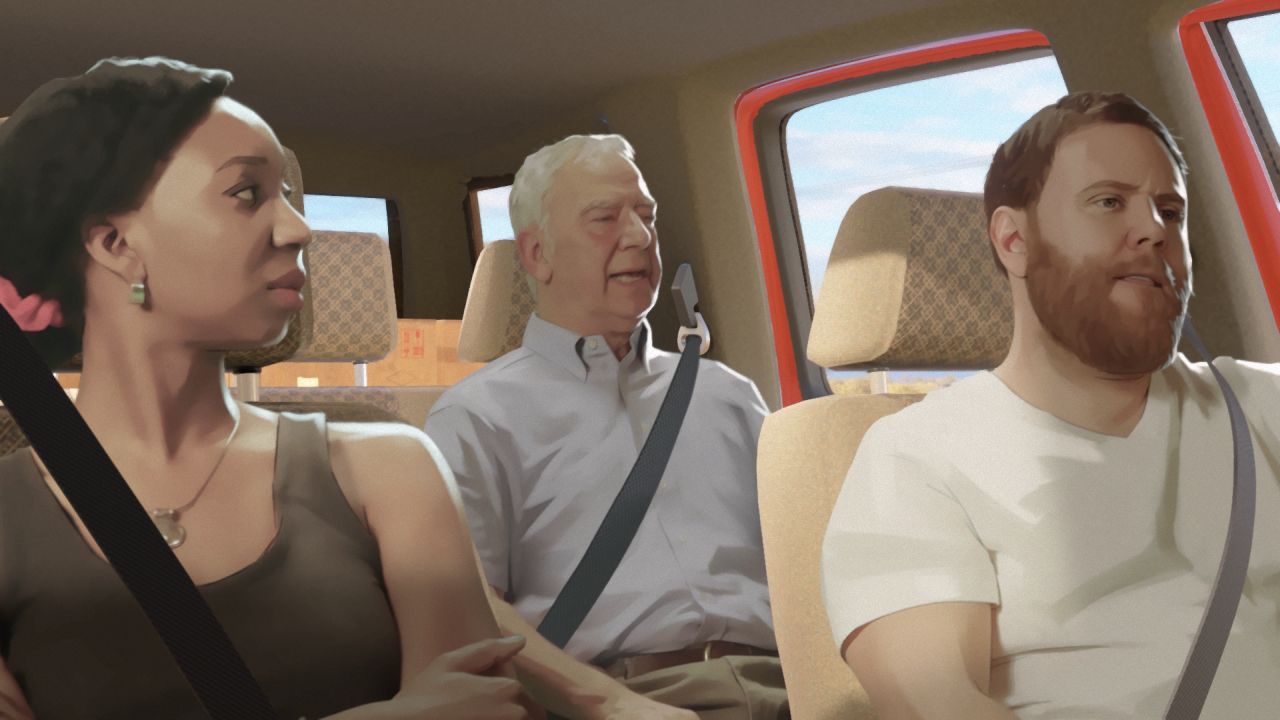 Probably the most striking aspect of As Dusk Falls is its unusual visual style. Each character is a 2D photograph of a real person that has been cutout, stylized, and pasted into a 3D world. This technique results in not having to implement traditional lip-syncing. Characters only have a few poses during conversations to convey emotion and action. Lights from the 3D environment interact with the cutouts to help them fit into the world. Even hair is sometimes animated to create the illusion of wind or movement. For the most part these 2D cutout characters work okay and the positioning and camera angles mean they blend into the environments. Sometimes the illusion shatters though, especially when the entirety of a character is visible; perspective and scale aren't always right, especially in moving vehicles. In terms of the world design behind the characters, the 3D backgrounds are crude, certainly below many of its competitors, with ugly shadows. But this 2D/3D technique works well enough to tell its story.

Two Rock, Arizona is the primary location for the clash between two families: the Walkers and the Holts. Taking place mostly during 1998, the Walker family is moving from California to Missouri, and the trip was going fine until their vehicle broke down. This forces them to stay the night at the isolated Desert Dream Motel. Meanwhile, the Holts have a problem with the law, after stealing from the Sherriff. The armed (and dangerous) Holts seek refuge at the same motel and a hostage situation begins, which escalates when the police finally arrive. What transpires next has lasting impacts on both families. Although the Holts are effectively the antagonists, you play as the youngest Holt brother and experience the ramifications of the family’s actions, and have some influence on how bad things can get.

Like other narrative adventure games, much of the experience is about selecting from dialogue options (with a timer) and very rarely clicking on things in the environment. There are some easy quick-time prompts to perform during action sequences, although many of them have no real impact on events. The “big” story choices are marked clearly, and do not have a timer. Episodes average just a bit under an hour long, so the entire game can be finished in less than six hours. After that, players can dive into previous scenes to explore the myriad of choices, but more on that later. 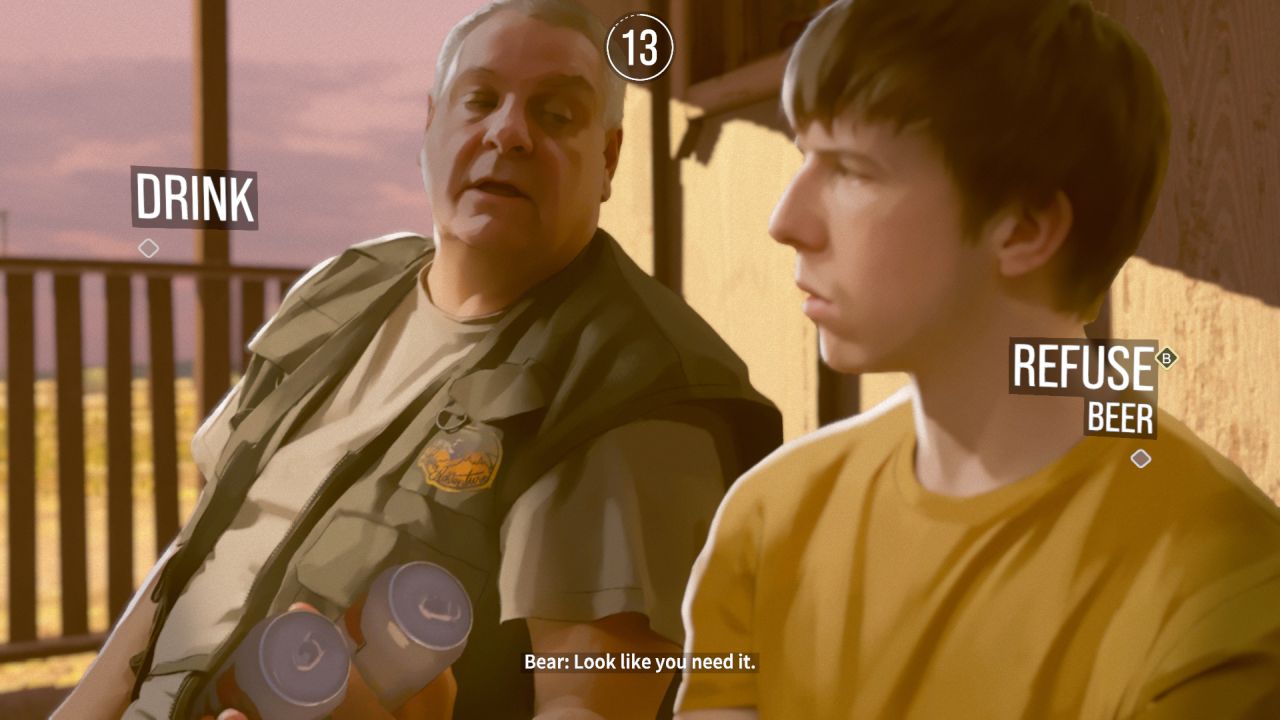 Vince Walker is the main playable character in the first half of the game, and he is part of what seems to be a normal family. His wife and father are along for the cross-country move. And his daughter, Zoe, is only six-years old in 1998 when she becomes a hostage. The whole narrative is actually framed around Zoe suffering PTSD from the incident, fourteen years later, in 2012. This could have been executed better and leveraged more, as you only play as Zoe for some of the final episode. Vince is voiced well by Elias Toufexis (Deus Ex) as he endures a tense situation while caring for his family. There is good depth to Vince too, as his father has recently reentered his life and he is also no longer an aircraft mechanic, for reasons that are revealed.

On the other side of the ledger, Jay Holt is the youngest of the three hostage-taking Holt brothers, and the other major character that players control. Jay is less aggressive than his siblings and keen for a peaceful solution. But he’s also loyal to the family, which raises some good internal conflict. Jay’s brothers and mother (played well by Jane Perry) are all quite interesting and have a unique family bond that gives them authenticity. They’re not completely unlikable either, despite the situation. The reason for them stealing is revealed through some good flashbacks, a few of which are depressing due to their subject matter. But Jay endures all of this, and the game focuses on him running from the law in the final three episodes.

The first half of the adventure is the strongest due to the conflict and tension as the two families meet and clash. The hostage situation heightens all emotions, and the action builds nicely with power struggles. Vince must make key decisions about his family and other hostages, while the police are circling. The police take risky actions, creating some moral quandaries and testing Vince’s resolve. Should Vince befriend the Holts? Who should be sent out when they agree to give up a hostage? The hostage standoff ends powerfully, but the narrative continues - and it’s hard to keep going after such an effective buildup. 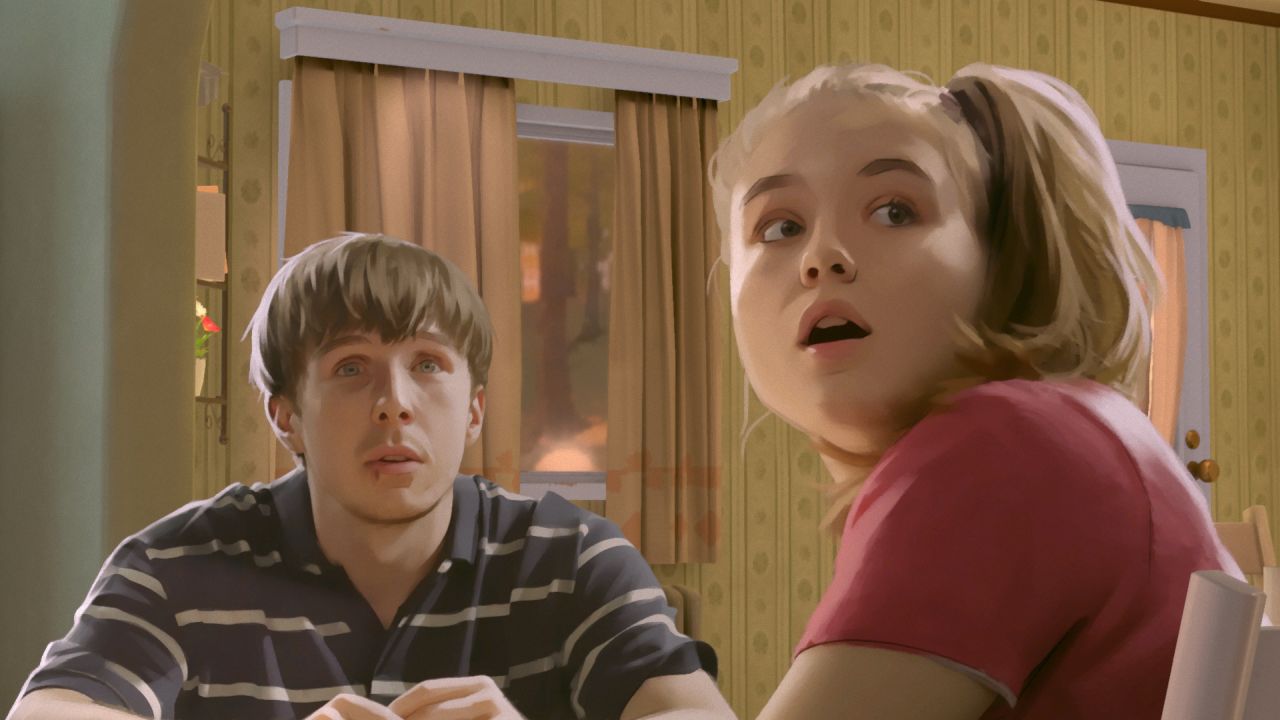 In contrast, the second half is deflating. Focusing mainly on Jay, who is a wanted man, the last three episodes do not maintain the same intrigue. A big part of this is because the Walkers’ story is essentially over, regardless of their fates. Some scenes with other characters are forced; one involves a young kid that explores the woods, which fails to captivate despite having a tangible impact on the story. Another involves an adolescent party, which is quickly forgotten. The strongest parts of the second half is Jay’s interaction with a young woman named Vanessa, although even it feels arbitrary in places. To make the second half even worse, the game ends with a terrible cliffhanger.

Once finished, you can return and play again to see what effect the various choices have on the narrative, and it's a mixed bag. In the hostage scenario, choices will change which people can get injured or die. The end of the third episode also has a few action sequences, depending on how Vince behaved. In the back half, most of the choices alter the outcomes of the Holt family. But like many Telltale games, the main story cannot be changed. Polar opposite decisions still lead down the same path, and so a lot of the “big” moments lead to scenes that are just window dressing when looking at the big picture.

To make the fractured narrative more apparent, the game lets you explore a timeline which shows all the various forks in the road. From here, you can dive into scenes and try out different options to see what happens. Seeing all the fracture points is awesome, as there is less guesswork on how the story alters. The downside is that only some scenes can be entered from the menu, and none of the dialogue can be skipped, so exploring the narrative gets tiresome if you do it more than a few times. 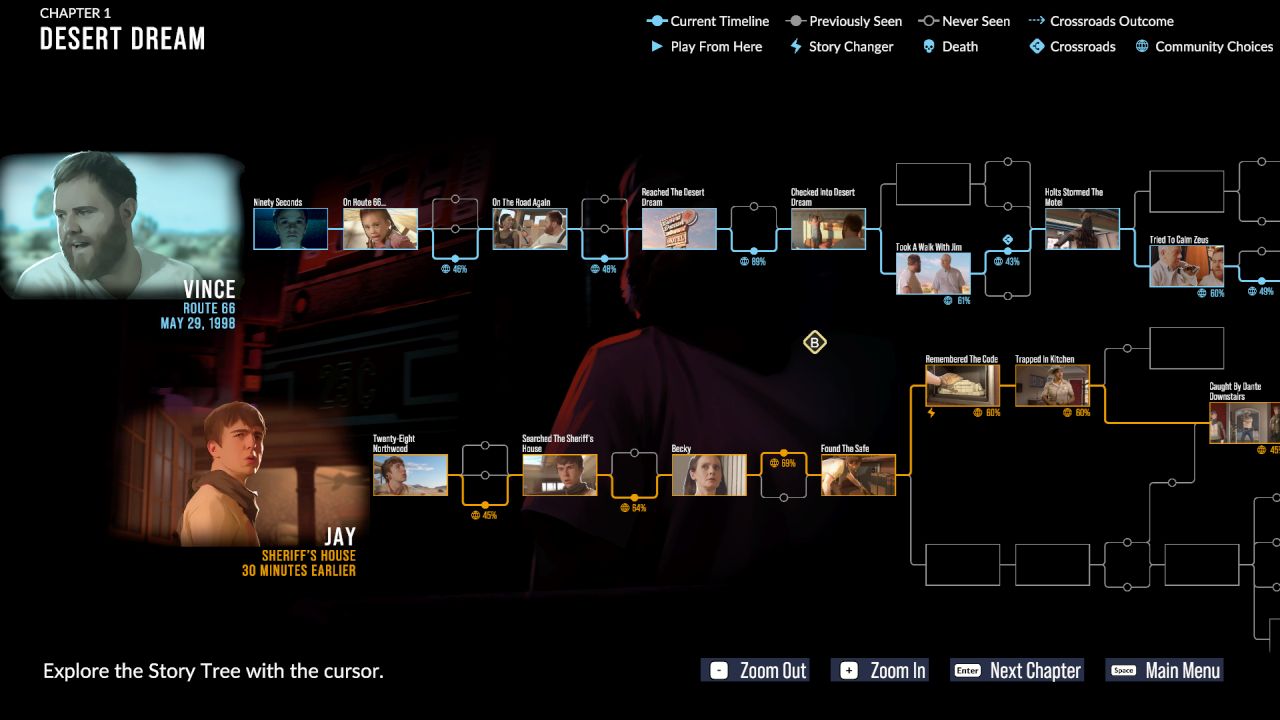 Multiplayer is available, including local and online play, for up to eight players. There is even a companion app in case you don’t have a spare 7 controllers (the app functions as a track-pad to move a cursor on screen). Online requires an Xbox account and is invite-only with no matchmaking. Both local and online multiplayer lets players vote for the best option when choices appear. If you really want to see an option get chosen, there are overrides for every player. But other players can override the overrides, and then the game just picks at random. It is not that engaging to only sometimes get what you want and you’ll have to wait longer for all players to choose. Splitting choices between players also lowers ownership and makes it hard to care, and so multiplayer is only recommended in a party situation when all the good multiplayer games are having server issues.

As Dusk Falls is a narrative adventure game that does some things well. It’s strong first half is aided by some decent characters that have adequate depth. Voice acting is strong for the entire cast, particularly Vince Walker. The excellent timeline feature, showing all the choices and consequences, is worth exploring a bit after you finish the main story. Even the unusual character design, consisting of 2D cutouts, works fine most of the time, despite a few oddities. But the narrative is flat in the back half, with too many filler scenes. And the choice and consequence system is not as expansive as it could have been. Players of narrative games will still likely enjoy As Dusk Falls, but there are a lot of other choices out there.

Our ratings for As Dusk Falls on PC out of 100 (Ratings FAQ)
Presentation
65
The visual style is an acquired taste, with 2D characters and crude backgrounds, but it works fine most of the time. The voice work is quite good for the whole cast.
Gameplay
40
There are some QTEs to button-mash your way through, and some rare scenes where you click on things. The rest is about choosing dialogue and, like other narrative adventure games, this is not something you play for gameplay reasons.
Single Player
70
A strong first half comes about because of the great tension between the Holts and the Walkers. Many of the characters are interesting and it makes decent use of flashbacks to create depth. There are a few different story choices worth seeing, but not that many across the six-hour adventure.
Multiplayer
60
Offering a mix of local and online play, with a handy companion app, the multiplayer functions well enough for up to eight players, but it will probably only appeal to a specific audience.
Performance
(Show PC Specs)
CPU: AMD Ryzen 5 3600
GPU: XFX RX 480 GTR Black 8GB
RAM: 16GB DDR4
OS: Windows 10 Pro 64-bit

90
No performance issues.
Overall
68
As Dusk Falls is held together by a strong start and good characters, despite the narrative deflating itself in the second half. Its choice and consequence system lacks real significance and more polish was needed for its atypical visual design. 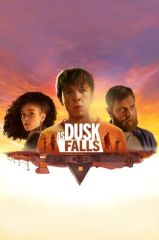 All videos for As Dusk Falls (2)
Advertisement ▼