Darkness under the sea

It's been over a decade since Limbo popularized a certain video game style. A moody, black and white world with a surreal atmosphere that lacks music, and has a variety of puzzles to solve. Many imitators have since followed, with varying degrees of success. The latest entry in this vein, SILT is a debut title from developers Spiral Circus that manages to at least capture the intended atmosphere of such an experience. 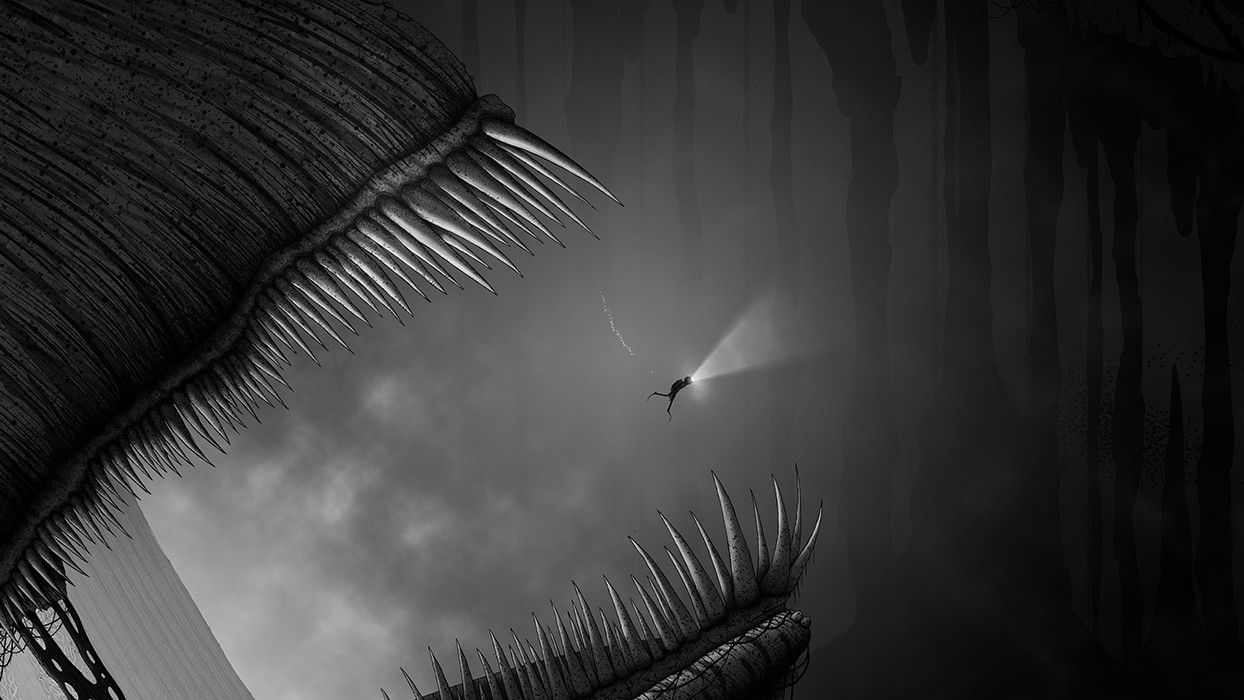 If you've had a chance to check out any trailer or images for SILT, you likely already know what sort of game it is. Indeed, it has a black and white aesthetic, a very moody atmosphere, and lacks a soundtrack. There's no real narrative, either – you get a cryptic poem about a quest to find a great machine and the Goliaths that roam beneath the waves. Like many before it, it tries to imitate the experience of Limbo, the first game that made it big with this kind of visual design. To SILT's credit, it succeeds in properly recreating a gloomy and haunting atmosphere. The haunting underwater environments, switching between foreground and background, and the dangerous inhabitants that you encounter in these depths, are all effective. Players will traverse caves, innards of giant beasts, sunken libraries, and so on. There is no music, with just the equally stirring sound effects from the world and its creatures to keep you company. If you enjoy these games primarily for the black and white style, and atmosphere, SILT is a worthwhile example of the mini genre.

The entire game takes place underwater, which allows for a different style of movement and puzzles since there is no gravity to deal with. The controls are simple, as players assume the role of a diver armed with nothing except their flippers and a head lamp. Movement in the four directions along the 2D levels is okay, but being underwater introduces the typical occasional annoyances with imprecision. You can't turn or stop on a dime, and while that's rarely needed anyway, it's still not overly satisfying to always deal with floaty controls (pun intended). The levels are linear, sometimes you may need to outswim danger by using the boost button, but often you must solve a puzzle before you may progress. Given that the diver is pretty much helpless, the main way to interact with puzzles and the underwater world is by possession of fish. 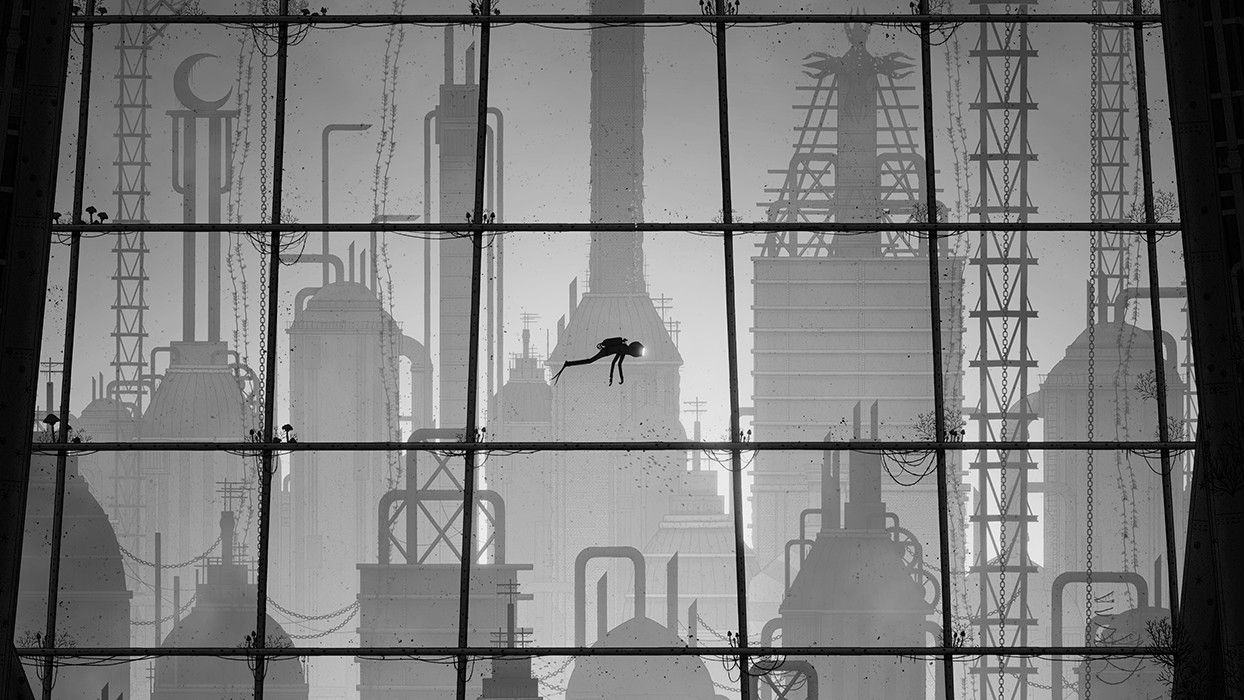 Players are able to use the possession ability to create a beam of light and navigate it towards the fish or object that you wish to control. This leaves the diver in place until you choose to stop the possession, and transfers control to the next entity. The possession beam can be rather unwieldy to guide around to the intended target, which proves extra frustrating when good timing is needed. Puzzles start off simply – you possess a Piranha-like fish and make it cut through cables blocking your way. Possess a bigger Hammerhead-like fish, and break through an obstacle. Things get more interesting, as later on you can take control of machinery, and creatures that can teleport a short distance. Another interesting aspect is that if you possess a small fish and it gets eaten by a larger predator, your control transfers to it.

While this design has the potential to lead to some clever puzzles, most found in SILT are either very simple, or require a bit too much trial and error. The repetition is a bit frustrating because it can sometimes lead to your demise, and setting up an intricate puzzle can be undone with a single fatal mistake – as any larger fish will attack the diver and kill with a single hit. The combination of sometimes poor puzzles and imprecise controls really come to a head during the boss encounters at the end of each chapter, where you have to think quickly and also act quickly. In such cases, the frustration can become quite notable. 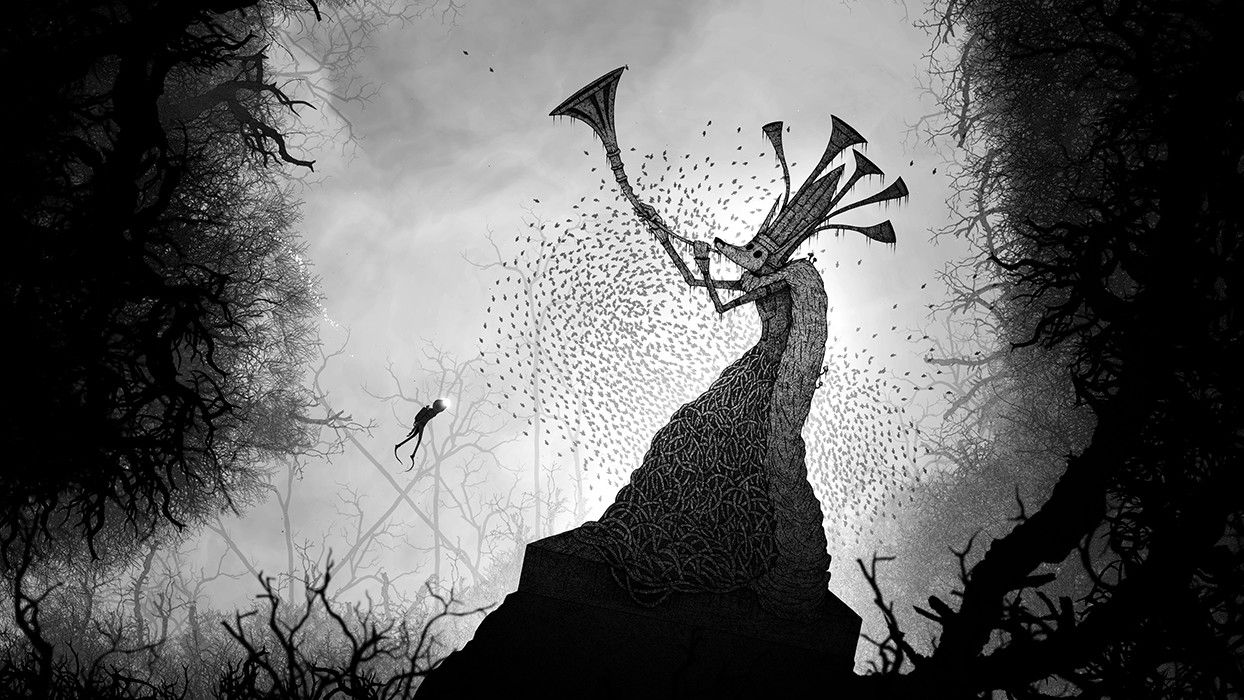 Depending on how well you do in these battles and how quickly you figure out the puzzles, SILT can last between one to two hours, which is fine value for its $15 asking price. The PC version doesn't support the mouse at all, and while it is playable with a keyboard, a gamepad is recommended for the movement. The game handles levels as a series of individual screens, with a loading pause in between, which is not as immersive as other games that can handle a continuous gameplay world. Also for a game that's entirely black and white, the only thing you can adjust is Post Exposure. It would have been good to have proper brightness and contrast settings.

Given its short length but appropriate asking price, SILT should appeal to fans of Limbo-like games. It has the surreal and haunting atmosphere, and the black and white aesthetic is well executed. Staging the game underwater provides a unique backdrop, though it also becomes a hindrance in gameplay. The controls never feel satisfying or responsive, and the puzzle design is uneven in its difficulty and complexity. Still, fans looking for a game in this particular style should be moderately satisfied.

90
No issues. Lacks mouse support and brightness settings.
Overall
67
SILT successfully conjures a dark and unnerving underwater atmosphere, and fans of similar titles should be satisfied - though it's a case of style over substance, as the gameplay largely falls flat. 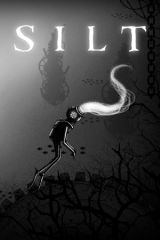