Fighting against the current

There's a certain charm about indie games. One that has resonated with me deeply since the first time I played Braid back in 2008. It's not that I hadn't played a few indie games prior to that on Xbox Live Arcade, but more that Braid was the one to open my mind to the power of excellent indie development. These small or even solo development teams set out to create something in the absence of the resources afforded by big studios, which means they have to really think outside the box when refining their concepts. Whether that's the art style, the mechanics, the gameplay, the story or all of the above. Most of the thousands of indie games developed every year never cut through the crowd, but every now and then a title will jump into the radar of general audiences boasting what looks to be an ingenious idea. 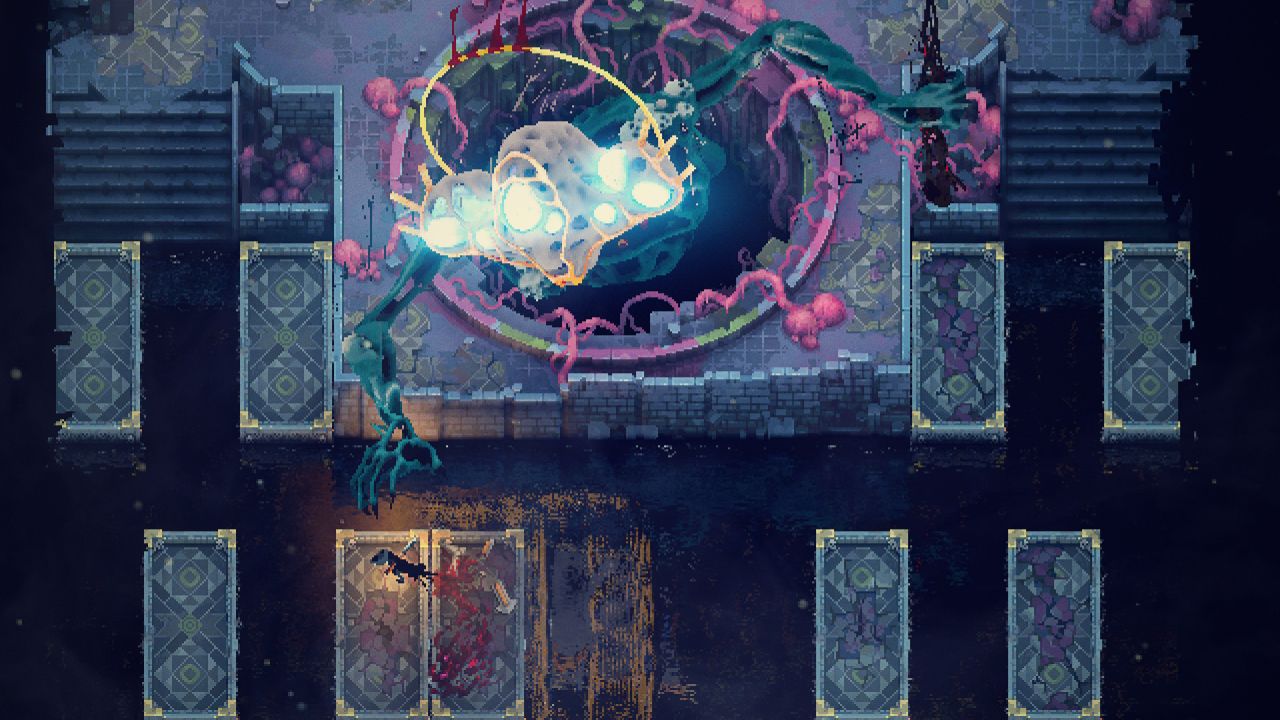 Loot River is one such game, meshing the unlikely pairing of an action rogue-like with movement mechanics akin to Tetris, plus some beautiful hand-drawn pixel art. The combat is straightforward - the front bumper will perform a light attack, the back will deal a heavy attack, you have a roll dodge, a parry, and character stats which can be upgraded. The game is procedurally generated, meaning each journey you take down Loot River will be different to the last. As we see procedurally generated levels becoming more and more popular within rogue-like experiences it's not uncommon to find games where the parameters are unrefined or too open, leaving players with an unbalanced experience. Thankfully, Straka Studio has done a good job with the procedural elements. Even after multiple runs, traversing the early game biomes still feels fresh.

Most of this is down to the clever Tetris-like mechanic. Dungeons are built on top of a river in the game, hence the game title. In order to make your way down the river, you actually have to shift the platforms on which you stand by manoeuvring the right analogue stick. This feeds into gameplay in a number of interesting ways. Firstly it allows players to take branching paths giving the player some degree of autonomy on how they tackle situations. I.e. there isn't just one single route or tactic to take in order to achieve your desired goal. Secondly, it allows you to design the way you approach enemy hoards by manoeuvring the blocks. It means you can split hoards into manageable portions or even use quick platform movements to strand them and bypass the hoard entirely. Finally, it turns the very traversal of a dungeon into a puzzle itself. Arriving at the end of an area feels like you have completed a long puzzle rather than just made it from point A to point B.

The story is a reskin of the standard roguelike experience, as you are defeated by an overpowered boss at the outset. Players are then transported to the “Sanctuary”, a space between life and death where its inhabitants are slowly losing their minds and more importantly, their humanity. You will suffer the same fate unless you can find a way to break the cycle and rid the world of the evil that condemns it. This will require you to travel down Loot River repeatedly until you find yourself back in the same situation that brought you to the sanctuary, but this time, stronger and much more prepared to rise to the challenge. The game doesn't rely much on the story. Aside from the initial set-up, players can talk to various NPCs in the sanctuary and find letters scattered across the dungeons to uncover more of the game's lore. Not unlike the games that it draws inspiration from, Loot River gives us a vague tale without much exposition. 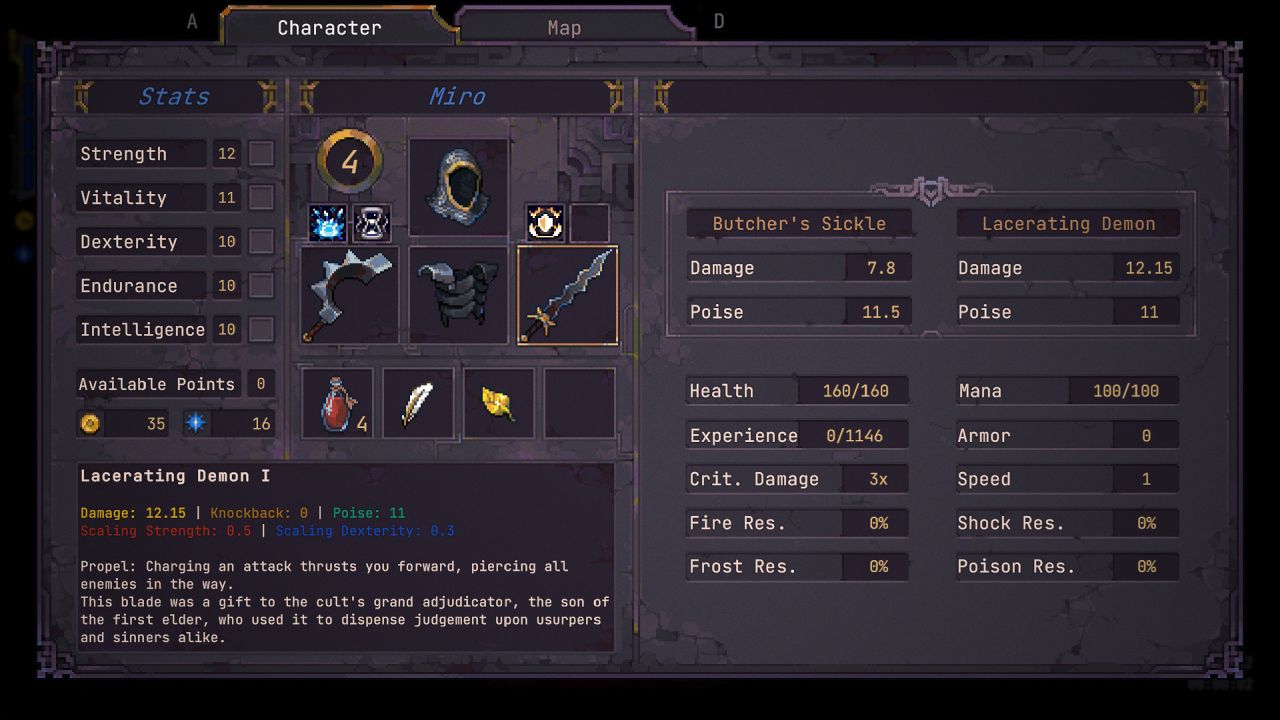 As you make your way through the labyrinths evading and fighting eldritch horrors, you will find various loot including armour, charms, weapons, modifiers and Knowledge. There are 2 clothing slots to equip armour; different armour will alter your character's stats. You also have 3 charm slots. Charms will give you additional abilities such as awarding critical damage every 5 hits or passive abilities like slightly more HP. There are over 20 different weapons to find in Loot River. From swords to axes, spears to daggers, each one has its own stats and playstyles which can be altered using charms and modifiers. Modifiers are dropped by defeating bosses and become available for use on your next run. These will alter the game in some way but often work on a risk and reward basis. For example, you may choose to use the modifier which increases the damage dealt by your weapons. Unfortunately, it will also increase the damage you receive from enemy weapons as well. Lastly, Knowledge is the in-game currency. You will collect it from fallen enemies and chests. It can be used to purchase various items at the sanctuary.

Players will also meet a number of NPCs that, once you have engaged with them, will appear in the sanctuary. Talking to them at the sanctuary will uncover more of the game's lore and most of them will offer services, usually in the form of merchants who will trade collected Knowledge for items. However, there are a couple of characters with whom the developers took a more interesting approach. Soap will offer the opportunity to hand over the potions you currently possess in exchange for double the amount, providing you make it through the next area without perishing. It allows players to be more audacious and is a refreshing addition to the game. Amongst the dark backdrop of the game, you will meet Finnegan. He is a bard to whom you can donate gold. Doing so will help him improve his songs and in return, you will receive a valuable modifier.

Unfortunately for Loot River, where the platform-moving puzzle mechanics felt tight, refined and very addictive, the combat is anything but. In principle, combat mirrors your typical Souls game by expecting the player to learn the nuances such as precision parrying, reading enemy patterns and adapting to difficult situations. However, in practice, I was left with more than a few caveats. The top-down view and pixel art style undermine the game's push towards precise combat. Simply put, it's very difficult to see what is going on. Very difficult to pick up on enemy queues or learn attack patterns, particularly when you are fighting multiple enemies at once. 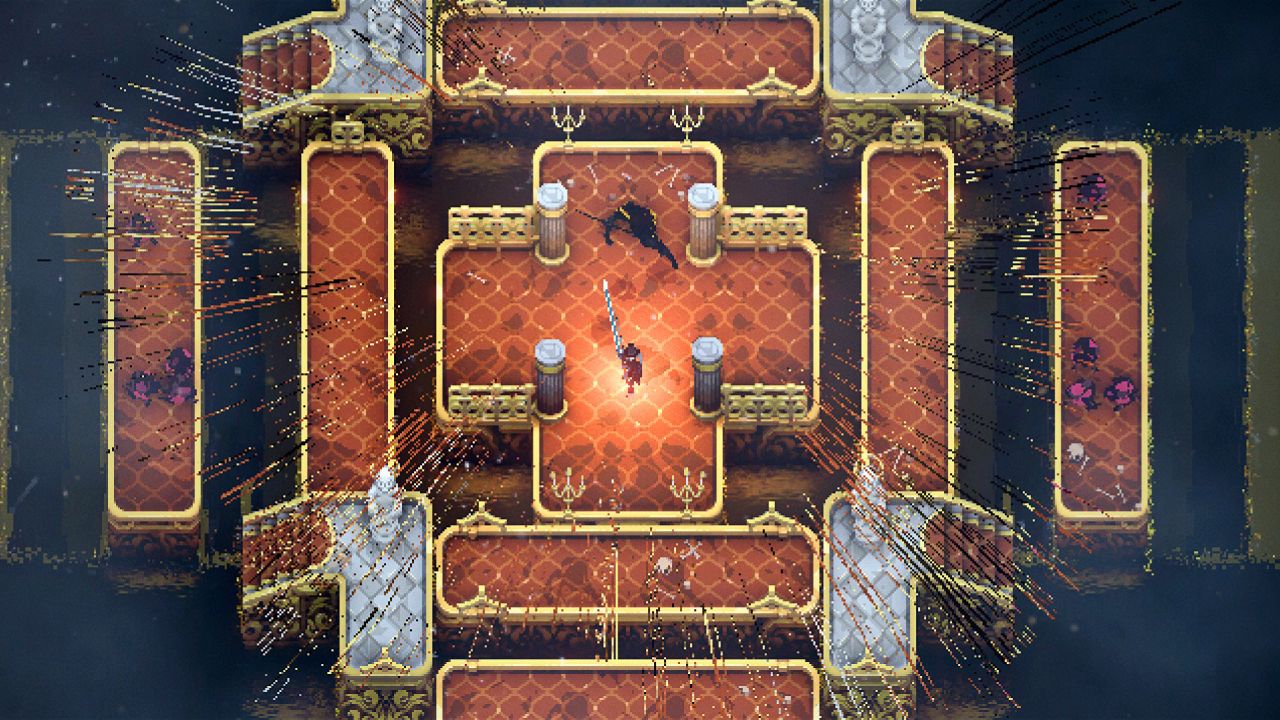 The roll dodge, intended to get you out of tight spots, feels jarring and takes some time to get used to. This is because the roll is halfway between a roll and a teleport. The character does perform a roll, but in the middle of the animation will disappear from the screen and re-appear in the direction you were pressing. It took me a while to work out why it felt uncomfortable to use but eventually I realised it was about the game's camera. The camera doesn't always centre on the character. When you use the dodge roll and your character disappears from the screen and reappears it can be hard to follow exactly where your character is.

The next problem is also movement-based. Absurdly frequently, does your character get stuck on the edges of platforms and you have to roll away to unstick yourself. Worse yet, the same thing will often happen with enemies. Your character will stick to them and you will be unable to move and sometimes it even prevents you from rolling. You are expected to edge further in your runs by mastering the mechanics of the game, yet so many times did I find myself perishing and having to restart runs because my character would stick to enemies or invisible collision detection.

To top this off the hitboxes are what can only be described as broken. Let's say I manage to evade an enemy without my character getting stuck to them. Let's say I have finally gotten used to the dodge/teleport roll. I manage to use this to teleport through an enemy as they are attacking, putting me behind the enemy and out of reach of their blade. The animation plays out and the enemy weapon comes nowhere near my character. Yet way too frequently, my character will still take damage as if I were still standing in harm's way. It is infuriating and failing a run in this manner quickly diminishes any desire to try again.

More fundamentally at fault are the number of gameplay elements that stifle one another and obscure the game's true intentions. The choice to create a rogue-like gives the impression that this was intended to be an arcade action game. The clever and unique Tetris-like platform manoeuvring also leans into this assumption. Yet the attribute levelling and character build systems play as if they belong in a long drawn out RPG. It is easily compared to the Fromsoft model used in the popular Souls games. Spending experience points accrued will allow players to increase attributes to reflect the type of character they want to play as. Weapon and armour choices scale with certain attributes increasing their effectiveness. These types of levelling systems are incredibly nuanced and require hours of dedication to master. At odds with this is Loot River's rogue-like mechanics meaning every time you start a new run you start a new build. Your attributes will be reset, your armour and charms will be lost and because of the randomized looting system, there are no guarantees which weapon type you will find and each one plays exceptionally different from the one before it. The game expects you to master its combat and learn its systems yet strips everything you have learnt away from you every time you die. 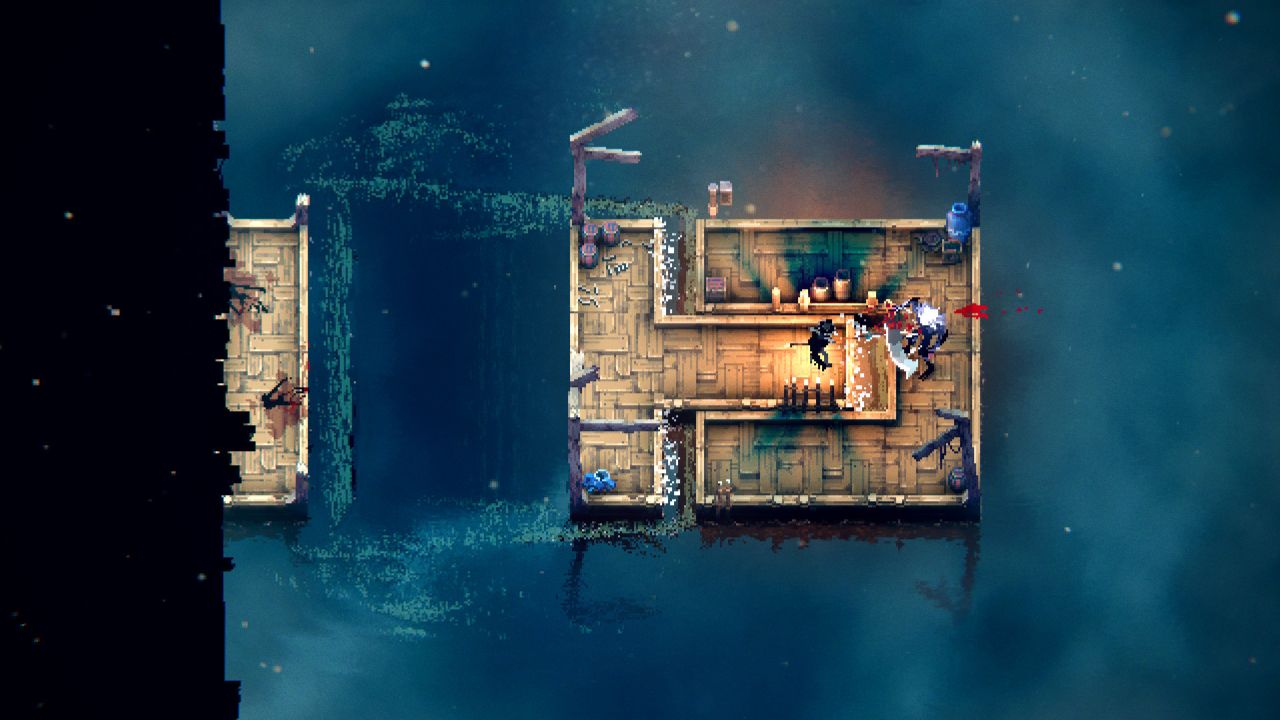 That being said, the one time that Loot River's combat system does seem fitting is in the boss battles. The combat lends itself nicely to the scenarios the bosses throw at you and this is the only time where combat and platform movement blend reasonably seamlessly. Unfortunately again though, this is overshadowed by wonky hitboxes and funky character glitches.

Taking into account Loot River's flaws, it is difficult to recommend in its current shape. The platform movement and puzzling mechanics are incredibly satisfying and could have been the star of the show had it not been for the problems with combat and levelling systems and the general lack of polish.

Our ratings for Loot River on PC out of 100 (Ratings FAQ)
Presentation
60
Art style and graphics are charming to look at but can hinder combat precision. Animations can appear jarring and look wonky.
Gameplay
55
The Tetris-like puzzle elements are addictive and rewarding. The procedural generation is well designed keeping the game feeling fresh even after multiple runs. The combat however lets the game down with an ill-fitting system and some poor design choices.
Single Player
60
Loot River lacks much of a story after the initial setup. There are a few charming moments to be had with the game's NPCs. Moments of reward are few and far between against the difficulty of the game. Bosses are a highlight but are still hindered by technical issues.
Multiplayer
NR
None
Performance
(Show PC Specs)
CPU: AMD Ryzen 5 3600X
GPU: GTX 1080
RAM: 16GB DDR4
OS: Windows 10 Home

50
Frame rates are generally consistent, but the game suffers from multiple technical issues and glitches, and feels unfinished at times.
Overall
56
For all the promise that Loot River held with its amalgamation of gameplay features, they, unfortunately, don't gel together well. This is compounded by the technical issues making for an experience that is more frustrating than it is fun. 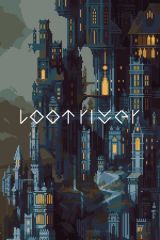