After finishing a busy day, I often reflect on critical moments that have passed and ask myself, was every right decision made? These type of questions is why I have always found philosophy incredibly fascinating, and this passion even led to me majoring in the subject area for my degree. If ethics has ever piqued your interest, then the Trolley Problem, Inc developed by Samuel Read-Graves, may propose an interesting premise, as this simulator game plays out a series of thought-provoking questions and dilemmas based on authentic philosophy papers. 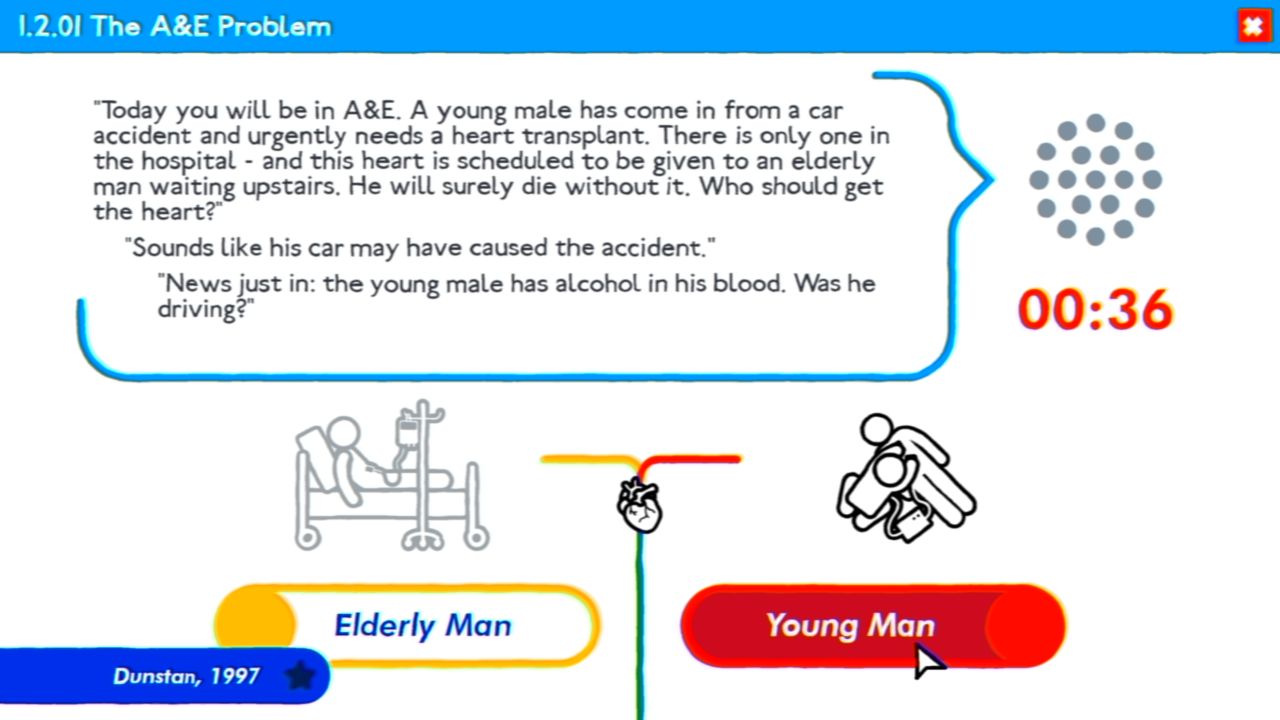 The Trolley Problem is perhaps one of the most notable thought experiments in modern history put forward by the English philosopher Philippa Foot. The experiment introduces a runaway trolley that is on course to collide and kill five people on a train track. However, a bystander can decide to intervene and change the route of the runaway vehicle by pulling a lever, but if they choose to do so, it will change course to another train track which will kill one person.

This hypothesis has sparked a significant debate on what is the ethical choice in that scenario. Are you morally obliged to minimise the number of deaths? Is the bystander any more or less implemented by not pulling the lever? Does the bystander have the authority to decide who lives and dies? These fundamental questions are the whole foundation of the Trolley Problem, Inc.

The story follows a new employee on their first week of training at a company. During your shift, you will be presented with a situation and two possible choices, and this will be displayed on a makeshift ballot box sheet as you click on your desired answer. When a question appears, you will have forty seconds to respond - but these won't be any old questions; the dilemmas will make you feel uncomfortable to the core, and if you were to encounter these predicaments in real life, you would surely need a stiff glass of whiskey or perhaps two. 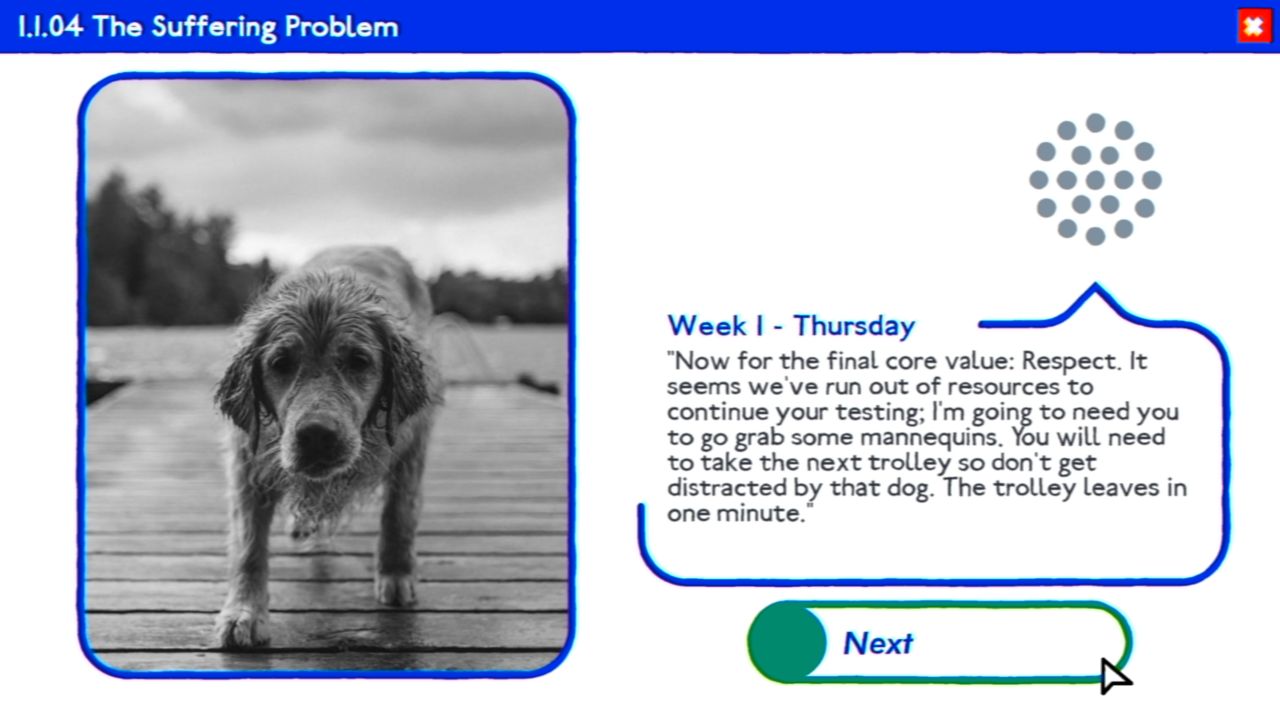 Some moral dilemmas may be easier to answer than others, as you will have a gut instinct of what action you will want to take. For instance, in the classic Trolley Problem, I adopted a Utilitarianism approach of picking the route that saves the most number of people, and without much hesitation, I selected the option that saves five people but kills one person. But, in other scenarios, I found it much trickier to answer the questions. Are you justified in invading someone's privacy to prove a crime has happened? If an elderly gentleman is scheduled for a heart operation, but a young man now needs a new heart because of a car accident, which should you prioritise? Answering these types of questions didn't sit as well with me, and with the timer ticking away, it wouldn't leave much wiggle room for a long moral debate.

A cynical female narrator recites every scenario, and she will belittle every choice you make, regardless of your reply. This ongoing commentary adds a level of dark humour to every situation. The narrator even goes as far as referencing your previous responses and making comparisons on whether those two answers marry up with one another. It's a great technique to get you thinking about why you originally answered a question a certain way, as ethics has a habit of being inconsistent; we are human, after all.

The end of every scenario will transition to a black screen where a mock-up receipt will emerge with a long list of horrible outcomes from your decisions, including failed projects, jobs lost and the number of people you have killed. There's something rather macabre about seeing a long catalogue of tragic consequences, but it was an effective method of keeping track of your progress and seeing how many people you have harmed and affected throughout your journey. 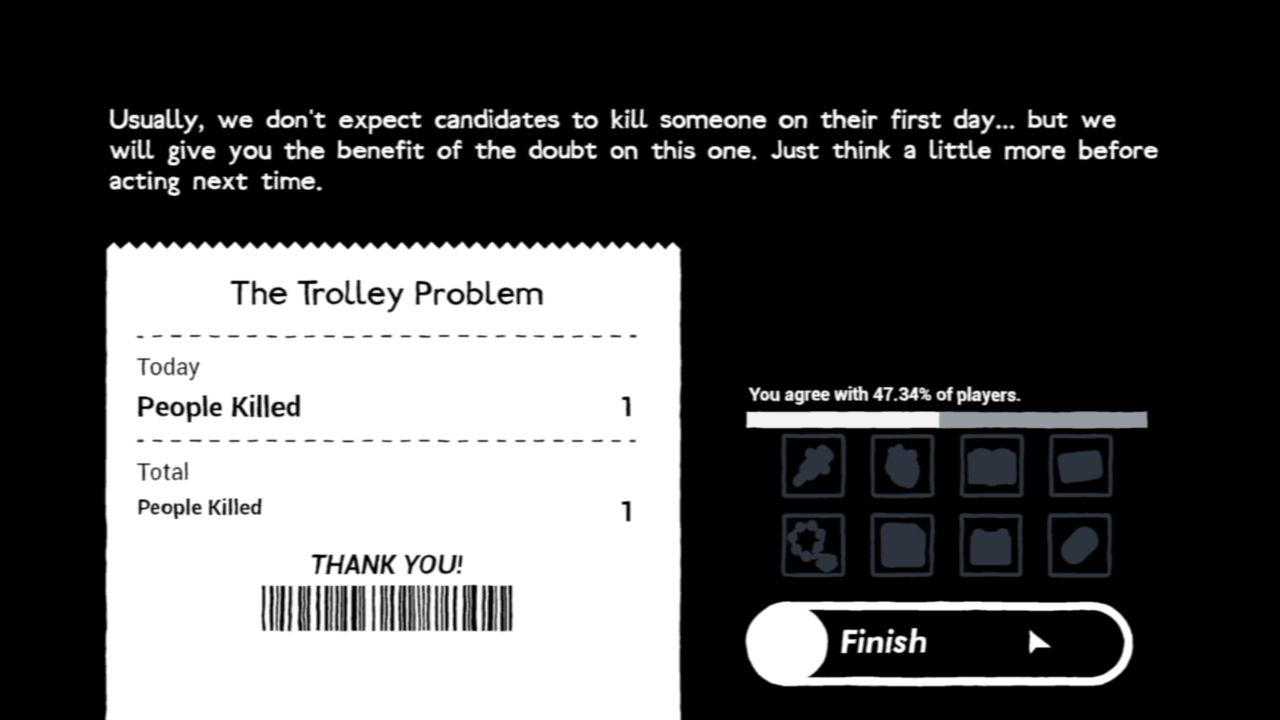 One obstacle in the decision-making process is that sometimes, not all the details would be put forward, and crucial pieces of information will sometimes be left out or merely speculated on, which can throw a spanner in the works. One that particularly stood out was a situation in which two people are in a self-driving car heading towards a tunnel, but a helpless child has tripped on the road and is now directly blocking the tunnel's path. Should you allow the vehicle to keep going and kill a vulnerable child or swerve into a wall, killing both passengers? I decided to save the child, but afterwards, the narrator deliberated how we may truly know if the computer is sophisticated enough to acknowledge if something is human? This left me feeling completely hoodwinked, as I may have needlessly killed two people.

The first scenario presented is the aforementioned trolley problem, with rehashes of the experiment from different perspectives, but later escalates into other moral dilemmas such as murder, vaccinations and abortions. Subject topics in these areas are often explored in philosophy, so I appreciated that the game didn't shy away from these mature themes. Having said this, the way they propose some of the situations in the campaign's later segments seemed very forced. You will be given job promotions to various organisations, and they will use this narrative tool to introduce new concepts to the story, but more often or not, it feels like a way of throwing you into extreme scenarios. Going from a train operator to working at a health organisation to being enlisted as an assassin didn't feel like a natural employment progression. Although to be fair, I wouldn't know the standard employment path to being an assassin.

Not only that, but some of the decisions made throughout the game didn't feel as impactful as I would have liked them to have been. One example is when you stumble across a dying dog on a train track that roughly has twenty-four hours to live. Do you choose to leave the dog in agonising pain or end its suffering by killing it? This question is a good way to get you thinking about euthanasia, but when it comes to gameplay, it makes the action you pick feel somewhat redundant, as no matter what you decide, the dog is destined to die. 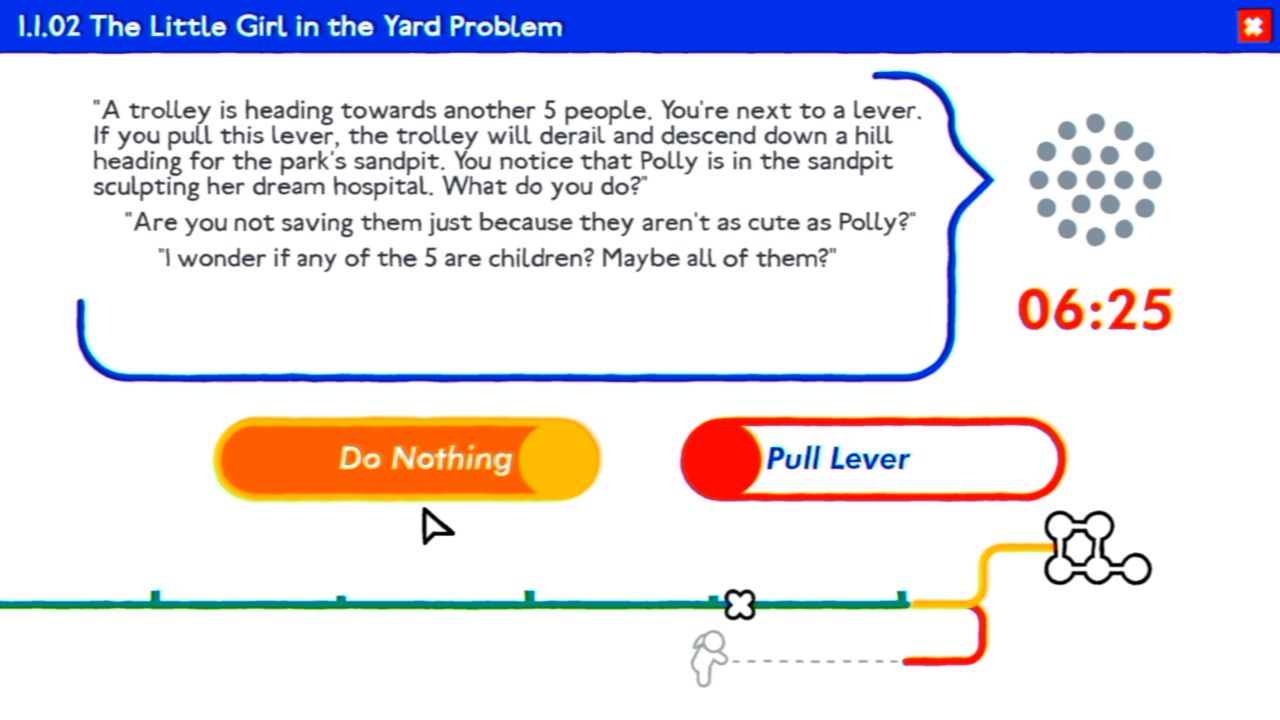 Visually, the game eschews what you may be used to in favour of a more minimalistic look. The whole experience essentially plays out on an internet explorer page, as a pure white coloured background is covered across the screen, accompanied by text writing. It even has a blue menu bar, with the iconic red cross in the top-right hand corner of the screen. Although this was clearly a stylised choice to make it simple so you could concentrate on the questions at hand, I couldn't help but think they could have done a bit more to make the game look aesthetically pleasing.

There were no performance issues from a technical standpoint, which isn't too surprising as the game overall has a conservative look and is relatively a brief experience, lasting approximately two hours. You can play in a co-op mode where both players take turns answering different questions, which I would imagine could be a fun way of having debates with friends on what is the morally right thing to do. There is also a Twitch integration feature, where the audience watching your stream can pick the response to your questions.

You won't feel good about yourself after playing the Trolley Problem, Inc, and that's the whole purpose of the game, as it continuously wants to challenge you on your ideological principles. However, with the game providing more information than meaningful gameplay, it's almost best described as an educational experience than a simulator game. As someone who has studied the discipline before, I thoroughly enjoyed reacquainting myself with these notions, and if you are someone curious about issues surrounding ethics, society, and justice, then you might find something here. But sadly, if you are not of the latter, there could be a limit to how rewarding you'll find the experience.

Our ratings for Trolley Problem, Inc on PC out of 100 (Ratings FAQ)
Presentation
65
The stylistic overlay is minimalistic, yet the unassuming visuals hide its complex and sophisticated themes.
Gameplay
65
Even to simulator game standards, there isn't much to the gameplay as you are only required to tick a box to a conundrum before the timer runs out. Although, for the most part, the thought experiments presented to you are superb and thought-provoking.
Single Player
55
The game starts strong with the titular Trolley Problem experiment, but it struggles to hold a meaningful narrative as to why you're put into some of these extreme scenarios, which leads to some of the situations you come across feeling forced.
Multiplayer
NR
Co-op play is available along with a Twitch integration feature.
Performance
(Show PC Specs)
CPU: Intel Core i7-10750H
GPU: RTX 2060
RAM: 16GB DDR4
OS: Windows 10

90
No real performance issues were observed.
Overall
65
Trolley Problem, Inc will continuously confront your morality with a series of ethically probing questions and uncomfortable answers. The dark narrated humour compliments the experience with satirical anecdotes. This might be an insightful endeavour if you're curious about ethics, but its arbitrary minimalist structure and brief length amount to a forgettable experience.