Kirby and the Forgotten Land Review

A solid first 3D adventure for the pink hero

Considering how old the character is at this point, it's wild that it has taken until 2022 for Kirby to make the full jump to 3D. Mainline entries have advanced to 2.5D in the past, specifically with Kirby 64 and Kirby Star Allies, but it refused to join fellow Nintendo titles in going three dimensional. That has finally changed, though, with the arrival of Kirby and the Forgotten Land. The jump to 3D can be tricky, so developer HAL Laboratory had their work cut out for them. 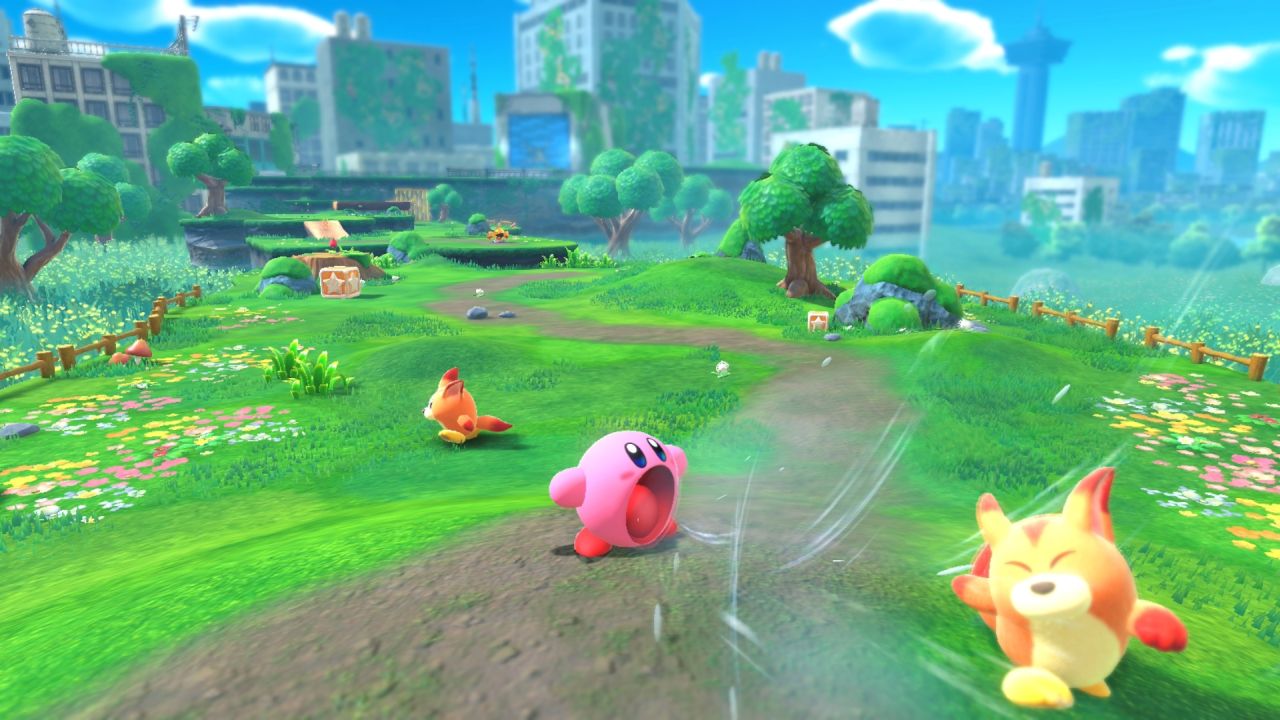 As to be expected from a Nintendo platformer, there's not much of a plot. Kirby and the inhabitants of Dream Land are sucked up into a mysterious vortex that appears one day. This portal spits them out into the land known as the New World, a quasi-post-apocalyptic wasteland. After saving a mysterious creature named Elfilin, Kirby finds out that the Waddle Dees are being captured by the natives of the New World. Ultimately it becomes Kirby and Elfilin's responsibility to save the Waddle Dees and make it back to their home world.

For almost the entirety of the main campaign, the plot takes a backseat to the gameplay. You get little information as to why any of the events leading up to the start took place. After completing what seems like the final boss battle, then you begin to discover what happened, and I was not expecting it to say the least. Even for a franchise as weird as Kirby, it's one of the more out-of-left-field plot movements I have seen in recent years. I'm not sure if I would even call it good, but I can say that it kept me entertained during the final batch of cutscenes if nothing else.

The goal of each level is to rescue captured Waddle Dees. You typically save three by completing the level, but there are a handful hidden in each one as well. These can be found through discovering hidden paths, or by destroying certain items throughout. During my first run in each level, I typically found around 90% of the hidden Waddle Dees. Thankfully, if you don't discover all of them, the post-level breakdown will give you a hint as to where you can find the others. 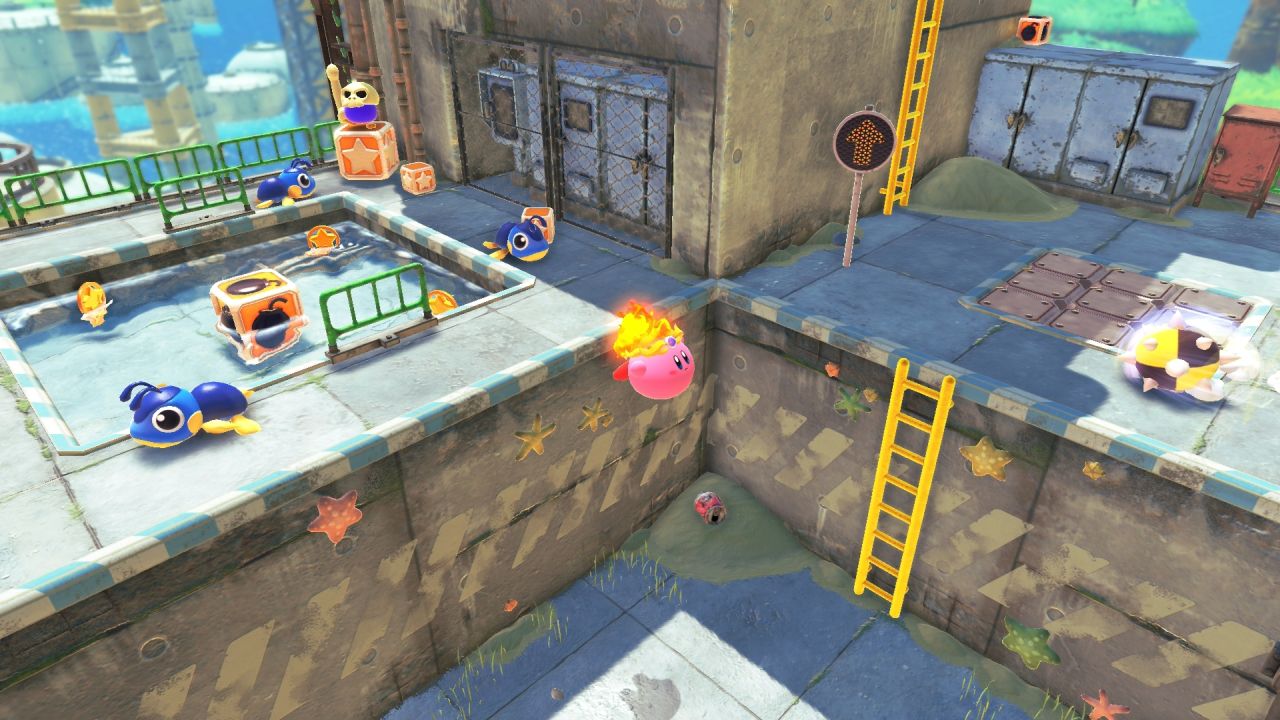 Overall, I would say the gameplay is good for what it is trying to do. It's a basic platformer that uses the skillset Kirby possesses in fun and unique ways. However, in comparison to what we typically get from Nintendo franchises, the action feels a little humdrum. The level design lacks the pizazz that recent Mario titles have excelled at, and the movement of Kirby can feel a little stiff and slow at parts. For the levels, exploration is much more important than speed, so this isn't much of an issue. But when it comes to the boss battles, where latter encounters require you to be quick on your toes, it's a bit of a problem. It's not enough to make the game too much of a challenge, but it led to some annoying moments.

Even with the move to 3D, the formula for Kirby hasn't been altered too much. The Pink Puff can suck up enemies they come across to either spit them back out or steal their powers. The abilities found in this adventure include the classics such as fire and ice, but also new skills like being able to drill underground. Additionally, all the powers in the game can be upgraded by finding blueprints hidden throughout the adventure. These upgrades provide seismic improvements to each ability, so it's well worth your time to find these buried treasures. Kirby’s duplication abilities are what makes the Forgotten Land stand out from other 3D platformers, though, outside of that gimmick, it doesn’t do much to differentiate itself from the pack.

Perhaps the most ballyhooed addition to the Kirby formula for this sequel also involves sucking things up. Upon its unveiling, Mouthful Mode instantly became a viral sensation. Instead of smaller items, Kirby now possesses the ability to vacuum up larger, more oblong shaped items. In turn, these items grant some other unique powers to play with. Having a car in its mouth lets Kirby drive it, while ingesting a vending machine lets it shoot cans. The science behind how these work is shaky, but they do add some fun variety to the preceding. You move differently in Mouthful Mode, and the challenges are creative and enjoyable. 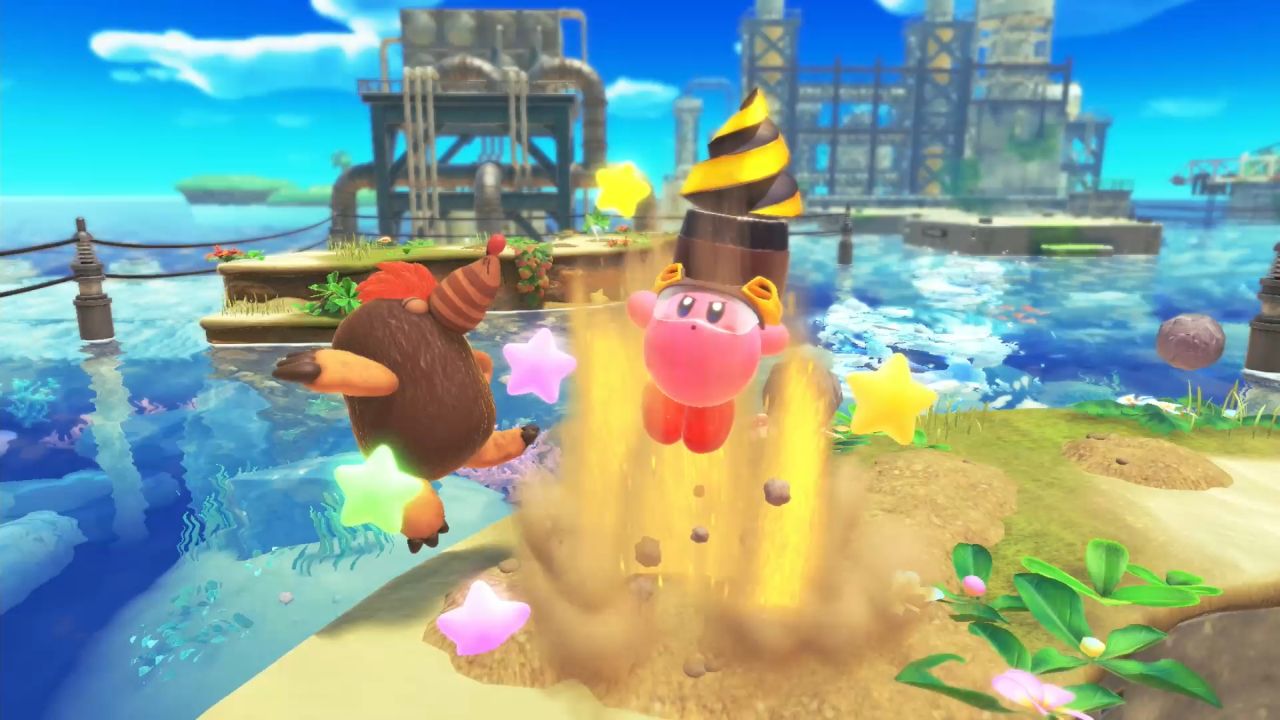 The moments where Kirby truly shines are found in the bonus Treasure Road challenge levels. These special levels have you using one of the many abilities Kirby can possess in order to clear it in under a specific time limit. They are short enough where you can sit and run through them all in a single sitting if you would like. And while they aren't too challenging to complete, finishing them under the target time is tough. They require you to use the abilities in ways you might not have realized you could previously, such as when using Buzz-Saw Cutter to ricochet off walls to trigger a series of switches. Completing them regardless of hitting that mark will give you stars, which can then be used in combination with blueprints to upgrade Kirby's abilities.

The blacksmith Waddle Dee that spices up your arsenal is one store that opens as you play through the campaign. The Waddle Dees you rescue are returned to Waddle Dee Town. The more you recover, the more of the town that becomes available. Unlockable locations include item shops that let you carry a bonus with you into a level, a coliseum where you can compete against previously defeated bosses and even a little hut for Kirby to get some sleep in. While some of the stores you unlock are superfluous, I do like how there's a tangible reward to finding every Waddle Dee. You aren't just saving them to fill up an on-screen meter. You're doing it in order to unlock more to do, and you get to see that happen as you collect them.

If you find yourself looking for help, a friend can join up for the entirety of the adventure. Player one will still get to control Kirby, and the second player will have Bandana Waddle Dee to use. Bandana Waddle Dee cannot duplicate powers like his ally, of course, but he does have a nice spear to use. Ultimately, though, the mode feels like an option for a younger sibling or someone not adept at the medium. Kirby is still the star of the show, and between the abilities only they can use and the fact that the camera tends to remain focused on them, it feels like the second player is just tagging along at times. 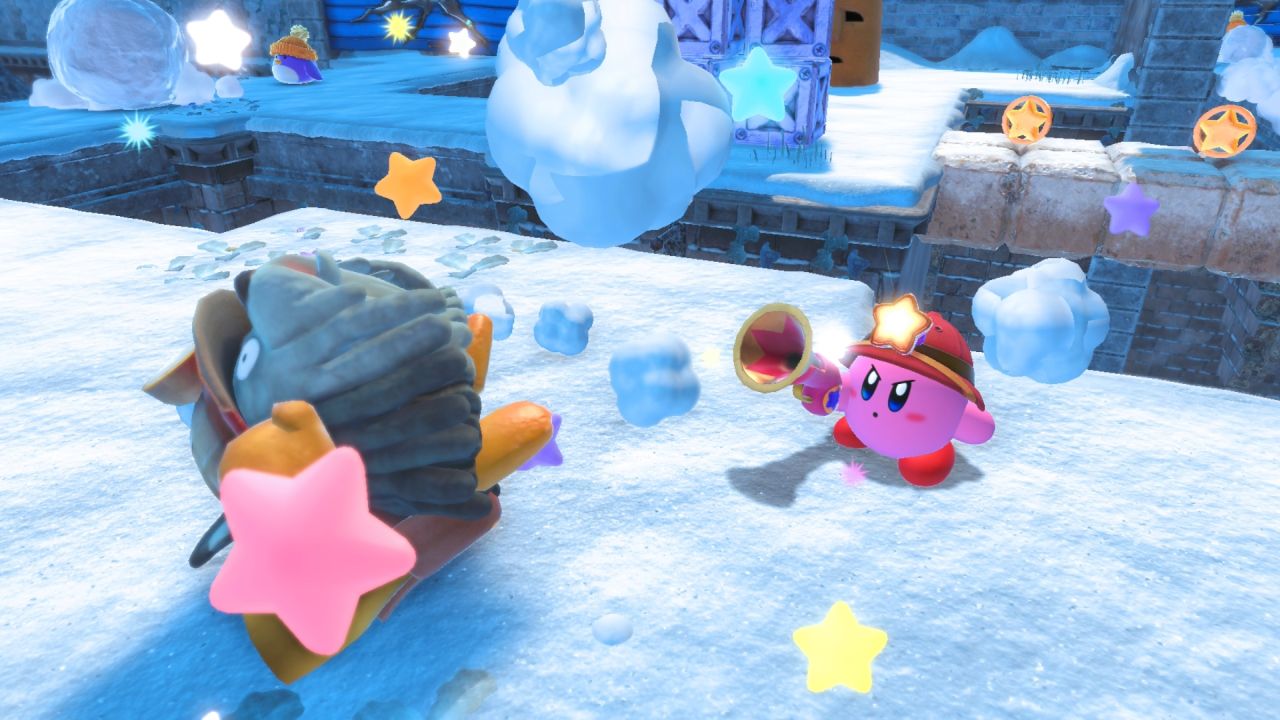 The limited power of the Nintendo Switch hampers it, but Kirby and the Forgotten Land does have a pleasant visual style. The costume changes Kirby goes through are delightfully designed, and I enjoyed seeing how their style evolved upon being upgraded. The major bosses you go up against have great designs as well. The levels themselves aren't the most creative, but they do tend to be super colorful, which I appreciate. The splashy colors stood out both on the Switch's smaller screen, as well as an HD TV. However, there aren't a ton of different enemy types found in the levels. You tend to see the same handful pop up repeatedly, as well as the same few mini bosses. The repetition of the mini bosses feels especially lazy.

Kirby and the Forgotten Land is a solid 3D platformer that nails what it was trying to do. It manages to incorporate the unique skill set of its titular character into an adventure that doesn't overstay its welcome. The breezy difficulty also makes it accessible to the younger fans of the franchise. However, the game does lag behind the truly greats of the genre. The level design could have used some additional work, the co-op feels tacked on and the somewhat sluggish movement is a bother. As a first dive into the 3D platforming pool, this is still a success, but if Kirby is planning on sticking around, hopefully the next effort is a little more inspired.

Our ratings for Kirby and the Forgotten Land on Switch out of 100 (Ratings FAQ)
Presentation
76
Although hamstrung by the console's tech, Kirby and the Forgotten Land has a charming visual style. Colorful even in the face of the apocalypse, the title looks good on both large and small screens.
Gameplay
74
HAL Laboratory did an excellent job of incorporating Kirby's unique skills to the world of 3D platforming. The handful of abilities you can wield makes for a creative adventure. Kirby tends to move a little too slowly, though, and more enemy variety would have been welcomed.
Single Player
65
Up until just about the very end, the plot is a total non-factor. However, there's still a good amount of content here to keep you busy. The level design is sometimes uninspired, and boss repetition is not great.
Multiplayer
60
I appreciate the option being included, and I do think there's enjoyment to be had with a younger gamer. The mode still feels tacked-on, though. And playing as Bandana Waddle Dee just isn't as fun as using Kirby.
Performance
80
Some light slowdown during more intense moments of action, but performance was pretty solid otherwise. No major issues to report playing docked or handheld.
Overall
75
Kirby and the Forgotten Land might not redefine the genre, but it's still a solid 3D platformer with a great gimmick. Kirby's duplication ability makes for some great gameplay and the much-anticipated Mouthful Mode doesn't disappoint. It's still lacking in some areas, but there's plenty of enjoyment to be had.

Kirby and the Forgotten Land

Kirby and the Forgotten Land
12 images added 241 days ago

Kirby and the Forgotten Land - Gamepl...
Posted: 326 days ago

Kirby and the Forgotten Land - Mouthf...
Posted: 299 days ago

All videos for Kirby and the Forgotten Land (3)
Advertisement ▼