Ghost on the Shore Review

Walking simulators have not changed much over the years. There is only so much you can do with a genre that lacks much, if any, gameplay. Most "narrative exploration games" involve the sequential investigation of a place, by reading notes and/or listening to audio, to tell a story with twists and emotional hooks. Ghost on the Shore is a first-person walking simulator that does not change this formula much. Its only notable difference is that you explore with a ghost inside your head that talks to you. And while these ghostly interactions are fine, and the story is adequate once put together, there is not enough in Ghost on the Shore that brings excitement. 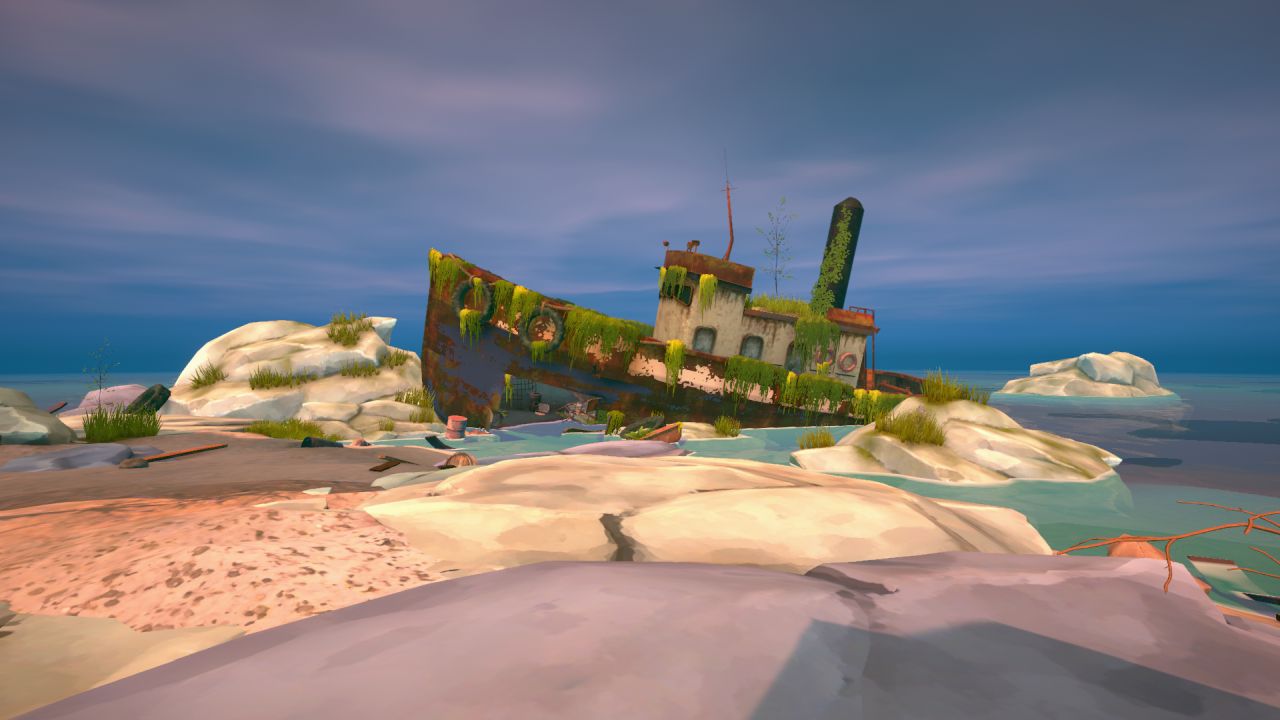 You play as Riley, a woman who is navigating a small boat at sea by herself. She gets caught in a storm and is forced to land at a group of islands known as The Rogues. These islands were inhabited by various human settlers over the last few hundred years, but now there is nobody around. Well that’s not quite true; there is that strange ghost inside your head. The ghost, named Josh, has a sorry case of amnesia. He does not remember much, although it’s clear he is connected to the islands. Riley sets off to explore and try to find who Josh is, what is keeping him here, and how he fits into the story of the islands.

Josh remembers bits and pieces as Riley explores dilapidated buildings and coastal bluffs. His insights are often vague, in order to prolong the mystery. As he chats away, you can react differently to his words of wisdom. With multiple dialogue choices, and only one answer given by Josh, it could take several playthroughs to understand all the secrets. He will also act differently in general conversation. Being nice to him makes him friendly enough to encourage you to climb through a window. A hostile Josh might act flippant or question Riley’s true reason for setting out on her own. Riley’s dialogue also changes tone, so it is nice that the ghost is not just the equivalent of a narrator.

But Josh is not the only ghost on this lost and lonely shore. Another ethereal being floats around the islands and cannot seem to leave. This roaming ghost will talk to Riley infrequently, and warn her that Josh is not to be trusted. The other ‘ghosts’ you see are merely echoes of the past, another trick used often by walking simulators to tell their story. These echoes appear at set points in special visions that hide the surrounding landscape. Strangely, the visions come with a deep reverberation sound like a horror game, but the visions are never scary or unsettling. With all these ghostly pieces on display, you must try to make sense of it all. 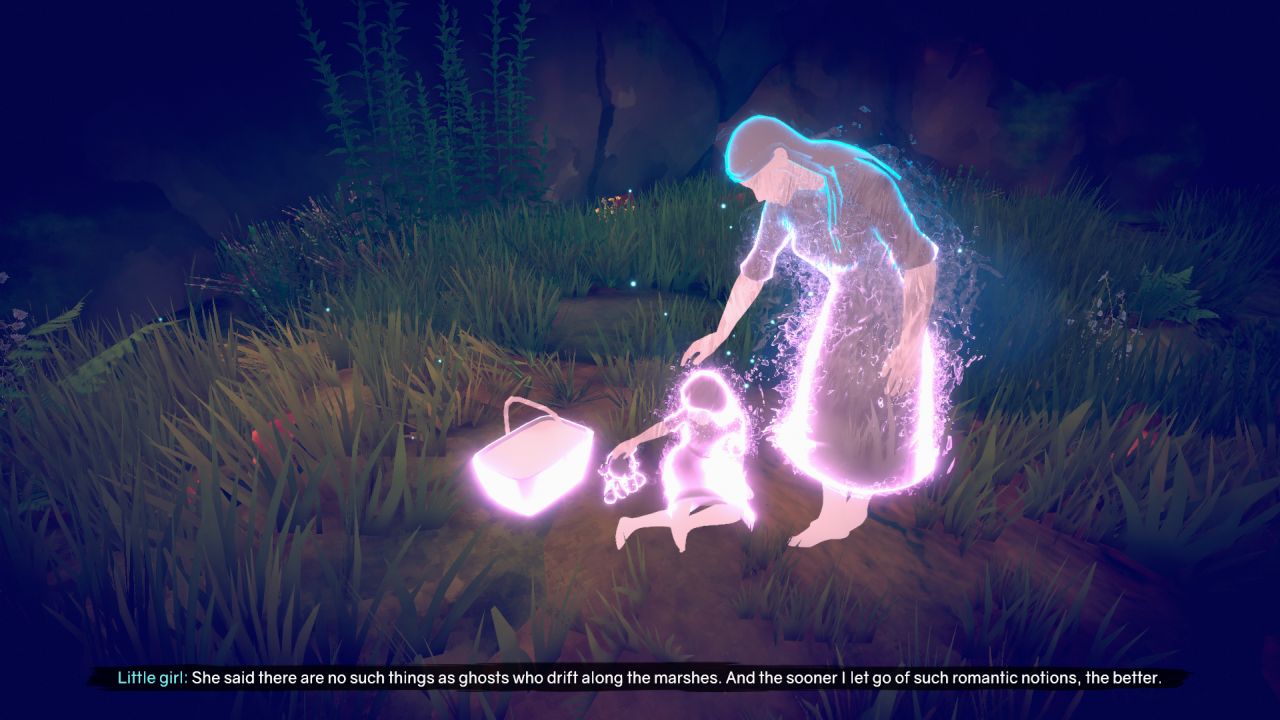 There is another story layer that is told via more conventional methods. Two characters had lonely adventures on the islands, after most others had vanished. They left behind letters and audio tapes that explain what they were doing by themselves. This connects more to Riley’s side of the story, but both also crossed paths with Josh and had different outcomes. Unfortunately the tapes and letters are hidden in obscure places, which is annoying considering they are generally interesting. There is no indication of where they might be found, even after the game is completed.

The story can be hard to follow. There are multiple time periods and a few of the characters appear across more than one. It is easy to assume side characters are more important than they are when information about relationships or personalities appears to be hidden (it’s actually just absent). Characters might be mentioned in a journal or newspaper and never talked about again. The main cast is properly connected at the end, but those on the periphery are just too weakly defined and serve as a distraction. 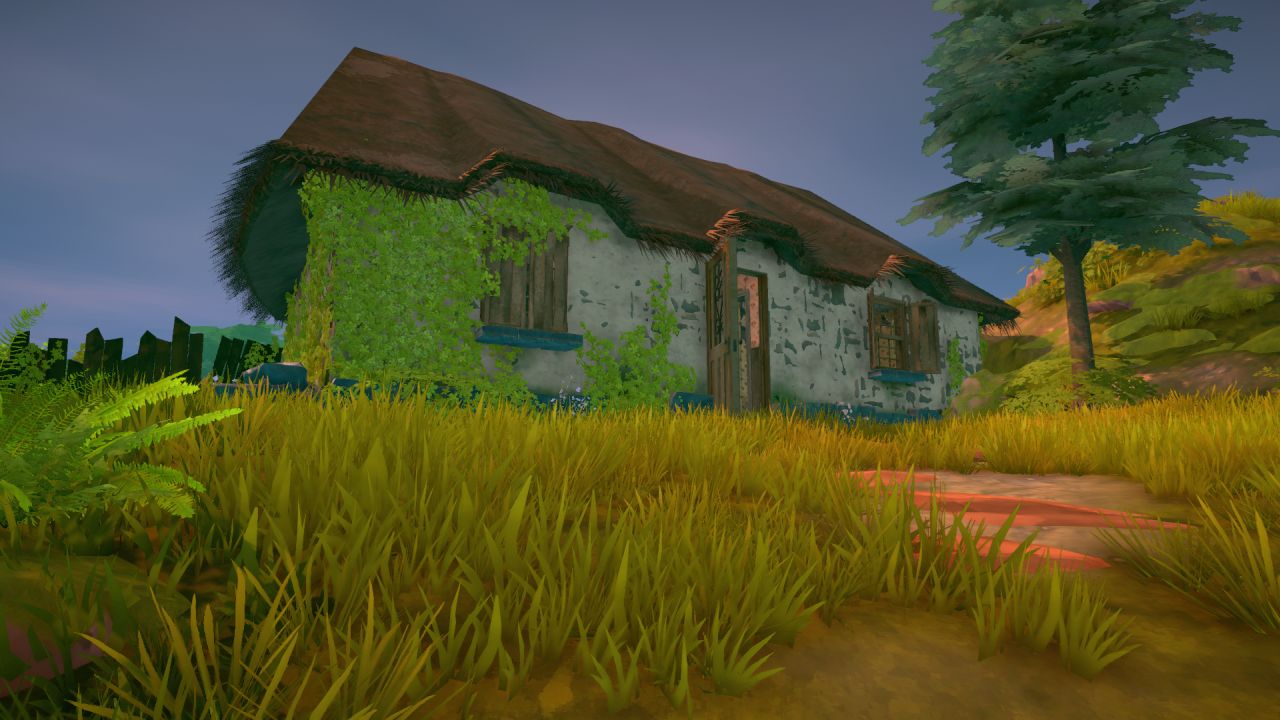 The game ticks a lot of checkboxes in the walking simulator genre. There is a mystery to uncover and a reasonable desire to find answers. The emotional connection between characters is the main driving force, and it works okay but stops short of being poignant. There are even a few alternate endings, although how they are achieved is unclear. There is no chapter select, so you have to replay the entire game to get the different endings, just like in Paradise Lost. A full playthrough of the game will take 3-4 hours, or you can rush through in about an hour.

Ghost on the Shore is not a good looking game. Although an indie title at a lower price point, the visuals are dated with muddy textures, primitive geometry, ugly trees, and bland interiors. It stylizes the world with more saturated colors, so it’s not exactly going for realism. Even still it does not have visually interesting locations or appealing art design. Repeating textures and poor draw distances are a constant visual nuisance. Notes and items look fine when inspected and rotated, and Riley’s journal has terrific illustrations, but the rest of the game lacks good visual presentation. The audio work is better, with decent voice work from the cast and good performances by Riley and Josh as they feed off each other. 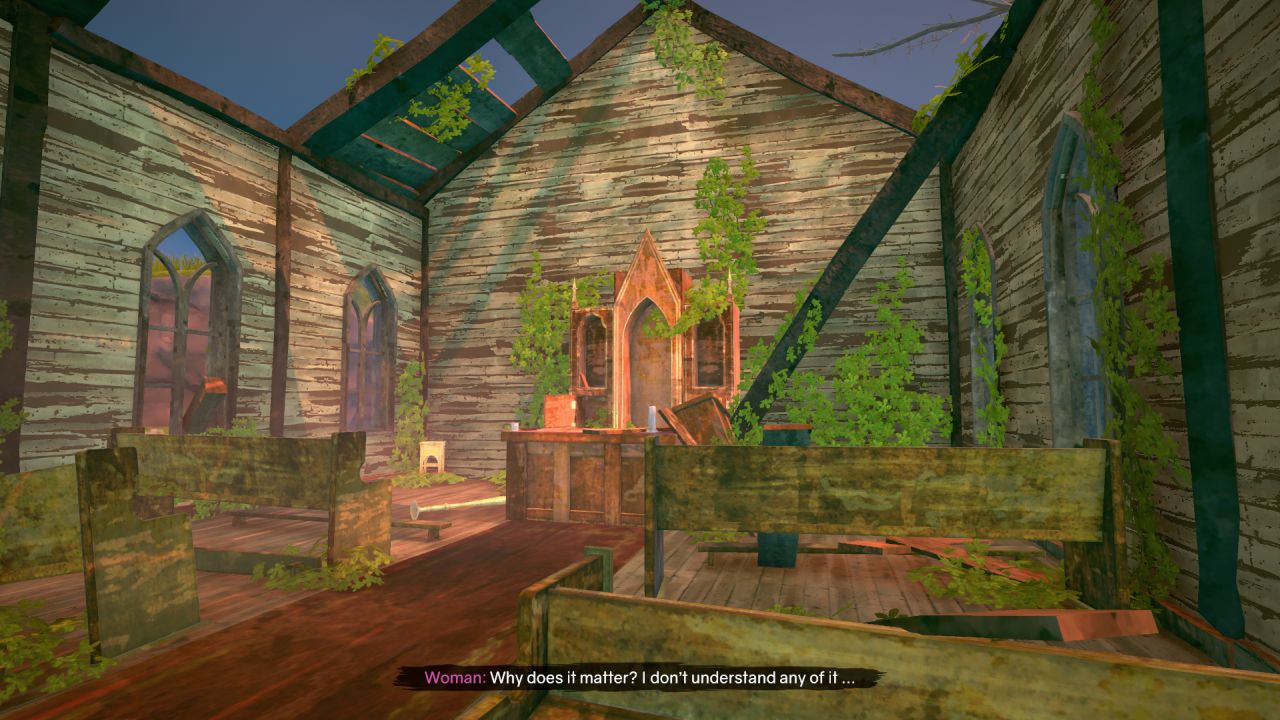 If fate washes Ghost on the Shore to your door, then it might be worth playing with low expectations. The mystery within the story is fine and most interactions with the ghost (in your head) are also reasonably well done. But the narrative is a bit vague, with side characters in limbo and facts obscured to prolong the mystery. The visuals are below average, providing nothing to make the exploration worthwhile on its own. And since it lacks anything to get excited about, Ghost on the Shore is a walking simulator that will likely be forgotten.

Our ratings for Ghost on the Shore on PC out of 100 (Ratings FAQ)
Presentation
50
It has basic visuals with poor geometry and muddy textures. Voice work is decent.
Gameplay
40
As a walking simulator, it only has basic exploration and a few items to inspect. Dialogue choices with the ghost make up the most substantial gameplay component.
Single Player
60
The mystery of the islands is interesting enough with your ghostly companion playing a central role. Poorly defined side characters and vague delivery hurt the narrative.
Multiplayer
NR
N/A
Performance
(Show PC Specs)
CPU: AMD Ryzen 5 3600
GPU: XFX RX 480 GTR Black 8GB
RAM: 16GB DDR4
OS: Windows 10 Pro 64-bit

75
Generally runs fine but it has a few frame skips and stutters.
Overall
56
Ghost on the Shore is a bland walking simulator that has decent conversations with a ghostly companion. Its vague narrative, unexciting visuals, and typical formula make for a forgettable trip.

Ghost on the Shore 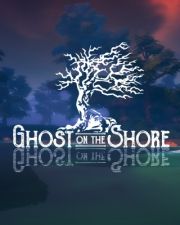 Ghost on the Shore
10 images added 104 days ago