Stylish skating that gets stale

While I’ve yet to play Heart Machine’s debut title Hyper Light Drifter, it’s a game that has long sat in my backlog as a must-play, with its vibrant neon pixel-art aesthetic and apparent heavy inspiration from The Legend of Zelda: A Link to the Past. Their sophomore release Solar Ash caught my eye with its similar neon look, fast-paced traversal and intriguing mish-mash of games such as Shadow of the Colossus, and The Pathless (one of my favourite games of 2020). 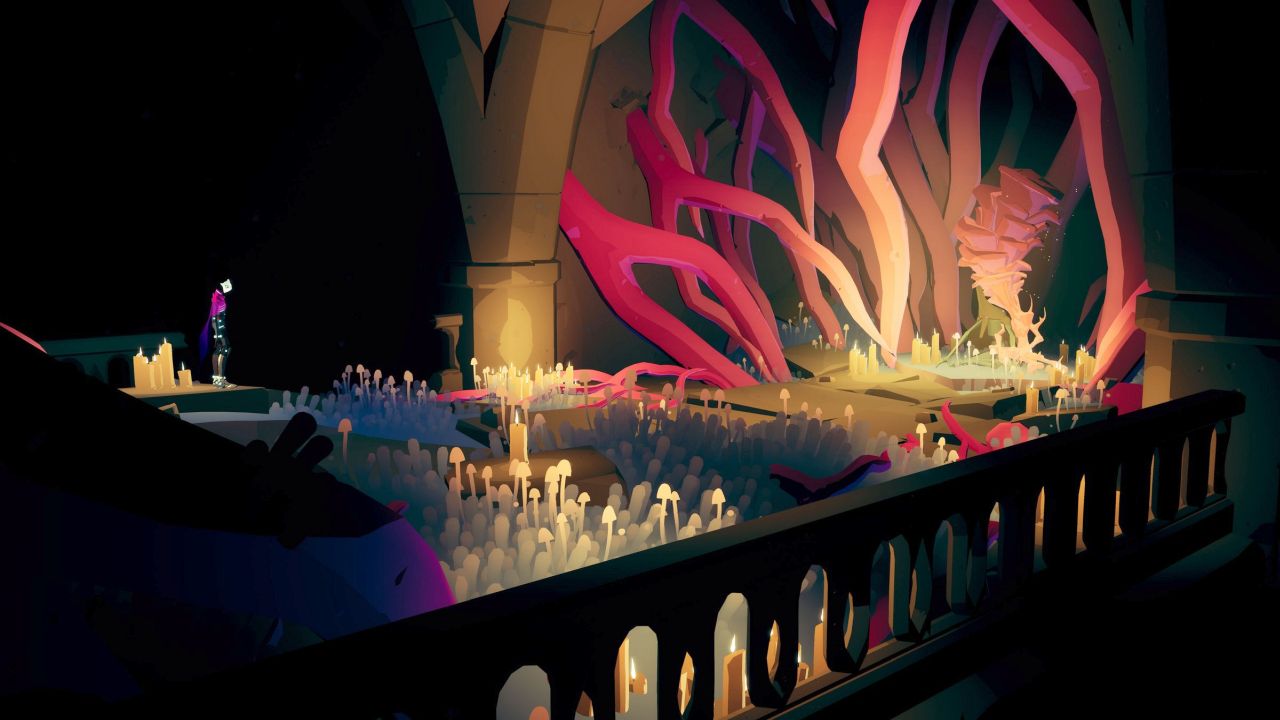 The story quickly places you in the high speed hover boots of protagonist Rei, a Voidrunner who is trying to stop a relentless black hole known as the Ultravoid from gobbling up her home planet. Having lost contact with fellow Voidrunners on the same mission, Rei is tasked with journeying within the Ultravoid itself, with her mission to power up the Starseed, a device created by the Voidrunners that may be capable of destroying the Ultravoid. Doing so is no easy feat however, as she must clear the Ultravoid of black puddles of ooze known as anomalies, alongside giant monolithic beings called Remnants.

The narrative of Solar Ash does a good job of providing reasoning for Rei’s quest, as do her encounters with Echo, a mysterious deity who you cross paths with after defeating each Remnant. Despite Echo’s warnings to Rei that she is doing the wrong thing and is blinded by her desire to save her planet and people, Rei continues on her merry way throughout the Ultravoid doing what she thinks is right, while you control her to do so. Akin to Shadow of the Colossus, the narrative succeeds in making you question whether or not you’re doing the right thing by killing these seemingly non-violent entities. When Rei starts to comment on how one of the Remnants is clearly scared, it starts to truly feel like maybe your actions aren’t that of a hero.

You won’t find me saying that the tale Solar Ash is telling is deep, but it does an admirable job at keeping you invested, providing engaging moments that keep you intrigued throughout the roughly 7 hour adventure. If the narrative piques your interest, there is additional lore that can be obtained by collecting the Voidrunner logs that are strewn throughout, with their contents containing audio logs from fellow Voidrunners that journeyed to the Ultravoid. The “true” ending is also a welcome and satisfying reward that is clever and results in a captivating final sequence. 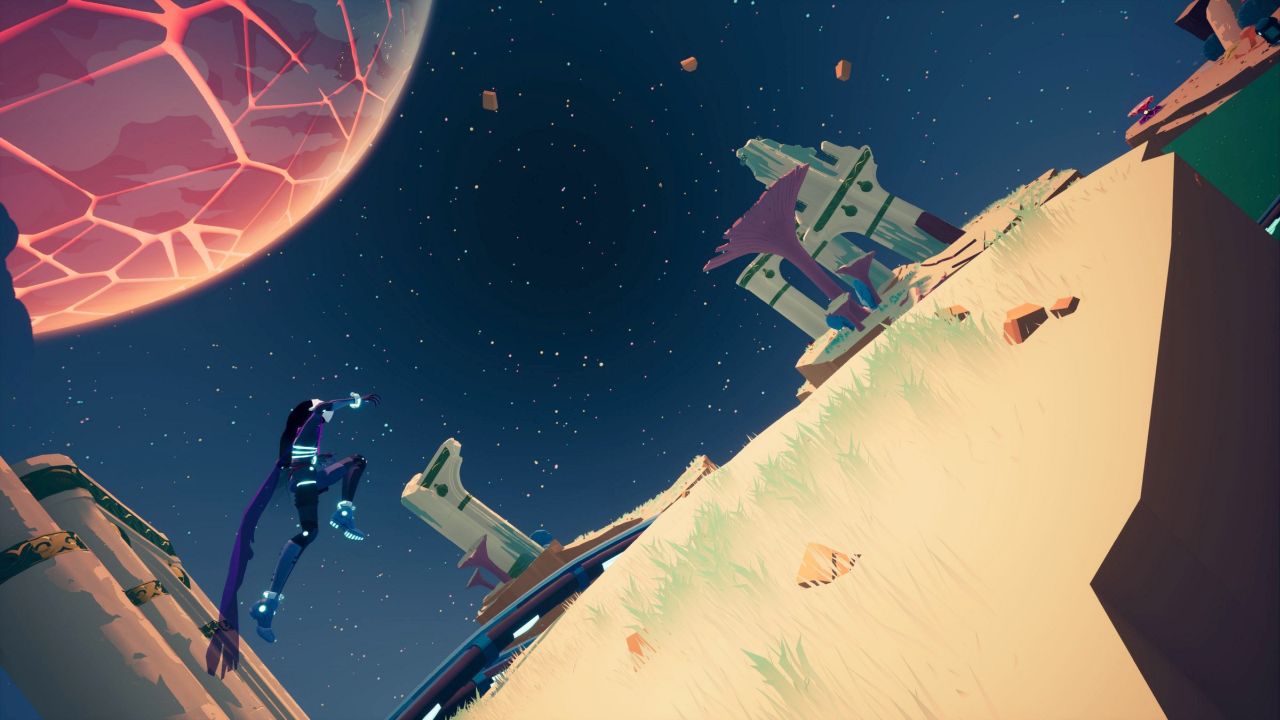 Also captivating is Solar Ash’s stylish sci-fi neon aesthetic, with the Ultravoid packed to the brim with an assortment of delightful colours, despite being situated within an all-consuming black hole. From the derelict city in Broken Capital to the slightly less colorful but equally beautiful Eternal Garden, the collection of locales are all visually appealing places for Rei to explore. The soundtrack also does a good job of enhancing the atmosphere, with the synth-heavy tunes feeling right at home in what is a surreal and alien world.

As Rei, your aim is to awaken and defeat the various anomalies that are scattered throughout various regions. Upon finding each conduit you then are granted access to the locations of each anomaly present in the area. You aren’t gifted with a map to easily glide your way over to the objective, but you are given the ability to scan for anomalies, which in turn provides a waypoint indicating how far you are from each anomaly for a short period of time.

Traversal from anomaly to anomaly is fast and fluid, thanks to the Voidtech gravity boots that allow for Rei to effortlessly skate across terrain. The boots also provide a hearty boost that makes Rei skate even faster, as well as the ability to grind on rails Sonic Adventure style. Controls can be a tad finicky in some instances largely due to Rei’s movement speed, but for the most part the act of platforming feels accurate and enjoyable.

Destroying an anomaly requires you to use your gravity dash and boost efficiently in order to strike blue spikes that protrude from the black ooze of the anomaly. Hitting a spike will cause another to appear for a short period of time, gifting you a small window of time to reach it. Failure to do so will result in needing to start the process again, whereas successfully whacking the spike will get you closer and closer to the anomalies exposed eye, which when plunged into with Rei’s trusty energy sword, will remove the anomaly from the area. This action then awakens the eye on the body of a Remnant, a colossal anomaly that will need to be defeated once all anomalies in the area are destroyed. 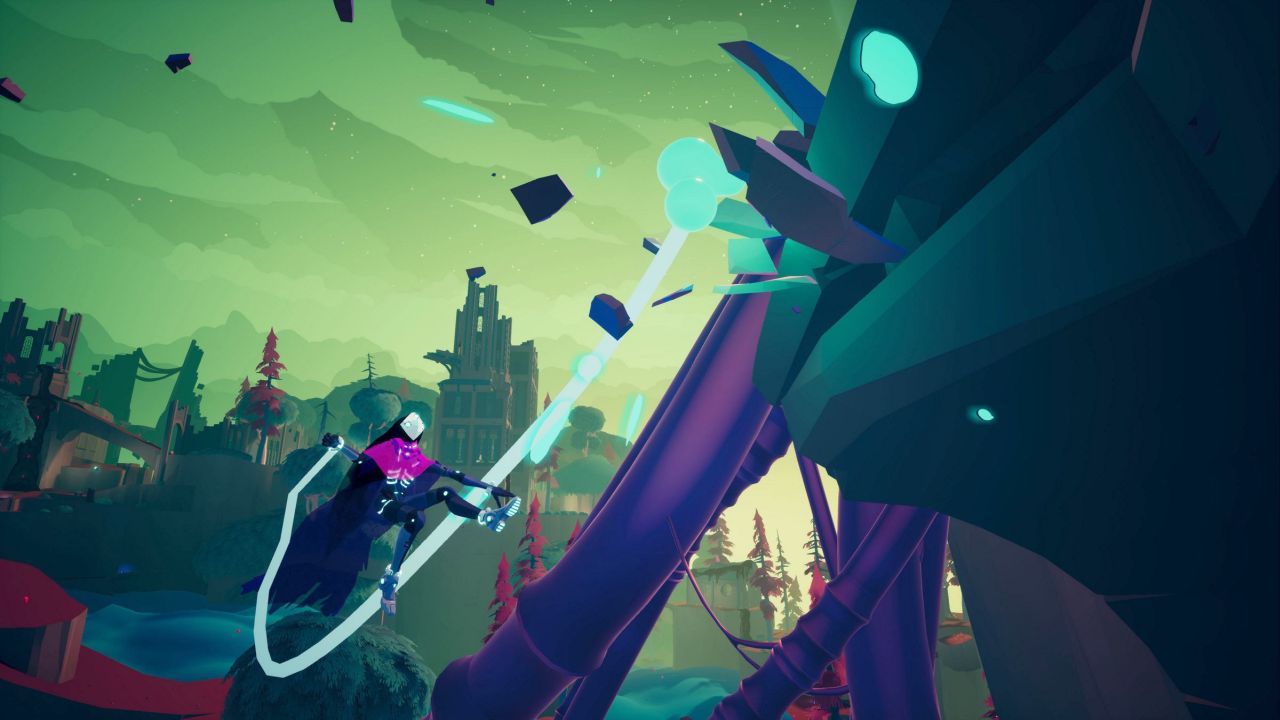 Like the small anomalies, Remnant boss battles are also time-sensitive platforming segments, but they take place on a far grander scale, requiring you to climb and slay the enormous creatures. Gliding across the body of the creature and striking its spikes is again the key to success here. These encounters are where Solar Ash is most thrilling, with fast and efficient platforming and knowledge of the game's mechanics required, resulting in a worthy challenge, one that can be made harder or easier with the various difficulty levels. The standard difficulty still requires efficient traversal, but is a lot more forgiving than the Hardcore Mode that is unlocked after finishing the game, which doesn’t offer any room for error in its platforming. There’s also an easy mode for those in need of a bit more time.

The gameplay loop of finding the conduit, destroying the anomalies and defeating the Remnant is fun to begin with, however it does begin to feel formulaic and stale, considering that not much changes between areas. It wasn’t until the latter half of my time with Solar Ash where I felt this way, but it was an overwhelming feeling that changed how I felt about the game.

Combat in Solar Ash is also very stale and simplistic, functioning as a ridiculously easy hack-and-slash affair for the most part. There are some minor enemies throughout the game that pose a bit more of a challenge (such as the ones that fire beams at you from a distance), but for the most part you are mashing a button to get them out of your hair. It’s a level of simplicity that would be acceptable if more variety in combat was introduced as the game progresses, but unfortunately it never comes.

When not in combat against minor foes or anomalies, exploring the Ultravoid is a worthwhile venture that will not only allow you to take in the sights and surroundings, but will also grant you with more narrative information and handy upgrades in the form of new suits and an increased health bar. 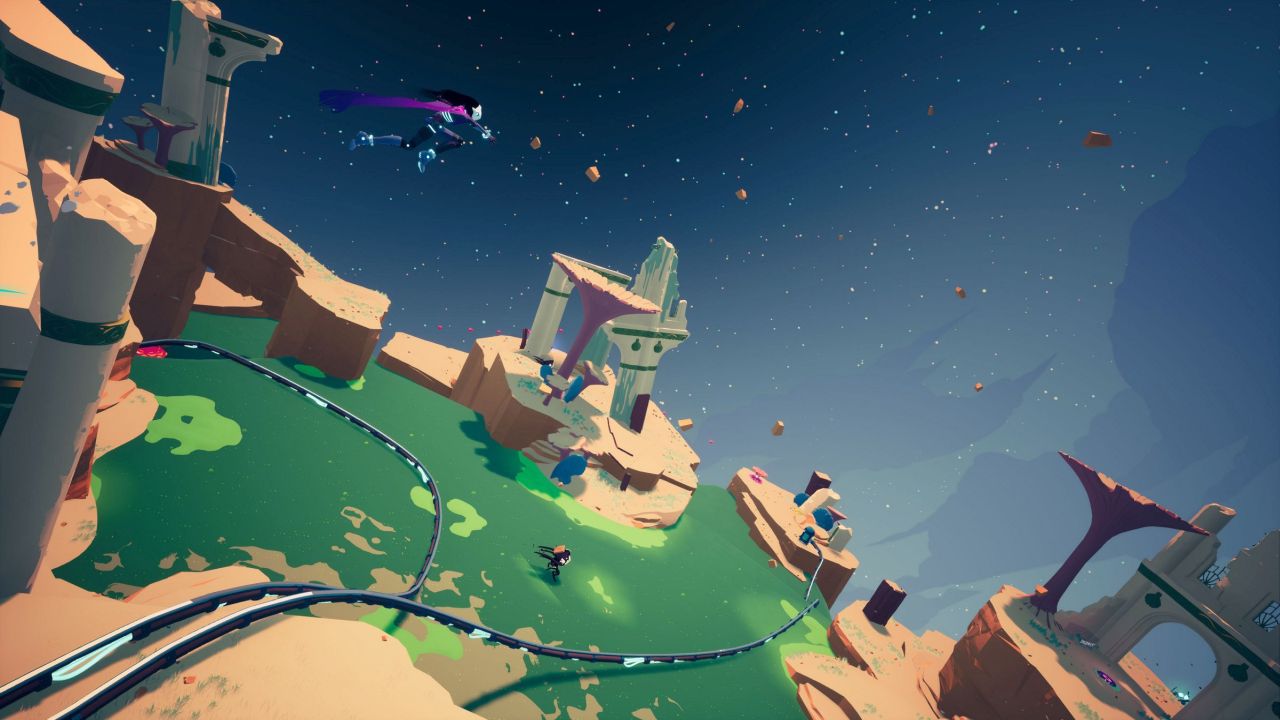 Globs of plasma litter the Ultravoid and serve as the primary collectible throughout the journey. Plasma can be exchanged for an increase to your health at any of the Starseed conduits, an investment that is handy to have given that Rei can be killed in just a few hits. The aforementioned Voidrunner Caches when collected also reward Rei with a part of a suit, with collection of each cache in a given area rewarding her with a stylish new outfit that provides a buff such as double attack power or no cooldown on her hover boosters. These suits are not necessary and the game can be cleared with the default suit, but they do exist as optional rewards that can help make things easier.

Despite being an experience where fluidity of movement is paramount, Solar Ash is let down by its performance in various moments. Throughout my playthrough on the PS5 version of the game, it was clear that it struggled to maintain its target of 60 fps, with noticeable dips that negatively affected the experience. Most befuddling about the frame drops was that there wasn’t anything out of the ordinary occurring on-screen, with the game running perfectly in some instances and then exhibiting a bad case of the framerate shakes the next. Even though it was never that severe, it was an unavoidable blemish on an otherwise smooth experience. 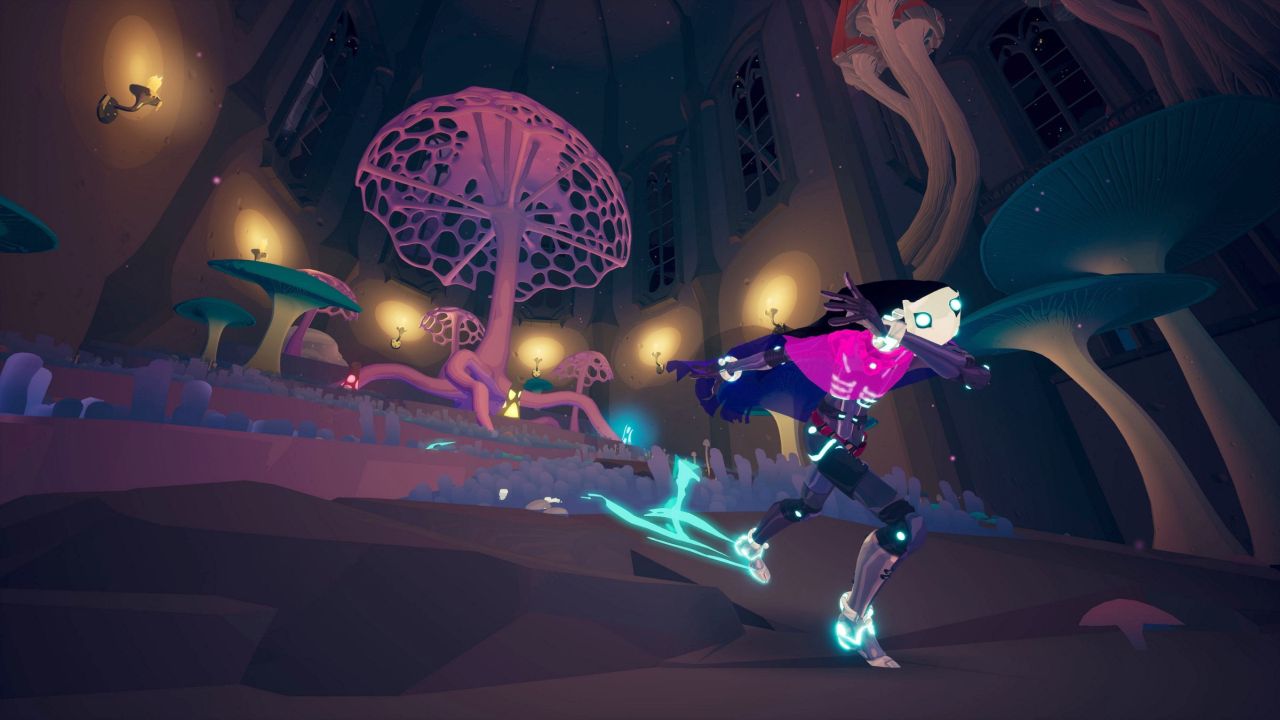 Overall, Solar Ash is a solid adventure that succeeds in telling a light yet engaging narrative, whilst providing enjoyable traversal and platforming within its uniquely colorful landscape. While its gameplay is challenging, it’s unfortunately also very repetitive, which quickly eats away at the promising foundations the game lays down in its opening hour or so. Compound the lack of variety with dull combat and a less than reliable framerate and it's clear that Solar Ash just has too many shortcomings to be easily recommended. The act of taking down mysterious beasts is cool, but the unfortunate reality for Solar Ash is that many games do it better.

Our ratings for Solar Ash on PlayStation 5 out of 100 (Ratings FAQ)
Presentation
80
The colorful neon future vibe is aesthetically pleasing, with the stylish synth soundtrack fitting perfectly with the atmosphere of the Ultravoid.
Gameplay
60
The act of exploration and defeating anomalies feels satisfying because of the fast and fluid movement mechanics, however the experience begins to feel stale as the adventure progresses due to the lack of new and interesting additions. Combat is mindless and boring.
Single Player
65
Narrative is pretty basic and content light, however it does a good job of keeping you interested as the story progresses. Side characters aren’t particularly memorable due to largely existing in audio logs, but provide welcome lore. Ending is surprisingly well executed.
Multiplayer
NR
N/A
Performance
70
Largely okay but exhibits an unstable framerate in certain areas throughout the adventure. I also had a couple of instances where plasma would glitch and disappear from the screen.
Overall
69
Solar Ash is a visually pleasing adventure that pulls you in quickly with its swift and elegant movement mechanics and a snazzy synth soundtrack. Despite the strong start, the experience begins to lose its grip the longer it goes, with unreliable performance and mundane combat. 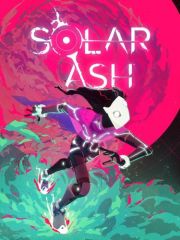 All videos for Solar Ash (5)
Advertisement ▼