Sucking it up, for nature

It is usually satisfying to transform an environment, especially when it involves bringing colorful life to someplace barren. In Stardew Valley, players grew their own plants and created a farm from scratch. In Hob, players removed an infection that choked a beautiful landscape. The Gunk is a third-person puzzle-platformer that is a bit like Hob in that it focuses on the removal of something toxic, but this time the process is manual. Players vacuum up a strange black goo substance from a rocky landscape, which then brings alien plant life and color back to an area. The Gunk is not a complex or difficult adventure, but it reinforces the calming appeal of a natural transformation. 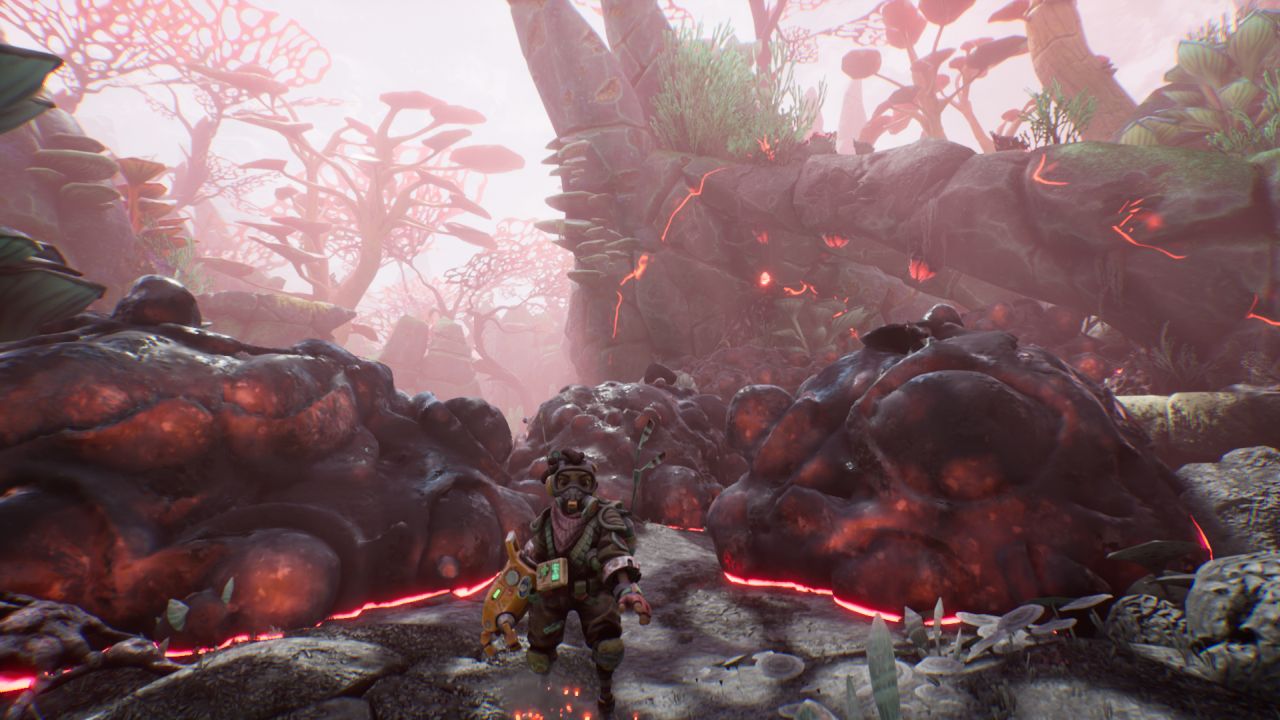 The Gunk tells the story of Rani and Becks, two young women with their own spaceship. They are hot on the trail of an energy source coming from a remote planet. The source’s precise location is unclear, so Rani drops to walk on the planet’s surface while Becks circles above in their ship. You take control of Rani and begin exploring a rocky alien planet that appears devoid of life. Eventually Rani comes across a shimmering blob of red/black goo that she calls gunk. After scanning it with her special power glove, she absorbs the substance and removes it from the environment. This cleanses the immediate area, bringing greenery and colorful alien plants back to life. Rani continues to remove gunk, clearing a landing zone so Becks can join her on the surface.

The two scavengers are not in perfect agreement about the mission ahead. Rani wants to continue removing the gunk and exploring, while Becks (who always stays near the ship) wants Rani to beeline for the energy source and forget all this junk about the gunk. This disagreement is clumsy, and it does not make much of a difference to the story itself, serving only to add a bit of conflict near the end. In terms of storytelling, the narrative does an adequate job of covering the basics. Both actors do okay with their voice work— they communicate mostly via radio—but more depth was needed for both characters. Regardless of their opposing views, Rani will need to remove all the gunk in her path, in order to progress and find the energy source.

The act of removing the goo is simple and satisfying. You just need to get close and suck up the voluminous blobs by holding the mouse button. Some of the gunk floats in the air and moves around in circles, and certain clumps might require jumping up a few ledges, but the act of consuming never changes or gets tedious. Explosive plant sacs can remove gunk that Rani cannot reach with her vacuum; she can throw the sacs or activate them from range. Once every chunk of gunk has been removed, plants dramatically return and bring new navigation routes. But some routes will need to be manually created; special spores can be found in the cleared areas and thrown into water pools to create mushroom steps that take players to the next zone. 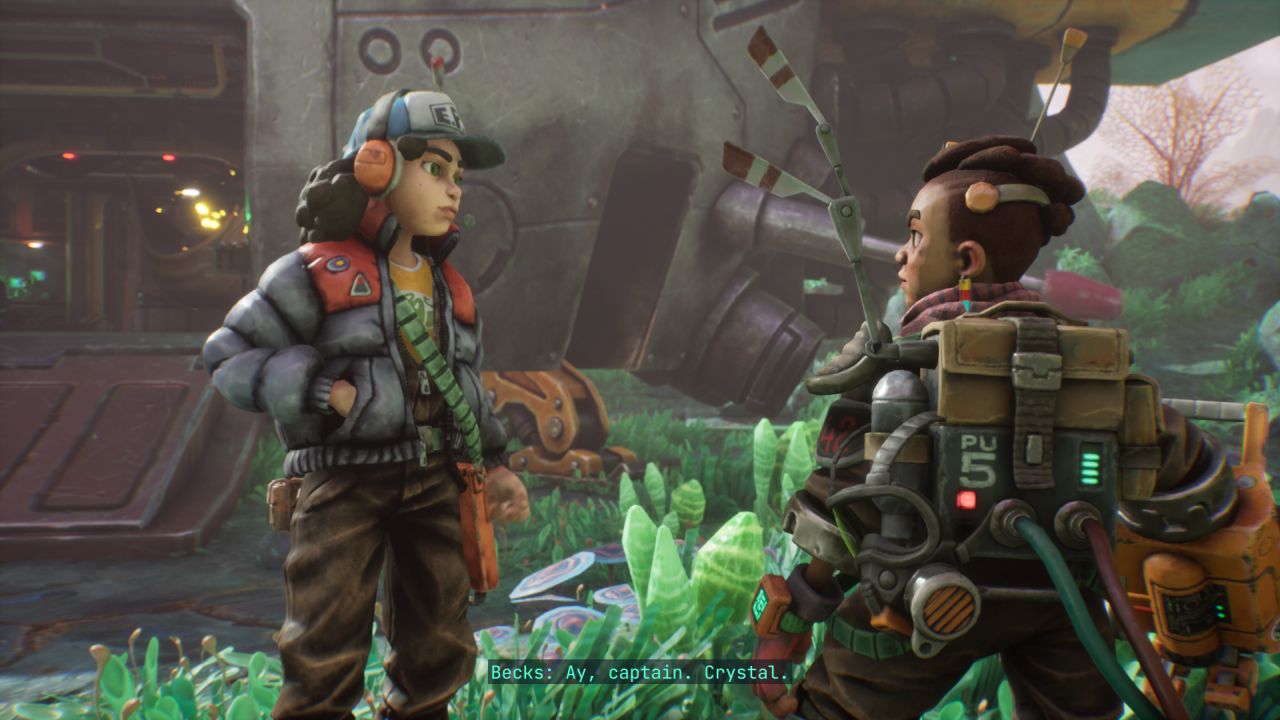 The environments in The Gunk are small and contained, but there are a few side routes that have things to scan and materials to collect. Scanning works a bit like in No Man’s Sky, and it provides some extra detail on things like alien structures. When a number of objects have been scanned, Rani unlocks an upgrade for her power glove—her only tool. But to craft an upgrade, she needs resources. Some plants can be pulled apart for organics and metal can be found in resource nodes. The various upgrades can be equipped back at the ship, and fast travel allows you to return frequently enough, although this is really the only reason to return to any zone. Upgrades are fairly basic and typically unnecessary, but one is needed for progression: a plasma projectile that activates switches remotely. Most upgrades are helpful enough, offering increased vacuum speed, quicker projectile fire rate, faster run speed, and more health.

Bonus health can be useful because hostile creatures will begin to emerge from the gunk. Most of these are little critters that charge at Rani and are best defeated by merely sucking them up with the glove and throwing them against the ground. The egg-shaped hunk of gunk they emerge from can be vacuumed before they hatch, too. One of the glove upgrades allows you to drop a lure to distract the enemies but it isn’t really needed. There are a few other hostiles, like a stationary plant that flings explosives and a much tougher charging foe. But despite these few enemy types, the combat is not frequent or hard. This low-level action suits the adventure which is designed to be a relaxing one.

Even the puzzles and platforming elements are quite easy. Progress is steady, with no major obstacles that require pause. Only in the last few chapters does the player need to demonstrate a bit of skill and smarts. For example, plant sacs are usually placed quite near to their destination, until the end where they might need to be thrown over multiple gaps (since jumping is not possible while holding a sac). Explosive orbs might need to be dropped on a moving platform to destroy distant goo, too. Jumping across gaps only gets tricky when rotating platforms are involved, or hostile ranged plants are in the area, but any fall automatically revives Rani on a nearby ledge (like in Prince of Persia 2008). The jumping process is fluent and gaps between platforms are forgiving. Plus the colored ledges make it obvious where to go next. 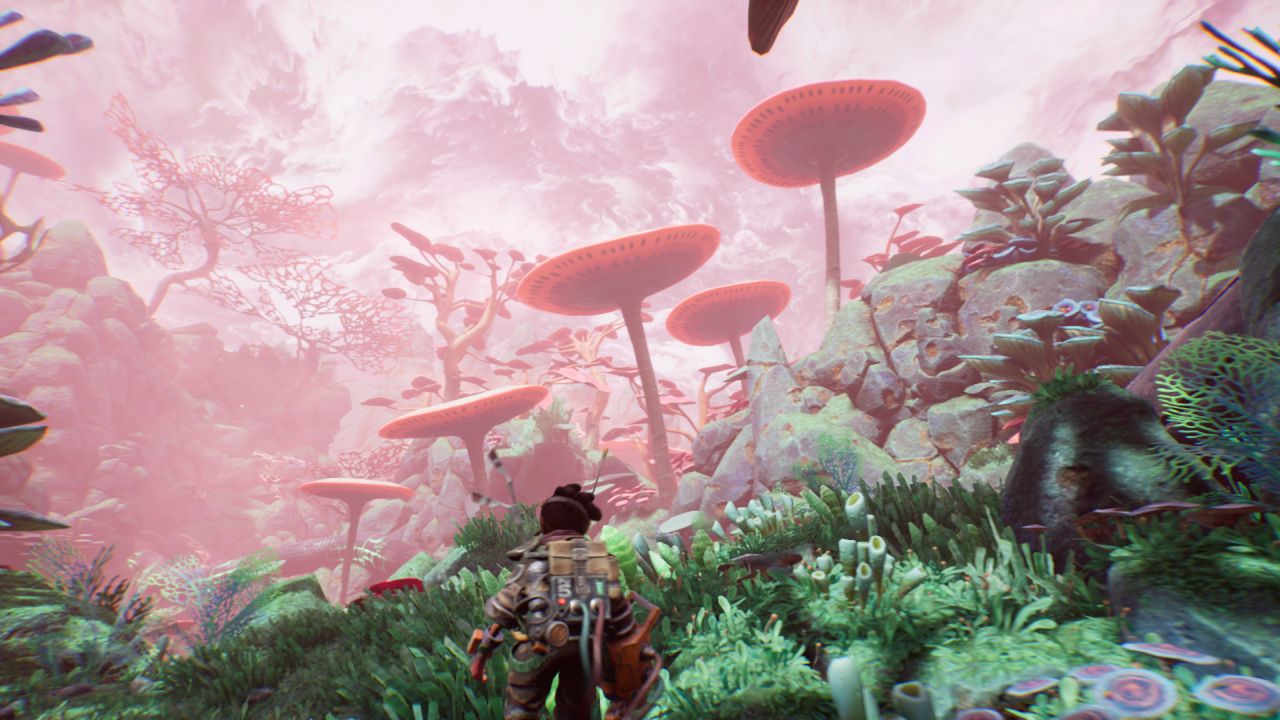 Like other simple games, the pleasing visuals mesh well with the adventure. The gunk blobs look neat and pulsate disturbingly, begging to be sucked into oblivion. When an area is cleared, the natural alien landscapes that appear are nice, with some basic physics interaction. It is disappointing that what is seen in the first hour is never eclipsed across the nearly five hour experience, partly because the game spends a bit too much time in dank caves. Fortunately it has some good subtle effects, like the particles that float up when Rani walks across black sand. The two main characters are stylized to look like claymation figures, which fits with the world design. Performance is usually acceptable, although there were a few bad framerate drops when ascending an elevator in one section.

The Gunk is just a relaxing and visually pleasing adventure game. The subtle effects and interesting alien landscapes are a nice reward for all the goo vacuuming. Puzzles, combat, and platforming are easy but suited to the lightweight adventure. It does at least offer a few more worthy challenges near the end. The story contains enough to drive things, despite some flat characters and tacked-on conflict. So The Gunk is not a revelation, and you might not even remember it in a few years, but it is a decent way to cleanse the mind between the bigger and more invasive titles.

Our ratings for The Gunk on PC out of 100 (Ratings FAQ)
Presentation
75
It has nice gunk effects and pleasant alien landscapes. Subtle visual effects are good and the voice work is up to the task.

Gameplay
60
Consists of basic platforming and puzzling, with some power glove upgrades that generally only make a minor difference to what is mostly about gunk removal.
Single Player
60
The characters have some personality but they are mostly flat and the conflict between the two feels artificially constructed for little gain. At least the story covers the basics.
Multiplayer
NR
N/A
Performance
(Show PC Specs)
CPU: AMD Ryzen 5 3600
GPU: XFX RX 480 GTR Black 8GB
RAM: 16GB DDR4
OS: Windows 10 Pro 64-bit

70
There were some bad framerate drops during one elevator ride. Some areas are rather small with irksome loads between them that take a few seconds.
Overall
67
There is nothing special or complicated about The Gunk, but it proves to be a relaxing and light adventure that focuses on the manual removal of a toxic substance and the abrupt return of nature. 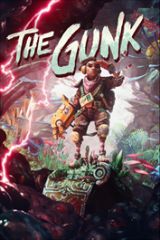