A fun game in need of an attitude adjustment

First impressions are very important. With the number of games available to anyone at a given moment, making sure you deliver right from the jump is a must for any developer. Failure you to do so could result in players abandoning your title, or worse, not even giving it a chance. It's a tough slide to recover from. Credit must be given to Ubisoft Annecy, which manages to course correct quickly on Riders Republic after a very poor first impression. 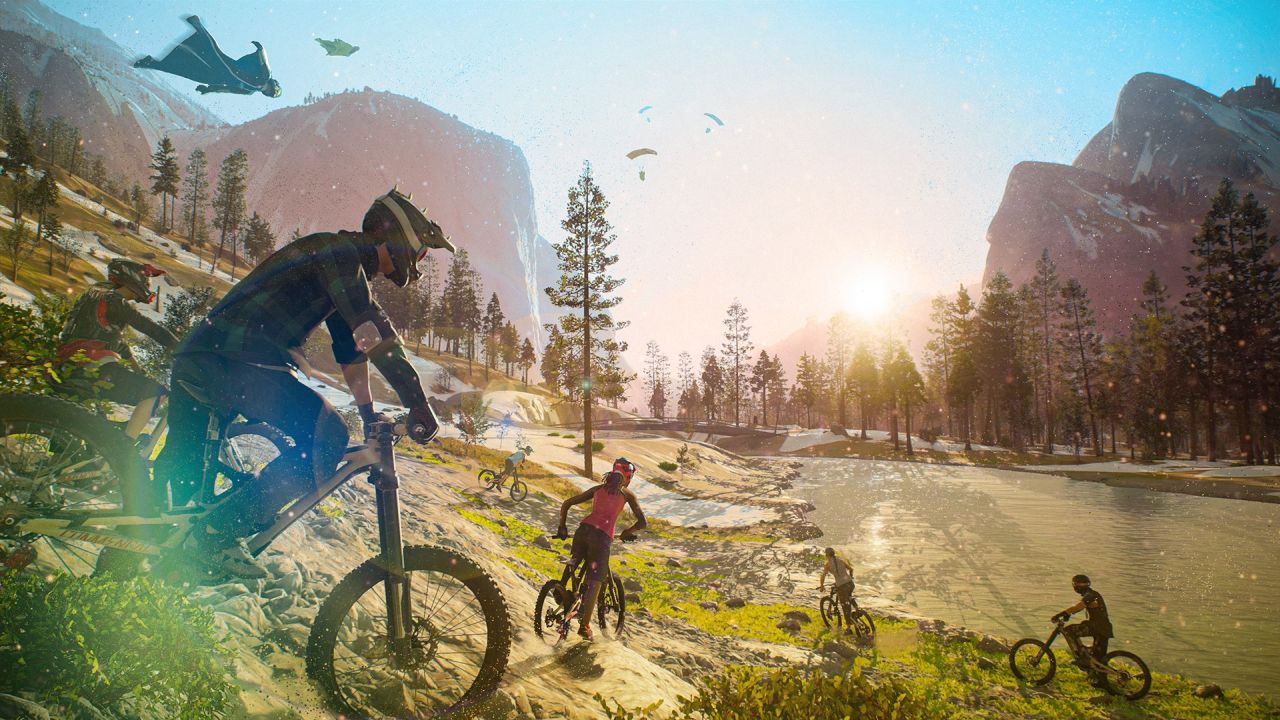 Upon entering the world of Riders Republic for the first time, you are greeted by two of the most grating NPCs in recent memory. There's Suki, the feisty chick who first notices you hanging around the Republic, and the mentor she introduces you to. Both are constantly spouting off slang that is either wildly out of date or was never in fashion to begin with. And while their overbearing personalities are more prominent in the beginning, they still frequently pop up while you are riding around or heading to a new activity. I generally try to avoid doing so, but this is the first time in a long time where I completely muted NPC dialogue. Based on that terrible opening impression, I felt like I was heading into an extreme sports experience best left in the early 00's.

Thankfully, once you are given the opportunity to explore the world created by the studio, things get significantly better. The Republic, which is the name of the extreme sports landscape the title takes place in, is comprised of seven distinct parks from the United States. The high peaks of Grand Teton and the stunning vistas of Bryce Cannon are just a quick ride from one another. Is this realistic in any shape or form? Absolutely not. But Ubisoft Annecy already did the realistic thing with their previous effort Steep. Now, it's time for them to truly embrace their extreme sports ways, and that means creating a world where you can seamlessly transition from skis to mountain bike.

As of right now, there are six different career paths for you to explore in Riders Republic. These six paths are split between three styles: snow, dirt and air. Snowboard/Ski Freestyle and Bike Freestyle are trick-based activities, while Bike Racing and Snowboard/Ski Racing are fast-paced races. Wingsuit challenges are death-defying trials that test your mettle, while Rocket Wingsuits are designed for anyone who has ever dreamed of having their own personal jetpack. In addition to these options, there are also even more fantastical rides out there for you to uncover. Known as Funkies, these are comical options such as ice cream carts that give you even more rides to choose from. 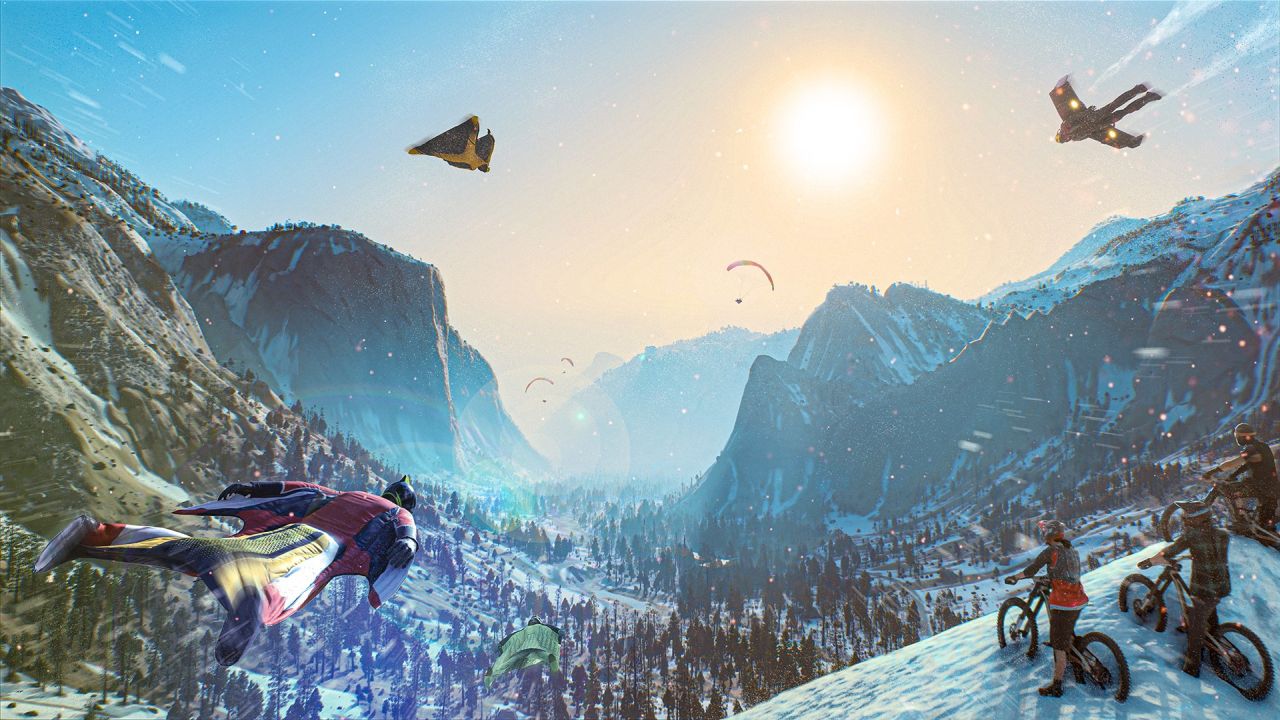 Pretty much right from the start, you are given free reign to traverse the Republic as you see fit. The sprawling world is ripe with activities to tackle, and perhaps best of all, there are no load times as you move from one section to another. This is an incredibly impressive feat from the team at Ubisoft Annecy. Not only due to being able to ride from one end to another with no delay, but also the fact that the design of the world is constantly changing. From snow to sand and back again. If you don't wish to bother with the long road, though, you are free to fast travel to individual events across the world. A less fun way to travel for sure, but one that definitely speeds your career along.

The single-player campaign of Riders Republic isn't much different from past extreme sports titles. Each of the six paths have their own competitions to complete. Completing each one will reward you with a star, as well as boost your level of proficiency for that specific sport. As you level up, you'll unlock additional rides for said sport. Stars are dumped into one big pile that signifies your overall level within the game. Stars unlock additional competitions, new gear and sponsorship contracts. In addition to completing events, stars can also be earned by completing side-goals for each event. These include nailing a specific trick or finishing a race in under a certain time. You can also earn stars by visiting scenic and historic areas found within the Republic. Another reason why you should take the time to explore the world when you can.

Of the two categories careers are fit into, I found myself more engaged with racing than freestyle. After honing their craft with Steep, the development team managed to create a system that delivers an exhilarating sense of speed that doesn't sacrifice control. Whether you are choosing to race in the traditional third-person view, or testing out the first-person option, Riders Republic truly makes it feel like you are barreling downhill. The thrilling sense of speed is found across all three major disciplines as well. And while you still need to be aware of your fellow riders, the threat of losing control isn't as much as an issue as I thought it would be. The controls are tight and precise enough that I never felt like an error during a race was of any fault other than my own. 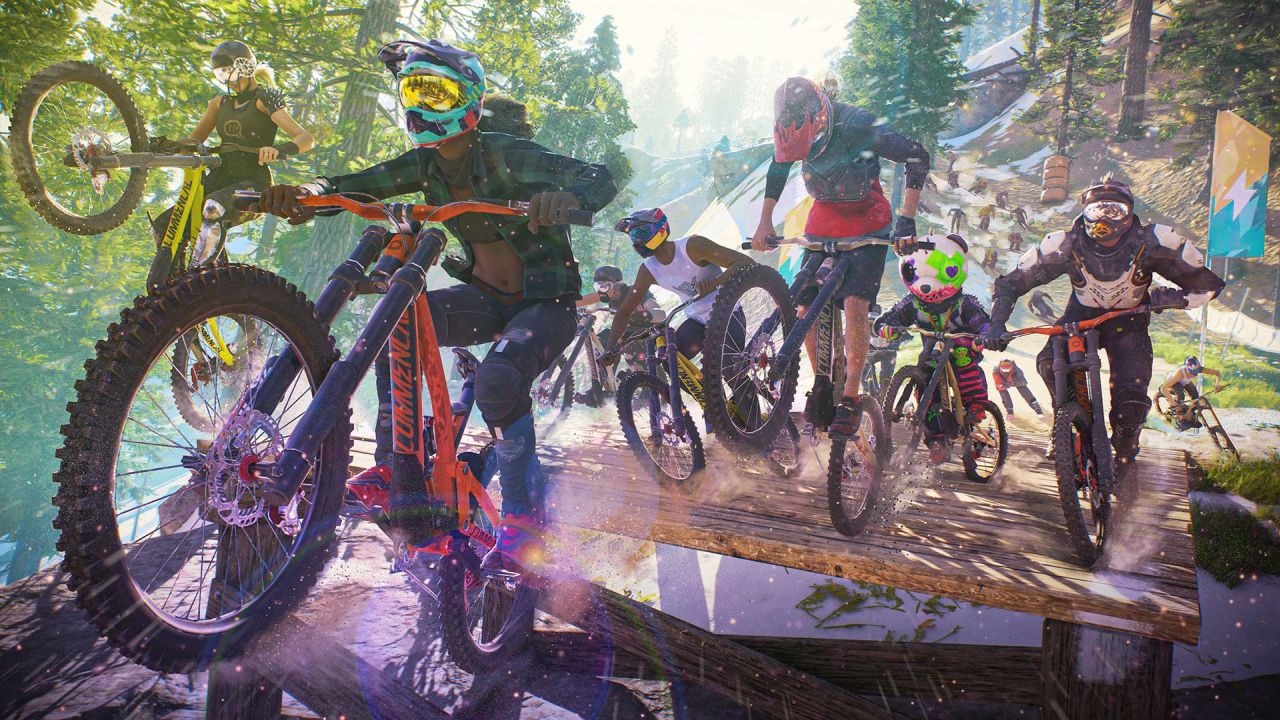 Freestyle competitions are a fine diversion, but I felt they lacked the excitement of the races. For pulling off tricks, you need to hold down a specific face button as you approach a jump. For example, one button controls flips, while another controls spins. From there, you use the triggers to modify what you are doing in mid-air. Then, depending on what control system you are using, you will need to manually land the trick perfectly, or let the AI handle that delicate portion. The trick system itself is fine once you understand its nuances, but I never really felt an incentive to switch things up. Sticking to a handful of tricks I knew I could nail perfectly was often good enough to win events. It can get boring after a while, which is not something I felt while racing.

If you get bored of riding solo, Riders Republic offers up a solid suite of multiplayer options as well. You can rope in your friends to compete in every competition found on the map, which is a nice feature. Tricks Battle is a team-based mode where you compete against each other in order to capture different districts. Free For All mixes things up by letting you face off against 11 other riders in playlists that throw together all kinds of different events across the Republic. The headliner of the multiplayer options are the Mass Races though. These are time-limited events which pop up throughout the day. 64 racers compete against each other in three different triathlons. Whoever has the greatest number of points after all three, wins. Obviously, this is as chaotic as it sounds. You are constantly bumping into each other as you jockey for position, and since you tend to be moving quite fast, you are constantly getting thrown wildly off course. It's gleefully absurd, and something I always chose to take part in when it popped up.

It should be pointed out that Riders Republic does have its fair share of microtransactions. Thankfully, these are only for cosmetics, so you don't need to worry about any pay-to-win sneakiness happening here. There are two kinds of currencies; the cash you earn from competing events, and gold coins that can only be acquired through real-world cash. The shop has a daily selection of options that can be purchased with either currency, but the more elaborate options are typically only available through the gold coins. It's by no means the end of the world, but keeping certain items behind a paywall is undeniably shifty. 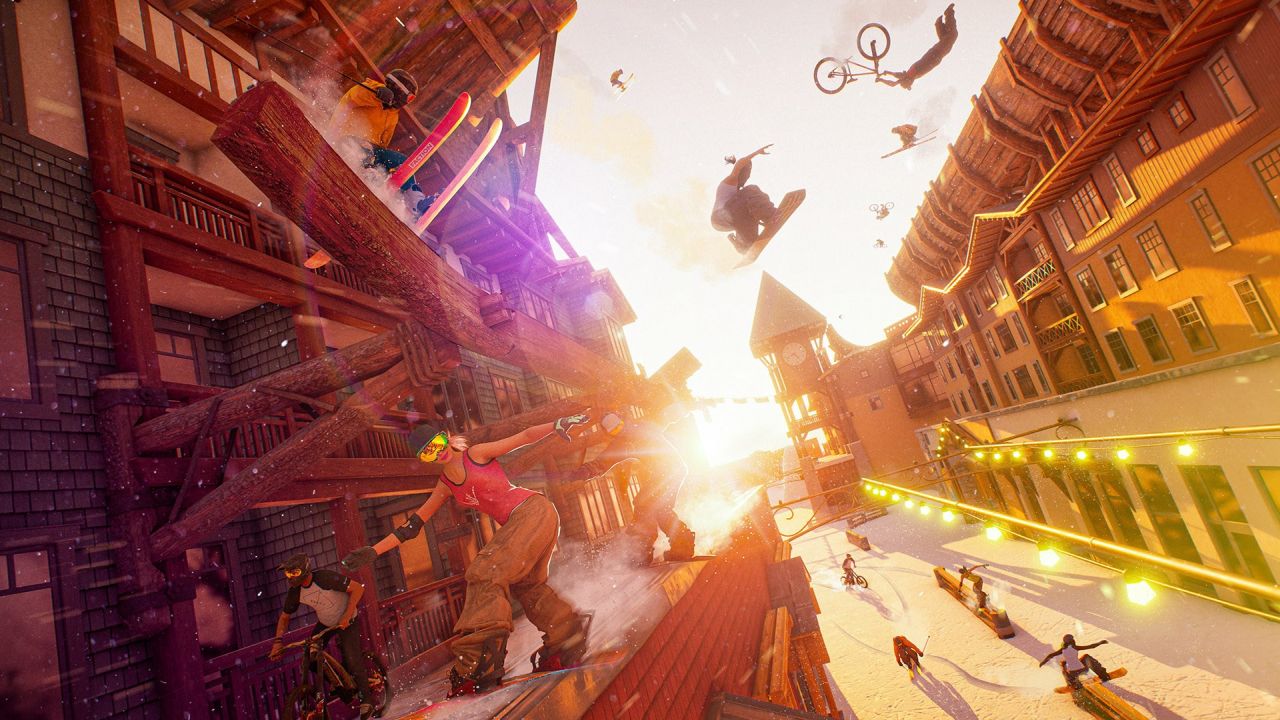 The visual fidelity of the title on the Xbox Series X is solid across the entirety of the Republic. Considering their history in the snow, it's no shock that Ubisoft Annecy knows how to showcase the beauty of winter. However, they are equally adept at making dirt roads and greenery eye-catching as well. I was also impressed at how well everything looked despite the high-speeds you frequently travel at. The riders themselves animate great as well. Their movements accurately fit whether you they are rounding a bend or nailing a backflip.

Perhaps owing to the painful script, but the voice acting is pretty terrible. The character that acts as your mentor sounds like a B-rate TJ Miller, which means every bit of dialogue he has is instantly grating. Having to constantly deal with this buffoon popping up remains my biggest issue; the lackluster soundtrack also disappoints. Latter day Green Day, Crazy Taxi-era Offspring and the ever obnoxious “Black and Yellow” are some of the lowlights of the package. I'm not sure if it was just an issue on my end or not, but it seemed like certain tracks are repeated way more often than others. Again, it got to the point where I just switched off the soundtrack and just played the game with a podcast on in the background.

Riders Republic is an exhilarating experience that is packed with content for players to mess around with. Whether racing downhill or flying around the Republic itself, I was constantly able to find ways to entertain myself. However, in order for you to get to these enjoyable moments, you need to push through some of the most aggravating dialogue and characters in recent memory. Ubisoft Annecy tried to tap into a specific kind of tone, and whiffed on it completely, but don't hold it against them, as they still nailed the gameplay.

Our ratings for Riders Republic on Xbox Series X out of 100 (Ratings FAQ)
Presentation
70
Riders Republic looks fantastic regardless of where you are racing. However, the obnoxious voice acting and lackluster soundtrack are a constant bother.
Gameplay
84
Thanks to tight controls, racing in Riders Republic feels excellent. I always felt that I could control myself, even when it seemed like I couldn't. The trick system is solid as well, but it doesn't always challenge you in ways you would like it to.
Single Player
55
The overarching narrative of making waves in the Republic is a drag due to the poor script. However, the career mode ultimately ends up as a bland, if familiar, mode.
Multiplayer
80
The multiplayer suite of options is robust, and Mass Races are chaotically enjoyable.
Performance
80
Outside of the server issues with multiplayer, I found that the title performed well on the Xbox Series X.
Overall
78
Owing to its precise gameplay and satisfying open-world, Riders Republic has the makings of an extreme sport fan's dream. It just would have been nice if the title's exhausting and obnoxious attitude had been checked at the door.

Our Review of Riders Republic
78%
Good
The Verdict:
"A fun game in need of an attitude adjustment"
Game Ranking
Riders Republic is ranked #576 out of 1775 total reviewed games. It is ranked #18 out of 106 games reviewed in 2021.
575. Immortals Fenyx Rising
PlayStation 5
576. Riders Republic

All videos for Riders Republic (4)
Advertisement ▼