I AM FISH
Platform: PC
43
SummaryNewsArticlesVideoScreens

I Am Fish Review

What is the difference between a frustrating game and a difficult one? Typically a frustrating game is also difficult, but the reverse is not always true. Games become frustrating if there is an inherent unfairness or clumsiness. Maybe the game does not abide by the rules that it sets for the player or has too much trial and error. It might even lack the appropriate rewards that make the tricky parts worth all that time and effort. I Am Fish is a third-person physics-based adventure from Bossa Studios. It is also one of the most frustrating games ever made, for the above reasons and more. 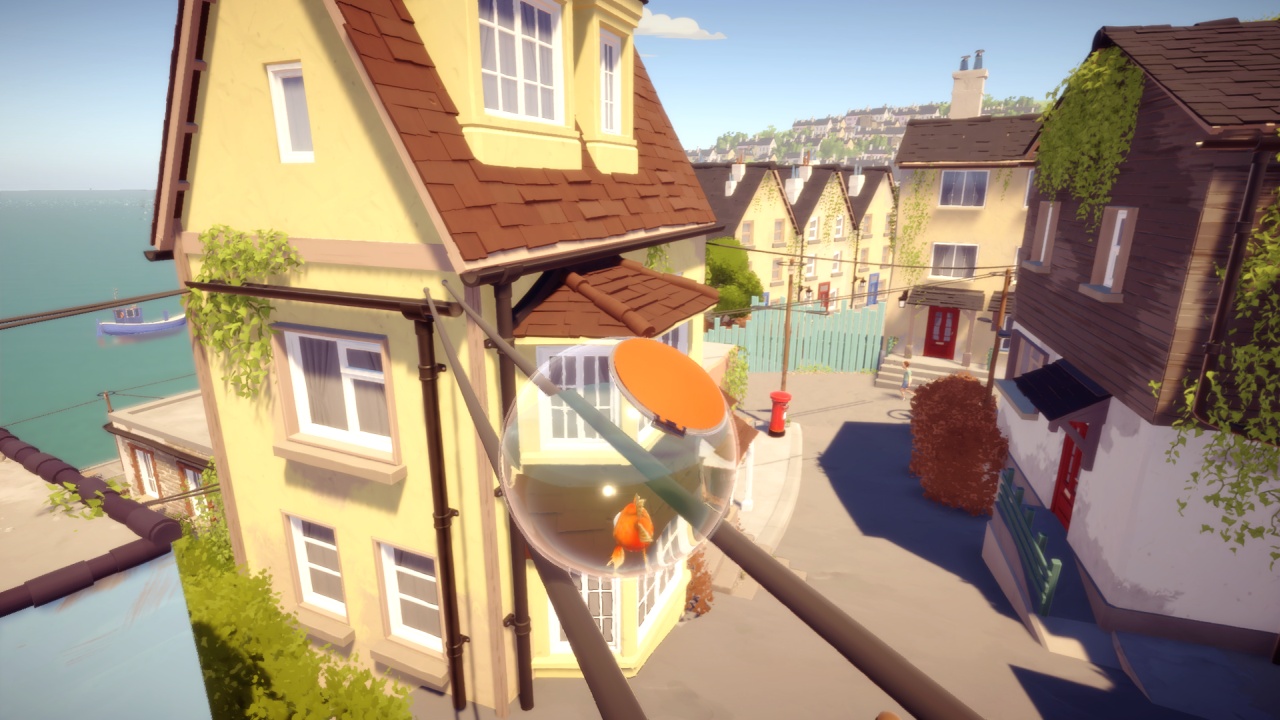 There is not much story in I Am Fish, aside from the fact that you become a fish, as the title so eloquently describes. Actually you become four different fish: goldfish, pufferfish, piranha, and flying fish. These four water dwellers start the game in a pet-shop aquarium, enjoying each other’s company. But their fun is short-lived as they are separated and taken to different corners within the county of Barnardshire.

The player’s goal is to reunite the fish by guiding them across the town, from one body of water to the next. As they travel through houses and streets, random human characters tell jokes or vocalize memes. Despite how many times the game tries to be funny, it is remarkable how it never succeeds. But this lack of humor does not distract our fishy fellows from their ultimate goal, which is to reunite out at sea—not so easy, as you will soon see.

Players begin by controlling the goldfish in third person. You can swim up and down, left and right, and also leap a short distance out of the water. On land, you will be able to flop around to potentially get back into water, if there is only a short distance to travel. 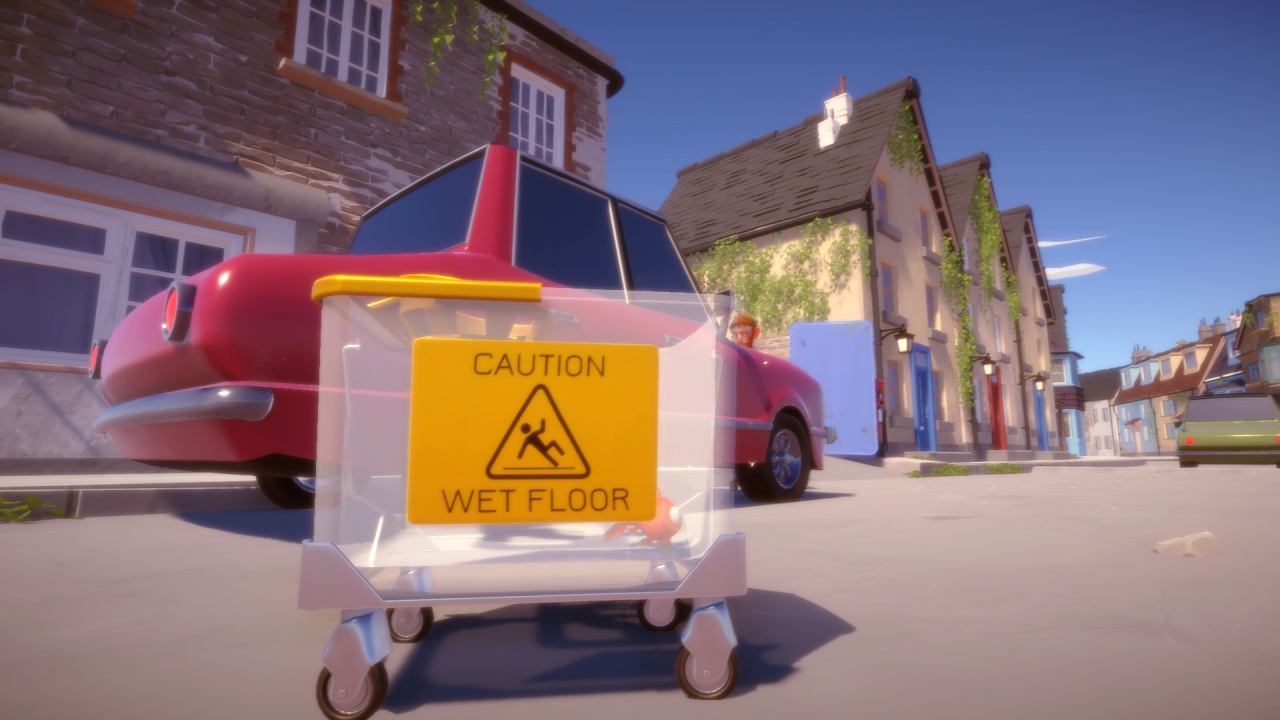 Since the adventure starts in town, much of the journey takes place on land within portable water containers. There are a few different types to commandeer: fishbowl, jar, and mop bucket. These tiny water reservoirs have their own physics properties and swimming into the side makes the container move in the intended direction—at least, that was the plan.

Unfortunately navigating while inside these water containers is extraordinarily awful. Steering the fishbowl is like those marble blast games of yesteryear, only far clunkier due to poor responsiveness. You will have to navigate across narrow human structures, like desks and shelves. But if you fall (and you will many times), the bowl breaks and the fish is a goner. The jar and mop bucket are no better to control. The jar requires different tactics since you need to push against one end to change its rotation; it is infuriating just to move in a straight line. And the wheeled mop bucket is prone to tipping over just about everything.

None of the containers are enjoyable to pilot and navigating is often at the mercy of the game’s funky physics. All containers can get stuck on many things found in the world. Most are there to offer more ‘challenge’, like the extra challenge you’d get by scaling Mount Everest on roller skates. The difficulty in I Am Fish is inconsistent and poorly tuned. Things rarely go to plan because every action is tedious. A few mishaps are out of the player’s control because contraptions break, like when you extend a ladder and slide down it, only to get stuck half way. Other scripted events happen—such as when a ventilation shaft collapses—and if you’re too close, it knocks you off course and requires respawning from the last checkpoint. It is not always clear what is happening with the physics, and reattempting sections is both maddening and necessary. 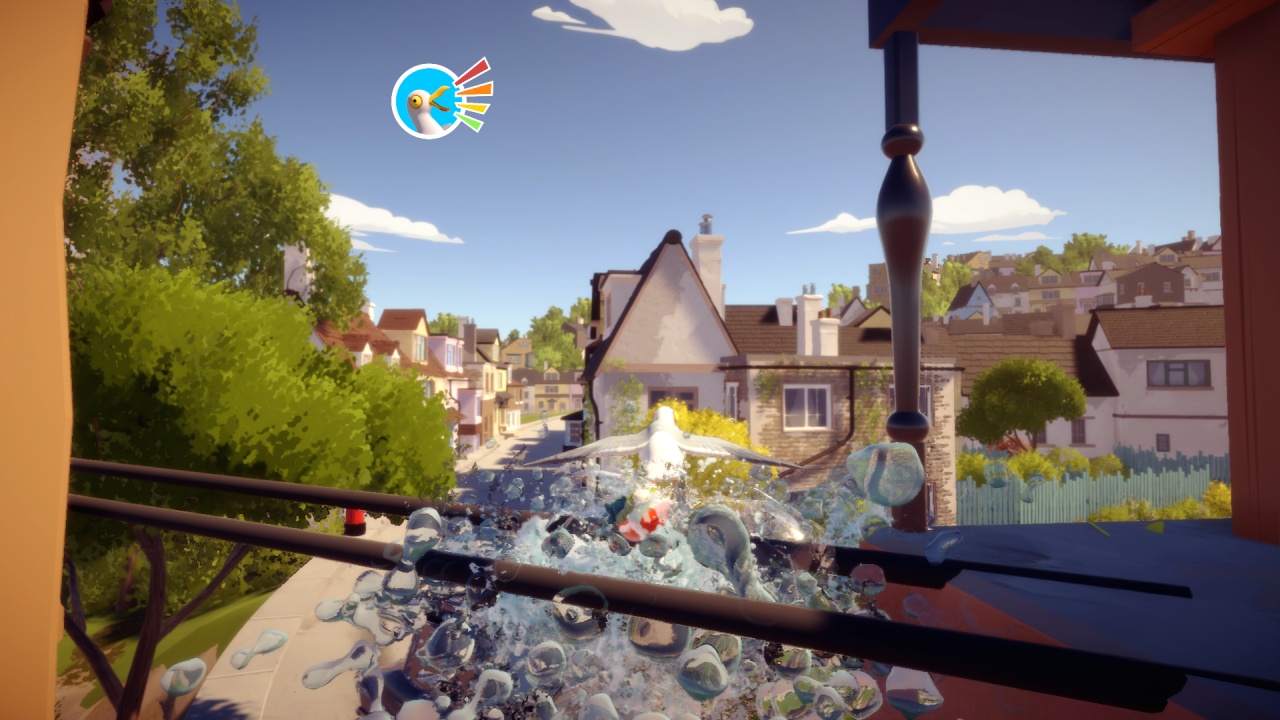 And yet it gets worse, thanks to faux stealth. Sometimes the portable water containers must be piloted while something dangerous pursues. Humans give chase (and will kick the bucket), but the worst stealth sequences feature birds, while you roll about in a jar or fishbowl. The birds swoop low, knocking the container off course and eventually breaking it. Players must take respite under tables and then make a crazy roll for the next hiding spot. Once detected though, the game decides to play unfair. Birds will fly straight through buildings to smash the jar or bowl into fragments. All physical objects in the world are intangible to our feathered friends. This alone makes it clear that I Am Fish is unnecessarily frustrating.

Unlike the goldfish, the other three fish have special abilities that provide changes to the regular gameplay. The pufferfish can blow itself up into a ball to roll along the ground or launch itself high out of the water. This works okay but the time limit out of the water is short and leaping onto horizontal ledges is trickier than it should be.

The piranha can bite things and hold onto them, to pull off vents or even swing on ropes in the air. The little chomper has the best segments, where you turn valves or bite containers to raise the water level. Flooding a small area, like a bathroom, is the only time the game becomes mildly enjoyable. 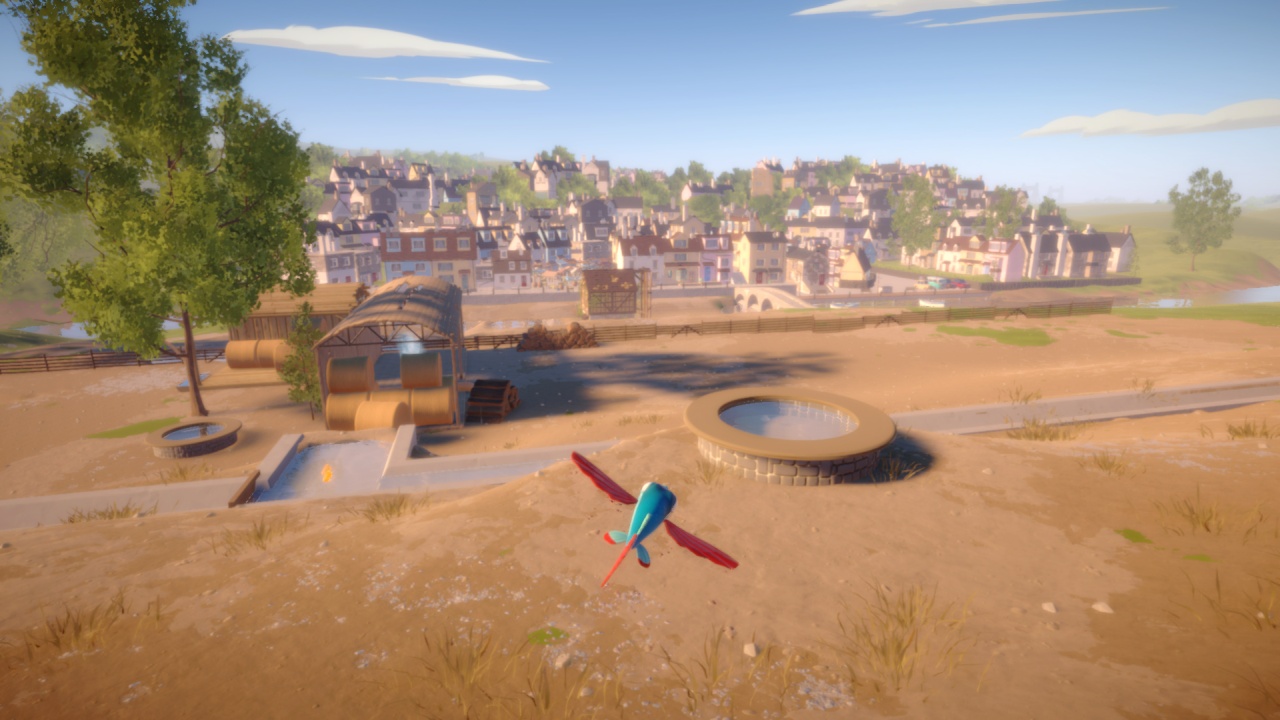 Finally, the flying fish can glide in the air after it leaps out from the water. The gliding controls are tolerable, if you regularly play flight simulator games while blindfolded. What really hurts the gliding sequences are the inadequate launching spots. You need room in the water for both forward and upward momentum, which is not consistently offered, and the small pockets of water also make the camera an unnecessary obstacle.

While all the special abilities seem like they would turn the game into a bearable adventure, this is not the case. All fish still have to endure the horrible sequences of navigating through the town inside the painful portable containers. When you do finally reunite the fish, after five hours of torment, it becomes possible to swap between them at any time. This briefly turns the game into more of a puzzle than a navigational nightmare. But it has one more annoyance up its sleeve: non-controlled fish follow so closely that they get in the way when trying to perform basic tasks. So no matter what the game does, it finds a new and horrible source of frustration.

On the visual front, I Am Fish is merely adequate. The art style is derivative and basic. Some of the environments look alright and it does at least try to use different colors on a level-by-level basis. The water reflections regularly look dreadful, with jarring edges and bad aliasing. Technically it has a lot of stutters too. But the worst part of the whole package is the music, which is so repetitive and plain that banging your head against a brick wall will create more pleasant tunes and result in less brain damage. 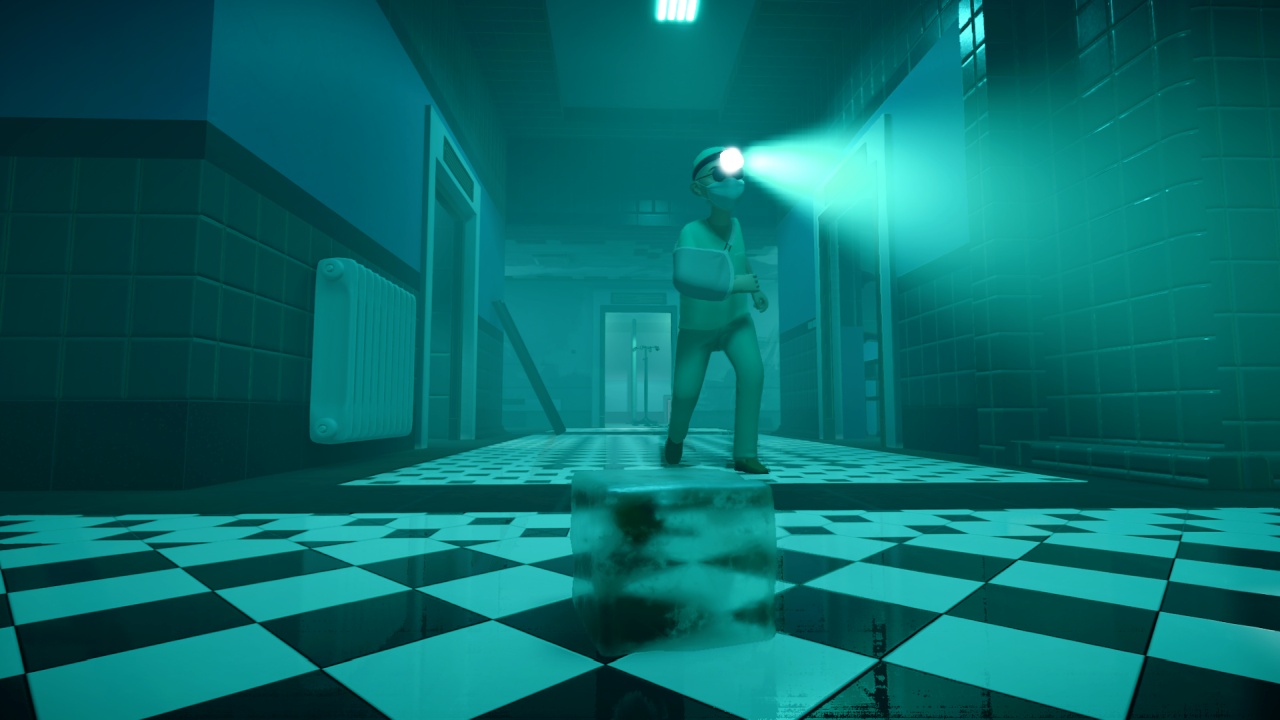 I am frustrated by I Am Fish. Despite an interesting concept, here is a game that has so few redeeming features because it constantly trips up with horrible mechanics. It has some atrocious navigation while steering the portable water containers and unforgiving physics makes every facet more annoying than it has any right to be. Three of the four controllable fish have special abilities, and while they are not always used badly, they are often at the mercy of extra clumsiness. Sadly, like a big fish in a small bowl, there is nothing but torture within the watery confines of I Am Fish.

Our ratings for I Am Fish on PC out of 100 (Ratings FAQ)
Presentation
55
The town looks okay with adequate visuals for structures and some more colorful levels. The music is so mind-numbingly repetitive that it would be an effective torture device.
Gameplay
40
Controlling the portable water containers could not be much worse. The game has far too many trial and error elements relating to the unforgiving physics and general navigation imprecision. Some fish abilities are occasionally used well.
Single Player
40
Over 5-6 hours, there is no real story. Townsfolk say lame jokes or vocalize dumb memes, which is about as funny as drowning. Even the pacing and difficulty is inconsistent.
Multiplayer
NR
Performance
(Show PC Specs)
CPU: AMD Ryzen 5 3600
GPU: XFX RX 480 GTR Black 8GB
RAM: 16GB DDR4
OS: Windows 10 Pro 64-bit

55
Lots of errant stuttering when rotating the camera in new areas. Physics glitches are numerous.
Overall
43
As one of the most frustrating games ever made, I Am Fish is a special kind of awful. With horrible traversal, unforgiving physics, inconsistent challenge, and terrible stealth sections, it is about as fun as getting your head stuck in a fishbowl. 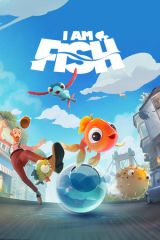