The toys are out of the box

One Christmas, many moons ago, I was obsessed with Hot Wheels. There was one particular set that I saw advertised every day on Cartoon Network which I was enamoured with. So much so, I asked Santa for that one set for Christmas. Come Christmas day and I got a Hot Wheels set, but not the one I asked for. This confused my young self as I thought Santa had an army of Elves make the toys but I didn't push the issue. The point here isn't my slow realisation that my family were deceiving me for years about a magical man who traverses the globe giving all the kids presents, but that I have always been a lover of Hot Wheels. 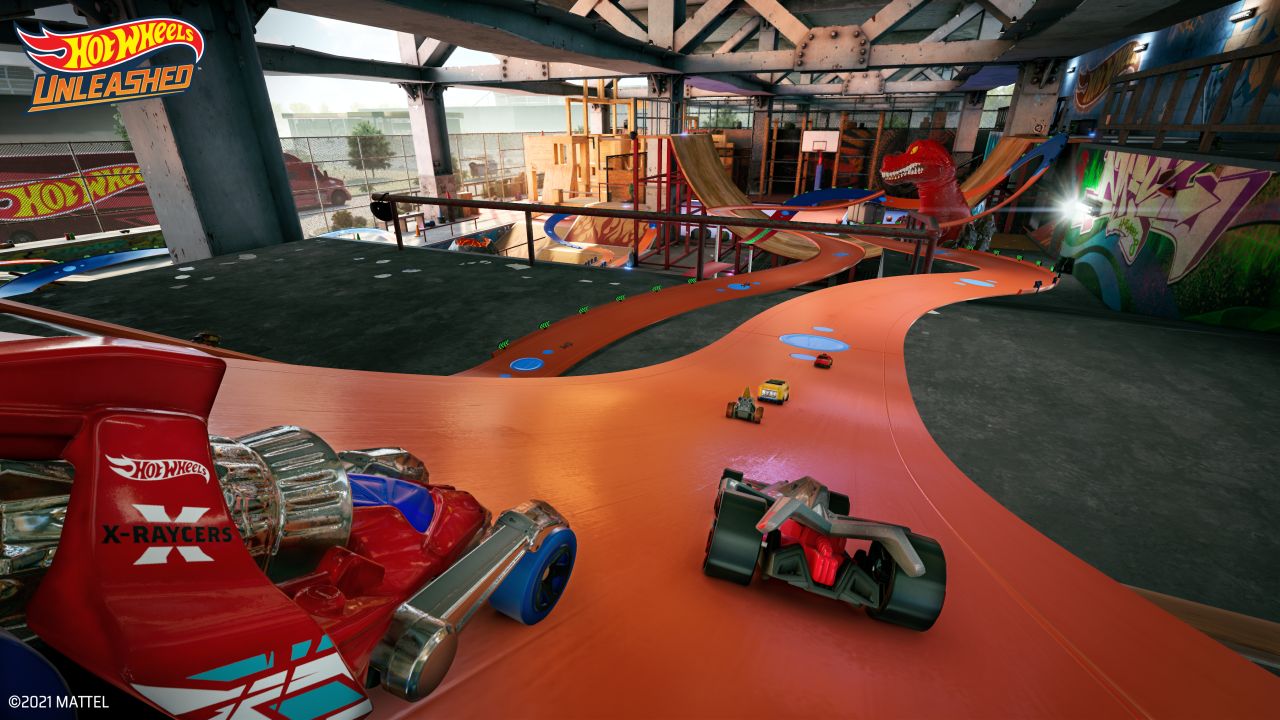 This is where Hot Wheels Unleashed comes in. In short, it is a simple 3D arcade racing game. If you've played any arcade racer, then it won't take you long to get to grips with. The gameplay is disarmingly simplistic with the only inputs you need being accelerate, brake and boost. On PC, it is a simple push of spacebar to start drifting. There are nuances to master as each car drifts differently and has a different boost level to manage but it doesn't take long to get to grips with it. Tracks also have shortcuts to make use of and, after several races, you can accurately pinpoint where they are thanks to handy game design. Just make a note of corners laid out by cones and air vents as you usually can't go wrong with those shortcuts.

The tracks themselves are varied in design. Most tracks usually have a loop-de-loop, jumps, off-track sections which are marked out by cones and occasionally a section of the track is upside down. Some tracks have all those variations, others might just have one, but it makes every track unique, and the longer courses add branching paths on top. This variation is much needed as there are only 6 stages that races can take place on, those being: Basement, Skate Park, Skyscraper, College Campus and Garage. This does mean that you will be seeing the same areas with only the track design keeping things varied.

That being said, it's incredibly easy to jump off the track or make a mistake which can lead to you having to respawn. If you make a mistake in a later stage of the race, then it's unlikely you'll reach a podium finish at all. So, expect to restart in your first few races until the game starts to click. Luckily, the races and time attacks are short so you won't be forced to replay long tracks. This doesn't apply to boss races, which are the longest races in the game, but you usually have time to make up for a mishap instead. The rubber banding is also noticeable and leaves car stats useless. I got a Koenigsegg which had the highest stats for acceleration and speed and I still watched cars pull away from me like I was driving a lorry. Obviously, this keeps every race competitive but it does mean that you have to make smart use of shortcuts and your boost. 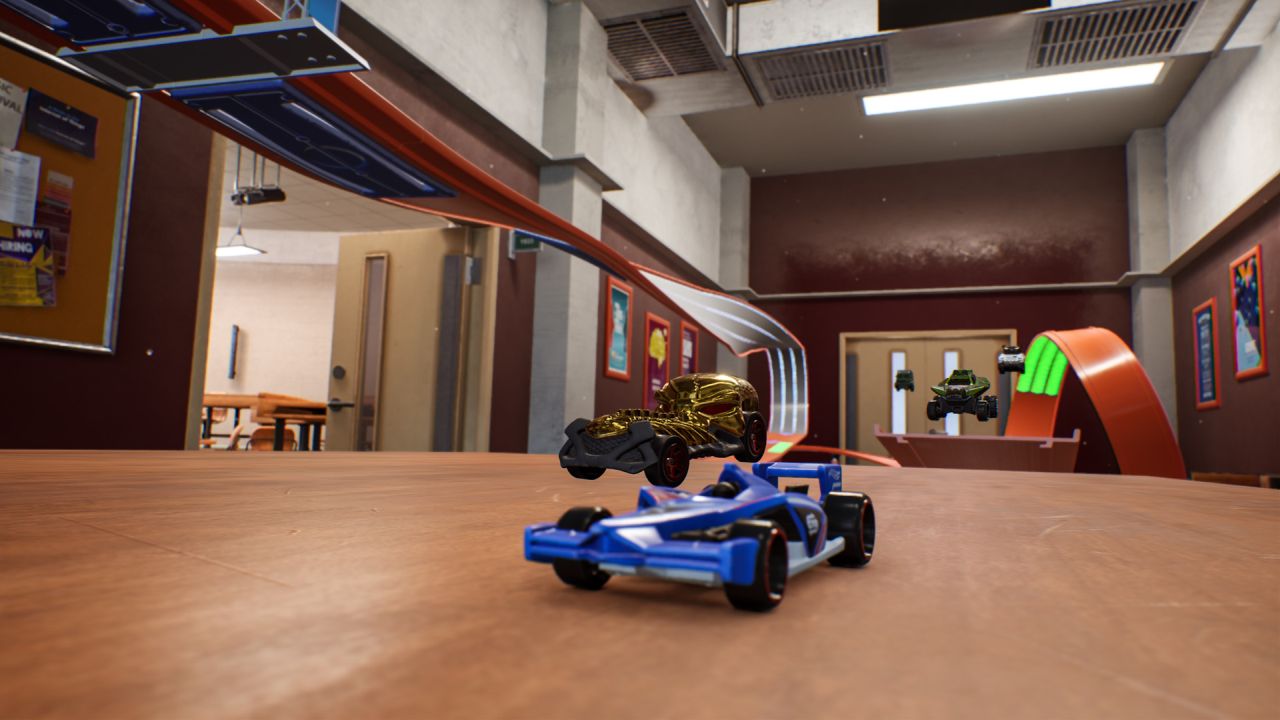 The single player takes the form of the City Rumble mode. It has about 50 quick races, 30 time attacks, 5 boss races and some secret races to complete which are spread out on a city map. The paths can be opened up by completing events and the goal is to finish every event on the map. The boss races are a notable highlight with them being a full length, 3 lap race, so you won't be finished within a couple of minutes. They're exhilarating and kept me on the edge of my seat the entire time. The secret races can be unlocked by completing certain events on the City Rumble map which awards the event or a car to meet the race requirements. Despite being secret, they offer nothing new and are just normal races with extra steps to unlock.

The game itself seems quite bare bones with little variety in races. You have quick races, time attacks, boss races and secret races, which doesn't add anything new to the race format. There really could have been a wider variety of events such as eliminations and even destruction derbies to change things up. The thought of destroying toy cars, Burnout style, feels like a missed opportunity. I also noticed an occasional issue with time attacks where it didn't register that I completed a lap and reset my time when I crossed the finish line. Luckily, time attacks are usually under a minute in length.

Now the way you unlock cars is through loot boxes. This conjures up a worrying impression that the game contains microtransactions. With two forms of currency, it would be a safe assumption you can buy those loot boxes with real money, but the good news is that no option like that exists. Both forms of currency are earned through races, as well as being able to get loot boxes outright at certain points on the City Rumble map. Each currency is earned at a reasonable rate and can be gained by selling or scrapping cars in your collection. This is usually a good idea as it allows you to upgrade your better cars using the “scrap” currency, and you can use the coins to unlock more loot boxes. This does lose importance once you've found a car you've clicked with but it is satisfying to have a healthy collection. There are 60 cars to collect, ranging from Hot Wheel Hot Rods to licensed cars such as Fords and Audis. 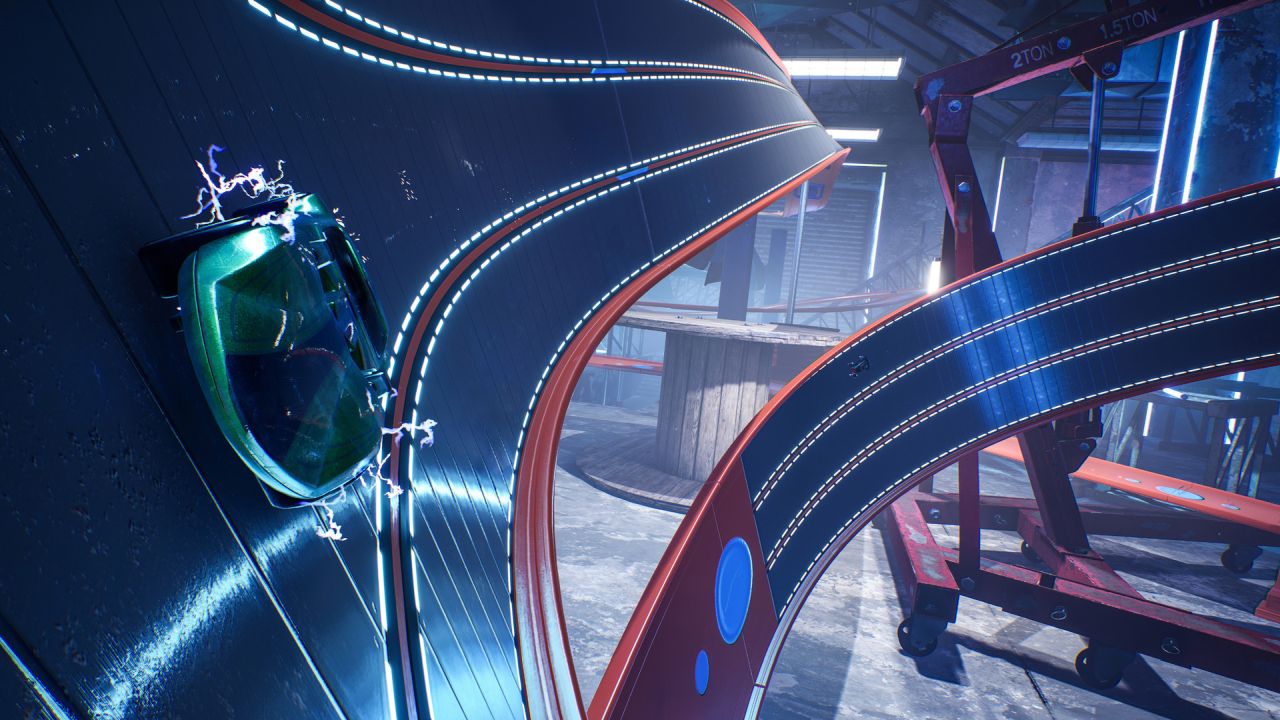 On top of car collection, there is a good amount of customisation. This includes customising the liveries of your car to a full-blown track editor. You can also customise your basement, but I've found no reason or incentive to do so and it is redundant as the basement isn't used in gameplay. However, enough cannot be said for the fantastic track editor. The tools are easy to grasp and intuitive and it's always fun to let your imagination run amok and create some truly bizarre tracks and share them online or play them with your friends in split-screen.

As with any good arcade racer, there is a multiplayer option, both online and local, but the split-screen is limited to 2 people only. There is an element of joy with racing superfast toy cars against each other on a classic orange hot wheels track. However, multiplayer is as bare bones as the single player, with quick races and time attacks being the only two options. Certain modes like a Grand Prix would have been a no-brainer in a game like this. It really hurts the replayability of the game and even playing with friends can't stop the two game modes from getting boring.

Hot Wheels Unleashed looks incredible, especially in 4K. Each car is incredibly detailed and show signs of wear and tear throughout a race. Even the little details are mind boggling, such as seeing a fingerprint on the windscreen like a toy car in real life. The track decals look like stickers and the six environments you race in are just as stunning. This is paired with great audio design. The audio and music muffle when you go upside down, as if blood rushes to your head, and it speeds up when you boost. It helps immerse you and gives you a real sense of being in a fast-paced race. On top of this, Hot Wheels Unleashed plays incredibly smoothly, which is pivotal in a racing game. The only noticeable performance issue was some texture pop in during the pre-race panning shots over the track. Besides that blemish, the frame rate is smooth, even during more frantic periods of a race. 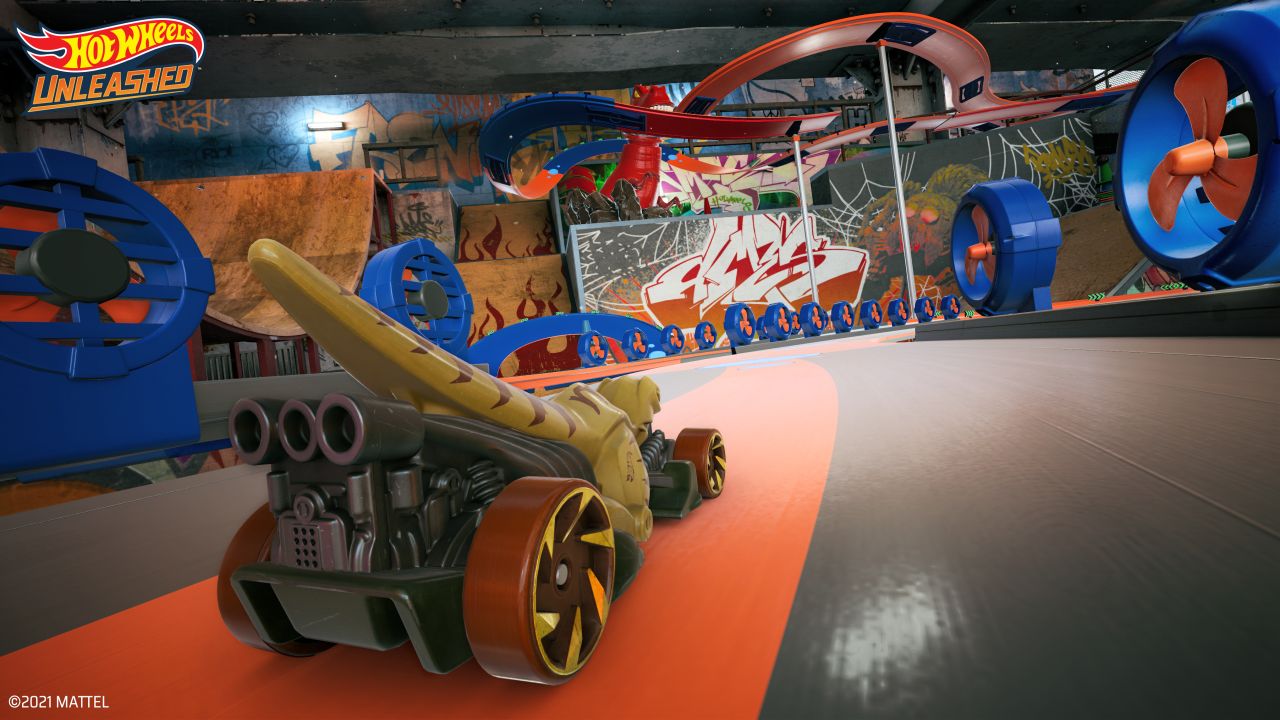 Hot Wheels Unleashed is a fun arcade racer. It is deceptively simple but the joy of drifting round corners, boosting off jumps and doing loop-de-loops never gets old. Unfortunately, there isn't a greater variety of game modes which hurts the overall experience as races and time-attacks do lose their shine after your 50th go. Besides that, Hot Wheels Unleashed is one of the most gorgeous games I've played in recent memory and there are so many tiny details which show just how much care and attention Milestone put into this game.

80
Some texture pop in at the start of some events is noticeable but usually the performance is good.
Overall
78
Hot Wheels Unleashed is an enjoyable arcade racer with deep customization and great presentation, let down by a lack of modes to play. 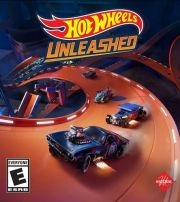