A movie adaptation without the movie

Having played, and suffered, through many film-to-game adaptations, fans can be rightfully jaded by this corner of the market. Taking something that works on screen, in a non-interactive medium, just doesn't usually translate into a worthwhile game. Even if you sprinkle the high quality clips from the movie, it can still come off as soulless and uninvolving. But Kena: Bridge of Spirits turns everything on its head. It's an original game, not based on any movie or existing property – and it manages to offer a story and presentation quality that's on par, and perhaps better than, some actual animated films out there. And while it doesn't suffer as poorly as usual with its gameplay, it still leaves much to be desired, and can't break the curse that it doesn't even quality for. 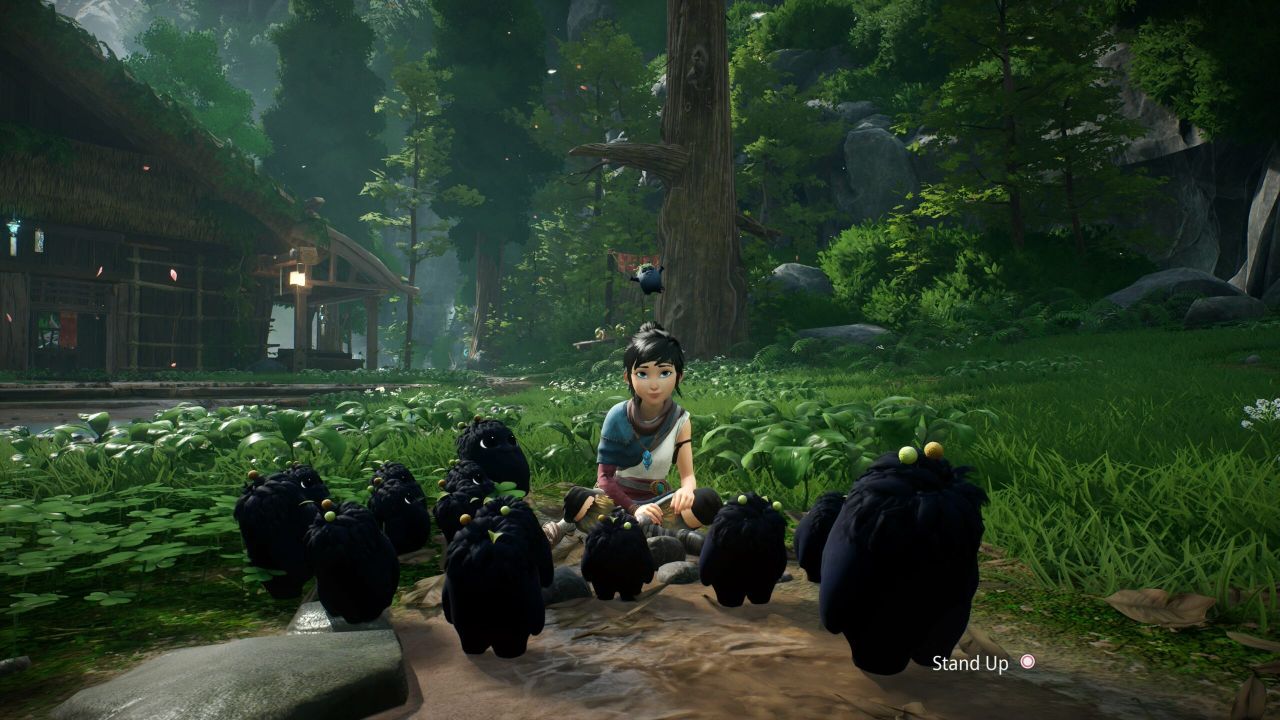 The title follows Kena, a young woman who is searching for a way to reach a sacred mountain shrine. She arrives at the foot of the mountain, to find a village that has been seemingly devastated by a dark corrupting force. All the residents are gone, and everything is overgrown by deadly red vines. However, it's not as empty as it seems – Kena soon encounters two young spirits who promise to show her the path if she helps them first. Kena can see these spirits – as well as all other characters – because she is a Spirit Guide, a role tasked with helping spirits move on. She sets out to the forest near the village to help find their brother, and encounter some other spirits along the way.

While the narrative starts off fairly simply, and does unravel fairly predictably and using a repeating structure (help some spirits before moving on), it nonetheless manages to showcase some emotional and memorable scenes. After all, despite its charming presentation, the game deals with some heavy subject matter below the surface – all these spirits are of people who perished in the corruption event, kids included. But with Kena's charming personality and yet also having the strength to fight the enemies she comes across, she makes for a great central character, despite saying little. Most of the dialogue comes from the spirits she meets, who tell her of their life before, and what they experienced during the event, as well as why they can't move on. In each new area, you get a glimpse of what happened, and at the end you get the full story, which usually feels rewarding.

The reason that the game feels so charming is thanks to its very strong presentation. The pre-rendered cutscenes are incredibly well done, especially for a smaller budget title. You would be forgiven to forget that you’re playing a game, and could instead think it's an animated feature film. The sort of cutscene quality would usually be seen in the movie-to-game adaptations that just use the clips from the film, but here you get an original and excellently presented variety of scenes. It wouldn't be amiss to compare the game to the likes of Disney's Pixar or another major animation studio, which is a huge compliment to the quality of the art. From the character designs to the animations and voice acting, the cutscenes are excellent and single handedly elevate the experience. 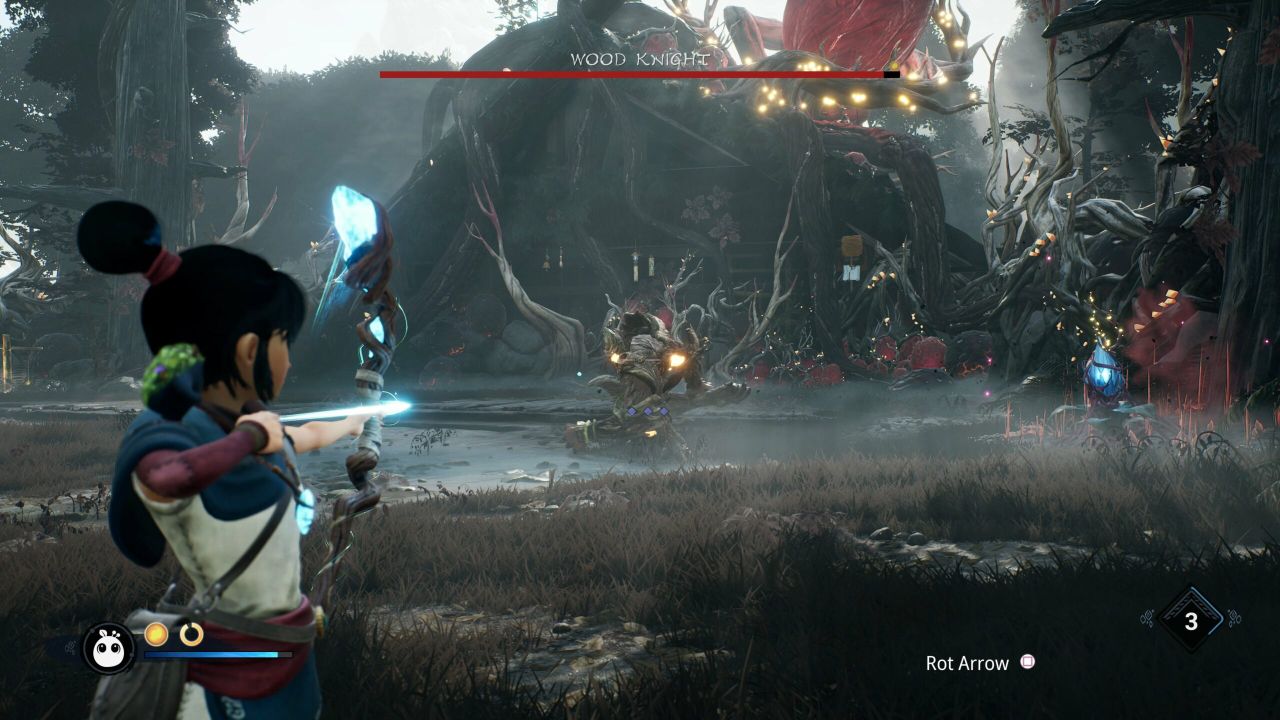 In-game visuals are not too shabby either, though of course they can't reach the pure technical quality of the pre-rendered stuff. The village and surrounding forest you'll get to explore are full of greenery, lush plants, and some more barren corrupted areas. The character designs of Kena and spirits are reminiscent of animated films, as are the Rot. Strangely named, The Rot are little creatures that Kena will collect over the course of her journey, and can be used in combat and exploration. These small, puffy and overly happy creatures try to overload the cuteness factor, and could have done so if there was more interaction and close-up opportunities with them.

From the unexpected highs reached by the presentation, things unfortunately go downhill once it comes to the gameplay. Bridge of Spirits is a 3D action-adventure game that uses many familiar cookie-cutter elements, and implements them without much flair. You'll run through a linear adventure, with occasional backtracking and side-paths, interchangeably exploring and fighting. The playable areas are very small and there's no mistaking the game's limited scope. The movement feels a little stiff, as you run, jump, and occasionally climb marked cliffs.

In exploration, you will never be in doubt of where to go next. The campaign progresses linearly, so only a single path is open when you first arrive at the village. And as you go complete that area, the next one will open up, and so on. It's a very predictable and by-the-numbers design – as you enter a new area, you again have to complete /collect a certain amount of something in order to unlock the next door, and so on. Climbing is simple and fairly robotic, without much possibility of failure. On occasion, you may have to command the Rot to move a rock for you so you can reach a higher platform; or use your bow to shoot at a glowing flower which pulls you towards it. There are some slightly larger areas, which may have a few sub-objectives to tackle in any order, but it's still a far cry from freeform exploration. 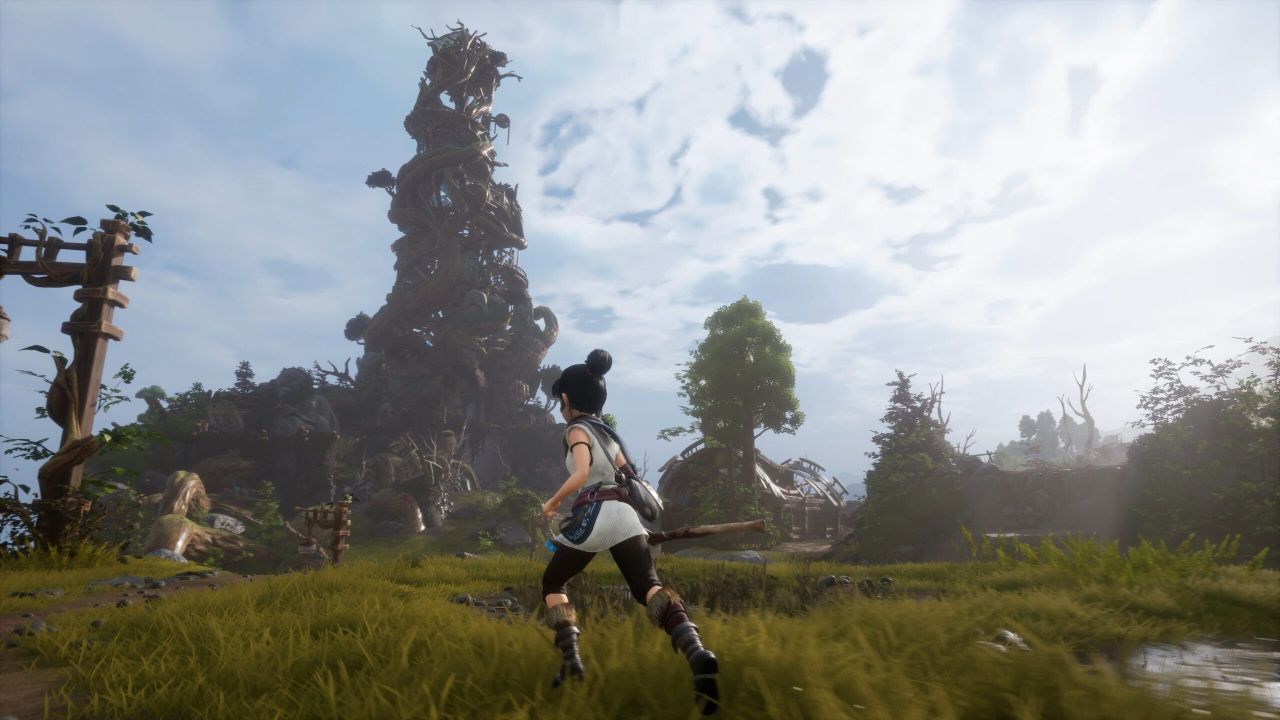 When not climbing or running through the forest, you may need to pause to solve a puzzle. These are usually quite straightforward, such as again having your Rot relocate a rock from one place to another, or shooting glowing spots in the right order to create a pulse that reaches the central crystal in a shrine. They will pause your progress for a few moments, but on the whole the exploration and puzzles are in line with the game's presentation – something that seems to be aimed towards a somewhat younger audience.

But Kena's hopes of reaching the shrine and helping spirits aren't uncontested. The corruption that initially destroyed the village is still all around, while you have the ability to clear it, it also spawns evil spirits that stand in your way. In combat areas, enemies range from simple, small melee foes all the way to huge boss battles. Regular combat areas are fairly easy on normal difficulty – you have a dodge, a light and heavy attack, and a bow with limited but gradually replenishing ammo. Hacking away at foes is simple, and you can even use the little Rot guys to attack/stun an enemy, letting you land some free hits. The foes are mostly all melee, though some ranged flying enemies show up. Like movement, the combat feels a little stiff, but it's functional, and using your limited shield field to block/counter also comes in handy.

The issues with combat crop up during boss battles – some are entertaining and slightly creative, as the big enemy changes up their pattern, making you dodge, use your bow, the Rot, and everything in your disposal. But for the boss battles that are straight up simple fights against a big enemy, Bridge of Spirits suffers from a difficulty spike. These large enemy fights suddenly require extreme concentration, and the bosses themselves have very far reaching attacks and combos. It suddenly becomes a Souls-like, to the detriment of the otherwise leisurely experience. There are three difficulty settings, and playing on Normal makes these difficulty spikes stand out. 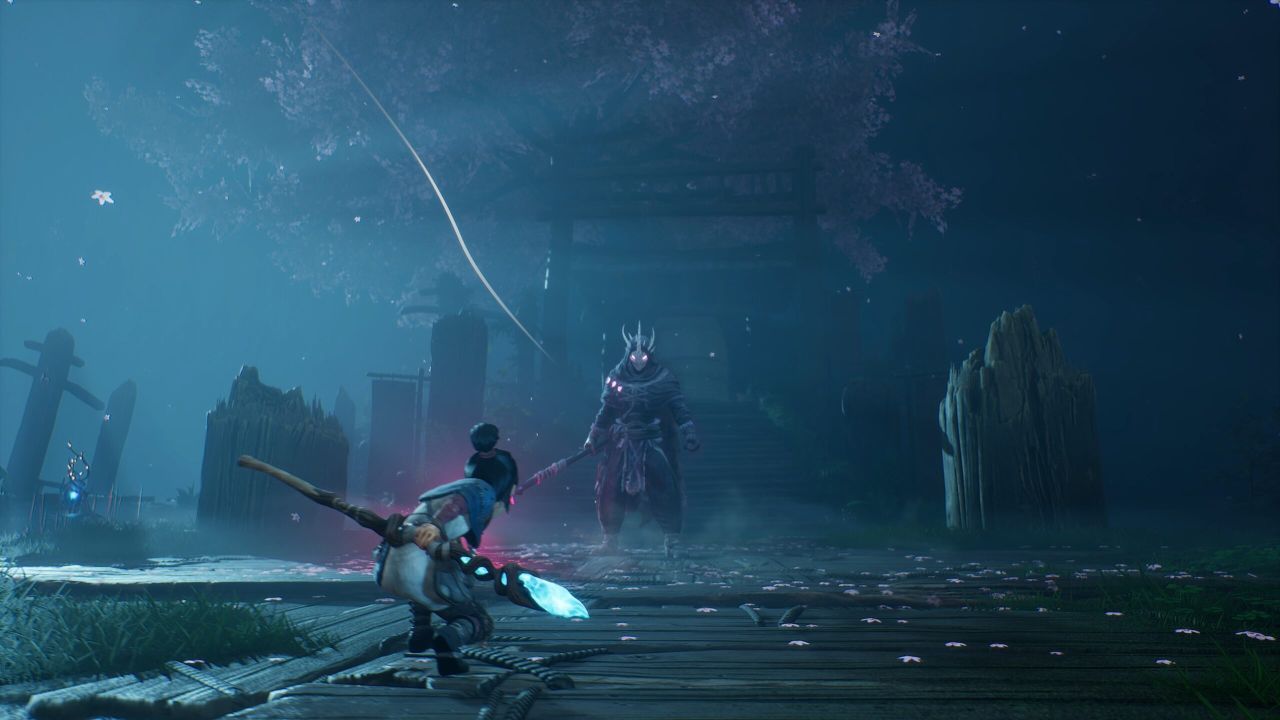 When you're not in combat, in a cutscene, or running around, you can look for collectibles, as well as the Rot. The Rot (a name that still makes little sense) are little guys that follow you around, comparably to the Pikmin. They are basically an AI element in all your activities – in combat you can direct them to stun an enemy, as mentioned, and in exploration they can move objects for you, as Kena seemingly cannot interact with the world herself. Finding new little Rot creatures is how you expand their numbers and increase your Level. Having more Rot increases how many actions they can perform, and alongside the experience-type currency that you collect, you can improve Kena's effectiveness in combat by unlocking a few new attacks and abilities. There's not a big skill tree to work through, as the game's appropriate 6-8 hour runtime helps it keep a consistent pace. The Rot also have a function/ability to transform into a sort of snake dragon (only from certain spots, and for a limited time) that can be guided around and used to clear the corruption blocking your path. The controls here use both thumbsticks, and so a controller is highly recommended instead of keyboard/mouse. It's a bit awkward even with the controller, and the camera can be wonky, but there is target lock-on available which is helpful during boss fights.

The Rot creatures can help you accomplish many optional activities, such as fixing fallen over statues, or carrying them to their appropriate spot. You can also run around to find chests/containers for more experience and more customization currency. This currency can be spent at the shop to equip hats on the Rot that you've unlocked, making them cuter, if you can handle it. Sometimes reaching those loot containers/chests requires a bit of extra platforming off the beaten path, or completing a challenge such as defeating incoming enemies within a time limit.

The title seems fairly well optimized on PC, with a variety of visual quality options, framerate limiter, and so on. You can even choose a PlayStation or Xbox controller button layout to be shown in-game. The performance is solid, given the modest system requirements, and the game manages to hold a steady framerate. It's not an overly effects-heavy game, instead relying on its art and a few good particle effects to carry the presentation, led by its pre-rendered (and thus non-taxing) cutscenes.

In learning a bit more about the game before its release, we found that Kena: Bridge of Spirits was showcased at the 2021 Tribeca Film Festival. And that little factoid describes this game to a tee. It's a title that offers high quality presentation, led by its cutscenes as well as strong art style in-game. The story is touching and voice acting is nuanced. But beyond that, the actual gameplay is painfully plain – the sort of predictable and arguably dated design that would wow film fans as a complimentary component to the experience. But for players, the gameplay design ranks much higher on the priority list, and so it's hard not to be a little disappointed. Kena: Bridge of Spirits is an incredibly strong debut for the writers and animation team at Ember Lab, but their game designers played it too safe to make the title stand out.

Our ratings for Kena: Bridge of the Spirits on PC out of 100 (Ratings FAQ)
Presentation
90
Some of the best looking cutscenes of the year, thanks to great animation and art. Gives Blizzard a run for their money. In-game art is also nice, as is the soundtrack.
Gameplay
60
Fairly stiff movement and animations are a sharp change from the height of the cutscene quality. The basics are all there - firm combat to platforming and simple puzzles, but it all feels quite derivative. Boss battles produce occasional difficulty spikes.
Single Player
70
The campaign design is very by the numbers, with your tasks being very predictable in each area. Narrative is equally straightforward, though it delves into some interesting subjects.
Multiplayer
NR
None
Performance
(Show PC Specs)
CPU: AMD Ryzen 5 3600
GPU: ASUS Radeon RX 580 8GB
RAM: 16GB DDR4
OS: Windows 10 Pro 64-bit

85
No issues, with a decent number of visual options and controller support.
Overall
71
Kena: Bridge of Spirits is a title of high artistic value, but one that stumbles in gameplay. It's got charming characters and setting, a decent story and great looking cutscenes, but actually playing through the experience is largely underwhelming.

Kena: Bridge of the Spirits 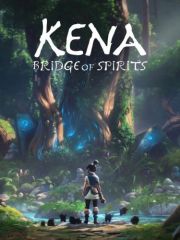 All videos for Kena: Bridge of the Spirits (2)
Advertisement ▼