It is fair to say that I am a massive fan of the Ace Attorney series. Ever since I played the original trilogy, I have been in love with the characters and their world. I’ve even played the fan translation of Miles Edgeworth Investigations 2, which I recommend. Despite this, the only games I hadn’t played, until now, were the Great Ace Attorney games. Thankfully, Capcom have decided to localise both games and package them as The Great Ace Attorney Chronicles for those of us in the West. 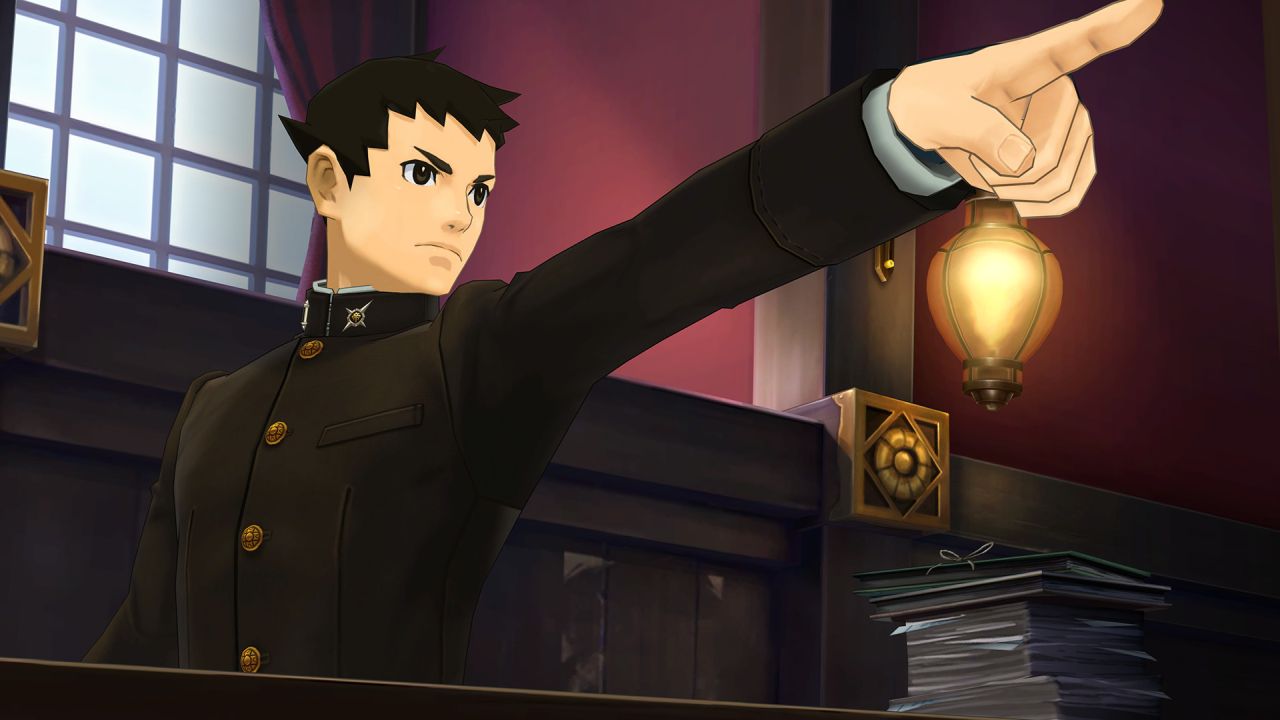 The Great Ace Attorney Chronicles is a collection of both Great Ace Attorney games; Adventures and Resolve. The protagonist is Ryunosuke Naruhodo, the ancestor of the spiky haired face of the franchise, Phoenix Wright. Chronicles is unique in the franchise in that the characters are actually Japanese with some parts of the game taking part in Meiji era Japan. This means there is no setting that’s a hybrid of Japan and California which the other games appear to be set in.

The strength of any Ace Attorney game is in the writing and characters. There’s a reason why Phoenix and friends are widely beloved and The Great Ace Attorney carries on this tradition. Ryunosuke starts off as a timid student, but eventually grows to be a confident defense lawyer, which is shown not just through the writing, but the animations and sound design. When Ryunosuke is nervous he slaps the bench with a tame sound, but when he’s confident then you get a full slam. On top of this, there is the usual cast of wacky characters such as Herlock Sholmes, named so for legal reasons of all things, Iris Wilson and characters with pun names. My favourite being Bif Strogenov, a burly Russian sailor.

The stories of both games are intertwined with a focus on the changing of Japan and the influence of Great Britain on the international stage. This is an overarching theme with a more personal story being told about individual goals and vendettas. There are plenty dramatic twists and turns which you come to expect from Ace Attorney. That is as much as I want to say for fear of spoiling the games, as any Ace Attorney twist is best experienced by going in blind. 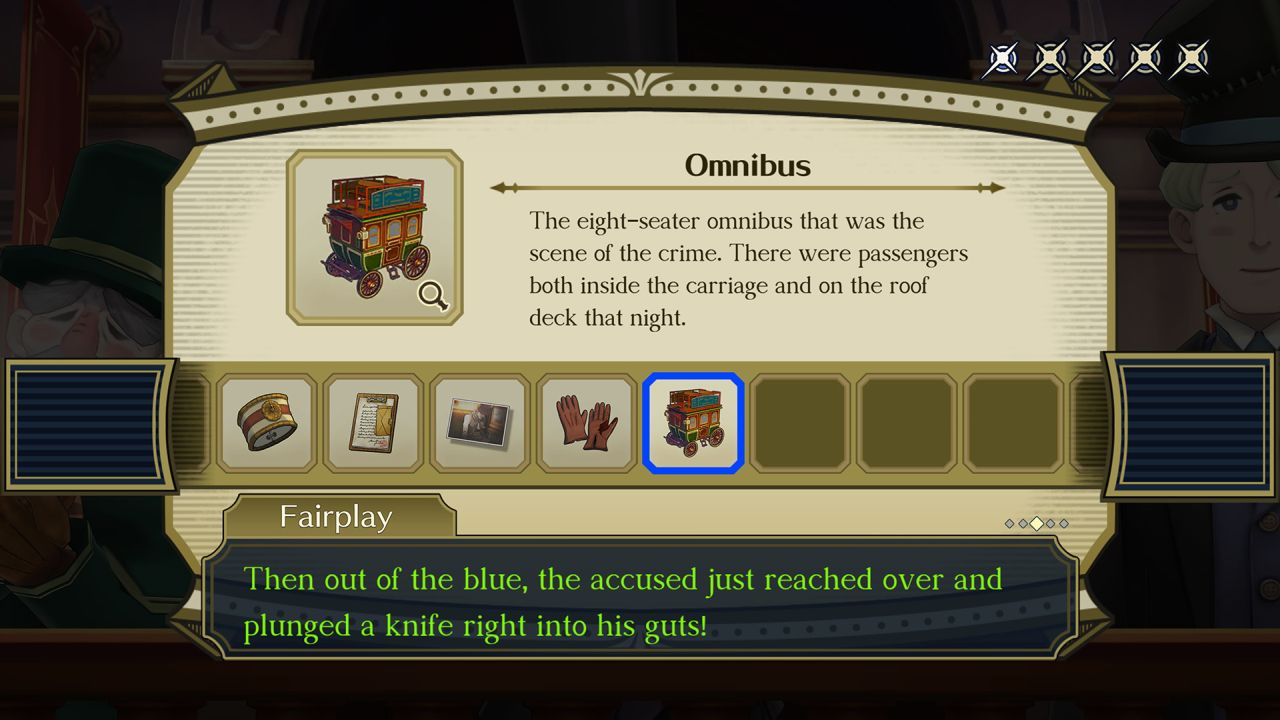 While it is obvious that no one should use any Ace Attorney game as legal research, The Great Ace Attorney Chronicles should also not be used for historical research. It wouldn’t be obvious to the average player; it is fun to point out the historical inaccuracies such as the UK Supreme Court didn’t exist by that name in Victorian Britain. It was actually named the House of Lords prior to 2009. However, these are minor gripes which won’t bother most people.

The basic gameplay routine of Ace Attorney hasn’t changed. Cases still involve investigations and a trial with some twists. Once you hit London, trials have a new mechanic with the jury. During the course of the trial, each member of the jury will make their decisions known and come down on the side of guilty or not guilty. When all members of the jury decide the defendant is guilty, you enter a new phase of the trial called jury summation. At this point, you compare the jurors' reasons for deciding guilty and you pick out the statements that contradict each other to change their mind.

On top of that, investigations have an addition as well. When investigating with Herlock Sholmes, he will make deductions about the case. Unlike his namesake, he is usually wrong. This is where you get the chance to analyse the scene and correct his deductions to arrive at the truth. The answers to this are usually signposted by the person being analysed showing signs of confusion at the appropriate point. When it comes to make corrections, the game takes you to the appropriate statement and highlights what was wrong about Sholmes’ deduction. You don’t have to select the right statement like in cross examination. It eliminates any real sense of puzzle solving when the game holds your hand to the right answer. 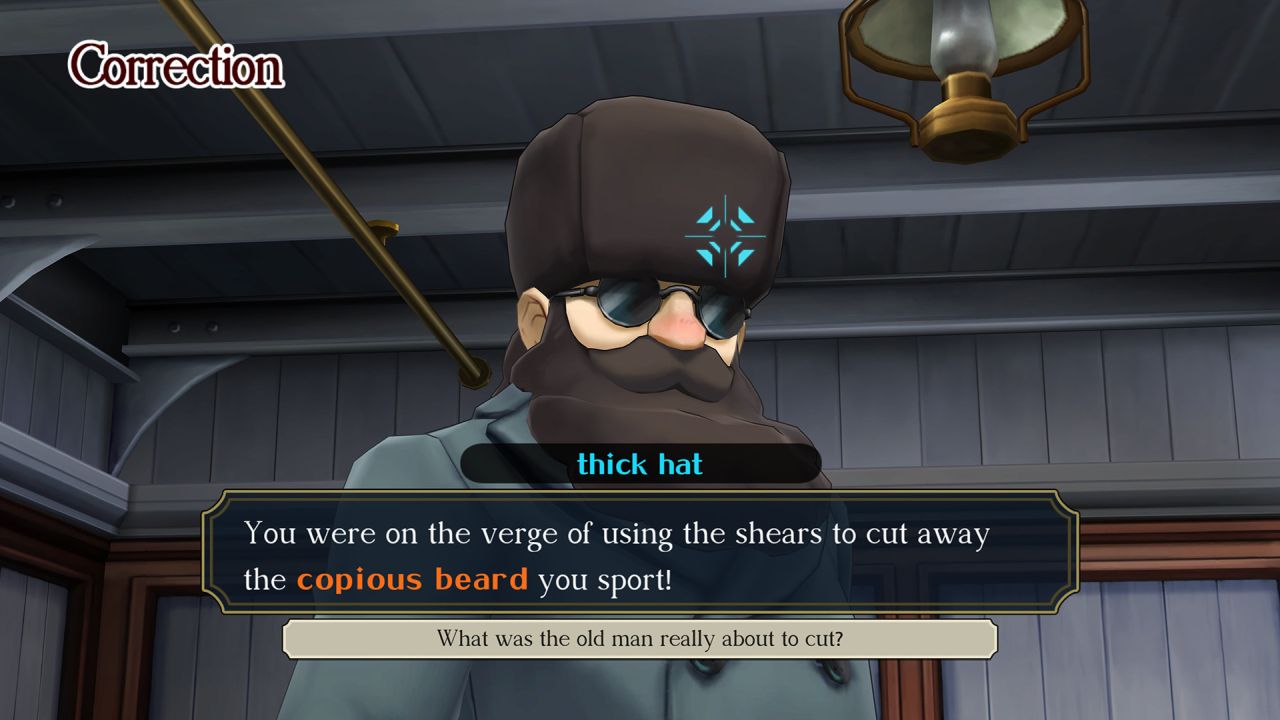 This issue is also prevalent when cross examining multiple witnesses. Previous Ace Attorney games had you question each witness individually, whereas now, multiple witnesses can be on the stand at once. When you press the correct statement, eventually one of the other witnesses will react to something they know to be untrue. The only problem is that this gets shown through an exclamation mark on screen and an icon showing you the exact witness who responded, and all you have to do is select them and “pursue” them. This mechanic could’ve been used more effectively by watching each witness for body language and any tells before pursuing them, but instead the game makes it as simple as possible by literally telling you the answer.

My main issue here is that there is no puzzle solving. You don’t have to analyse each witness and use logic; the game holds your hand and points you to the correct answer. This takes away any sense of real accomplishment at finding the answer because you don’t really have to do anything. The Great Ace Attorney also allows you to turn off any player agency whatsoever. There is a new story mode setting which makes the game a visual novel and autoplays for you, meaning you don’t investigate, cross examine or present any evidence. It also means you miss out on side conversations which can be hilarious. Playing this way isn’t really the way to experience Ace Attorney and it does a disservice to the game as a whole.

This handholding is paired with issues on the other side of the spectrum that have been present throughout the Ace Attorney series. There are plenty of leaps of logic that can be hard to follow throughout a trial. On top of this, there are instances where it can take too long for Ryunosuke to reach a logical conclusion you already discovered 10 minutes ago. All of this stems from the game being rigid with players having to pass through hoops just to make a point you figured out beforehand. If you’ve played the series before, it can be easy to figure out what you have to do at trial, but this may be difficult for a newer player to discern. 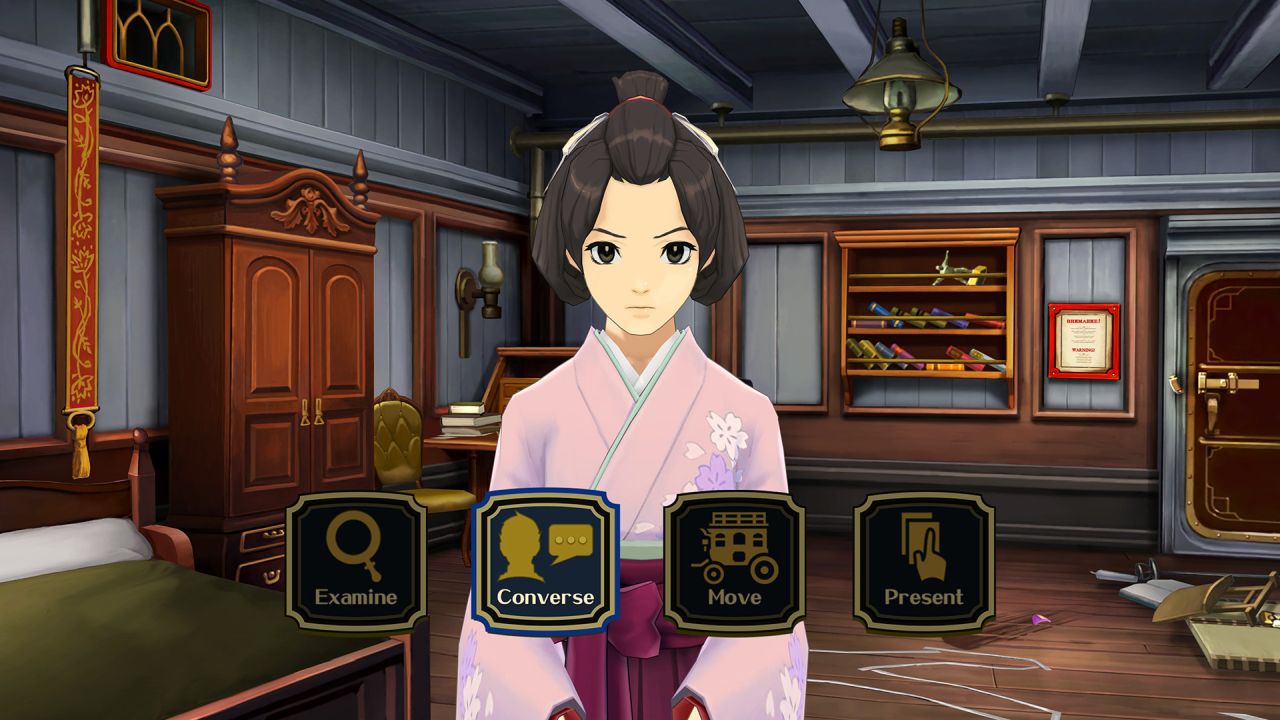 One of The Great Ace Attorney’s biggest strengths is its presentation. The art style is visually diverse with a varied colour palette and it looks particularly crisp in 4K. The art design is particularly excellent with locations ranging from small cabins to grand offices which have clearly had a lot of love and attention put into them. Praise also has to be given to the anime style cutscenes which are an absolute treat to watch and are never dull.

The music is also one of the aspects of any Ace Attorney game I look forward to most, with every game having at least one certified banger on the soundtrack. The soundtrack has come a long way from the bit sounding songs of the original trilogy with a more orchestral score. The songs are almost as important as the writing with some tracks perfectly encapsulating the characters they accompany.

The Great Ace Attorney Chronicles is more of the same in the Ace Attorney franchise. The usual cycle of investigations and trials are still present as well as whacky characters and a story that twists and turns over two games. There are some new gameplay mechanics including jury summation and deduction correction but there is a strange combination of hand holding with the new mechanics. This is on top of the same problems with the series such as hard to follow logic and the rigid system which forces you to pass through hoops to progress. Due to this, Ace Attorney is unlikely to win over detractors, but for fans of the series, this is a great addition to the canon.

Our ratings for The Great Ace Attorney Chronicles on PlayStation 4 out of 100 (Ratings FAQ)
Presentation
85
Crisp visuals and brilliant design means that every inch is packed with detail and great to look at. Sound design is also used effectively and even helps aid character development.
Gameplay
62
The usual gameplay routine of the series is present with cases being a mixture of point and click investigations with trials. New mechanics do away with puzzle solving and literally give the answers to the player.
Single Player
82
Chronicles comes with the weird and wonderful cast of character you come to expect. The plot takes many twists and turns and is one of the strongest aspects.
Multiplayer
NR
None
Performance
85
No issues noticed, with the frame rate holding up on PS5 with PS4 backwards compatibility mode.
Overall
74
The Great Ace Attorney Chronicles has great characters, visuals and an intriguing plot, but the new mechanics offer no challenge or player engagement, making this a solid entry for returning fans but offering little to entice newcomers. 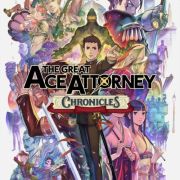