Slick like Bogart, but the end rips it all apart

When writing a story, certain guidelines can be followed or ignored. One guideline is that the introduction is a promise of what to expect. It sets the tone, characters, pacing, objective, challenges, and many other subtleties. To see if a story has gone off the rails, just look back at the intro and compare. Backbone is a game that completely ignores this guideline to its great detriment. This dialogue simulator/adventure game loses its identity in the back third, and the ending is incomplete and unsatisfactory. This story collapse is even more of a shame given the fantastic art style and interesting beginning. 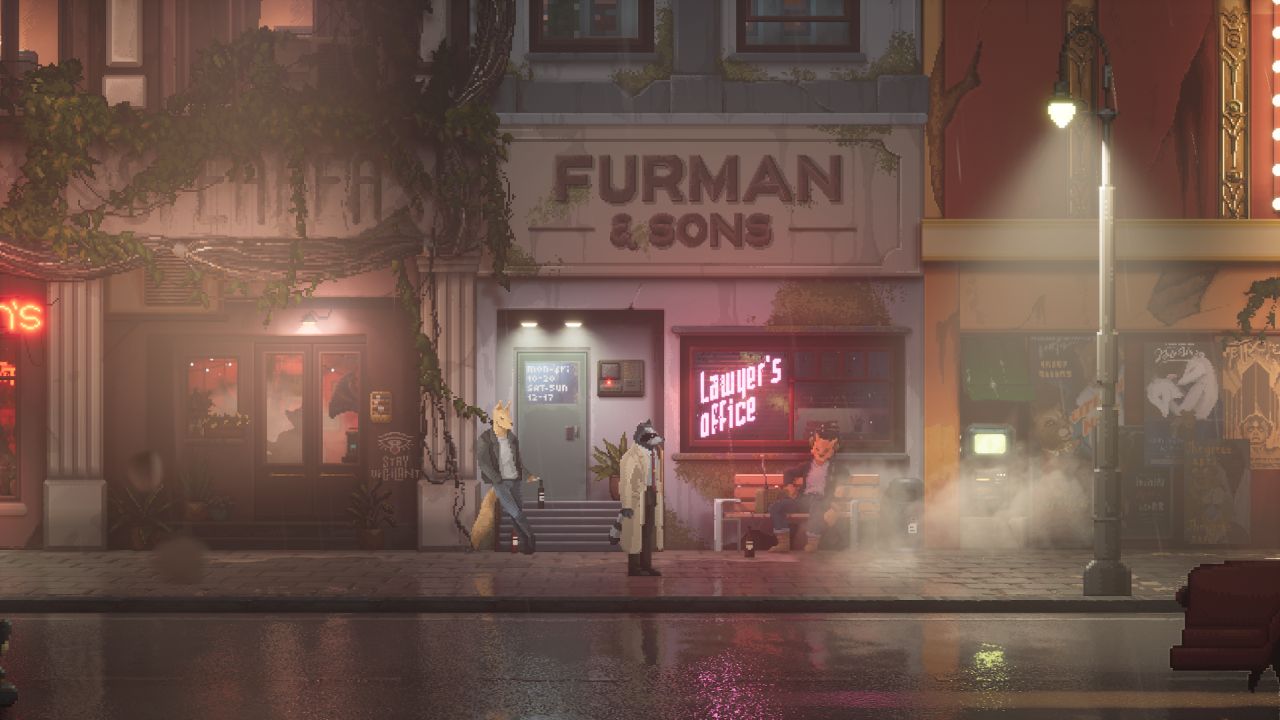 Backbone starts like any good story, with a raccoon in a bathtub. Howard Lotor is that raccoon and he’s also a private detective. After a quick wash, a client comes to see Howard to ask him to find dirt on her cheating husband. In this introduction, the tone of film noir is set and delivered with impeccable precision. As Howard, you travel the streets, talk to characters about the husband and where he might be found. Eventually this leads to a jazz bar and a conspiracy that makes a cheating husband seem like small potatoes. So far, so good; the conspiracy angle is not as neat as a personal story but it fits well enough with the setting.

When stumbling into the conspiracy, Howard meets a lady fox named Renee. She’s an investigative reporter with dark views about the owner of the jazz bar who has a scary ability to make problems go away. Despite the danger, both Howard and Renee are driven to find answers and see how high the conspiracy goes. They work well together and the dialogue between them is fun and smart.

Most of the information-gathering process involves talking to characters. Backbone is primarily a dialogue simulator with players able to choose from around three responses each time. None of the dialogue is voiced but the writing is good because of humor and concise delivery. Howard can reveal he is a PI or pretend to be somebody else. He can also ask kindly about a character’s personal life or threaten them with violence. This feels true to the private detective role since most conversations are about prying loose the facts. But the options in dialogue have no impact on the outcome. This linear adventure will always find a way to provide the right information (or give Howard access to someplace) no matter how you approach things. Although you might miss a few side conversations across the four hour journey, there is no way to fail or change what happens. 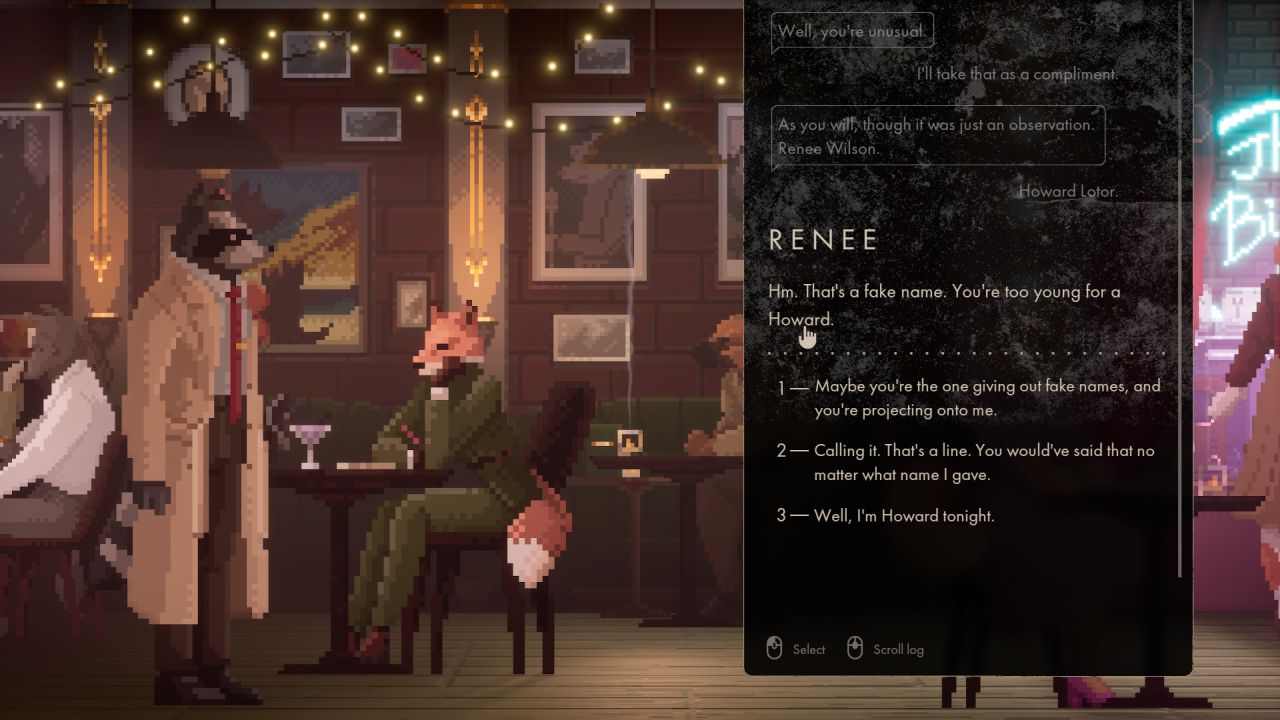 When not talking, Howard is moving across the 2D world and interacting with things. Sadly, this is not a classic adventure game where items are collected, combined, used, and puzzles are solved. Rather it is more about interacting with everything on screen until something allows progress. One of the most complex interactions involved accessing the personal computer of a missing person. But all this meant was moving around a few rooms and pressing the interact button until there was nothing left. There is a stealth component in the game, where Howard crouches passed guards. This is used poorly three times and represents how the game often forgets to include enough gameplay.

As mentioned, the story takes a turn about two-thirds of the way through for no good reason. Okay, there is one good reason. Straight after the terrible sci-fi twist that nobody wanted, there is an excellent night-time procession scene with a creepy vibe and subliminal messaging. But this is the only positive of a narrative shift that destroys so much. The adventure becomes too linear. It also starts pushing a particular philosophy with forced dialogue. And there are loose ends all over the place. The cheating husband case concludes, but not in a fulfilling way. The conspiracy is not fully revealed and does not make sense. Renee and Howard’s interactions are abruptly cut short right when they were getting good. No justice is done for any crime that takes place. It is like a different story was tacked onto the end and the result is a catastrophic implosion of the narrative.

To see the story fall so far is such a pity, given the stellar presentation. Backbone uses pixel art so well with cool anthropomorphic animals and intricate detail. It also blends more traditional graphics by putting these pixelated characters onto 3D surfaces. This allows for reflections, lights, and shadows to make the whole design so much more appealing. Also impressive is the music. It fits into the noir genre extremely well with piano tinkling and infrequent cymbals. Some brilliant vocals were also provided by Arooj Aftab in a few melancholy tunes. Even though the story changes direction, the music does keep up with darker, desolate themes. The game definitely oozes style from start to finish. 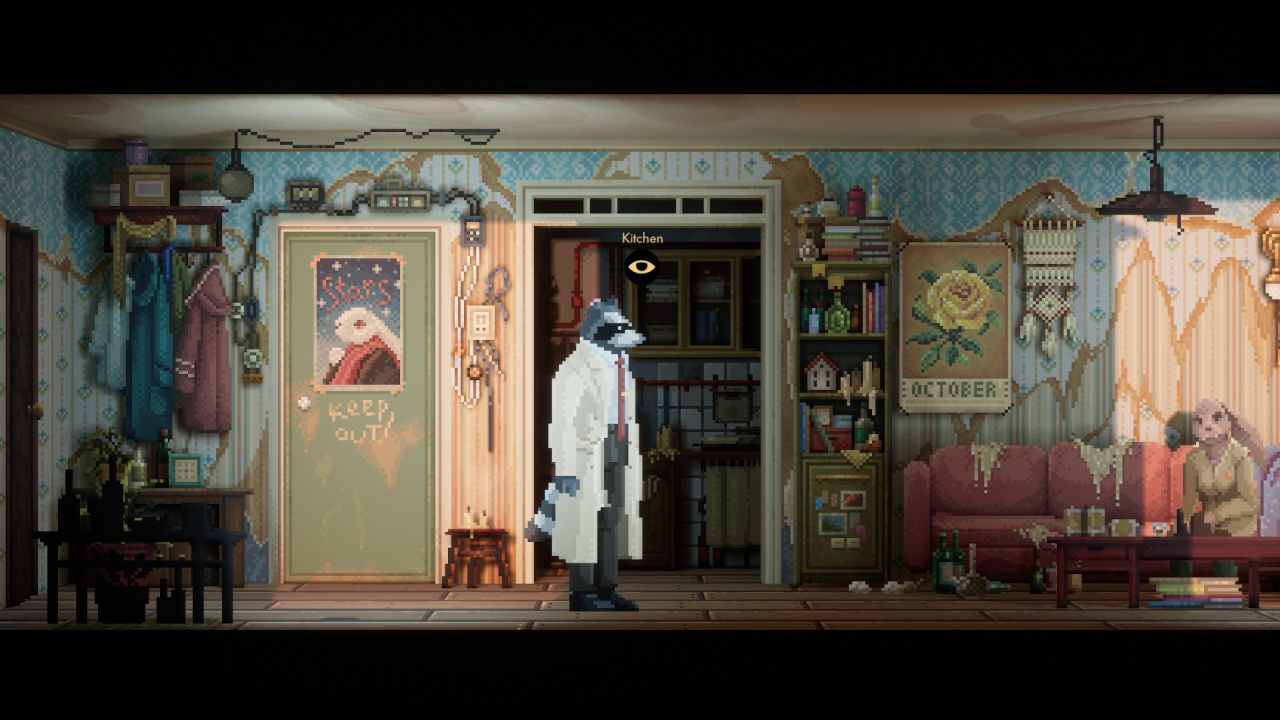 If the story in Backbone remained as consistent as its presentation, it would have been a good adventure game. What starts out as a nice detective tale crumbles into an unconvincing sci-fi mess by the end. While the dialogue in conversations is well written, the optional responses have zero impact on how it all plays out. Of course the gameplay needed improving too, with dull interaction and underused stealth. The only thing consistently exceptional about Backbone is the visual and music design, but whether they are enough reason to play it depends on your own personal guidelines.

Our ratings for Backbone on PC out of 100 (Ratings FAQ)
Presentation
85
The pixel art design is awesome and combining it with subtle 3D effects makes it pop even more. Music is not neglected and consistently helps set an excellent tone.
Gameplay
40
Choosing various dialogue options does not change the story, despite how diverse they seem. Basic interaction and underused stealth mean that this is not an involving adventure.
Single Player
55
Across four hours, it has two-thirds of a great story with smooth dialogue and interesting characters. An abrupt turn in the final act is regrettable and damaging beyond comprehension.

75
With 2D pixel art and simple backgrounds, it runs as expected. One dialogue interaction broke and froze the game though. Saves are too infrequent when exploring the streets.
Overall
60
With amazing art and music, Backbone has a killer introduction and a great vibe. Unfortunately, due to a dreadful turn in the narrative and underdeveloped gameplay, this is a classic case of style over substance. 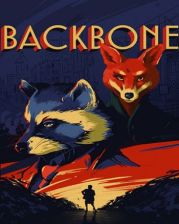