IN MY SHADOW
Platform: PC
47
SummaryNewsArticlesVideoScreens

In My Shadow Review

There is an interesting history behind the shadow technology used in video games. The earliest representations of them were basic 2D shapes pasted onto the landscape. Then, with the first 3D games, we got unceremonious dark blobs under characters. The biggest leap came when developers baked shadow maps into levels, granting a more natural look. And for many years now, we’ve had dynamic shadows that have increased in accuracy as the technology improved. In My Shadow puts dynamic shadows to use by asking players to move furniture to make ledges for a 2D character to jump on. It is reminiscent of a 2013 game, Contrast, albeit with a focus on short, formulaic puzzles. The boring design makes In My Shadow one to avoid. 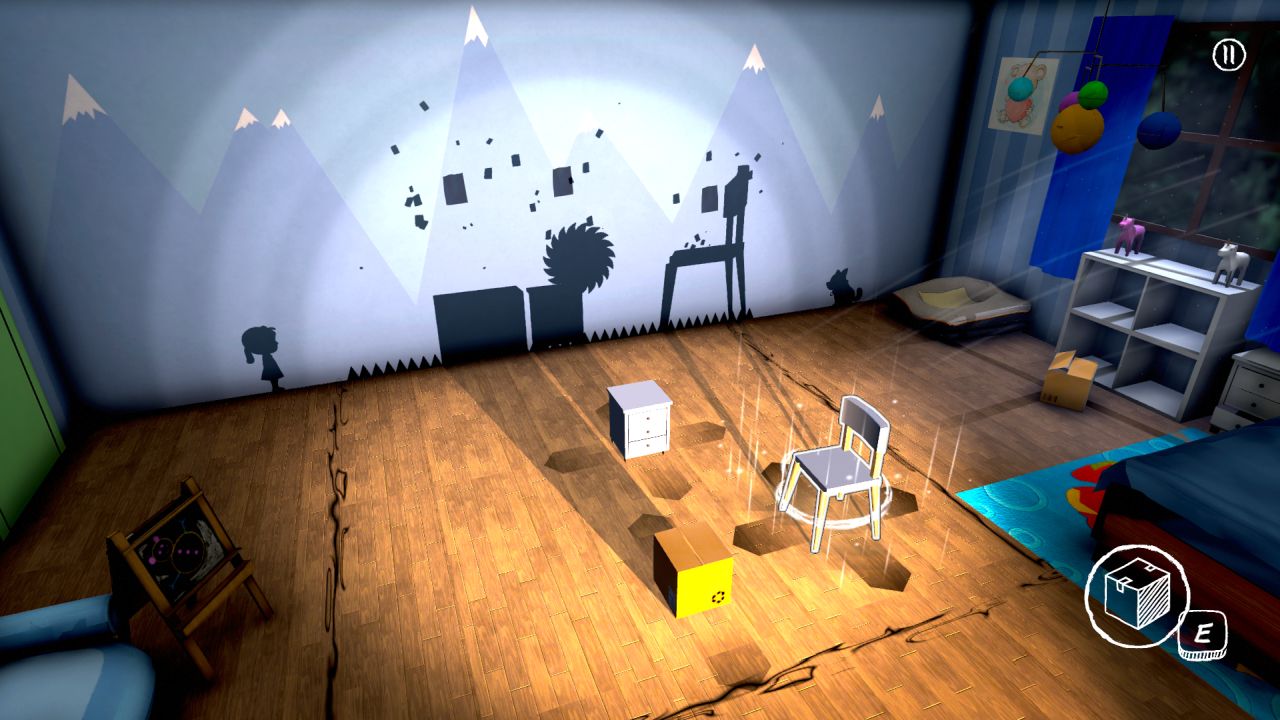 In My Shadow is mainly a puzzle-platformer, but it does have a story component. The game begins with a woman, Bella, avoiding a phone message from her estranged family. You play as young Bella and complete puzzles in a representation of the family home, to understand what occurred to create this rift.

Between puzzles are static images of family scenes and some text that describes each one. Bella is melodramatic about everything. She gets angry after playing a board game with her younger brother. She neglects the loyal family dog. And she starts to find family dinners annoying. These squabbles are silly. Her reason for leaving is never justified outside teen angst. There is no pivotal event you might expect. Bella is unlikable and her story is unconvincing. What’s worse is that the story jumps around in tone; she’s happy in one scene and upset the next. It also switches back and forth through time. When it comes to the story, In My Shadow would have been better without one.

Puzzles are straightforward at least. Bella is a 2D shadow, on a wall, that must collect all the ‘memory pages’ inside the wall. But some are found up high and others are languishing over deadly spiky obstacles. To reach them, you move 3D furniture around a room so that it will cast a shadow to make a ledge. Once you snatch all memory pages, you move Bella to the opposite end so she can greet her shadow family. 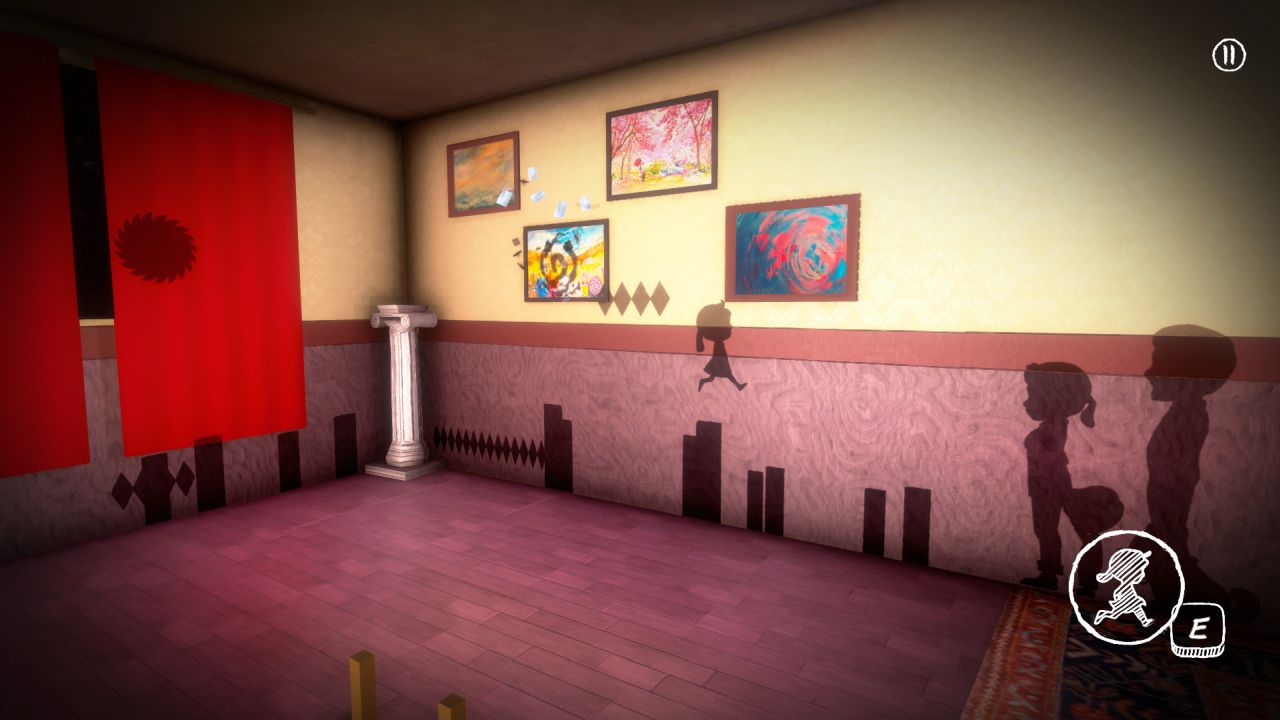 At first there is only one wall surface and one light source. The furniture is usually tables and chairs. Chairs can be rotated to form stairs for Bella to jump higher. The trick is to roughly judge how far Bella can leap and place the furniture in the right position from the light source. Things get more complicated when there are two walls and two light sources, as one piece of furniture can produce two shadows. Moving saw blades and teleporters add difficulty, but never enjoyment.

Unfortunately solving the puzzles is more about iterative furniture movements than deep thought. It is usually clear where furniture is needed as there are not many different shapes or memory pages. The game increases difficulty by locking furniture movements in one direction but this often helps more than it hinders. When multiple light sources are in play, the furniture has to be precisely situated because meeting the right placement on two walls has a narrow margin for error.

And there will be many errors because completing puzzles is still about jump-testing the shadows until Bella can reach all pages. Ledge too high? Move the table closer to the wall. Too far? Move it sideways. Now it’s too low? Quit the game and come back when you’ve forgotten how bad it was. There are only a handful of puzzles that require some interesting furniture rotations, like using the tricycle in her brother’s room. 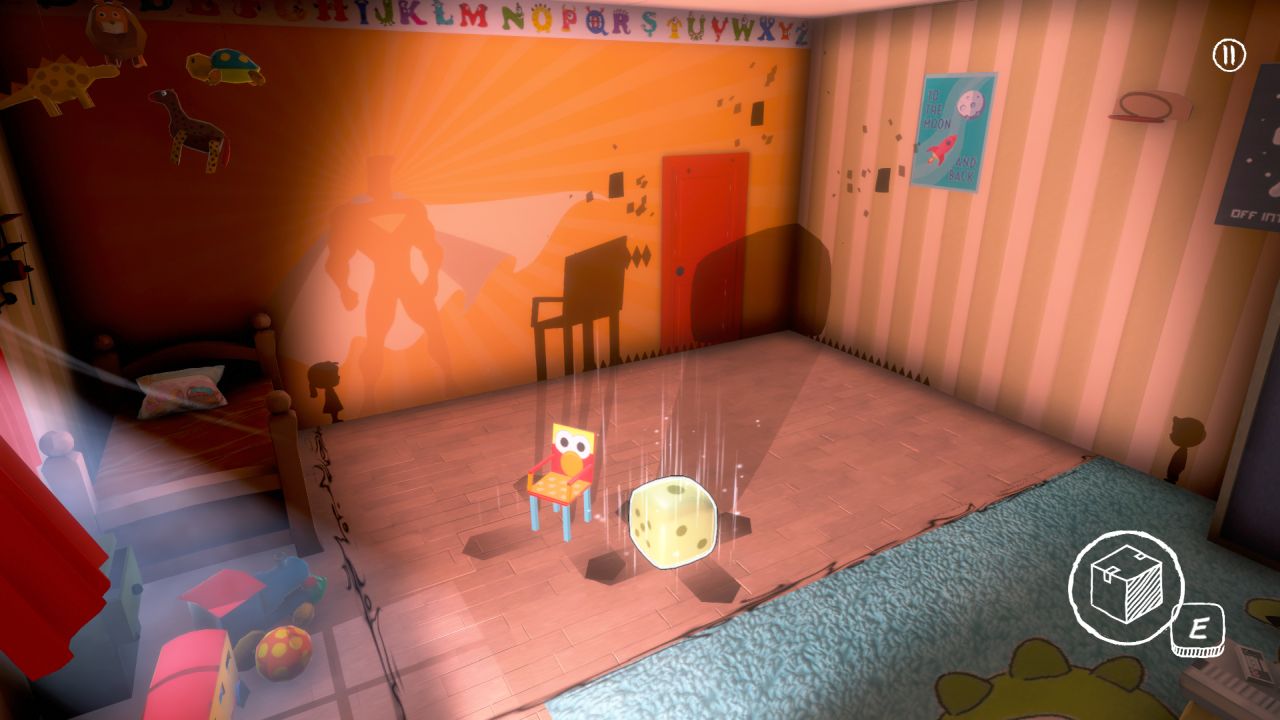 Platforming is basic although it is still a neat technical feat to move across shadow ledges that were created by arranging 3D objects just seconds ago. Bella only has one jump height, no matter how lightly you press the jump button. This limitation is used by many puzzles thanks to obstacles placed obnoxiously just under jump height. At least Bella can move in the air, to grab memory pages and return back to the same ledge.

The technical side of jumping on shadows is without major flaws but there are some caveats. Certain objects in specific rotations can have protrusions that tend to catch Bella or stop her suddenly. If an object’s shadow is right on the corner, it can become an invisible wall. She can also fall into small gaps and get stuck, although this is fixed by pulling back, moving furniture, and starting again.

Despite there being over 50 puzzles, only a few are satisfying. Since each one is little more than shuffling furniture and dull platforming, the experience is monotone across the whole three hours. Even the solemn music, while initially appropriate, is too simple and loops so often that it has to be the reason why Bella left home in the first place. The room designs are impersonal and drab. The character design, as seen in the story scenes, could be likened to those Nintendo Miis; that is to say they are hideous. This is one shadow game that might have looked better without any light at all. 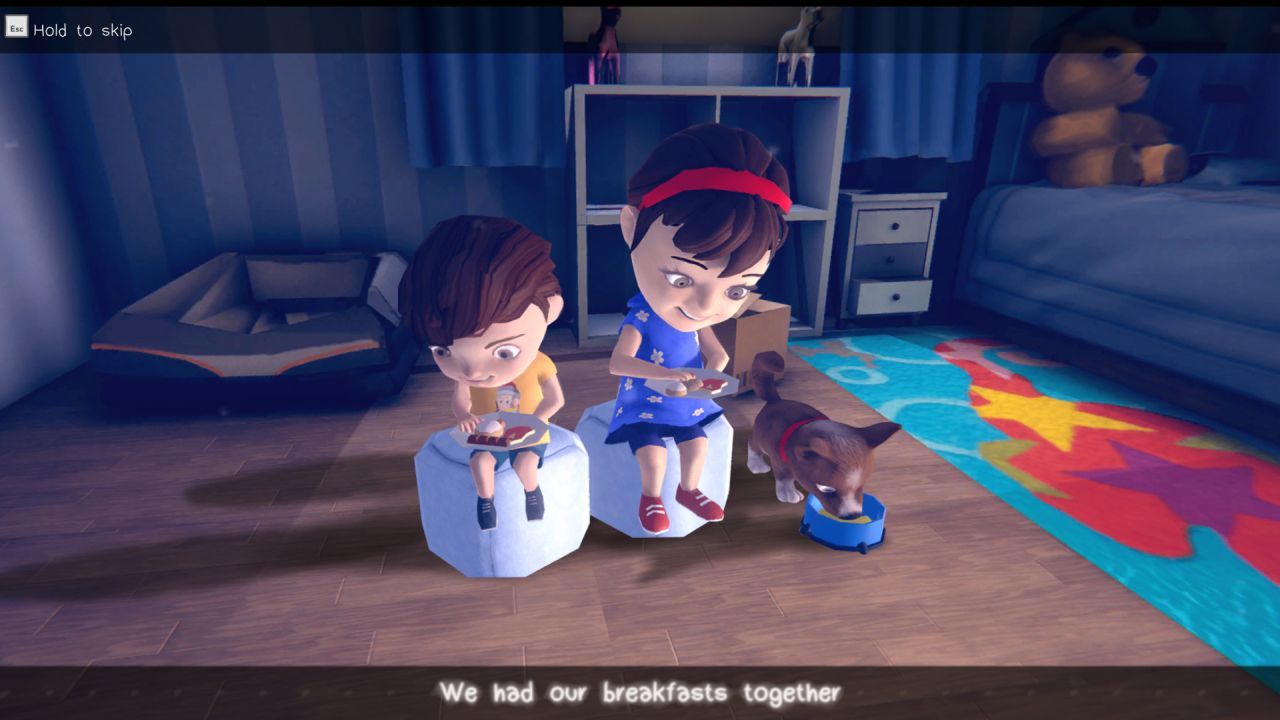 Shadow technology has grown leaps and bounds since its humble beginnings and it is a shame that it has all led to such a flavorless puzzle-platformer as In My Shadow. The puzzling involves jostling furniture and jumping upon newly formed shadows until they work together well enough to grab all the memories. But it is fiddly and boring. The story, if it could be called that, is a mess. And the overall presentation is less memorable than a dark blob on a moonless night. The best gift that In My Shadow gives us is a greater appreciation for that 2013 shadow game, Contrast, which at least had a decent outline.

Our ratings for In My Shadow on PC out of 100 (Ratings FAQ)
Presentation
50
Consists of plain environments, simplistic story scenes, repetitive music, and ugly characters. The shadow part of the adventure at least looks okay.
Gameplay
45
Occasionally the 2D shadow puzzles gel together with the furniture shuffling to create something satisfying. But most of the puzzles are bland and repetitive with constant iterative adjustment and little fun.
Single Player
30
An incoherent mess with inadequate justification for its many trivial scenes. The story is more of a detraction than a distraction.
Multiplayer
NR
Performance
(Show PC Specs)
CPU: AMD Ryzen 5 3600
GPU: XFX RX 480 GTR Black 8GB
RAM: 16GB DDR4
OS: Windows 10 Pro 64-bit

75
At least technically it functions well enough, although there are some minor glitches with the shadows.
Overall
47
Across three hours, In My Shadow has a few puzzles that might make you stand up in your chair. But the rest of the dull, fiddly shadow-moving experience will make you wish you turned out the lights and had a nap instead. 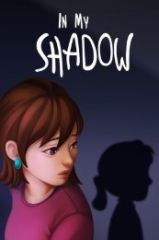 In My Shadow
6 images added 16 days ago