Solid, but cracks under pressure

The best survival games grab players hook, line, and sinker. They somehow make mundane activities fun. Eating food, gathering resources, and building shelter all appeal to our primitive monkey brain. Yet the act of survival traces back much further. Before primates, before mammals, before birds, and before amphibians, there were fish. And that could be why Subnautica, which had us swimming with the fishes and then eating them, turned out to be so great. Actually it was probably because it tied depth to progression and provided a stream of interesting tasks. Subnautica: Below Zero is a new standalone entry that provides much of the same addictive survival gameplay. As you might guess, Below Zero incorporates cold temperatures as players explore a new arctic region of Planet 4546B. While largely an enthralling dive, certain new additions are a lost cause. 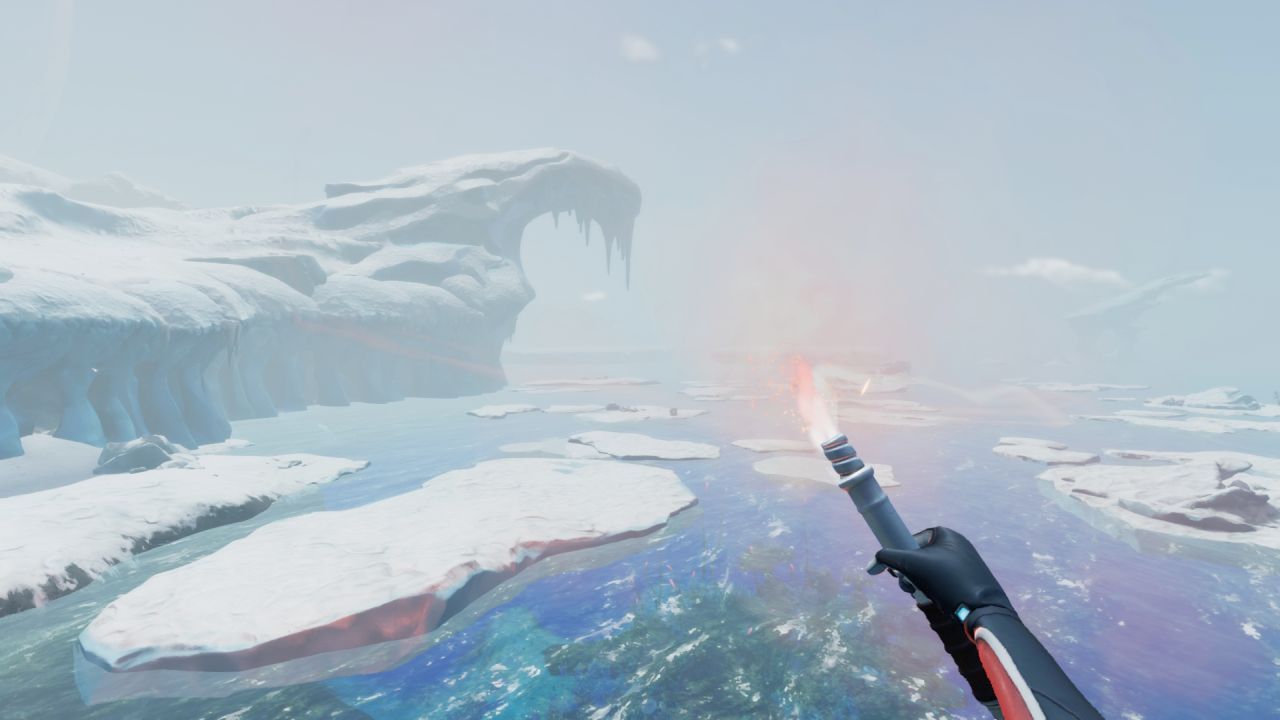 In Below Zero you play as Robin Ayou and arrive on Planet 4546B after learning about the death of your sister, Sam. The company Sam worked for claimed she died on the planet from her own negligence. Robin believes otherwise, so she has come to the planet (alone) in search of answers. In practical terms this means scouring company bases for audio logs and tracing clues to remote locations. You might find a map early that shows the rough placement of each base and a compass direction is all you need to find them. Your sister’s death is not the only point of investigation; an alien entity makes contact and encourages you to find artifacts. Together these two story threads will keep you occupied and both have a conclusion.

While the narrative provides drive, the story has pacing issues. Audio logs are often long and boring, with most attempts at humor failing. The logs are also placed next to each other in rather small bases, and this means walking in a circle, listening for important clues, before grabbing the next log off the rack. Despite lots of logs, the narrative felt incomplete and out of order. It could be that bases were intended to be visited in a specific order even though none required special tools. The alien side fairs better as Robin automatically participates in two-way dialogue at staggered intervals. This implementation also means players can keep doing whatever task they were doing in their underwater playground.

Like its predecessor, the basic underwater gameplay involves constant progress and basic survival mechanics. At first this means capturing a fish to turn it into filtered water. Then you're smashing rocks to craft a floating storage chest. Once you get a scanning tool, you can perform research to unlock food recipes and make tools like a sea glider. To dive deeper, a bigger oxygen tank is required—although the presence of oxygen plants makes some dives trivial (pipes that bring air from the surface never find their place). Once enough resources have been gathered, vehicles and bases can be built to establish a more permanent home. Then you can explore the awesome underwater biomes with leisure. It can be relaxing to drift along for minutes once you are fully upgraded. The basics are addictive and the flow into deeper water is similar to its predecessor in the early stages. 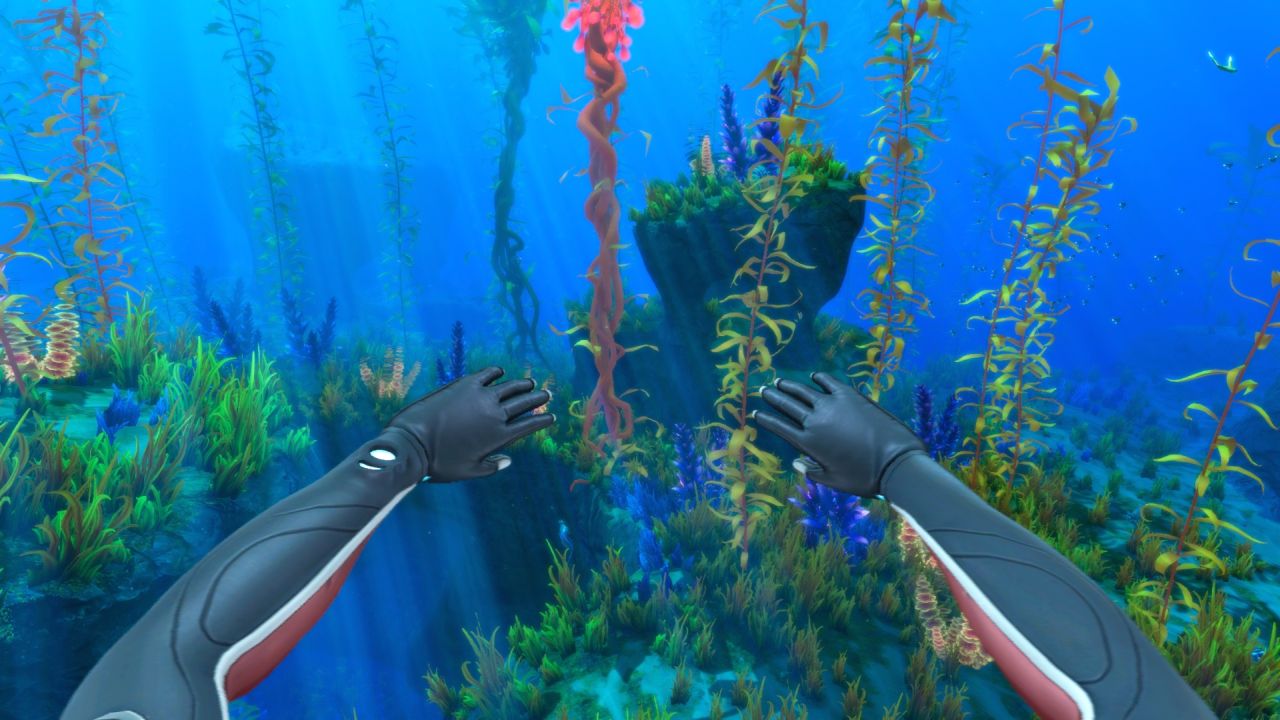 Not all of the adventure is under the sea. There are land masses and icebergs that occasionally have something interesting on them or inside them. Since the region is arctic, body temperature becomes a concern when venturing above the waves. Special heating plants and hot-steam vents give off thermal radiation. Caves also reduce the cold. If you are near water, merely diving back in will restore warmth. Custom gear can be made to insulate against the cold, although materials for it are not logical to attain; fur from beasts must be ‘stolen’ by remote-controlled penguin robots, as merely killing them nets no typical reward. But assuming you come prepared, exploring over land works a bit like underwater with the need for heat replacing the lack of oxygen.

While small landmasses offer brief respite, there are two big frozen expanses that are horrible to explore. These areas have too much similar geometry—white canyon walls and narrow ice caves. The zones twist around like a maze, and trying to reach an area you have already visited is harder than it should be. With looping side passages, nothing is straightforward and distinct visual markers are rare. Frequent dangerous weather, like blizzards and hailstorms, also hurts visibility. Given all this, getting turned around or temporarily lost is common. Unfortunately both land regions must be deeply explored if you wish to complete the story.

The new Snowfox vehicle helps to explore the bigger land zones. It is a hoverbike that moves at a decent pace and can even jump and boost forward. The downside is that it runs out of power rapidly and is quite fragile. In one of the frozen expanses there is an ice-worm threat. And when this horned beast emerges, it knocks you off the Snowfox and damages it. This just makes trips extra frustrating, unless you install a thumper device that keeps the worm at bay. 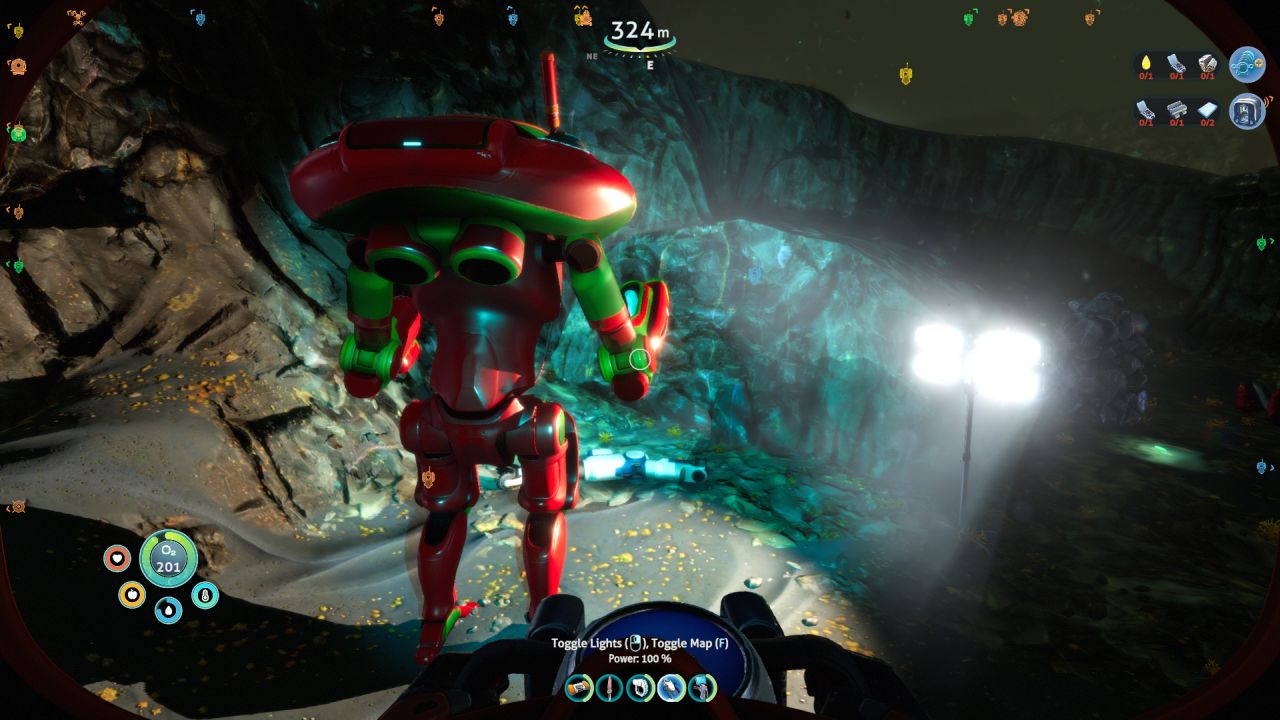 The Prawn suit exoskeleton is a returning vehicle that functions like in the previous game. Although originally designed to march along the ocean floor and mine resources, it turns out to be quite reliable for exploring the tundra. Compared to the Snowfox, the Prawn has more brawn and can endure the ice-worm’s horn without you being torn from the vehicle. Its power cells can be swapped and improved. Plus it has storage space and a drill that makes short work of the hostile snow beasts that like to pounce. The Prawn’s biggest problems are its slow walking speed—alleviated by strafing diagonally forward—and clumsy navigation over uneven terrain.

Once it is time to go back to sea, the new Seatruck submersible fills many roles in the deep blue. When first constructed, it resembles the Seamoth from the previous game because it is a one-man pod that can zip around in the shallows. But the beauty of the Seatruck is that you can attach modules (compartments) to form one big conga line. Add a storage module to cart more resources. Attach a fabricator to craft necessities in remote locations. If you are overly attached to your Prawn suit then build a docking module so you can attach it to the Seatruck. Modules can be added or removed quickly to fill any immediate need. When fully kitted out, this underwater train fulfils a similar role to the Cyclops (no longer present) from the last game but with more of a transport focus. 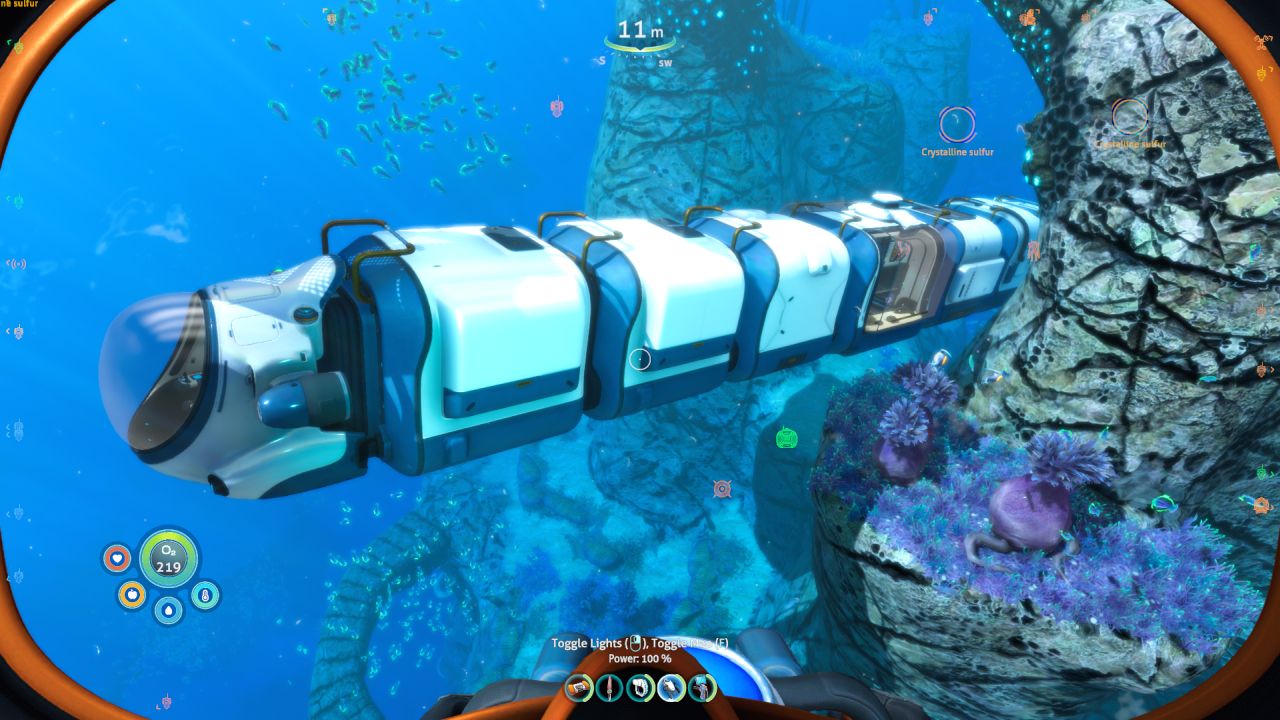 Bases are more important this time, probably because of the absence of the home-away-from-home Cyclops. It is still intuitive to snap modules together, add glass windows, furniture, extra reinforcements, and put in some contraption to power it. Preparation helps to ensure the base has room to grow, although it would have been great to remove smaller world obstacles like boulders and static flora. Bases have many uses: filtering salt out of the ocean, storage, indoor plant beds for growing food, charging stations for batteries, and vehicle repair bays. One of the most useful abilities is a scanner which provides a 3D map of the surrounding seascape and locates resources which you can view on your HUD. If you build in the right spot, progressing and exploring will be easier.

While the underwater gameplay is better than on land, it too has a few problems toward the end of the 30 hour adventure. One of these is the ease in which points of interest can be missed. Here luck comes into play as it depends on where you built your base(s). Certain story logs are found in obscure locations, along with tools and upgrades, and a few underwater caverns have narrow entrances that are easy to cruise over. Missing these openings will make certain resources scarce. The deepest cave is unfortunately a repeating maze containing two story tasks and a super annoying leviathan sea monster. Like the ice canyons on land, it seems purposely hard to navigate and left a sour taste at the end. 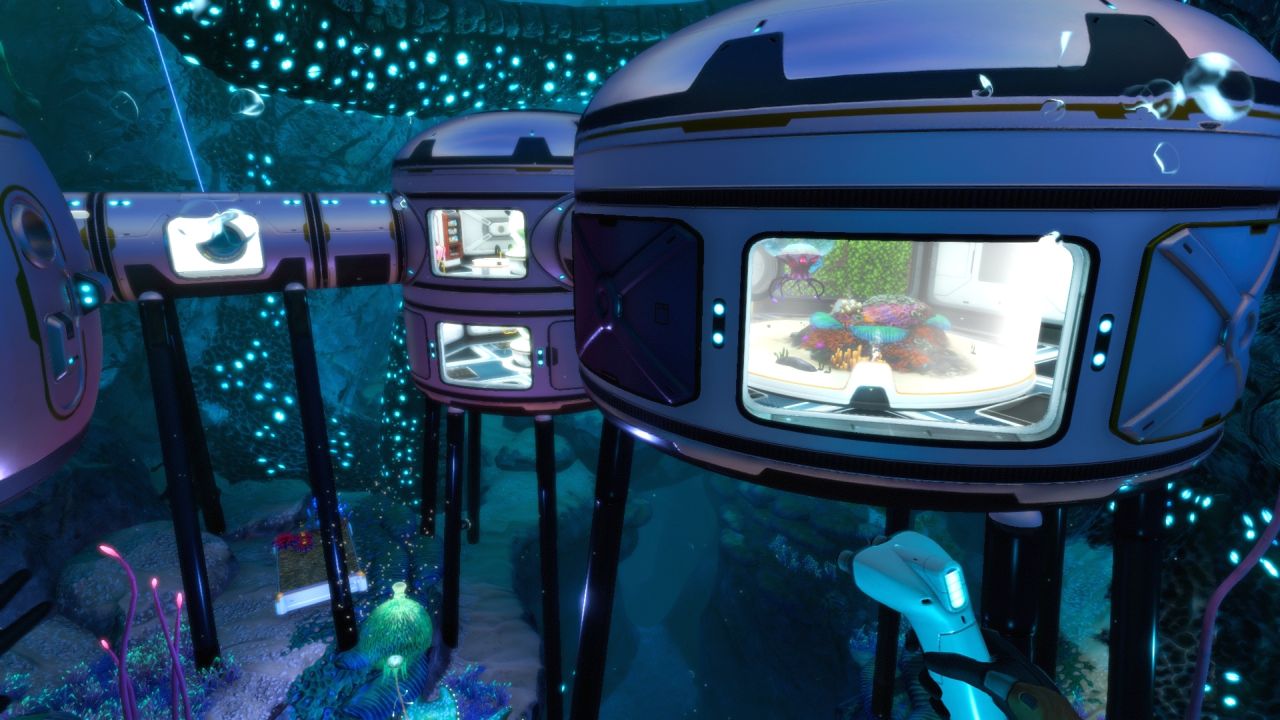 Despite a few issues, Subnautica: Below Zero still has the same addictive underwater gameplay loop of its predecessor. The new Seatruck is a good modular vehicle that can be customized to suit any role. Constructed bases are more important and remain fun to build. Various underwater biomes help to keep players exploring deeper, and an endless stream of upgrades ensures progress is brisk. Unfortunately the narrative struggles with clumped delivery and lacklustre content. And the two big frozen landscapes are miserable to explore due to their maze-like designs. However, Below Zero still captivates because of the strong currents that can be traced back to the warm-ocean waters of its predecessor.

Our ratings for Subnautica: Below Zero on PC out of 100 (Ratings FAQ)
Presentation
80
Still a nice looking game under the ocean, thanks to distinct biomes and cool sea life. The frozen lands are less appealing visually. Some presentation choices related to the story make the game look cheap.
Gameplay
80
The basic survival loop under the ocean still is awesome and provides regular goals that might involve upgrades or tools that help to dive deeper and farther. The exploration on land does not progress as well.
Single Player
65
While there are two main story threads, the story content is poorly delivered in one because it is clumped together and rather boring. The alien part gets a tick because it does not intrude on the general gameplay.
Multiplayer
NR
N/A
Performance
(Show PC Specs)
CPU: AMD Ryzen 5 3600
GPU: XFX RX 480 GTR Black 8GB
RAM: 16GB DDR4
OS: Windows 10 Pro 64-bit

70
The initial load still takes some time. Some ocean geometry pops into view, or changes shape, from a short distance away. There are some clipping issues, including resources and beacons that fell through the world.
Overall
74
Subnautica: Below Zero is a good survival game, even if the new frozen land areas are not fun to explore and the story has several pacing issues. Fortunately, the solid progression system and mastery of the sea makes it easy to recommend for fans of the original. 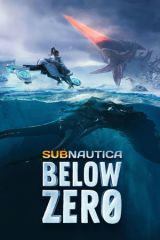 All videos for Subnautica: Below Zero (2)
Advertisement ▼