A handcrafted adventure for fans of a certain style

While the point and click, 2D adventure genre isn’t quite at the heights that it was decades ago, developers continue to rely on it to provide mind bending adventures. While there is plenty of choice when it comes to this subgenre, one developer has managed to carve out a very distinct niche for itself. Amanita Design uses strange worlds, different visual styles, and unique perspectives to engage and dumbfound players who choose to go on their adventures. It's an area that has so far been unchallenged by others, but a new title called Papetura from developer Petums hopes to make its own mark with a similar style. 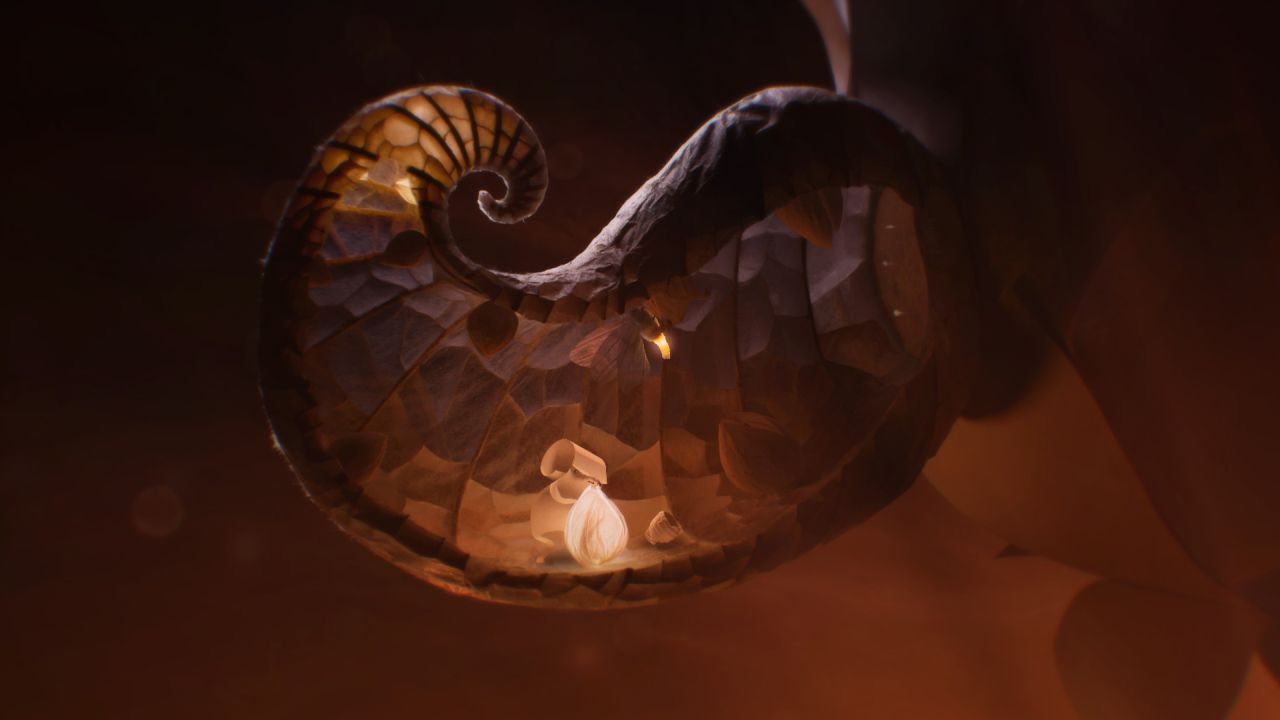 Papetura is a minimalistic game, and so the story is appropriately simple and mysterious. You play as a sort of character made of paper, who one day is woken up by a dark creature who has seemingly invaded your home. As you hide and follow in its footsteps, you soon come across a bright light that seems to be the source of energy for you and all the various creatures found in this world. However, the light is then stolen, and so you set out in a quest to recover it, and restore peace.

The game doesn't feature any writing or dialogue, but there are occasional 2D animations in a thought-like bubble, that provide hints as to what may happen next. The story, like many other aspects of this puzzle adventure game, share a lot of similarities with the works of developer Amanita Design. The creatures you encounter make funny noises, perform strange actions, and add to the eerie vibe of the whole place.

Early in the game you'll be united with a strange cat-like creature who will accompany for the rest of the adventure. This creature is used to solve puzzles, by being able to shoot small projectiles at things, and also acting as your paddle in a water scenario. As it amusingly gasps for air with each time you row, it exemplifies the strange and yet amusing nature of this world. In another example, you may have to use this cat to unclog a creature, so that it can rise or lower the water level in the area. 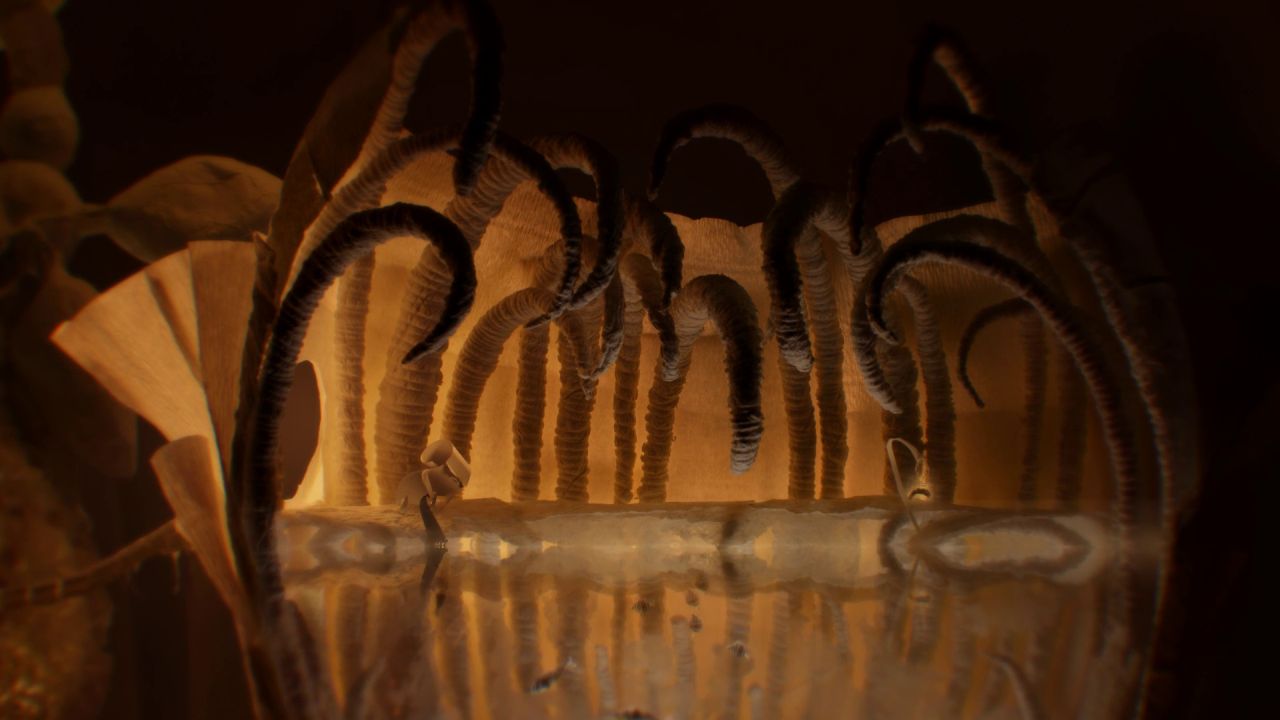 On your way to restore the life to your home, you'll use typical point and click controls to walk around and interact with items in the environment. Your character walks pretty slowly, and the items that you can interact with do not offer any sort of shimmer or hint. You may need to shoot at a light to create a specific pattern, or keep kicking a creature until it goes to another screen. So on occasion, you might find yourself simply clicking around to see what can happen.

As a puzzle game, Papetura can be hit or miss. As it takes place in an abstract world, you don’t always know what to look for or what kind of items can interact with others. This leads to some obtuse solutions, and because the game is so brief, there's no time to introduce players to new concepts – you're sort of thrown into the fray and expected to figure out new mechanics on your own, without much warning. A few puzzles seem confusing, and require actions that you didn’t realize you could perform until that point. If you do get stuck on a puzzle, there is a hint system that requires a fast paced minigame to be overcome to reveal the hint. Though the hints aren't always helpful, they are appreciated as an option. 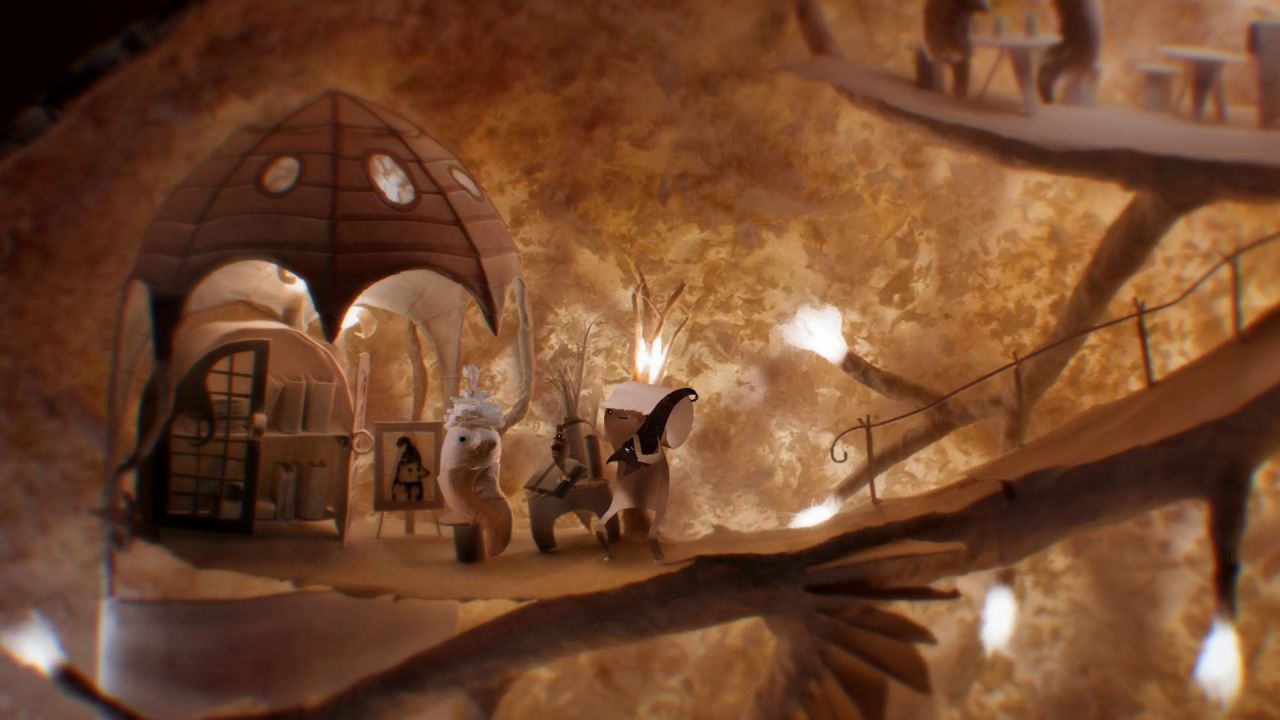 Although it features a fair share of puzzles, Papetura is not at all a lengthy experience. The game can be finished in about an hour, and offers no further replay value or collectibles to hunt for. Because it's so short, the story and puzzle mechanics don't get a chance to really draw you in. And even despite this, the game re-uses the same locations a few times, which makes it a bit of an underwhelming value proposition at $12.

But perhaps the game's main selling point isn’t the puzzles or story, but rather the setting and art. As mentioned, the audio design is minimalistic and intriguing, but it's further supplemented by an atmospheric and touching soundtrack. And perhaps most impressive of all, the game's art, from characters to environments, were all created with paper – real paper, not simply in Tearaway style. It's a very unique visual experience, and one that undoubtedly took a very long time to hand craft. The lighting also supplements the game world with the contrasts of darkness, light, and occasional flame.

Imitation is the sincerest form of flattery, and Papetura is unafraid to compare itself to the works of Amanita Design. Luckily for the developers, Petums, the comparison is extremely favorable. The game very successfully manages to evoke many of the same feelings of a mysterious world full of atmosphere, and the minimalistic approach to story and puzzles all but ensures that fans of this style of games will be extremely satisfied. It's not a very long experience and its scope is highly limited, but if you're looking to play something unique – and not made by Amanita Design – Papetura is a worthy alternative.

Our ratings for Papetura on PC out of 100 (Ratings FAQ)
Presentation
85
A handcrafted world that looks quite wonderful, and undoubtedly took a big effort to put together. The minimal sound effects and music contribute to a strong atmosphere.
Gameplay
70
Exploration is slow paced, with a scattering of puzzles that don't always make sense.
Single Player
60
It's a charming but brief adventure, with a minimalistic approach to storytelling. No replay value or collectibles beyond its short 60 minute runtime.
Multiplayer
NR
None
Performance
(Show PC Specs)
CPU: AMD Ryzen 5 3600
GPU: ASUS Radeon RX 580 8GB
RAM: 16GB DDR4
OS: Windows 10 Pro 64-bit

90
No issues
Overall
73
Papetura is a charming but very brief puzzle adventure, and one that will most strongly appeal to fans of unique art and abstract worlds. 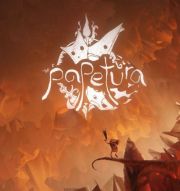 971. Marvel's Guardians of the Galaxy
PlayStation 5