You'll have to try hard not to

The subject of memory manipulation is often explored in Sci-Fi settings. It can take the classic trope of amnesia, and put a somewhat better and more explainable spin on it. This offers the writers more room to explore, while adding-in details to spice things up. Don't Forget Me is a new adventure game that follows this design to the letter, as it throws in clichés about government conspiracies and similar themes. The end result, accompanied by underwhelming gameplay, is ironically a title that's easy to forget. 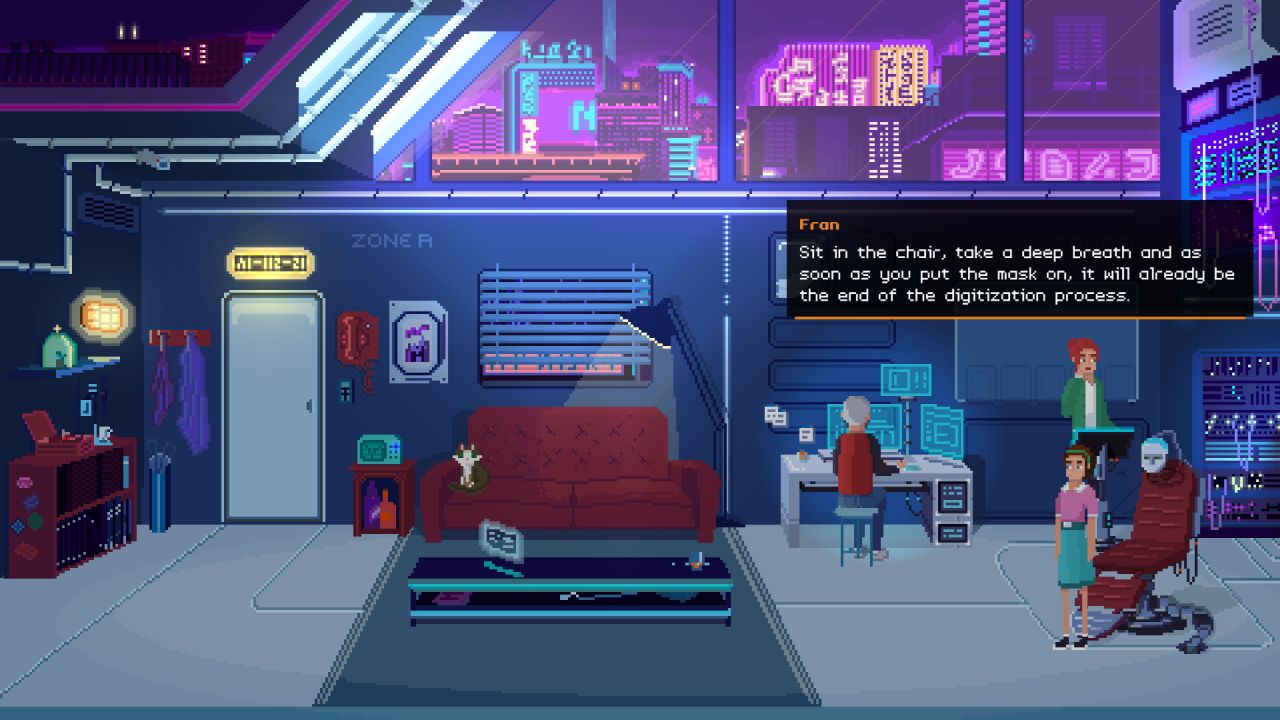 Players assume the role of a woman named Fran, who finds herself passed out and without any memories on the doorstep of a clinic. This clinic is run by a man named Bernard, who just happens to have the equipment to restore and backup people's memories from their chip. This is a future where any external memory access or manipulation is forbidden, so he offers the services off the books to folks who want to get a copy of their precious memories before they forget them. Fran doesn't remember who she is or where she came from, so the two agree that in the meantime she should rest and start working for Bernard at his clinic. It's an odd sequence of events, to be sure.

As the pair continue to help various people get a copy of their memories, discreetly delivered to their home afterwards, they soon come across a client who appears to be involved with a conspiracy. It turns out, there is a secret government project that aims to get more control over people's memory chips, and a group has broken away and is trying to stop it. The man asks for Fran and Bernard's help, who agree and become embroiled in the conspiracy.

Don't Forget Me is a narrative-focused adventure, as there's not much gameplay to speak of; unfortunately that narrative is very underwhelming. From the opening scenes to the controversies that follow, the writing is decidedly basic and ridden with clichés. Beyond the memory manipulation aspect, the futuristic setting offers few other concepts or challenges. You do get to make dialogue choices - there's even the option to not help the mysterious man, which rolls the credits – but this is not to be confused with a choice-based game. The things you select rarely affect anything. At under two hours long, the story barely has enough time to get interesting. 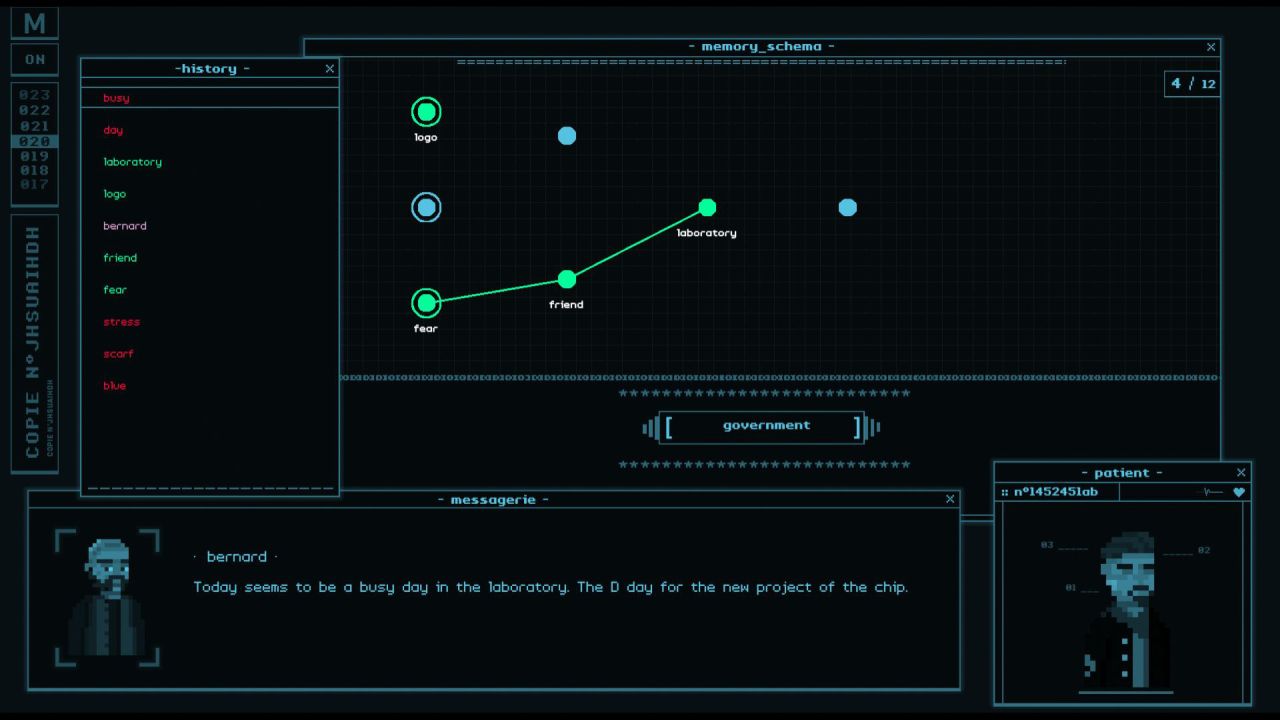 The actual gameplay is quite limiting, and very old school, not in a good way. For most of the game, you have no control over Fran – she moves around the rooms on her own, the conversations just happen, and you've got little to do but be a passive observer. In some moments, when you do get direct control, you can walk around the tiny levels and interact with a thing or two, which offers a few lines of optional dialogue. The scope is quite limited – most of the time you'll be in the clinic, with the occasional trip to another location.

At the clinic is also where you'll experience the game's main mechanic, the discovery of patient memories. Whenever you have a client in the chair, Fran and Bernard will hook into their memories, where your job will be to try and guess their thoughts, state of mind, and motivations. In practice, this means you will be trying to guess key words that advance the memory branches, based on the previous sentence. The most challenging aspect is finding a keyword to get started – before you actually know what the client is thinking about, and are supposed to guess a starting point based on their appearance or mood. This process is pure guesswork, and Bernard's offer to help is empty, as he provides no actual clues. The left side of the interface keeps a list of the things you've already typed in, in an effort to avoid repeats.

Once you've guessed the correct word, Bernard starts telling you about the memories he is able to observe, and from there you again start typing the word that you feel is key. Most of the time, it's fairly trivial, and in the worst case scenario you can trial and error your way to the end of the memory sequence. There are occasional optional paths that offer more story bits, if you want to keep guessing their keywords. This old school design, where you've got to physically type in words, grows tedious, but again you only have to deal with it a few times, and if you get stuck (especially on the opening keywords), it artificially extends the game's run time. 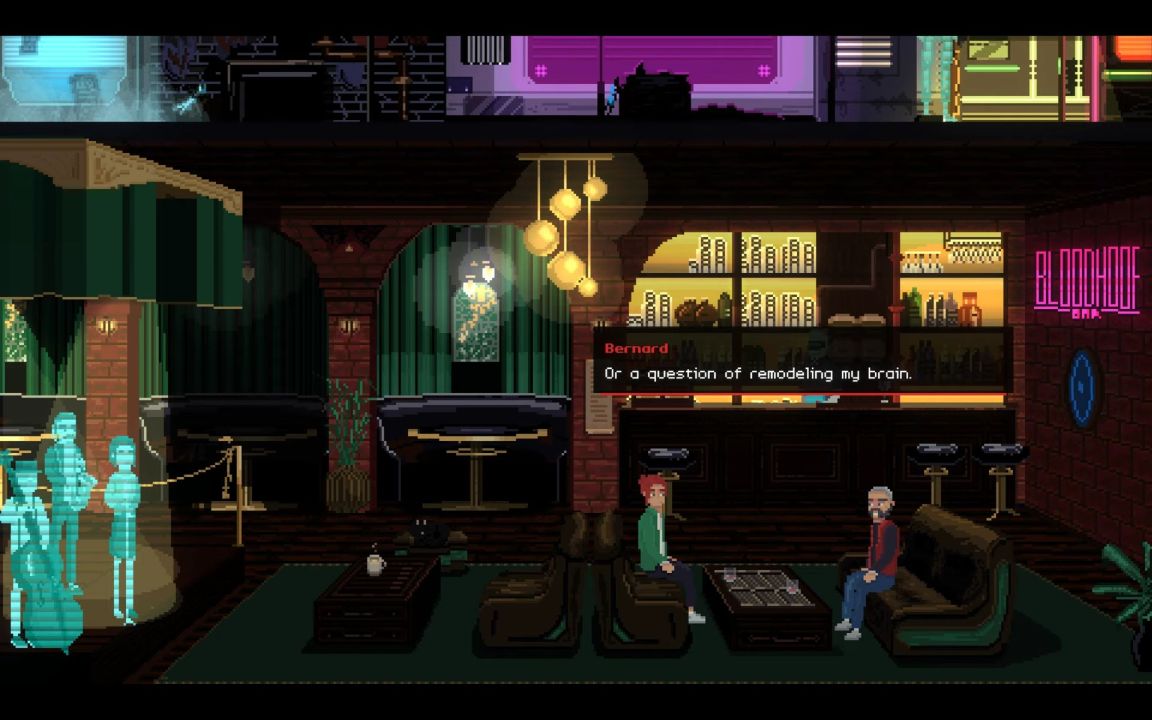 With such limited gameplay, the game doesn't even offer a mouse pointer, which doesn't hinder the experience too much. There are checkpoints at the start of each chapter, though there's never a reason to restart or go back, as the game is probably easily finished within one or two sessions.

Don't Forget Me employs the pixilated art style that may remind players of games from many years ago – or something much more recent, as the indie scene has used this style often in recent years. The art is nice to look at and the animations are okay, basic as they are. Audio design is very basic, and there is no voice acting. The soundtrack is strange – it features some nice classical and jazz music, which doesn't fit with the Sci-Fi setting at all, as the game insists on finding a reason to play music at the clinic and elsewhere.

Setting your story around memory loss and Sci-Fi memory manipulation is not overly original, but can be plenty enjoyable when done right. With Don't Forget Me, the experience is decidedly lackluster, with trivial writing and dialogue, and cliché narrative beats. The old-school gameplay where you have to type in words and hope you match what the developers intended is initially annoying with each new memory path, and subsequently trivial and dull once you've got the starting words. Its Sci-Fi setting underwhelms and is very limited in scope, with just a few locations, and the music, while well composed, doesn't seem to fit. With a brief sub-two hour runtime, there's not a whole lot that Don't Forget Me does well enough to recommend to any particular fans. It's a meandering adventure that is just okay, and is easily forgotten.

Our ratings for Don't Forget Me on PC out of 100 (Ratings FAQ)
Presentation
65
The art style is nice, though the game only offers a couple of locations. Music is also good but doesn’t fit the setting.
Gameplay
30
The main word guessing mechanic is challenging on the first word, and trivial on the rest.
Single Player
50
A very generic story that barely has enough time to fill in the details or get you engaged. Dialog choices add little to the experience.
Multiplayer
NR
None
Performance
(Show PC Specs)
CPU: AMD Ryzen 5 3600
GPU: ASUS Radeon RX 580 8GB
RAM: 16GB DDR4
OS: Windows 10 Pro 64-bit

80
No issues observed, though the game lacks a mouse pointer which may annoy some players.
Overall
50
Don't Forget Me offers a shallow story in a generic Sci-Fi setting. The word guessing mechanic is the only thing the game has to offer, and it isn't very good. The music and visuals are decent enough, but they don't fit together. 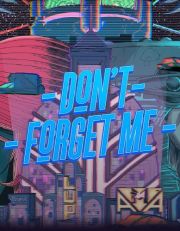