Lost Words: Beyond the Page Review

Remember Google Stadia, the next big thing in cloud gaming? While the hype has died down considerably after a year since its launch, the service is indeed still around. One of the things that Google tried to do to draw fans in was offer a few exclusives on its new cloud gaming platform. Much like the Epic Games Store, the Internet giant struck a few deals to help bolster the lineup, and Lost Words: Beyond the Page was one such title. But after a year, that exclusivity deal has reached its conclusion, so publisher Modus Games is now free to release the game elsewhere. Lost Words offers an occasionally heartfelt story and a few nice moments and art, but on the whole it's a rather forgettable small indie adventure that is slightly redeemed by its appropriately low price tag. 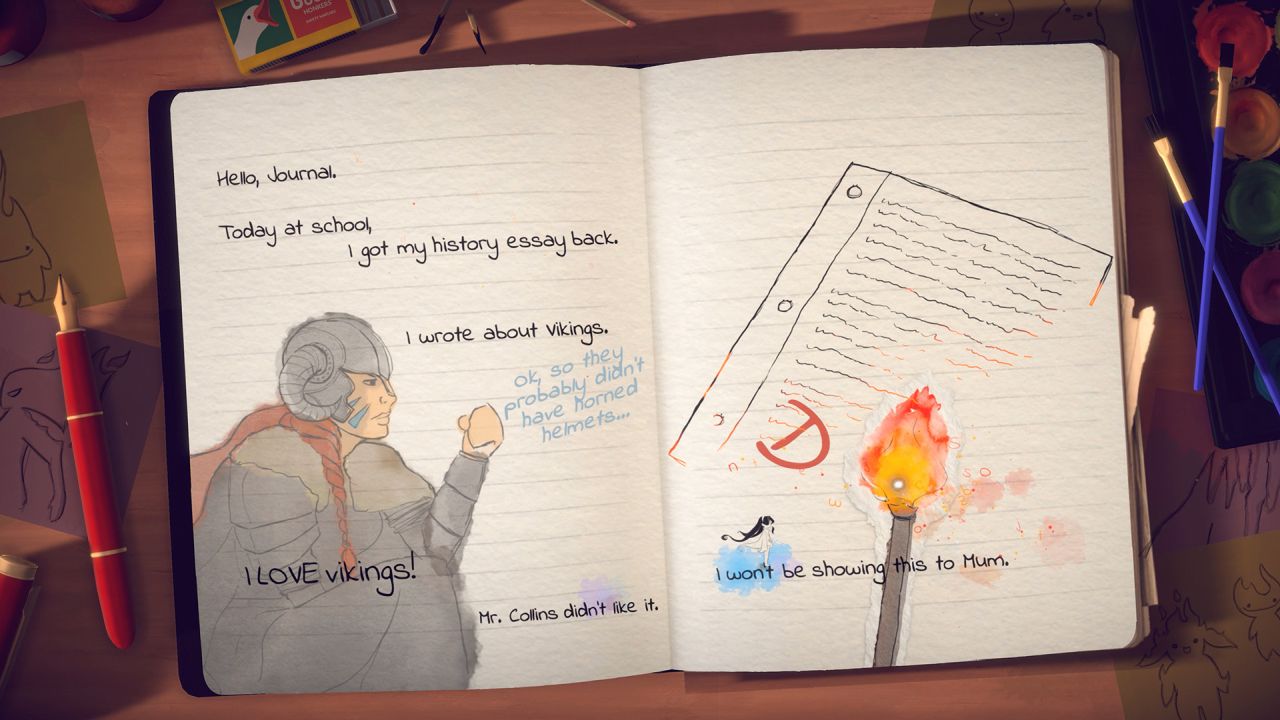 Lost Words tells the story of a young girl who is going through a troubled time in her life, while at the same time writing a fantasy story. You get to choose one of three names for the girl, as well as her outfit color. Throughout the game, there are occasional such choices that slightly change the writing, but it's hardly a reason to replay this four hour adventure. Both stories run in parallel – in the real world, the girl is writing in her diary about her relationship with her grandmother, who suddenly falls ill. In the fantasy story, she is a young adventurer who just became the Firefly Guardian of her village, taking over from the elder. However, she must set out to reclaim the fireflies of her village, after it is attacked by a dragon.

The game's narrative is strangely conflicting. It should be easy enough to tell the extremely relatable story of a beloved relative falling ill and how to deal with that hardship, but the writing and voice delivery has too many inconsistencies for the drama to click with the player. There is, of course, the dramatic crescendo towards the end of the game, and it takes place on the pages of the diary. It's a pretty contrived and obvious setup that pulls at your emotional strings, but this high point doesn't make up for the rest of the experience, which quickly devolves back into oddities .

The writing is very barebones and simplistic, as it tries to make on-the-nose parallels between the two worlds. On the one hand, perhaps this is a brilliantly intentional choice, to make you believe that a young girl is writing this, and not an adult writer / game developer. On the other hand, this makes the narration feel amateur and unrefined, which will take older players out of the experience. The girl seems to possess solid imagination skills, a grasp on the world and the writing ability of a capable teenager, and yet she acts like a five year old when it comes to dealing with her grandmother's health, for some reason unable to comprehend the events that are occurring, and why her parents are reacting to the situation in a more mature way. Even the game's main goal keeps flip flopping, as the young hero talks about the importance of trying to recover fireflies and chasing the dragon. 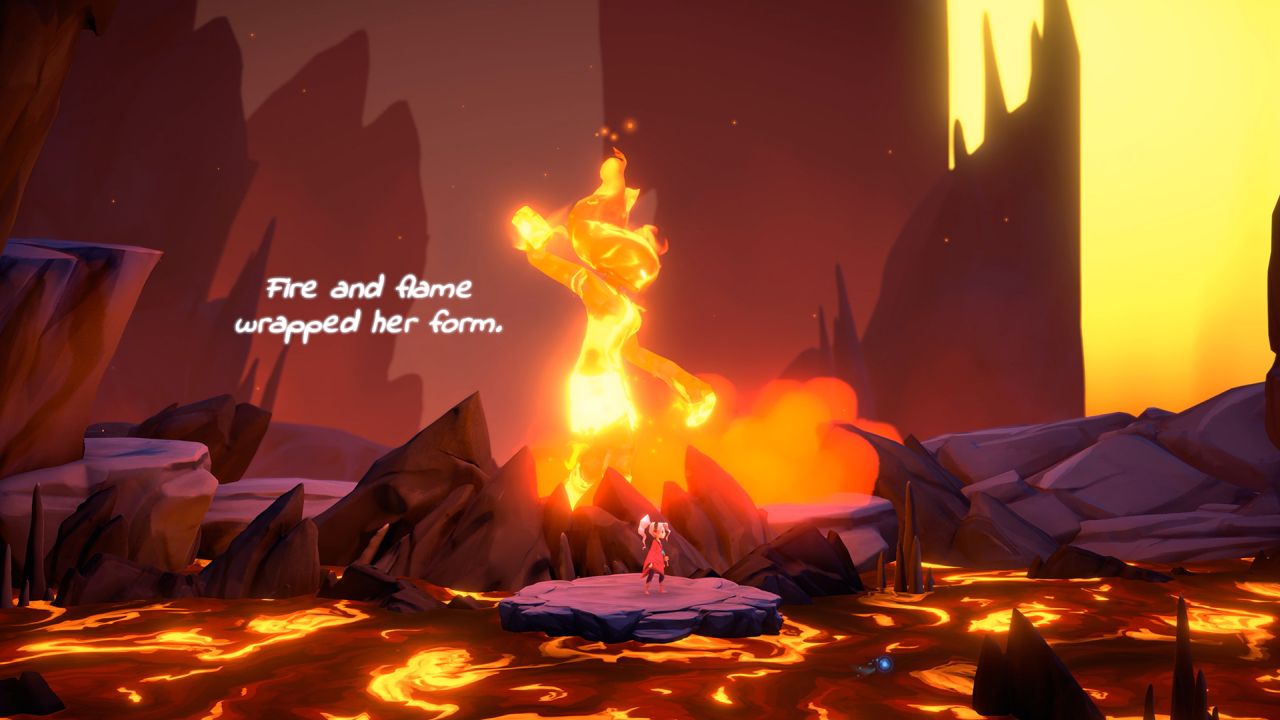 The young girl is the only voice and narrator, which means she needs to carry the experience on her shoulders. Unfortunately, it never really comes together. Like the story, her delivery is inconsistent and packed with naiveté – which again is a great match for the character, but a frustration for any adult that may want to play through this title and connect with it. The game also wants to be artsy by displaying all of its dialogue in text, whether on the pages of the journal or floating in the fantasy world, and it is read aloud only after it appears. For example, you might be climbing over a set of stairs, and the words appear below it one by one. Well, a lot of the time you'll be long gone by the time the words appear, and the voice actress reads them out even later, causing a big delay and making for a very strange sounding delivery. It's a presentation gimmick that can work, but it needed much more polish here.

The gameplay, like the story, is split into two types. In the real world, as the girl is writing in her diary, you control her avatar in 2D as she literally jumps around words on a page. You navigate from one side of the page to the next, through simple jumps and occasionally need to touch specific words and asterisks so they are transformed and a path forward is revealed. You can also use a cursor to select special words and move them around the page, sometimes placing them as a platform, other times to complete a sentence. While this setup is initially interesting, the gameplay is extremely basic and offers little challenge or interesting mechanics beyond the initial intrigue. Very rarely does the journal do something interesting or unique, and most of the time you're just jumping between words and sentences to get to the other side. 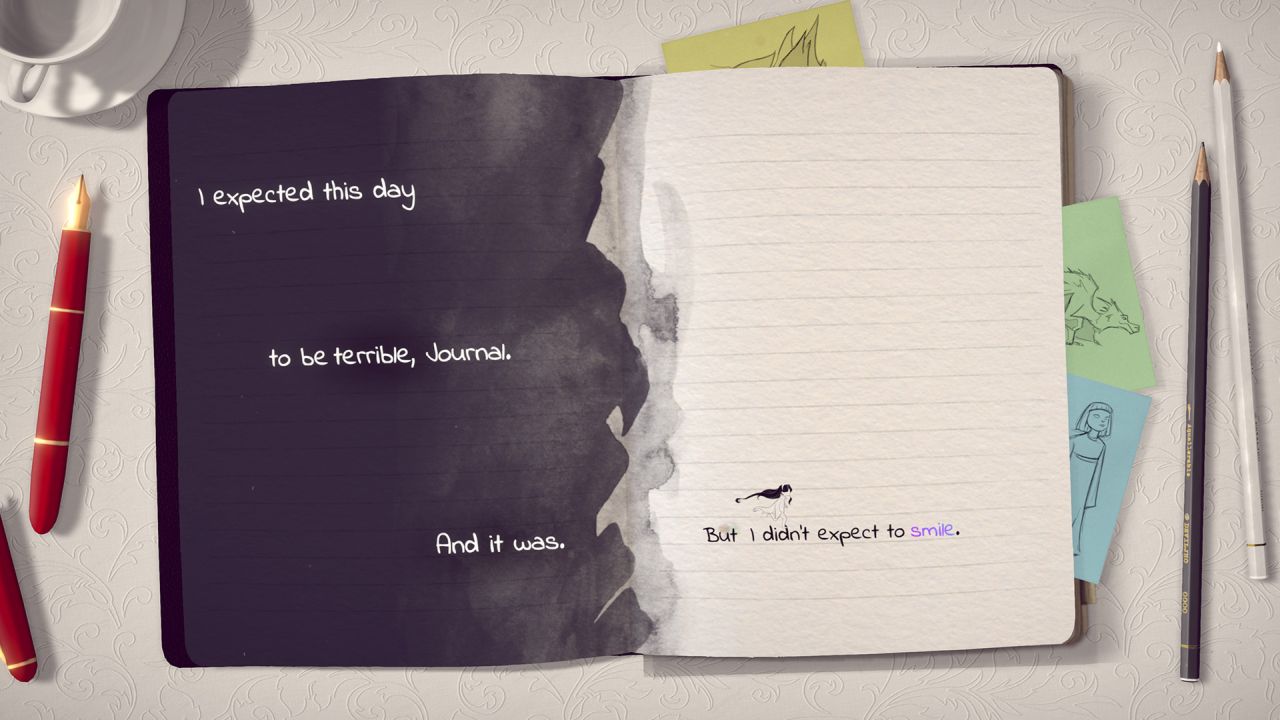 The second type of gameplay will take the hero into the fantasy world, where you'll do a bit more than just jump around. It's still a 2D adventure, but set in a more typical 3D background, as you will cross through a few different environments, such as grasslands, a desert, an underground cave filled with lava, and so on. The platforming mechanics are extremely basic and imprecise, though it works OK for the basic jumps you have to do. There will be occasional obstacles in the way, so you may need to push a block around to jump on top of, or climb a rope. A frequent point of annoyance is the camera, which sometimes refuses to move forward until the last moment, and introduces more strange pacing issues, just like the voice line delivery. You can collect those escaped fireflies (as an optional task, their importance apparently overstated by the story), which often means taking a very short detour in the linear levels.

Our hero also gets a spell book, which includes a few pre-set spells that become available whenever the game chooses. The spells include an ability to raise an object into the air, destroy, rebuild, create a silence around the girl, and a few others. Much like the rest of the gameplay though, these spells are only needed one at a time, and offer no challenge to the player. It's extremely easy to know what spell to use at any given obstacle. There is thankfully no need to ever swap between spells quickly – as each time you must awkwardly open the spell book menu, and use the cursor that's always on screen, to select and drag the spell around. The magic controls are unwieldy and grow annoying over the course of the game.

With Lost Words, there's also not much to be impressed by in its presentation. We already touched on the strange voice acting delivery, and the game's audio effects are similarly minimalistic and subdued. The soundtrack however proves to be a highlight, offering a nice score that fits every scene quite well. It helps elevate some of the game's most notable moments. 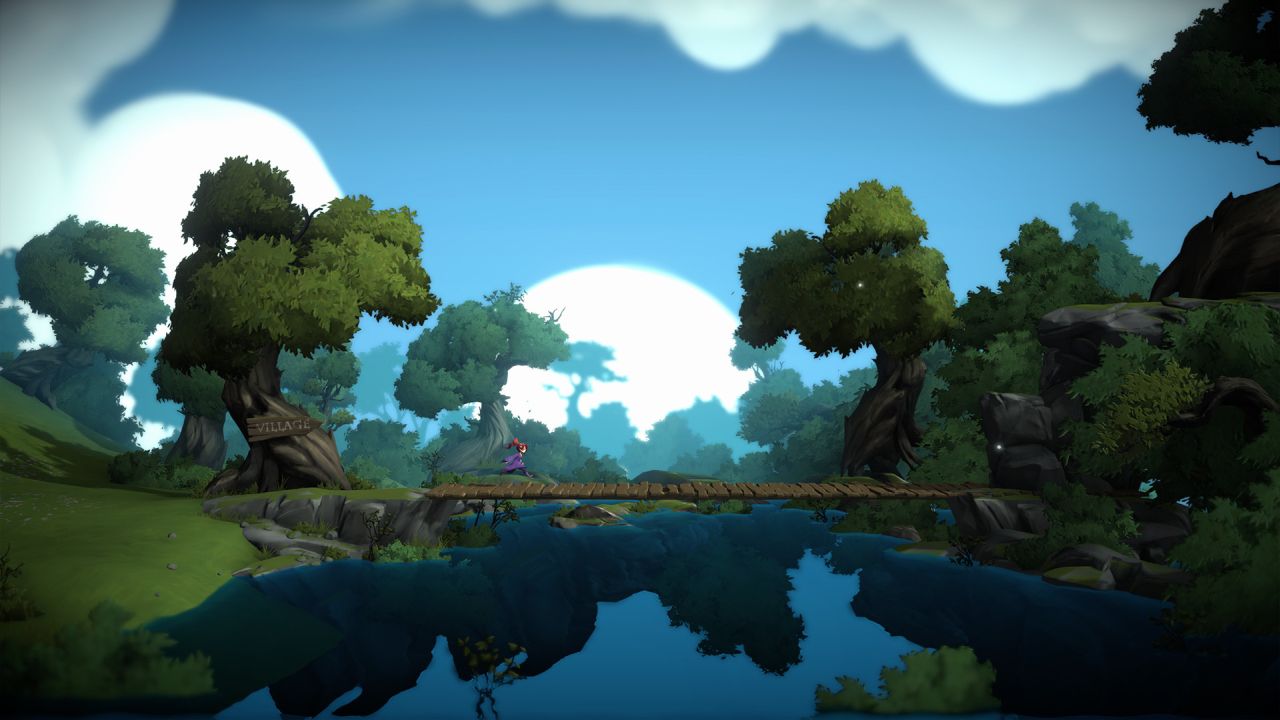 The visuals are similarly split – the action that takes place on the pages of the journal works, as minimalistic as it is, and occasionally offers some nice fully-drawn scenes. In the 3D adventure world however, the game looks very barebones and dated, like it was put together with a very low budget. The animations are lacking, the art design is entirely forgettable, and the texture and effect quality looks quite low. Despite these low quality visuals, the game is unable to maintain a steady framerate on the base model PS4. It's never bad enough to be game breaking, but is consistently irritable.

While playing, drafting up notes, and writing this very review, it was easy to constantly forget the name of this game. Lost Words: Beyond the Page is such a generic phrase that it so easily escapes the mind, and in truth, so does the actual experience. There is little to compliment in the title's mechanics, and if it were a bit more brave or had a stronger narrative, it may have gotten away with simply being a narrative exploration game - and one that focused squarely on the real world, instead of the fantasy novel. But even so, the story wouldn't be able to carry the experience on its own, with the uneven writing, voice acting, and rough pacing of the delivery. There may be something that players with certain life experiences would be able to relate to here, but at least even if you don't, the game's low $15 price tag doesn't sting much.

Our ratings for Lost Words: Beyond the Page on PlayStation 4 out of 100 (Ratings FAQ)
Presentation
60
Lost Words offers a presentation that's on par with its low price - but the soundtrack is a welcome standout.
Gameplay
40
There's very little worthwhile gameplay here - and the experience would have possibly benefitted from simply being an exploration experience rather than trying to follow traditional formulas poorly.
Single Player
60
The writing and voice acting are very hit and miss - aside from a few memorable and dramatic moments, the rest of the narrative is uneven. Memorable moments are few and far between.
Multiplayer
NR
Performance
60
For a game with such basic presentation, the unsteady framerate is disappointing to see.
Overall
58
Lost Words: Beyond the Page ends up being as forgettable as its name. Outside of just a few brief highlights, the rest of the story is filled with inconsistencies and dull gameplay. The accessible price point is one of its few redeeming qualities.

Lost Words: Beyond the Page 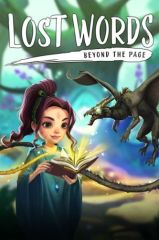 Lost Words: Beyond the Page
8 images added 301 days ago