I'll get to this upfront - I'm not a huge fan of roguelikes and I'm not a huge fan of deck-building games, but I like Loop Hero. I like it a lot. Loop Hero doesn't really do much to push against the mechanical constraints of its genre, wearing the cyclical playstyle in its title as a badge of honor. Yes, you're going to be doing the same thing a lot in this game, yes it will probably start to get old, but as you break through the different layers of Loop Hero, one can't help but be intrigued by the unique styling of the mechanics. Loop Hero has so many things going on under the hood, so much that it doesn't tell you, your trips around the loop turn from experiments into carefully constructed journeys. I can safely say, while I do think the game would benefit from surfacing more of its details, there is nothing quite like Loop Hero. 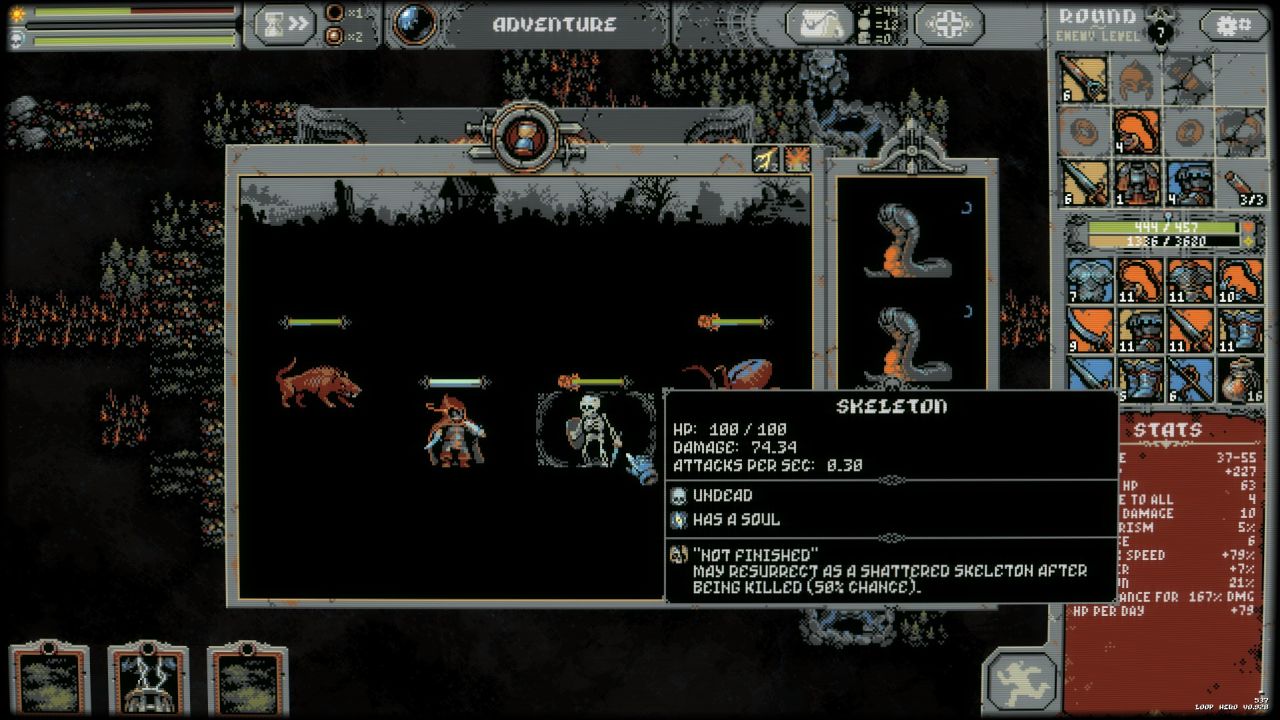 The game begins with the titular hero's world being destroyed by an evil skeleton wizard. Trapped in the cold void of nothingness, the hero begins to follow a circular path where they encounter creatures and people from the world that was - or maybe another world that was lost? While everyone the hero encounters recalls a destroyed world, they each have different memories of what was lost and who was to blame. The narrative is sparse, but the dialogue is well written. In some ways, it's better than the game deserves. Upon dying, there's so much emphasis to getting back into the world and grinding up the content, that the story can sometimes have trouble resonating. While the narrative isn't compelling, the themes are a strong compliment to the gameplay. Also, as you reach later stages of the game, there is some lore that begins to unfold, adding more context to the world - a reward for players who invest the dozens of hours required to fully explore the nooks and crannies of Loop Hero.

Much like Super Giant's Hades last year, Loop Hero explores weaving narrative into its roguelike mechanics, instead of concocting a flimsy excuse to justify them and passing it off as plot. The game has a beguiling comfort that encourages players to engage in one more loop time and time again, though I do think that as the game progresses, it begins to crumble under the weight of each playthrough.

What's most interesting about Loop Hero is its gameplay. You begin each run by starting an expedition. Again, your character is just wandering in a circular path randomly generated at the start. The path starts empty with green slimes that are easily killed. All combat is simulated with AI controlling the attacks of the player character. Once defeated, the slimes yield basic equipment and cards that can be played to either acquire resources or add buildings/locations to the loop like graveyards, battlefields, or vampire mansions. The location cards will add enemies and rewards for you to collect on future runs. This leads to you basically building your own challenge as you go, adding different locations with different enemies. The more difficult enemies get added to the loop, the better loot you'll get to strengthen your character. Sometimes adding a certain number of cards will result in a new kind of enemy. Placing rock cards in a specific formation will trigger the arrival of harpies, enough of a certain card will create goblin camps or bandit camps. Learning what cards will trigger certain results is important. After you've played enough cards, a boss character will appear. Aside from being harder to kill and dolling out more loot, they aren't too different from regular enemies.

As you might have surmised, a lot of the game is planning where you'll put your cards and min/maxing for more loot and surviving enemies. However, there is progression that you'll earn between runs. At the end of each run you'll return to camp where you can construct buildings, upgrade them, and eventually craft materials. Building, upgrading, and crafting can help you when you're out on the loop. Potions can restore your health, a smithy can help you start with better gear, some buildings might allow you to choose different starting classes. This can also open up new cards to be played while on an expedition, on the loop. The progression is an important part of the game, but so is knowing when to quit. If you die on the loop, you bring back only a fraction of the materials you've acquired. If you retreat to camp in the middle of the loop you keep more resources, but not all. The best thing to do is admit you've barely survived and end your expedition when reaching the camp icon on the loop. This creates a risk/reward on expeditions. You never know when the difficulty of the loop might ramp up and you'll lose so much of what you've earned, but if the last loop was easy why not try another one to see if you can get more resources?

The rhythm of the game can get under your skin, driving you to play loop after loop, expedition after expedition. Returning to camp and unlocking materials feels rewarding. It's an excellent flow to the game that is bound to enchant players. However, while the early runs are fairly quick and easy to complete, runs later in the game tend to drag on. It can lead to you spending two hours on a run as you acquire cards and buildings. This wouldn't be a problem if you could save progress during a run, but you can't, so you're potentially locked in for hours at a time. It interrupts the flow of the game in a frustrating way. It can also get a bit grindy in the later stages, constantly sending you back on expeditions with little reward. The late game really isn't for the faint of heart. This also comes through in the obscure way the game divulges information. So much of the details are revealed through experiments or digging into fan wikis or guides. For some, this might be a treat, the communal way of experiencing a game filled with secrets - others might find it annoying.

The late-game grind might have been helped if there was more to engage with aesthetic-wise. There's a fun little chip-tune soundtrack, and the DOS-era pixel art sets a strange and interesting tone, but it all gets a little old once you're more than twenty hours in. I found myself muting the game before long and becoming disengaged with the style, overall.

I think this is a little emblematic of a larger issue with Loop Hero. It's not really meant to be played on PC. Playing the game in fits and starts on a Switch or on your phone would really be the best experience, but trying to engage with it for hours on end at a PC is a big ask. Luckily, it'll run on just about any PC so I had the game on my laptop and could grind it while on the couch. It's the kind of game you'll want to play while binging a TV show or during the commercials of a basketball game.

Loop Hero is a fascinating game and incredibly well-designed. Going out on expeditions and seeing how many times you can work your way around the loop is mesmerizing. I stressed about where I'd play my cards and how it would affect my game, I nervously pushed my hero around the loop, worried they may die on the road. Roguelikes succeed and fail by how well they can entice you into one more run, and Loop Hero does that effectively. Even late at night, I found myself constantly talking myself into one more run, one more expedition. There's so much tension in these runs, the feeling that a mis-played card could lead to a death that costs you valuable resources and a thrill of victory when I slew a boss or returned to camp with precious materials. I wish the style engaged me more, or that it was a little less demanding of my time, but I can't deny that the game is a fascinating exploration of the roguelike genre. Loop Hero may not end up being your favorite game this year, but it just might be one of the most unique.

Our ratings for Loop Hero on PC out of 100 (Ratings FAQ)
Presentation
65
The swaths of black and simple pixel-art evoke a cosmic tone that works for Loop Hero, but I did tire of the aesthetic by the end.
Gameplay
85
Loop Hero is brilliant in its core design. You're not controlling the hero so much as you're influencing their journey, a nuanced take on roguelikes.
Single Player
80
The narrative is well written and sparse, the progression is obsessively compelling. My only complaint would be that the length of runs works against the game's mechanics. The game is begging to be put on a portable platform that is more suited to a pause/resume style of gameplay.
Multiplayer
NR
None
Performance
(Show PC Specs)
CPU: Intel Core i5-3570K
GPU: Nvidia GeForce GTX 660
RAM: 8GB
OS: Windows 10 Home

75
No tech issues, but the long sessions towards the end are not fun as you're stuck in front of your PC.
Overall
79
The core gameplay mechanics of Loop Hero are exceptional. There's something that is devilishly interesting about it, drawing you back into every run. It's the kind of game that you always want to play again. However, the grind can get tiresome and playing on PC is not an ideal setting for the late campaign marathon sessions. 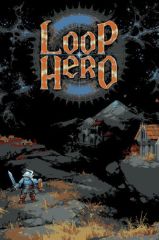