When Yacht Club Games released Shovel Knight back in 2014, it took the gaming world by storm with its addictive gameplay, impressive pixel art style and simple but engaging story. Yacht Club Games had made a name for themselves, and fans of the developer were keen to see what they'd conjure up next. While they haven't released a new title yet, they have since published Cyber Shadow, an incredibly stylish 8-bit action platforming adventure that looks and feels reminiscent of their work. Cyber Shadow doesn't just do an admirable job with its look, but also its soundtrack, gameplay, and fair but fun difficulty. What perhaps is most impressive, is the fact that the game was developed by a single person, Aarne Hunziker of Mechanical Head Studios. Cyber Shadow is a great first step for the indie dev, with the game feeling like a welcome amalgamation of NES classics Ninja Gaiden and Mega Man. 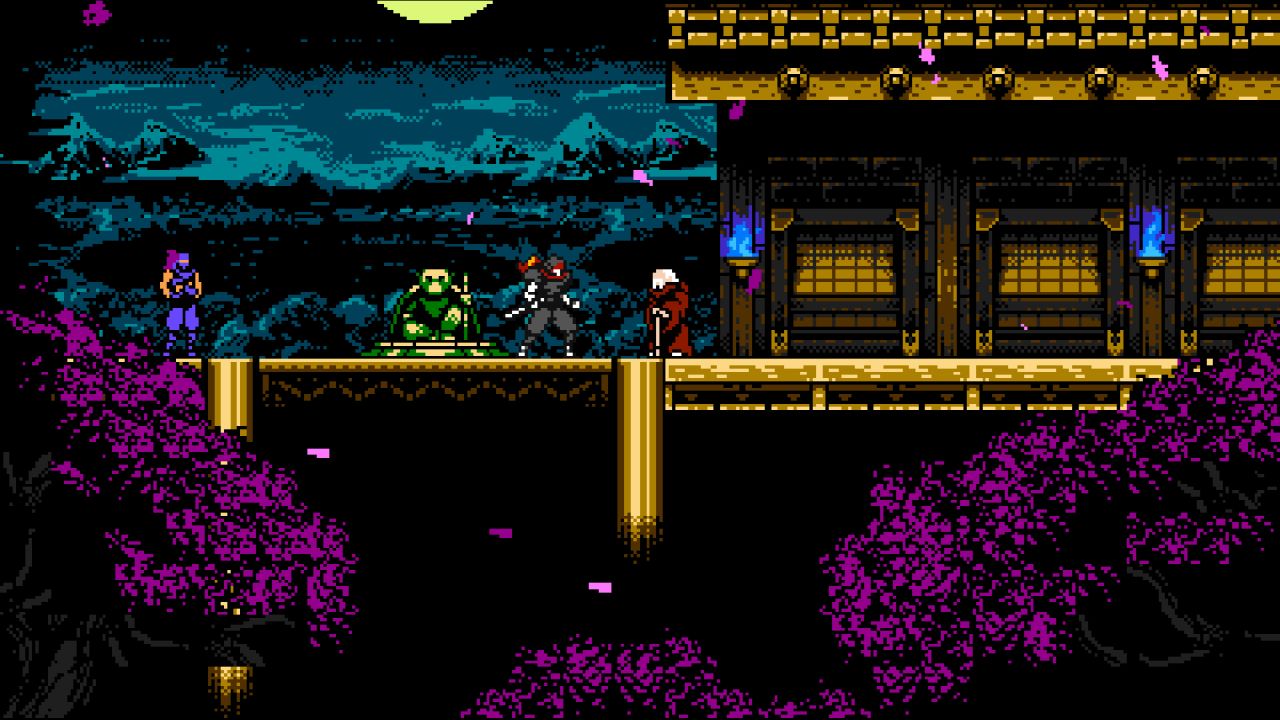 The story begins with our titular hero Shadow being awoken from stasis by L-gion, a cute little bot who happens to be the aid of the duo's master. L-gion tells Shadow that their master is in need of help, so the two head off towards Mekacity in the hopes of rescuing her. From here Shadow comes to learn that Dr. Progen, the creator of his cybernetic clan, has been holding his allies captive, so the journey for him quickly becomes clear; rescue his master and defeat his creator. The story does a decent job, but it struggles to peak enough to hold your interest long enough. Characters are undeveloped and the lore of the world while explained more than I thought it would be in a game like this, just isn't fascinating enough to garner much fanfare. You likely won't skip the dialogue boxes or turn a blind eye to the fantastic 8-bit cutscenes, but at the same time, the narrative of Cyber Shadow isn't going to blow you away. It does okay without ever being great.

While the narrative leaves much to be desired, almost everything else is well made. The 8-bit visuals exhibit plenty of detail, with excellent sprite work and highly detailed backgrounds resulting in a style that looks particularly impressive. This attention to detail extends to the aforementioned 8-bit cutscenes, which look absolutely badass. Also impressive in Cyber Shadow is its soundtrack. Whether it be intense boss battles or simply making your way through a level, the music feels at home alongside the cybernetic ninja aesthetic, succeeding in amplifying the fun of slicing and dicing robots with Shadow's katana and other weapons. The story may not be enough on its own to draw you into the world of Cyber Shadow, but the killer pairing of the excellent chiptune soundtrack and the intricate 8-bit art style prove capable of keeping you visibly and audibly enamored. 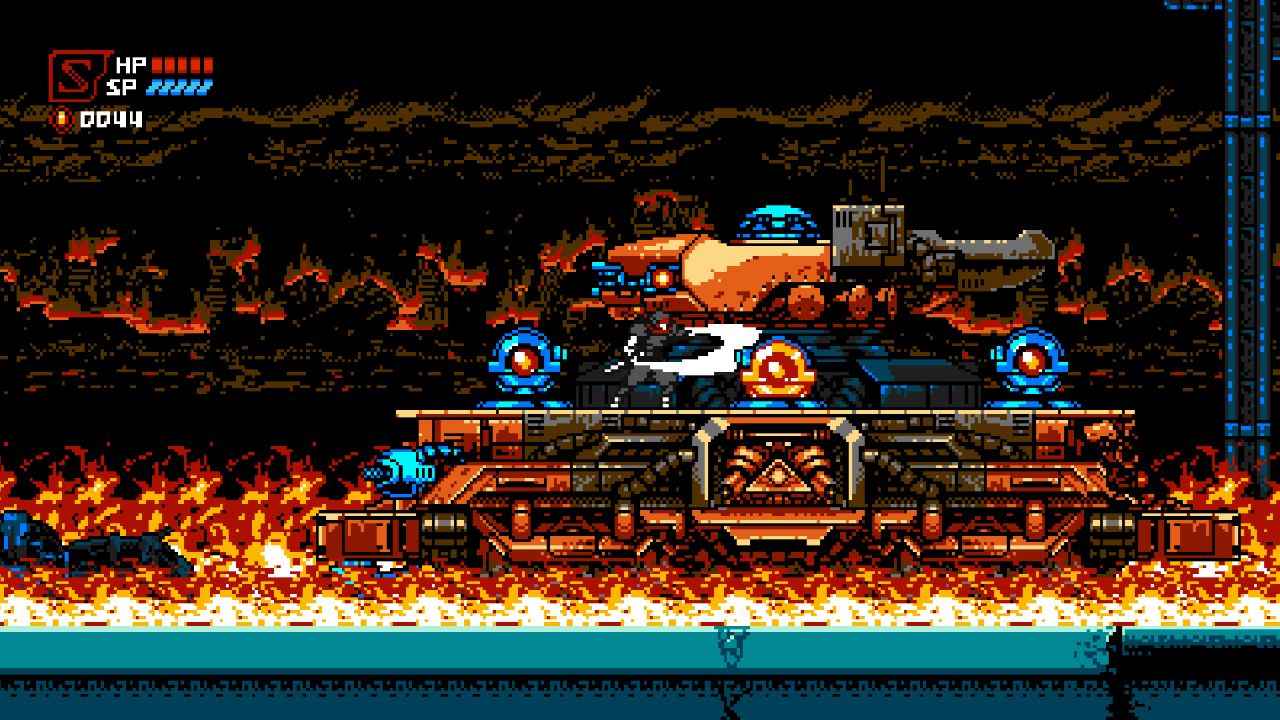 Much like the pretty visuals and solid soundtrack, Cyber Shadow's gameplay is also quality, albeit with a few disappointing chinks in its cybernetic armour. As Shadow, you make your way through numerous linear levels, eviscerating anything (whether it be synthetic lifeforms or vehicles like a tank) that gets in your way with your available arsenal. Shadow is initially only equipped with a basic jump and his trusty katana, but as you progress throughout the game, the synthetic ninja will get a hold of various other toys and abilities for you to tinker with, such as shuriken, a down slash attack and the game changing wall jump. New abilities and items are consistently given throughout the roughly 7-8 hour experience, ensuring that the gameplay never gets stale and tedious. In saying that, the feeling of spamming your katana attack as you run through levels never gets old.

Fallen foes will often drop orange orbs known as essence, an important currency that can be spent at checkpoints to buy special items (such as a longer ranged katana slash), or to refill your health or spirit points. Spirit points are denoted by the blue bar beneath your health, and will deplete if you use special attacks such as the shuriken or the rising fire attack. You can stumble upon health and spirit drops within levels, but spending some essence at a checkpoint is often the best way to prep yourself for the upcoming boss fight or busy room full of annoying enemies. Speaking of boss fights, they are numerous in Cyber Shadow, with each providing a challenging but enjoyable experience. Seeing the enemies' health bars deplete as you frantically spam them with the remaining spirit points you have alongside some swipes with your trusty katana is just such a satisfying time. 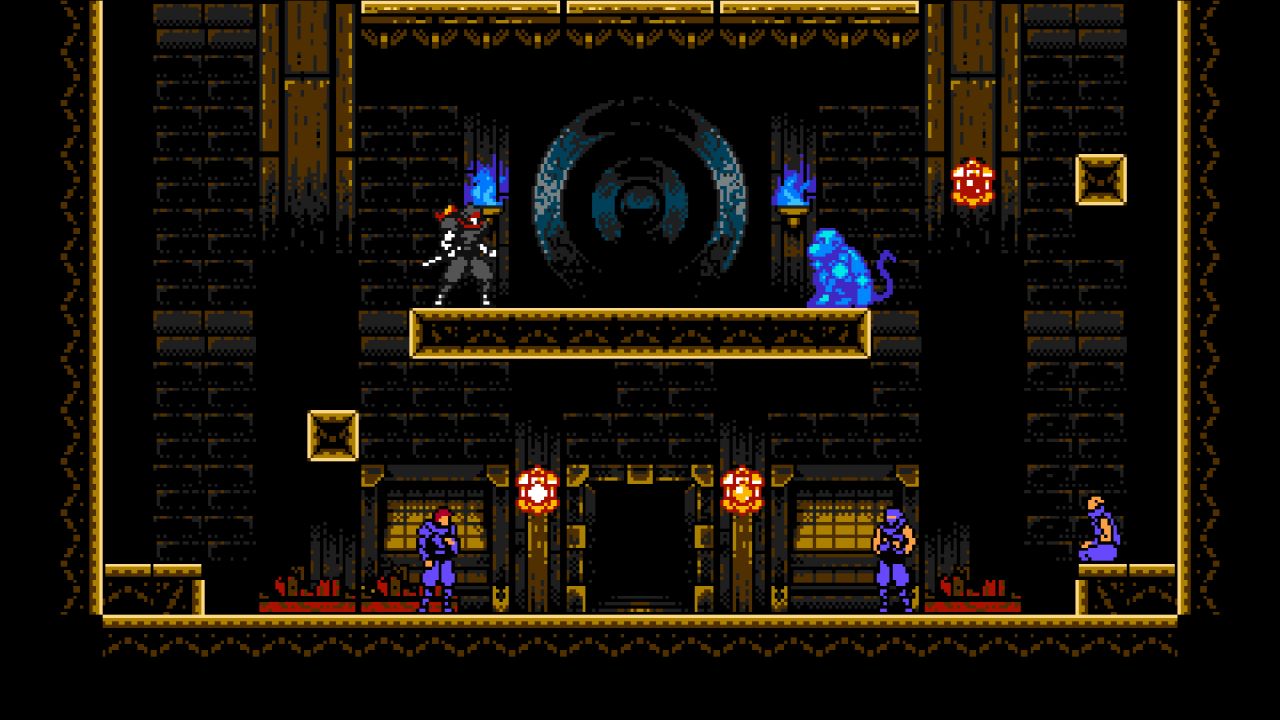 The fact that Cyber Shadow feels so satisfying to play is because of how well the game controls, for the most part at least. From the platforming to the combat, it offers a great experience that is constantly giving you more attacks and traversal mechanics to try out. The only issue with Cyber Shadow's controls is the fact that they are pretty much entirely limited to the d-pad and two face buttons. It's easy to assume this design choice was done to emulate an NES control scheme, and while it sticks true to the retro vibe this game proudly emanates, it leads to many frustrating moments where the controls can let you down. The parry is a great example of a move that suffers from the limited controls. When executed, it is particularly satisfying, letting you stop enemy projectiles and joyfully fling them back. However, it is mapped to the d-pad, the buttons you are also using to move. More often than not you will be able to land the parry as intended, but sometimes you end up walking directly into a bullet your parry should've handled. This issue extends to the sprinting ability you gain towards the end of the game. It requires a double tap of the d-pad in the direction you are running, which sounds fine but leads to numerous moments where an attempt run fails and you fall into a pit of spikes. Again, it doesn't always happen, but when it does it is really annoying, especially when paired with an already difficult gameplay experience. The controls are still great, but the decision not to spread them out over the available buttons feels like a decision that only hinders what is otherwise an admirable job of letting one assume the role of a badass cybernetic ninja.

Like the games of the era that inspired it, Cyber Shadow is a game that takes pride in its difficulty. While the difficulty teeters the line between fair and unfair, modern sensibilities such as numerous checkpoints and infinite lives push Cyber Shadow more in the frustrating but fair category. Some moments will make you want to pull your hair out in anger, whether it be a tricky platforming segment littered with instant death spikes or the fact that the next checkpoint feels agonizingly far away, but the difficulty remains just for the most part. Fair or not, Cyber Shadow gets really tough, especially in the latter half of the game. Tricky moments such as having to defeat a multi-stage boss battle with only one bar of health felt cruel initially, but committing time and patience into learning the patterns of the fight led to a near perfect run that elicited feelings of immense joy and fulfillment, something that likely would've been missed if it weren't for that high degree of difficulty. The unabashed toughness of Cyber Shadow feels reminiscent of experiences felt with infamously difficult NES classics, yet at the same time the modern day additions such as infinite lives and checkpoints ensure that the experience still feels fair. 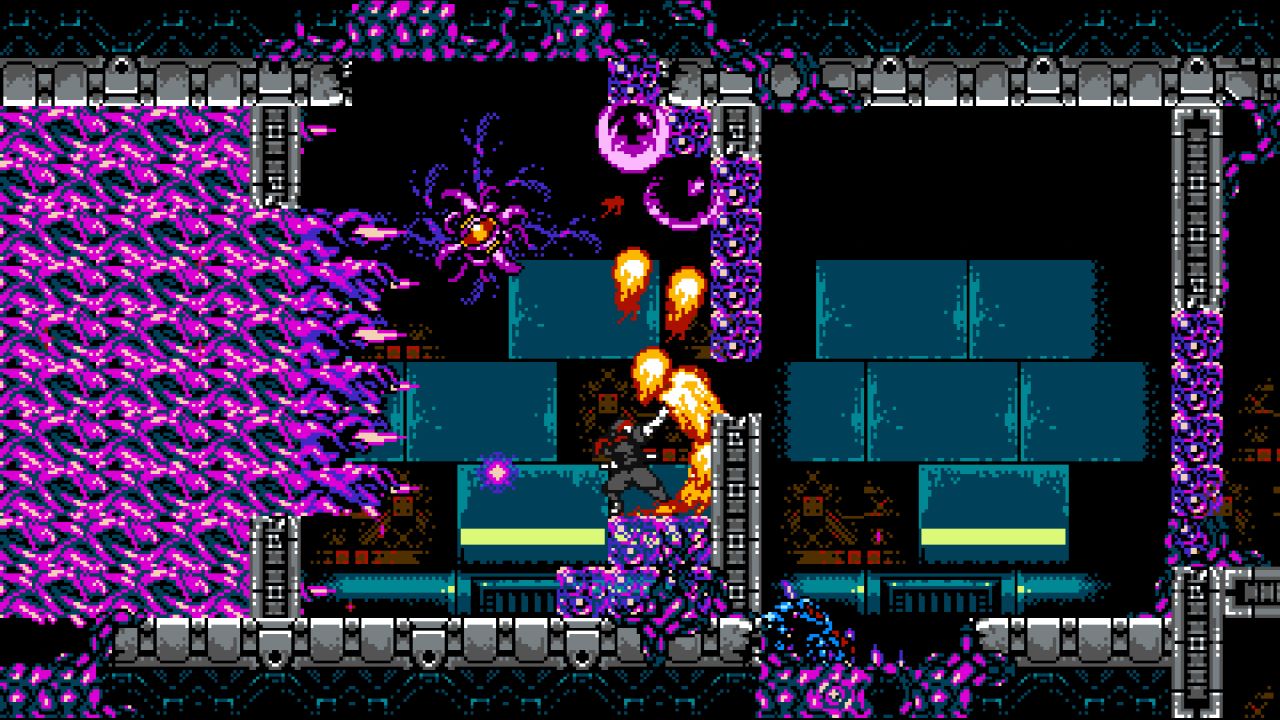 If you were to fuse Mega Man and Ninja Gaiden together, the resultant product would be Cyber Shadow. It's tough and unforgiving with its difficulty, but it provides you with the toolset to get the job done, leading to a fair experience that feels intense and rewarding. The story may not stick with you past the game's conclusion, and the decision to map the controls to mimic an NES control style at the expense of comfort is frustrating, but Cyber Shadow is still a notable action-platformer that oozes style and is worthy of a shot.

Our ratings for Cyber Shadow on PlayStation 4 out of 100 (Ratings FAQ)
Presentation
85
Detailed 8-bit art style paired with impressive animations and sprite work. Soundtrack is fantastic from start to finish.
Gameplay
75
Platforming and Combat feel really good for the most part. The decision to map all controls to a few buttons does somewhat hinder the experience.
Single Player
60
There is a story being told but it isn't overly interesting or gripping. Levels feel inherently replayable despite their linear nature.
Multiplayer
NR
None
Performance
90
No issues observed
Overall
75
Cyber Shadow is the exciting product of melding memorable NES classics such as Mega Man and Ninja Gaiden. It's difficult and frustrating at times, but the stylish 8-bit look, bopping soundtrack and enjoyable gameplay result in a quality action-platformer. 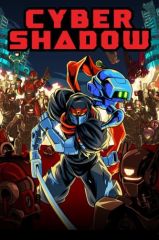