A Strange Man in a Stranger Land

I'll admit: the premise of a magical harpoon sounded just a tad outlandish to me. Like something out of a Victorian-era novel or a B-movie that was lost to time. A plot device that could have veered into some truly ridiculous moments. And yet, there's nothing silly about Olija, the latest effort from Skeleton Crew Studio. In the hands of the tiny team, the mystical weapon is not a crutch the title relies on, but rather one that proves to be a compliment to the setting. 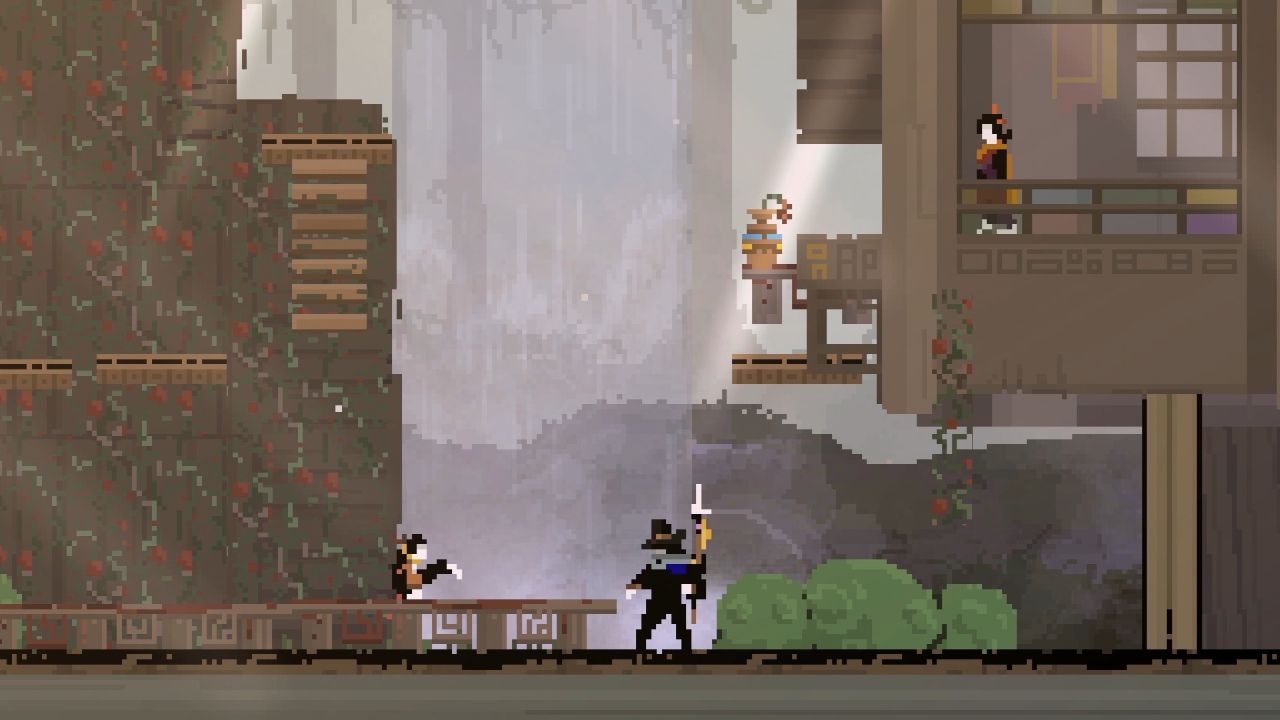 Olija begins with something that seems incredibly common for the setting: a ship being destroyed, and a crew getting scuttled among the wreckage. Faraday, the captain of the ship, finds himself in uncharted waters, so to speak. He is trapped amongst the Terraphage, a series of smaller islands in a strange realm. And you can tell it is a strange place because he immediately encounters gross, ooze-like creatures. Although capable enough with his hands, Faraday's luck begins to turn when he comes upon an ancient harpoon. A powerful weapon, he will need to use this tool to not only save himself and his crew, but also to return to his own world.

Ultimately the hook of the story is one that is quite familiar. A stranger in a mysterious land just trying to make it home. However, how the story is relayed to you is what makes it intriguing. Doled out largely through dialogue from a pair of wizened storytellers, you need to dig a bit to truly learn about Faraday and the Terraphage. Between the purposely vague visual designs and cryptic speeches, the history of this world and Faraday's role in it can be tough to decipher. Pay attention, though, and you'll uncover an intriguing universe that I wish we got to explore even further. It feels like you're just beginning to scratch the surface when you reach the endgame.

At first glance, Olija has the look of a Metroidvania with challenging encounters spread throughout. At least, that's what I expected from the title when I first spotted the trailer for it. In truth, the game is more of a cinematic platformer than anything else. The individual islands of the Terraphage have their own unique moments and layouts. As you explore each of them, you'll come across different caverns and buildings that often house necessary goods. While there are secrets to be found, the path through these locales is more linear than you would expect. What may have looked like a sprawling world at one point often boils down to a singular path to take. 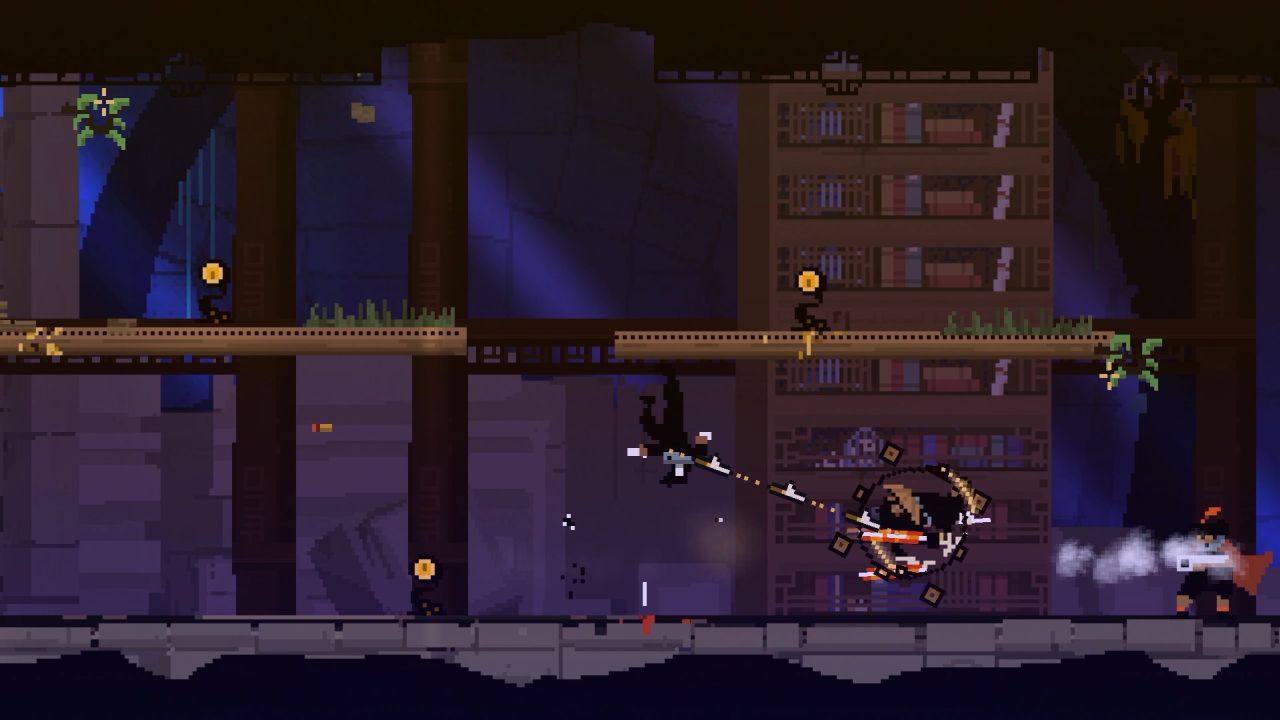 For the most part, I'm okay with the narrow focus the title ends up having. Rather than forcing you to wade through certain sections repeatedly, you are always instead pushed towards moving the story forward. This means that the adventure and thrills found within it never let up. That, combined with the brief length of the tale, allows for it to never become dull. I'll take a title with short length, but excellent pacing, over a longer title, but one that drags, every time. The one issue I have is that certain dungeons do become inaccessible after completing whatever main task needed to be taken care of. This means that any extras that you could have come across are locked up for good. Even if most wouldn't bother with doing so, having the ability to return to these areas would have been appreciated.

As mentioned, Faraday has plenty of ways to approach encounters, but the harpoon is often the best option. Capable of doling out damage from both short and long distances, the mystical weapon is a beast of a tool. Faraday can toss the weapon in all directions, and then either choose to teleport to it himself, or recall it back. In addition to the harpoon, Faraday also acquires four different side-weapons that improve his arsenal significantly. These are two different swords, and two different firearms.

The combat of Olija shines when you mess around with the different tools at your disposal. Learning how to properly chain together the maneuvers granted through the harpoon and Faraday's side-weapons is the best way to spice up the combat. If you play it straight, though, you may find yourself bored by most of the encounters. The minions thrown at you across the Terraphage rarely put up a challenge. There's often little strategy to their actions and are just as likely to fall to their deaths as they are of killing you. A surprising lack of enemy variety was also a disappointing development as I progressed through the campaign. Either improved AI or additional baddies would have gone a long way towards giving the battles greater variety. 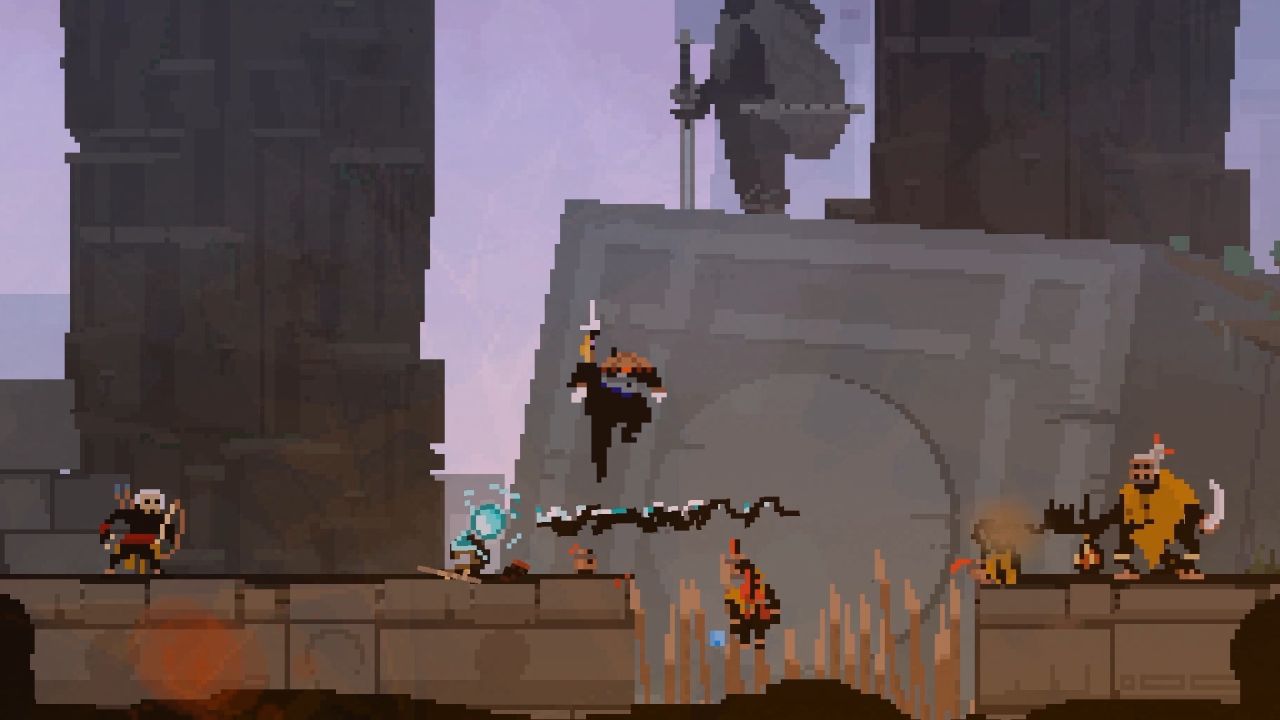 It's unfortunate that the main combat sections are as meandering as they are, because the boss battles created by the studio are great. They are intense, layered, and each of them provides a different kind of challenge. An early encounter has you dodging the throwing knives of a ghastly creature, while a later one has you dueling against an expert swordsman. Although none of them are particularly difficult, they are enjoyable, nonetheless. That's why it would have been nice to see the creativity during these segments applied to the other more basic portions of the title. It would have given the the gameplay more flavor and made for a better lasting experience.

In addition to being Faraday's main weapon, the harpoon also serves as a necessary tool for traversal. By spearing these glob-like objects around the world, he can either propel himself further, or create a platform to stand upon. The teleportation ability that comes with the harpoon also comes into play for some of the puzzles of the game. One of the later side-weapons you come across, a broadsword, also can activate specific switches. You'll come across segments that require you to use the two in tandem with one another to move forward. I don't think any of the acrobatic segments that make use of the harpoon, or the puzzles are challenging, but they do add another wrinkle to the gameplay.

Arguably the strongest aspect of Olija is the excellent visual design of the title. Each island in the Terraphage has its own captivating appearance, and details strewn across each of them really help build up the world. A place of worship you come across may help build up a side-character's role in the story, or a cavern filled with skeletons goes a long way towards spelling out the danger you are in. The character sprites are lacking in detail, but this was most likely done on purpose. When the plot calls for Faraday or someone else to show emotion, you'll get a close-in on their face. The soundtrack may not be as memorable, but it does generally fit the tone and atmosphere of the adventure. 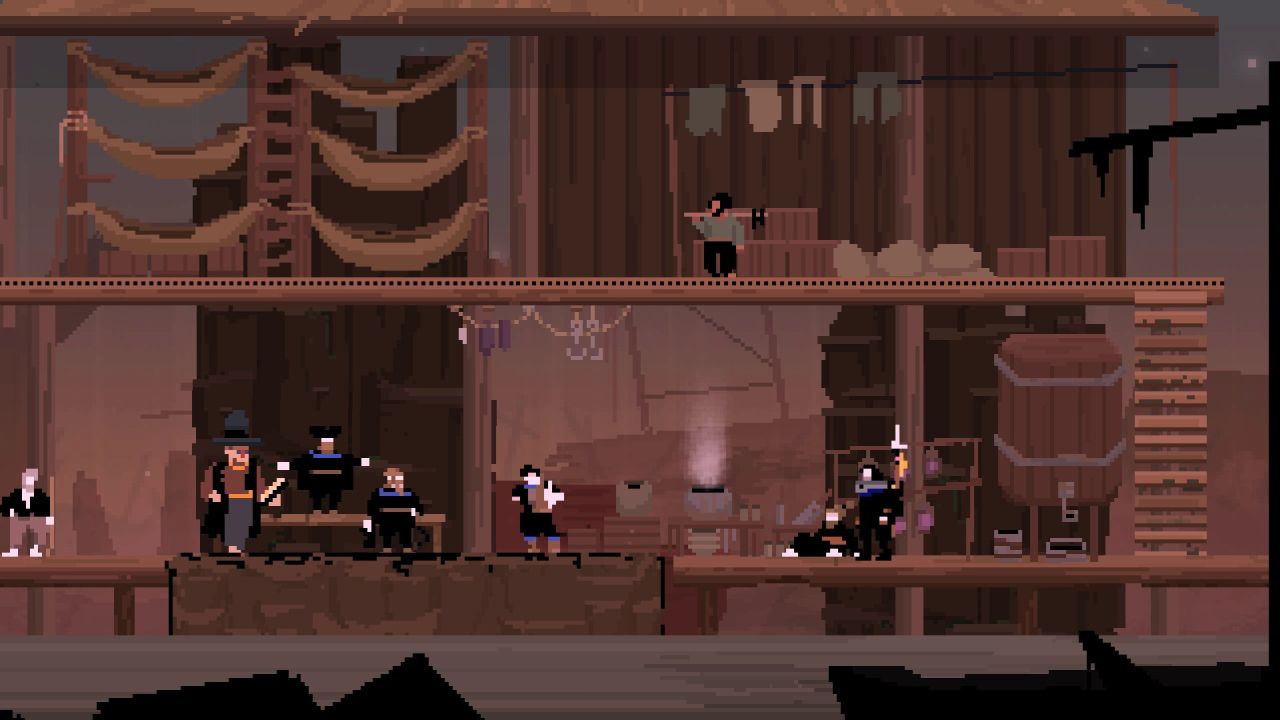 If this review was written prior to the day one patch going out, I would have hammered Olija for its numerous technical faults. Visual inconsistencies were a common occurrence, and the title locked up more than once for me. At the end of the game, for example, it froze three different times. However, the patch seemingly covered up most of these issues. The various missing pieces of art have been added back in, and the title did not lock up on me during my second playthrough. Could there still be issues out there? Of course. However, I can't deny that the technical problems of the title haven't been significantly cleaned up.

With an intriguing narrative and eye-catching visuals, Olija has the appearance of a fresh and exciting adventure. Coming in at less than five hours, the title never overstays its welcome, and remains interesting throughout. And while the moment to moment combat could have used some freshening up, the gameplay is tight and enjoyable. It won't provide the stiffest of challenges, but the beguiling plot and sense of style more than makes up for that.

Our ratings for Olija on Xbox One out of 100 (Ratings FAQ)
Presentation
76
The islands of the Terraphage are beautifully designed. They brim with personality and help flesh out the world of the title. The soundtrack is suitable, but forgettable.
Gameplay
68
The combat and platforming is fine enough, but the lack of variety in the regular combat encounters is apparent. Despite being given the tools to do so, you rarely need to use all of them.
Single Player
75
Although minimalist in parts, the mysterious world of the title is well worth exploring. The tight pacing of the title also helps by constantly pushing the narrative forward.
Multiplayer
NR
None
Performance
70
The release of the day one patch has definitely improved things, but I can't say for sure that every issue has been fixed.
Overall
72
Olija is a unique platforming experience that will captivate from start to finish. Faraday's journey takes you to an intriguing world that has as many mysteries as it does scenic vistas. It may get tedious in parts, but the limited run-time of the title helps it stay mostly on track. 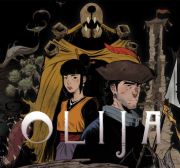 All videos for Olija (2)
Advertisement ▼