RAGE is an upcoming first-person action game in development by id Software. It will use the company's new id Tech 5 engine. This being the first original IP in over 10 years for the company, the expectations are high. The game takes place in a post-apocalyptic setting, where many humans have gone crazy. The game includes both elements of shooting and driving, and the emphasis of the development team is to provide non-stop action, even when driving between locales. During this year’s E3, we dropped by the by-appointment-only Bethesda Softworks booth and had a closer look at the game.
The basic premise of the story in RAGE is that an asteroid has set its course to collide with Earth. In order to save the civilization, scientists have created capsules into which they placed random members of the human race. Once the asteroid has crashed and most of the living world is destroyed, those in capsules were meant to resurface and begin the rebuilding process. However, something has gone wrong with those who re-appeared after the catastrophe. As one of such survivors, the player must now quickly learn about the newly developing world and adapt in order to survive. The game is using cel-shaded graphical style, that similar to Borderlands, while still retaining a realistic look. The textures and human characters look realistic, and the game is promised to run at 60fps on all platforms – the demo that was being shown ran on Xbox 360. 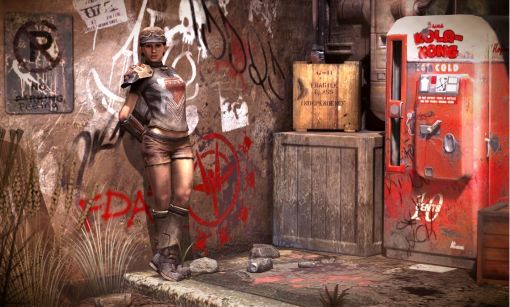 The first bit of gameplay shown revolved around travelling to a town. To do so, the player hopped into their buggy and drove off. The buggy in the game is your own, and can be upgraded over the course of the game, from a simple four-wheeler to a heavy battle roadster. On the way to the destination, we encountered an enemy vehicle which was quickly dispatched with the mounted machine guns. Having finally arrived in the town, the style of the game once again took center stage. The locale looked abandoned; a half-destroyed city that still had inhabitants, who looked like true survivors of the apocalypse. It was noted by the developer that when attempting quests, the outcome affects the player’s relationship with the whole town – not just the quest NPC – giving your decisions that much more weight.
Underneath the city, we entered the well. This level was all about showcasing the gun fights and various types of ammo available. As the player made their way though small, shadowy underground tunnels, we encountered many aggressive enemies who got dispatch by our shotguns, assault rifles and the crossbow. The crossbow also had another ammo type, the electrical bolt, which worked wonders of dispatching groups of enemies standing in a puddle of water. There was also a chance to demonstrate the game’s stationary and remote controlled turrets, which are great for both defence and attack options. 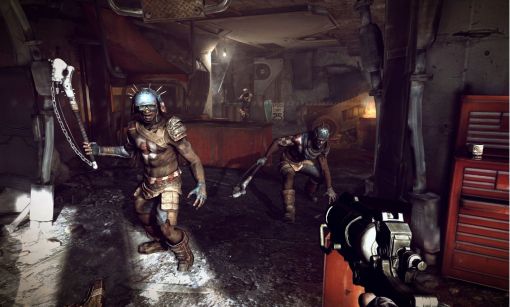 In the next level, the player found themselves in a garage, fighting through some close-quarters encounters in order to reach an upgrade part at the end of the linear set of hallways. Of note, the player in the game cannot use cover, while enemies are commonly found hiding behind various objects in the game environment. All of the dead bodies can be looted for various goodies, but in the demo those items were limited to ammo. After making it outside, it was time for a boss battle. A huge enemy came crashing through an abandoned building, immediately setting his sights on us. As the player began unloading endless clips of ammo into the boss, numerous smaller enemies started appearing around the level and became a general annoyance. However, a handy rocket launcher was available that brought down the giant in just two rocket shots. As we began looting the bodies in the area, a terrifying sound echoed through the buildings. Yet another monster crashed into view, this one almost double the size of the enemy boss we just defeated. But alas, the demo ended there.
RAGE is a game that attempts to carve out its own space in a genre already taken up by Fallout and Borderlands. Both those titles have space for improvement, and RAGE has more than enough potential to fill the void and create yet another excellent post-apocalyptic title. Through the demo, we got to see all of the basic action mechanics of the game as well as the great visuals of the new engine. Things look very promising for this title, but only time will tell if RAGE is able to stand its ground against the inevitable comparisons to other established franchises in the genre.

Our Review of Rage
68%
Adequate
Reviewed on PC
"Solid shooting and sophisticated enemy AI are all but drowned below bland filler content and significant technical issues"
Game Ranking
Rage (PC) is ranked #1262 out of 1840 total reviewed games. It is ranked #97 out of 105 games reviewed in 2011.
1261. Alan Wake
Xbox 360
1262. Rage