It's fair to say that when The Legend of Zelda: Breath of the Wild released on Nintendo Switch and Wii U (rest in peace my sweet child) in 2017, it quickly became one of the most critically acclaimed titles of all time. Its seemingly boundless open world that begged to be explored and its non-linear approach to progression won over not only gamers, but also developers, who were keen to replicate the same sort of feeling to projects of their own. Genshin Impact and The Pathless are just some examples of releases this year that are clearly inspired (to varying degrees) by Breath of the Wild. 2020 is finally thankfully coming to close, but we've got one more Breath of the Wild-esque experience to tinker with in the form of Immortals Fenyx Rising. While it borrows many of its ideas from Breath of the Wild to the point where you wonder how it's legal, it does a solid job at impressing with its own additions such as engaging combat and a lighthearted narrative about Greek mythology. 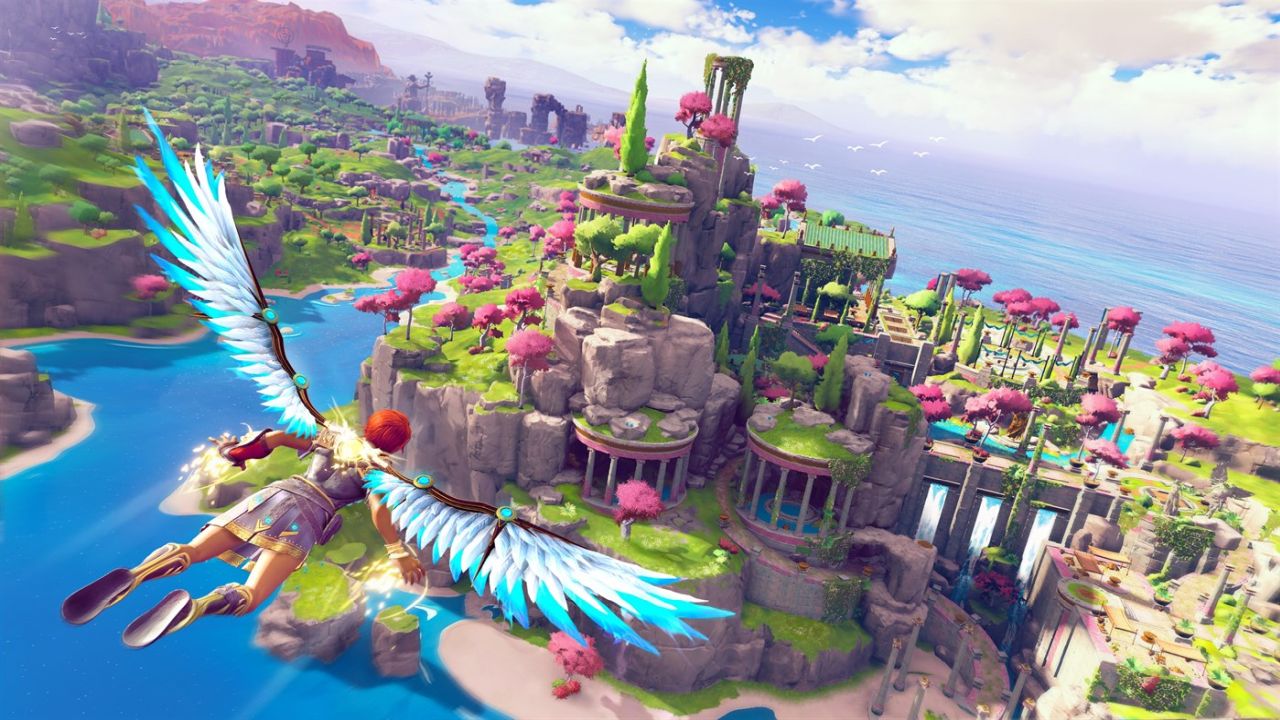 The story of Immortals Fenyx Rising takes place in the Golden Isles, a colorful and picturesque location that has recently fallen upon hard times. Destroyer of Gods Typhon has broken free from his prison and is wreaking havoc throughout the Isles, littering the land with dangerous mythical beasts, stealing away the essences of Gods and leaving them complete opposites of their former selves, and turning the mortal inhabitants to stone. Zeus, the God responsible for imprisoning Typhon beneath the Earth, manages to escape and quickly heads to Prometheus (another individual he is responsible for locking up) for help. Having the power of foresight at his disposal, Prometheus makes a bet with Zeus instead of offering his hand to defeat Typhon. If Typhon is defeated by a mortal, Zeus must let him go free, otherwise he will agree to assist Zeus in stopping Typhon. Prometheus then begins to tell the tale of Fenyx, a young mortal who washes up on the island from a shipwreck and quickly becomes the only hope the world has of stopping Typhon from conjoining the mortal world and the afterlife to create a world of his own design. After seeing her brother and fellow soldiers turned to stone, Fenyx agrees to take the fight to Typhon by tracking down the defeated Gods and reuniting them with their essences.

Having the story almost constantly narrated by Prometheus with the brief interruption from Zeus works surprisingly well, as the two play off each other in a way that always keeps the dialogue fresh and funny. The dialogue maintains its lighthearted nature throughout, and while you could easily ignore the narrative if you wanted, it serves as a fun story that sees Gods of Greek mythology portrayed in a silly cartoonish way, especially in the case of the deposed gods. Without their essences they are the antithesis to their usual selves, resulting in interesting exchanges with them. Ares the God of war and courage has been reduced to a cowardly and defeatist rooster, while Athena the Goddess of wisdom and war is now a young child that one wouldn't particularly deem as wise. Seeing the Olympian Gods reduced to the states they find themselves in is surprisingly entertaining, and in turn encourages you to do your very best to ensure they return to their original state. It also helps that the self-aware dialogue is well executed. Immortals Fenyx Rising does a commendable job at providing a good story that fits in well with what is otherwise an open ended and non-linear journey.

The game also looks great, with an art style that is like an amalgamation of Breath of the Wild and Fortnite. It's bright, colorful and particularly detailed, with impressive draw distances witnessed while playing through the PlayStation 5 version. The game offers a dynamic 4K 60 FPS performance mode and native 4K 30 FPS quality mode on PlayStation 5, offering you the ability to pick your poison. The fluidity of the performance mode makes it feel like the best choice, however the game still plays well in quality mode. 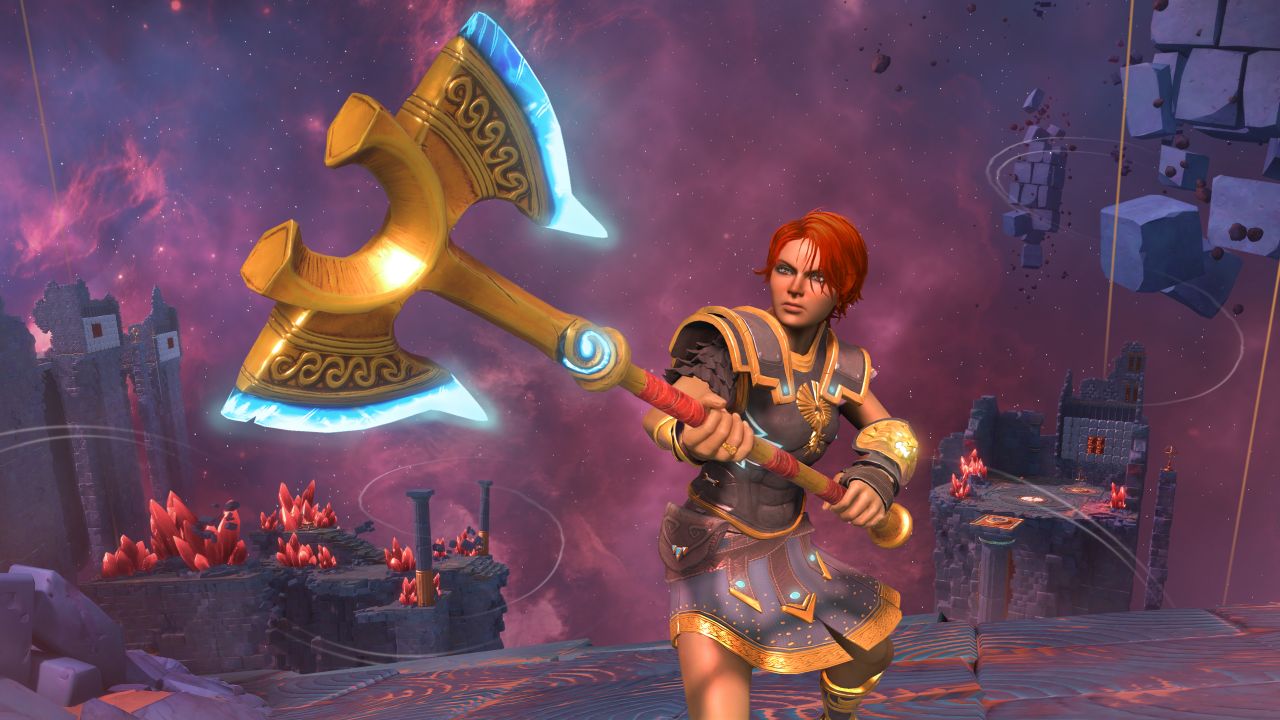 No matter what mode you play in, you still get to experience the solid gameplay on offer throughout Immortals Fenyx Rising. As Fenyx, your task is rather simple; track down the four Gods that have had their essences stolen by Typhon and complete a series of quests to assist in retrieving them. The Golden Isles is your oyster and you are free to help the Gods in any order that you like. They also provide Fenyx with special abilities as you progress through their missions called blessings, which provide buffs such as additional damage output or more health.

When it comes to the combat in Immortals Fenyx Rising, it initially feels rather basic, but as you get more items and upgrade your skill trees, the combat ends up feeling surprisingly deep. Light attacks allow for fast strikes with lesser damage output, while heavy attacks leave you open to counters from the enemy but deal more damage while also filling up the stun meter. Once filled, the enemy will be stunned for a period of time, leaving them vulnerable to a barrage of attacks. You can also make use of your bow for range. Parrying enemy attacks is also an option so long as they are not glowing red, serving as an effective way to counter the enemy. Dodging at the perfect time will also grant you with a short slow down period in which it is easy to pepper your foe with a myriad of attacks. Combat feels most impressive in boss fights, as the gameplay loop of dodging, attacking and making use of potions leads to an enthralling experience.

While you are free to beeline straight to the weakened Gods in order to plod along the main quest, you will likely find plenty of your time spent exploring the expansive overworld and completing the abundance of side objectives. Unlike Breath of the Wild which loved having spaces of the overworld that contained nothing to do, Immortals Fenyx Rising constantly bombards you with fun and interesting things, whether it be completing a simple puzzle or ridding an area of enemies to obtain some precious resources from a chest. The optional objectives you will spend most of your time completing are the Vaults of Tartaros, which are essentially Immortals' version of the Shrines from Breath of the Wild. 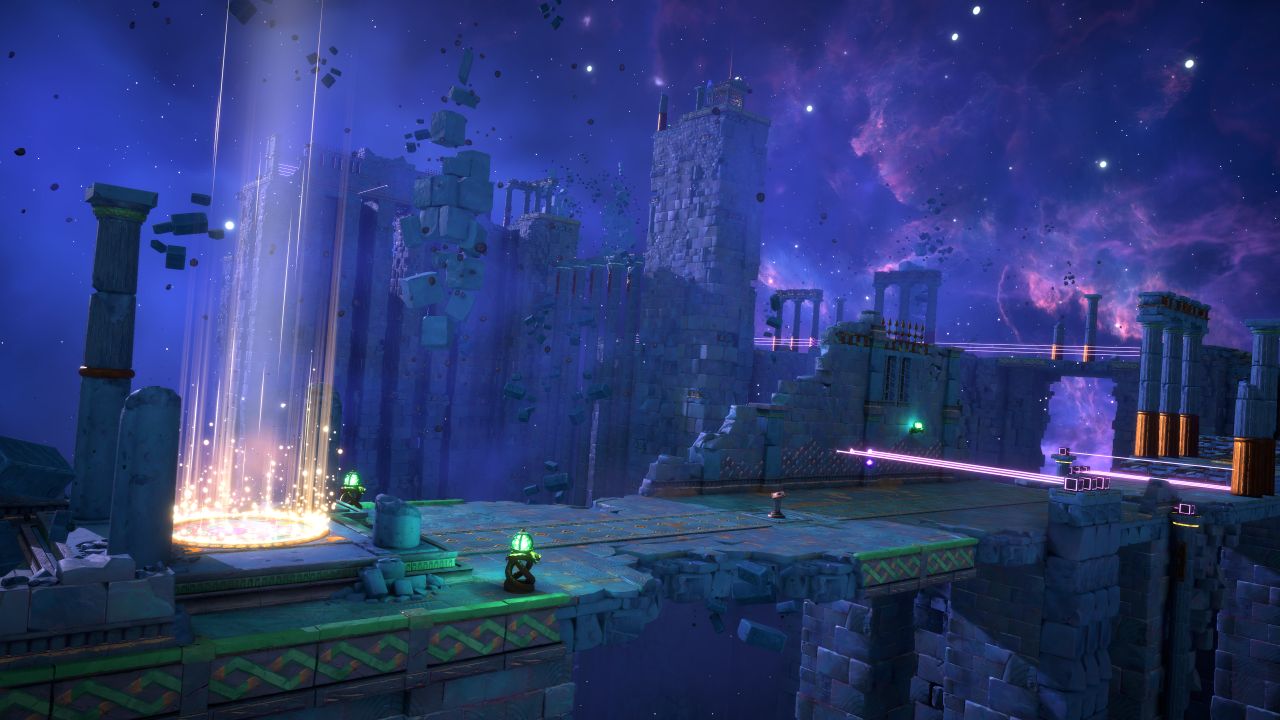 They serve as bite-sized dungeons that require you to complete puzzles or combat encounters in order to receive a special reward. This reward is Zeus's Lightning, a handy collectible that can be spent at the Hall of the Gods to boost your stamina. Most vaults are entertaining and contain puzzles that feel well crafted, however some puzzles suffer from feeling overly finicky and frustrating to the point where they aren't fun. The puzzles are again similar to those on display in Breath of the Wild, often requiring the manipulation of physics based objects such as rolling around giant spheres in an attempt to place them in a hole, or making use of gravity cubes that can be grabbed and moved to assist in platforming. Despite a few hiccups throughout, puzzles are generally a good time.

When you aren't churning through vaults or main quests, you will likely spend your time trekking around the Golden Isles, not just by foot, but also by climbing and gliding. Again, like in Breath of the Wild, Fenyx can climb on basically any surface in the game, allowing for efficient exploration. Climbing, running and gliding using the Wings of Daedalus serve as additional means of traversal, with each expending stamina. You will also quickly notice the sheer amount of collectibles on offer. Coins of Charon are obtained by completing Myth challenges in the overworld such as the constellation or block puzzles. They can be spent to upgrade Godly Powers such as Hephaistos's Hammer or other items such as the bow, for example granting a higher damage output with headshots.

Ambrosia are colorful crystals that can be used to upgrade Fenyx's health when enough have been collected, while the Adamantine Shards that come in four different colours (blue, red, purple, and yellow) when collected from chests, combat encounters or other means, allow you to upgrade items such as your armour, weapons and potions at the Hall of the Gods. The Hall of the Gods serves as a central hub in Immortals Fenyx Rising, allowing you to accept side quests, change Fenyx's look, and upgrade whatever items you wish. 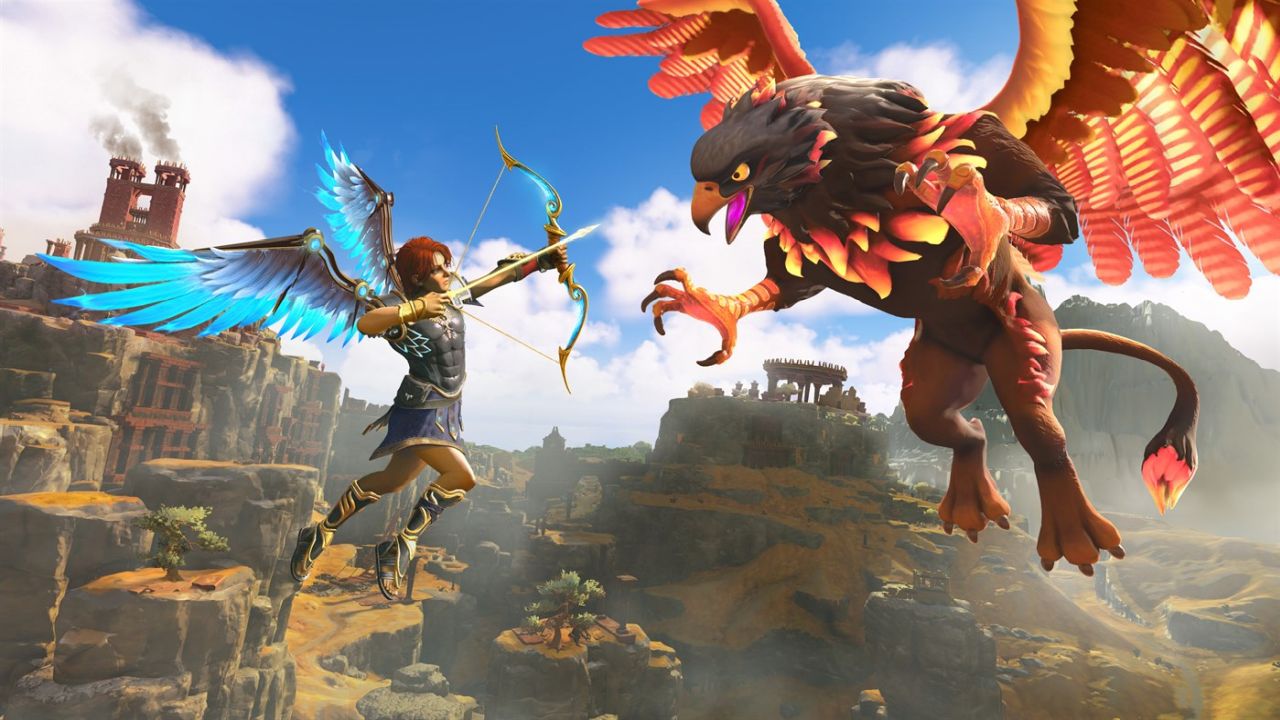 There is a far sight mechanic that Fenyx can use to reveal places of interest throughout the overworld, such as vaults, myth challenges and chests. This ability is best used when atop the peak of a mountaintop or on the head of a giant statue, as it allows you to effortlessly look down below and find all the challenges that await you. The only issue is that this mechanic is totally broken, simply allowing you to spam the R2 button to reveal points of interest as you look around the map. While it doesn't have to be used, it quickly erodes the sense of discovery and exploration that you'd otherwise have had.

In some aspects, Immortals Fenyx Rising does a better job than the revolutionary Legend of Zelda title it is unabashedly inspired by. Firstly, it makes an effort with its narrative, resulting in a simple but surprisingly engaging Greek mythological tale that isn't afraid to get silly, all while providing a rewarding combat system where your weapons don't break (thank the gods!). Like most Ubisoft games releasing these days, it has a stylish open world to explore to your heart's content, alongside a raft of collectibles and puzzles that hit far more than they miss. On the other hand, enemy variety is lacking, some puzzles are lame and void of fun, and the sense of discovery and exploration albeit still present is dampened because of the easily abusable far sight ability. Immortals Fenyx Rising is a pleasant open world title that doesn't revolutionize the genre, but that doesn't prevent it from still being an adventure worthy of embarking upon.

Our ratings for Immortals Fenyx Rising on PlayStation 5 out of 100 (Ratings FAQ)
Presentation
80
Gorgeous and vibrant visual look accompanied with a reliable soundtrack and quality voice acting
Gameplay
75
Combat is simple initially but gets deeper and more engaging as you upgrade Fenyx. Most puzzles and challenges are a lot of fun, however some puzzles feel overly monotonous. Open world exploration is solid for the most part, but the feeling of discovery is hampered by the easily abused far sight ability.
Single Player
78
Charming but predictable narrative that focuses on Greek mythology. Characters are likeable and exude personality thanks to well written and humorous dialogue .
Multiplayer
NR
None
Performance
90
No issues observed
Overall
78
Immortals Fenyx Rising may not do much to push the open-world action adventure genre forward, but it does still ultimately succeed at being yet another competent release cut from the all too familiar Ubisoft cloth.