ART SQOOL, at a glance, is a colourful and strange opportunity for players to draw things. If your expectations are like mine, you’ll be anticipating a short, silly game with a bright art style and humorous writing. ART SQOOL meets all these expectations but never ventures beyond them. It is a fount of wasted potential, a game that could have been exceedingly fun while making interesting commentary on the topics of art and education. Instead, ART SQOOL settles on a single mechanic - drawing over and over, and even that isn’t implemented particularly well. 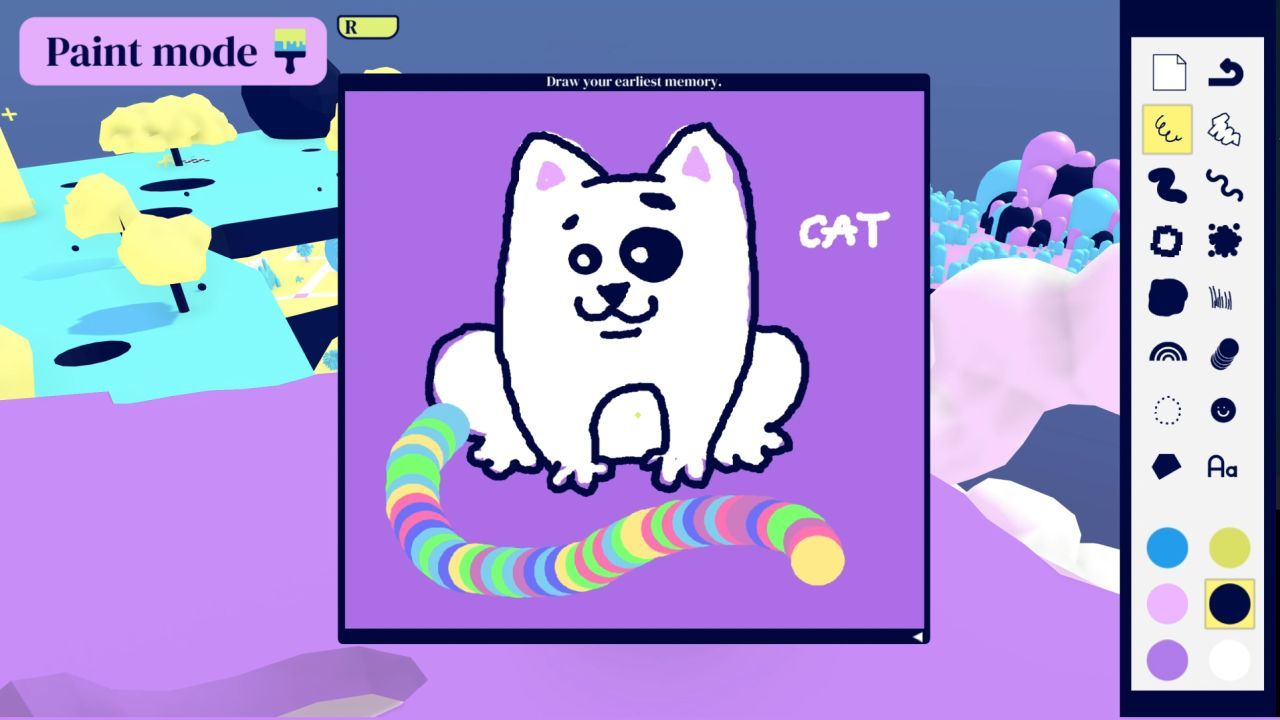 You play as Froshmin, a student at ART SQOOL. Like any student, Froshmin attends classes and receives assignments from a floating, Q-shaped neural network. These assignments range from the typical, such as “draw a plant from around campus” to the absurd, my favourite being “draw something you’ve heard of but never seen.” The assignment prompts are generally quite funny and often caused me to stop and really consider what I was going to draw (how does one draw the “sounds of a room”, for example?). However, as fascinating as these prompts are, drawing gets stale very quickly for several reasons. Firstly, it becomes quickly apparent that the grades you receive after each assignment are completely random and therefore meaningless. You are graded on factors such as colour, linework and composition approach, but even if the indicator bars are full up, you can still get an ‘F’ and fail the assignment. This is possibly intentional – a ‘feature’ to demonstrate how grading art is arbitrary and damaging to creative work. But beyond what we can infer, the game never makes any statement or even hint toward this idea, making it feel more like a logic-based grading system was just something that couldn’t be implemented. For the purposes of ART SQOOL, the random grades made drawing feel pointless, especially when I spent extra time creating something good only to receive a failing grade. The game does seem to know when you have left the canvas blank or filled it in with one colour, usually telling you that the piece seems unfinished and to come back later. However, scribbling in a few different colours seems to be enough to pass every time, and I found myself doing this every now and then to finish all 50 assignments.

Drawing is held back by the severely limited tool set you control. You begin with simply a black pen, and through exploring the outdoor campus you may locate other brushes for your tool belt. Tools include a thick brush, water colour brush, fill bucket, dotting tool and text function, among others, and a limited blue/purple/pink colour palette. These tools are all very simplistic, and you’d be wasting your time if you came to ART SQOOL looking for an amazing drawing program. Or even a mediocre drawing program, since you would be better off and find more to do in Microsoft Paint. Using the joysticks is of course gruelling, but the game allows for touch screen controls in handheld mode, making drawing at least manageable. This again might be intentional – challenging the player to create using limited tools, but no allusion is ever made to this, and the nonsensical grading system removes all challenge and purpose from drawing regardless. 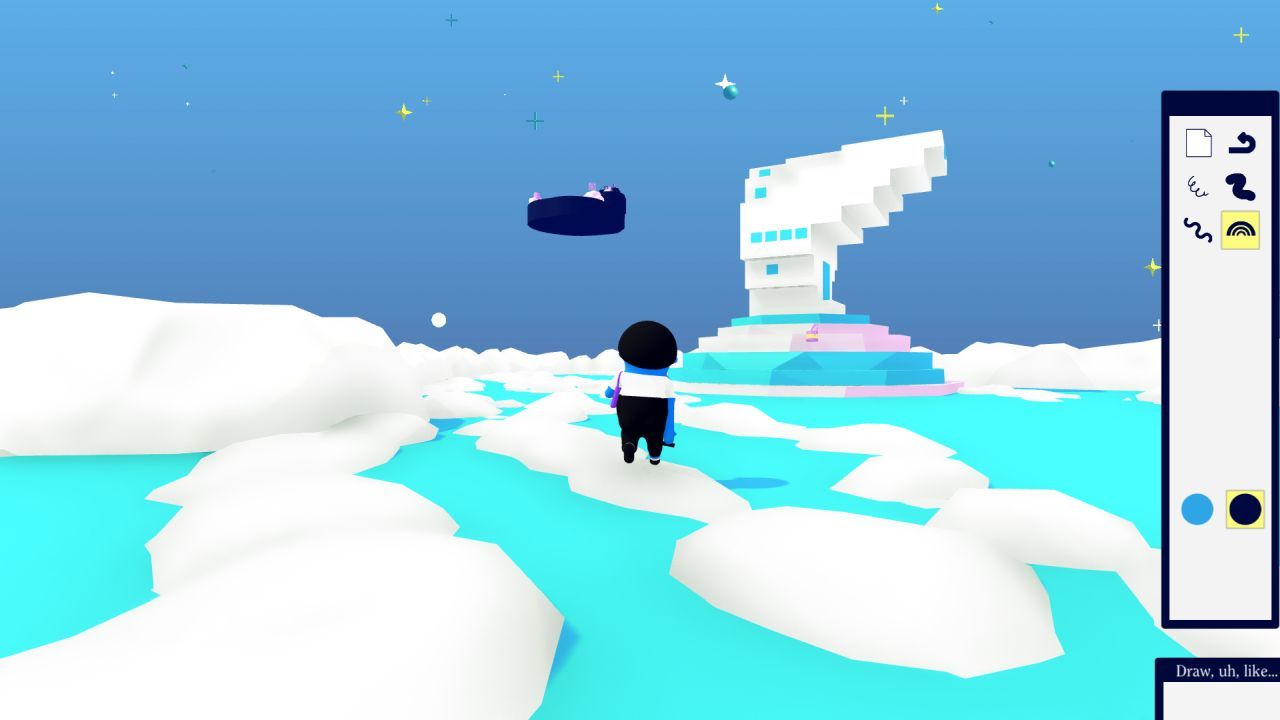 Exploring the campus for tools is seemingly optional – you’re never told to explore and look for brushes, and the game is easily finished without collecting every single one. There is some entertainment to be had in traversing the multi-layered, floating, neon campus where every section feels like a modern art installation. Froshmin walks exceedingly slow, yet has been gifted with the ability to jump infinitely. This makes traversing the campus simple – perhaps a little too simple because there is little challenge in finding brushes, which are all in the open and easily reached.

The aesthetics of the campus, and general look of the game is its strongest feature, with zany buildings and quirky colours and an ethereal soundtrack backing Froshmin as you meander around the map. Despite its good looks, ART SQOOL feels empty, given that there are no other students or professors, and nothing to interact with beyond the collectibles. Drawing and exploring is a lonely process, and although you have the option to holster your drawing pad to walk around, by assignment 15 I usually had my picture drawn and ready seconds after it had been assigned. Finishing an assignment sees the player teleported to different parts of the campus, perhaps in an attempt to encourage exploration. Yet Froshmin can return to class by entering any building or even falling off the map and into space, so beyond finding brushes there isn’t much reason to venture far from where you started.

On top of these flaws, ART SQOOL is not without technical issues too. During handheld mode, the assignment written on top of your canvas is far too small to read. And as much as touchscreen makes drawing easier, it also causes problems – in particular, selecting the text tool using touch screen stops your text from actually appearing on the canvas. The camera is prone to go wild, especially after finishing an assignment. Froshmin is liable to get stuck in floors and stairs, and I encountered a freeze where everything but the cursor stopped. Some of the assignments themselves can be awkward to complete; one assignment tells you “Don’t draw anything.” But since the game identifies the canvas being left blank as an incomplete drawing, this can’t literally be accomplished. After I found my first tool, which was a text option, the black pen tool confusingly disappeared without explanation, meaning I had to complete my drawing with only text.

All of these shortcomings contribute to the directionless feel of ART SQOOL, which is especially compounded by the complete lack of story and dialogue. At certain assignment milestones, there are brief interludes in the form of cutscenes, where Froshmin sings about his time at school. Beyond this, there are no quests, objectives or narrative, or anything to gamify the experience of drawing. Supposing this was the intent of the game, to raise the question of is it fun to draw without a purpose? In this case I would answer with a firm ‘no’, simply because the drawing in ART SQOOL is so basic and artificial, it rarely feels fun – especially for someone who isn’t particularly good at drawing. 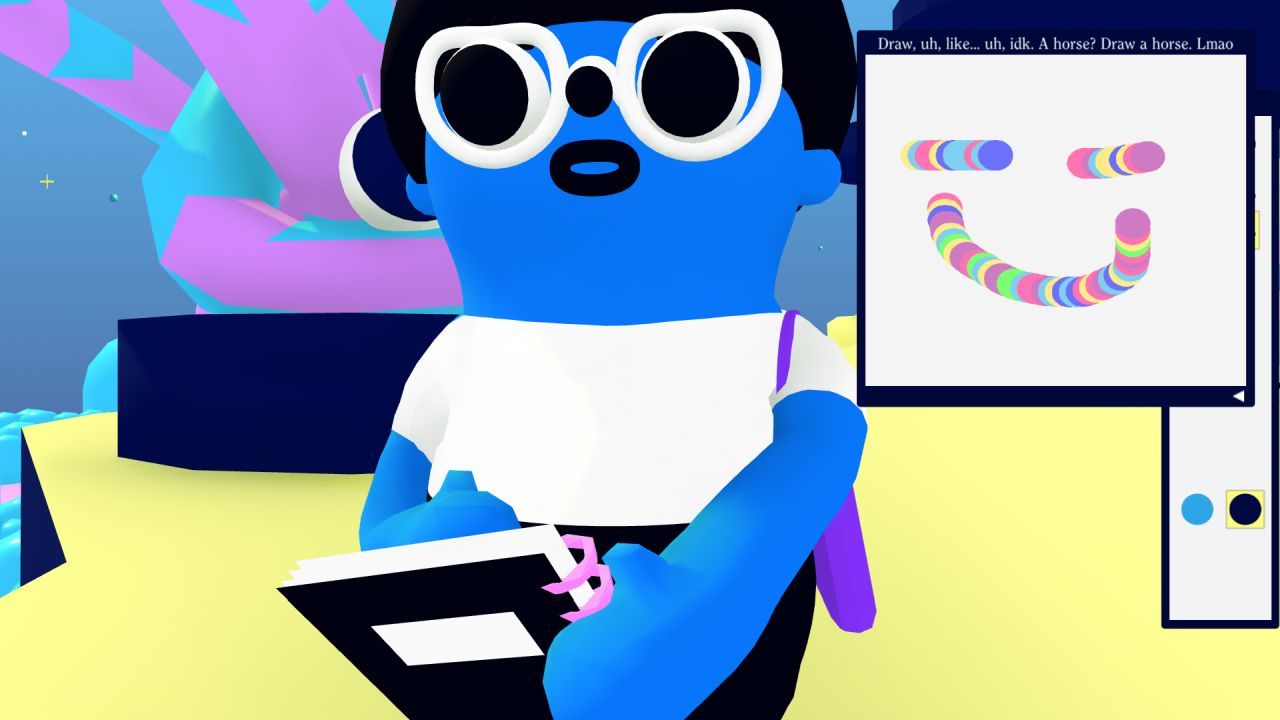 Overall, ART SQOOL met my initial expectations but never pushes itself to be anything more than making rudimentary drawings. There is a lot of wasted potential to discuss more meta elements such as commentary on creating art and education. While ART SQOOL occasionally mimics familiar educational / university language and juxtaposes this against a bizarre environment, it does this very vaguely and fails to make much of an impression. Drawing gets boring after around 30 minutes and doesn’t present a challenge beyond using basic tools. Gameplay feels as though it’s lacking a driving force, and it’s never made clear why assignments have been failed. While this might be a subtle critique of how grading art is arbitrary, this is never particularly overt or specifically highlighted, making it unclear whether some gameplay choices are meant to be making a statement or just plain lazy. Grading art might be demeaning, but I feel no qualms in telling you that ART SQOOL feels like a waste of time.

Our ratings for Art Sqool on Switch out of 100 (Ratings FAQ)
Presentation
50
Vivid, colourful backgrounds with a small campus full of strange buildings. ART SQOOL’s style is certainly distinct, but also lacks detail and purpose.
Gameplay
30
Gameplay is a term to be used very loosely here. You’ll draw 50 pictures in a row using simplistic digital art tools and occasionally wander around the map.
Single Player
25
With no story and barely any dialogue or objectives, my time at ART SQOOL was dull, with the novelty of how quirky the assignments are wearing off very quickly.
Multiplayer
NR
None
Performance
50
Besides occasional freezing, getting stuck and camera issues there aren’t too many performance problems, but then again, the game feels so empty there’s not much else to go wrong.
Overall
35
Art is certainly subjective, but most people will be hard pressed to get more than an hour's enjoyment from ART SQOOL. 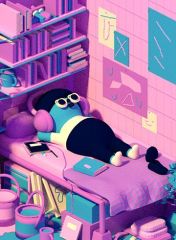