Stuck in the past

I have a complicated relationship with the musou genre. When it was first getting popular on the PlayStation 2, I couldn't get enough of it. The button mashing action of Dynasty Warriors appealed to something deep within me. Over time, though, I began to grow sick of the tedious gameplay associated with the works of Omega Force. I largely avoided the genre until only recently when I played Dynasty Warriors 8: Xtreme Legends for the Nintendo Switch. Apparently, absence makes the heart grow fonder, as I was hooked once again. And when the developer announced they were working on Hyrule Warriors: Age of Calamity, I hoped to keep the good times rolling. 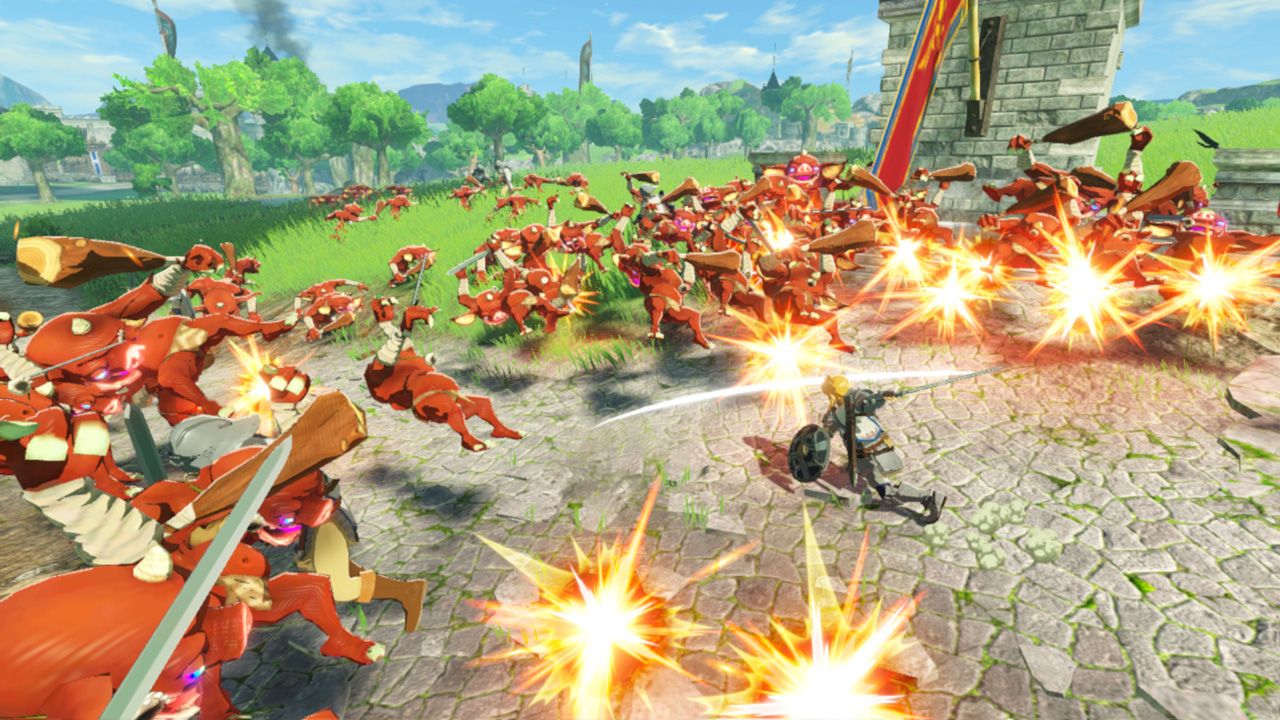 Returning once again to the world of Nintendo's iconic series, Age of Calamity takes the core foundation of the musou genre and infuses it with ingredients from the excellent Breath of the Wild. For the traditionalists, the hack and slash gameplay the genre is known for returns here. Using either Link, Zelda or several other warriors, you'll slice and dice your way through thousands of enemies. As you take out swaths of foes, you'll charge up a special meter that will allow you to unleash a massive attack capable of clearing out dozens of them at once. It's more complex than it sounds, especially once you factor in light and heavy attacks, as well as different weapons that can be equipped, but if you are familiar with Omega Force's other works, you'll have no trouble stepping in.

However, by bringing in different aspects of the latest core Zelda release, Hyrule Warriors is able to outfit its gameplay with ample depth. Each character has access to magical runes that play a major role in combat. Cryonis, Stasis, Remote Bomb and Magnesis are powerful enough on their own, but they typically can be deployed against stronger foes in order to shift the tide of battle. Additional elemental runes can be used in conjunction with parts of the environment to help clear out enemies as well.

There are also a multitude of different characters you can use, and each of them has their own satisfying style. Link, wielder of the Master Sword, is the most straight-forward, and thus, easiest to use. Zelda utilizes the Sheika Runes more than her compatriots, which grants her a variety of abilities, but also makes her a bit more complex to play as. Impa feels like the middle ground between those two, with solid weapon usage, but also the ability to use magic abilities. There are four other main characters (Mipha, Daruk, Revali, Urbosa) who make up the Champions. While these are the core seven you will use, there are countless other secret characters that can be unlocked by completing side quests.

For as much variety as there is, though, if you're not a fan of the genre, this title won't sway your opinion. The hack and slash gameplay has not been altered enough to make enemies of similar titles into allies. And even for a fan such as myself, I did find myself getting bored of the game after too long of a sitting. It's the kind of game where I can only do an hour or so at a time unless I wanted to burn myself out on it. It still does what it sets out to do rather well, though. 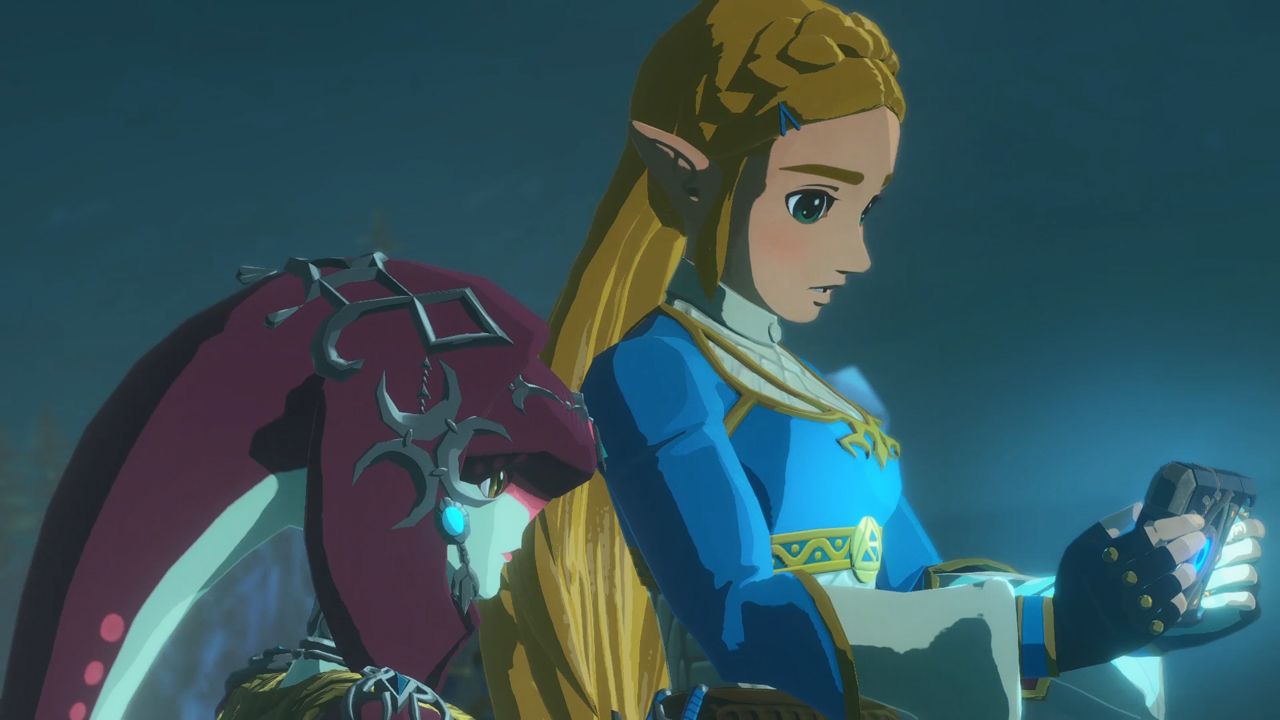 The biggest issue it faces is one most of Omega Force's titles struggle with, and that's a poor camera system. The camera often finds a way to give you the worst angles on the action, particularly when you're facing a creature that takes up a large portion of the screen. It can make it tough to both figure out where you are, and if there are any special abilities you should be using for the battle.

You do get a reprieve from the action on the ground, for better or worse. Each of the four Champions has a Divine Beast they can pilot. These large mechanical creatures are extremely powerful, and capable of wiping out thousands of enemies in a short amount of time. Getting to pilot these vehicles should feel significant and enjoyable, but they never quite gelled with me. The camera, again, is an issue, with enemies being difficult to spot at times. It's no fun getting pelted with explosives from something impossible to see on-screen. Even if the camera was perfect, though, I'm not sure how enjoyable I would find these beasts. Yes, it's cool to get to use them, but I never really felt powerful when in one. The attacks lack the impact you would expect from such a machine. It's nice to have a break from the regular gameplay, but not so much when it ends up being less enjoyable.

When you're not slaughtering Moblins and Lizalfos, you'll spend your time looking over the map of Hyrule. It is here where you will select missions to take on, shops to purchase from and figure out which upgrades you want to activate. Between those points of interest, there is plenty of activities for you to unlock. Completing side missions is not only important for raising your level, but they also reward you with supplies which can then be used to unlock new shops and purchase those upgrades. As mentioned before, there is the potential to get burnt out from jumping into too many side quests, but there's never a shortage of things for you to do.

If you have a friend close by, Age of Calamity does feature co-op play. The two of you can team up and take down the forces of evil together. Defending a base or taking down bosses is significantly easier with a human partner. The AI is decent enough when going solo, but it can't match the teamwork of having another person with you. The drawback to this, though, is that the framerate dips more here than it does in single player. The lack of online play is also a bummer. 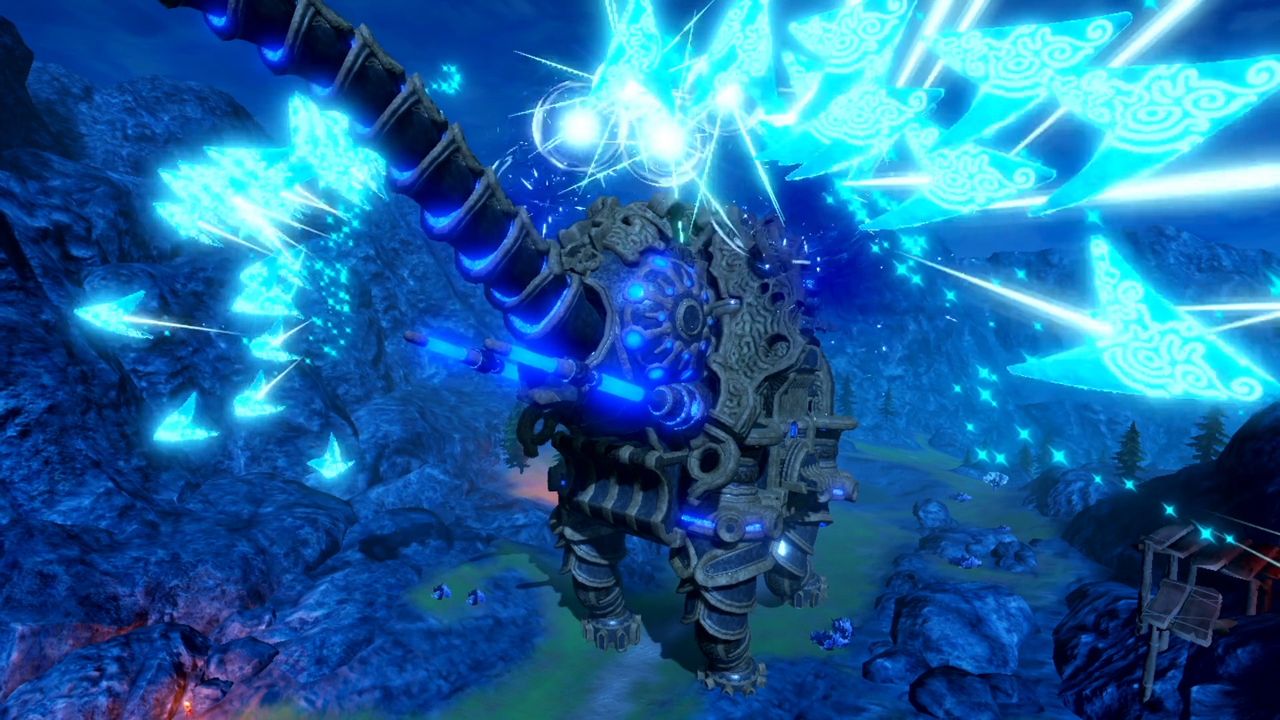 Considering the history of the franchise, it feels a little strange to have some kind of follow-up to a mainline Zelda game. Hyrule Warriors: Age of Calamity serves as a prequel to Breath of the Wild. In a bit of story-telling that shows that things may not go as planned, a small robot returns to the past from a future where Ganon has already won. It is this robot that helps get the gang together in order to prepare for the Calamity. If you are familiar with this title's predecessor, you know that only tragedy lies ahead. But perhaps, the end of days can be averted with the proper preparation.

Although tough to pull off, prequels can serve as an excellent way to flesh out future events. Think of titles such as Halo Reach or Life is Strange: Before the Storm, where you know the tragic conclusion is coming, but you still hope you can put it off somehow. Age of Calamity walks a fine line here, where this sense of dread never leaves, no matter how well things appear to be going. However, without going into the land of spoilers, the final act of the campaign switches things up significantly. For better or worse, it lacks the edge you expected the conclusion to have.

Since it takes place in the same universe as Breath of the Wild, Age of Calamity is able to borrow its visual style. The character designs are some of the best in the history of the franchise. I love the looks of the main players, particularly Zelda and Impa. And the effects used for the runes look great on both big and small screens. The title does showcase some of the limitations of the Switch hardware, however. There is a ton of pop-in in the environment. Enemies tend to spawn out of thin air, and foliage typically waits to sprout until you are right near it. There is also the near requisite musou slowdown that occurs when too much is going on at once. Omega Force has gotten good at tamping that down, but it is still an issue with nearly all of their titles. 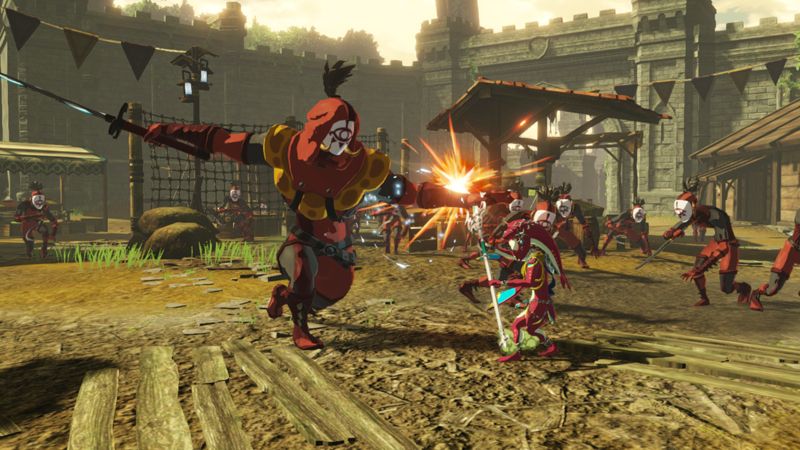 Hyrule Warriors: Age of Calamity is a decent entry in a genre that has its fair share of naysayers. Even with all of the Zelda style it sports, the core gameplay has not evolved enough here to change anyone's mind. However, if you have not gotten sick of musou action, and have a love for Nintendo's long-running series, you'll find something to enjoy. There's a smattering of content to jump into, a ton of secrets to uncover and a story that offers up a new perspective of the events from Breath of the Wild. It may not match the quality of the Nintendo-developed entries, but when it comes to third-party attempts, this is one of the better ones.

Our ratings for Hyrule Warriors: Age of Calamity on Switch out of 100 (Ratings FAQ)
Presentation
70
The character design is some of the best work seen in the Zelda franchise. Issues such as short draw distance and enemy pop-in once again remind you of the limited power of the console.
Gameplay
64
Even for a fan of the musou genre, the hack and slash gameplay can get tedious at times. The attempt to spice things up with the Divine Beast segments is commendable, but these missions are bland.
Single Player
74
Taking place before the events of Breath of the Wild, Age of Calamity is thick with tension and dread. However, smart tweaks and new story beats will keep you on your toes, even if it lacks bite.
Multiplayer
70
Having a friend working alongside you does help dull some of the tedium that can arise with the genre. I just wish there would have been online play available.
Performance
60
Although not as bad as past Omega Force efforts, Age of Calamity has its issues with frame rate. The action is frequently chaotic, which tends to push the boundaries of the power of the Switch.
Overall
68
Hyrule Warriors: Age of Calamity is a satisfying musou hack and slasher, but that style of gameplay can only stay fresh for so long. The carry-over from Breath of the Wild, specifically the strong art design and rich lore, should keep the hardcore crowd invested until the end, though.

All videos for Hyrule Warriors: Age of Calamity (3)
Advertisement ▼