It was less than a day since I've seen credits roll on Godfall and I couldn't remember half of what I did. It's not that I was doing too much to keep it all straight - the game is surprisingly short - it's simply that forgettable. Even worse, the parts of Godfall that I do remember are actively terrible. I had hoped this new slasher-looter for PS5 launch would be a rote distraction, not amazing, but an inoffensive time-sink. I'd pop in, dice up baddies for around twenty hours, equip a bunch of gear, and move on in my life. Unfortunately, about four hours in, the wheels come off the bus and Godfall is revealed to not only be aesthetically and narratively boring but actively infuriating. Blending the loot dynamics of Borderlands and trying to match it up with Souls-like combat isn't a bad idea on paper, but the game feels rushed, lacking the fine-tuning necessary for such a blend. Godfall isn't just a bad launch game - a category littered with ambitious titles and teams working hard to launch on a specific date - no, Godfall is just a bad game on any terms. 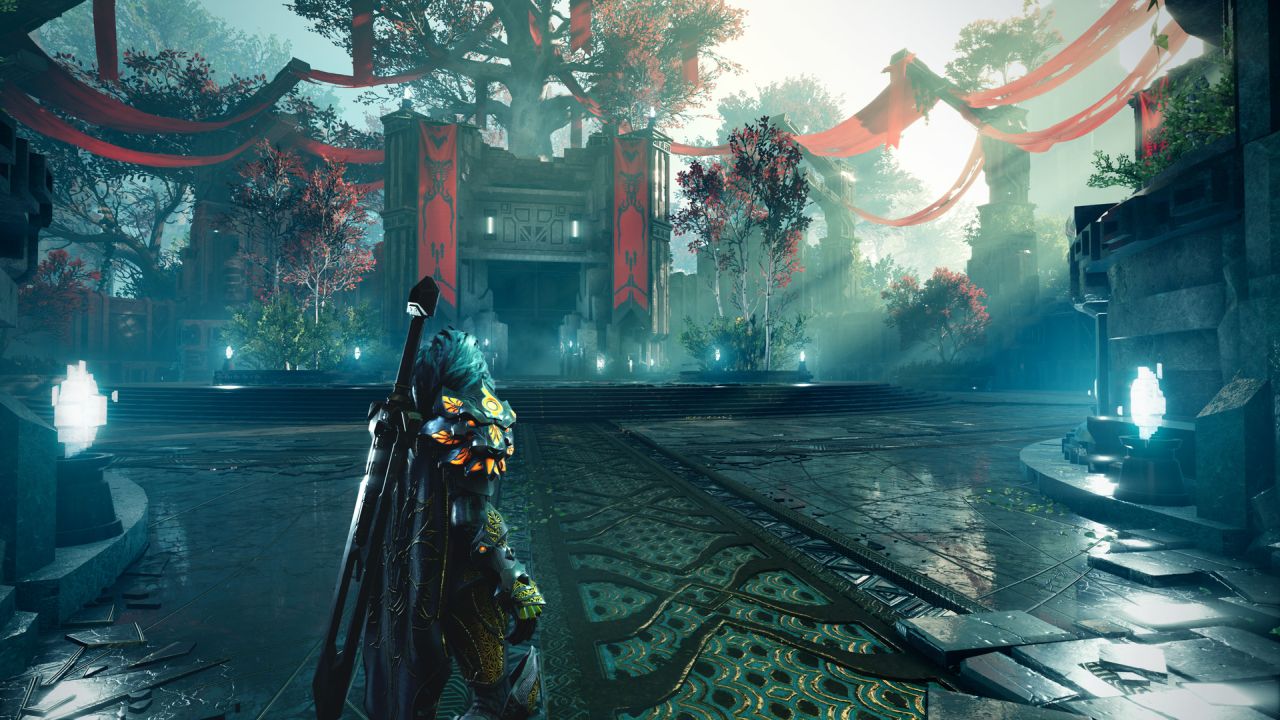 Players assume the role of Orin, whose brother, Macros, has arisen to power through deceit and intends to use his newfound “Right of Ascension” to rise to god-hood. Orin journeys to the three kingdoms of Earth, Water, and Air, to defeat Macros' generals and then challenge him to single combat. In some ways, I admire how unabashedly video game-y that plot is. Kill the mini-bosses, get to the main boss, and beat the game. It would work way better if it leaned into that audacity, the way that DOOM winks at its audience while inventing mythology behind the Doom-Slayer or the way Devil May Cry isn't afraid to laugh at itself. Some of that levity is desperately needed here as the overly-designed world looks like it leaped off the screen of a Zack Snyder movie and has the same doggedly serious tone.

It might be fair to argue that Godfall feels the plot is irrelevant, that it's designed to be ignored as you talk with your friends over chat. But it doesn't excuse how boring the world is. Even if the plot isn't a priority, the flavor of the world and its characters are front and center in a game like Godfall. I may be chatting with friends while fighting, but the game should also have something worth discussing or else we could be playing any other multiplayer game - which you should do in this case.

The multiplayer itself is lacking. The game slightly scales in multiplayer, but I found it much easier to brute force my way through the game with someone else. In that way, I guess the multiplayer makes it better. We'll get to the difficulty in a bit, but solo the game pushes back making itself a truly unpleasant experience. With a friend, it's a bit more forgiving. What's baffling is how few multiplayer features are supported in Godfall. The game doesn't support local multiplayer/split-screen co-op, it doesn't support cross-play, and it doesn't have any matchmaking features. So not only do you have to try and convince yourself to play Godfall but if you want the multiplayer experience, you have to try and convince some poor friend as well. 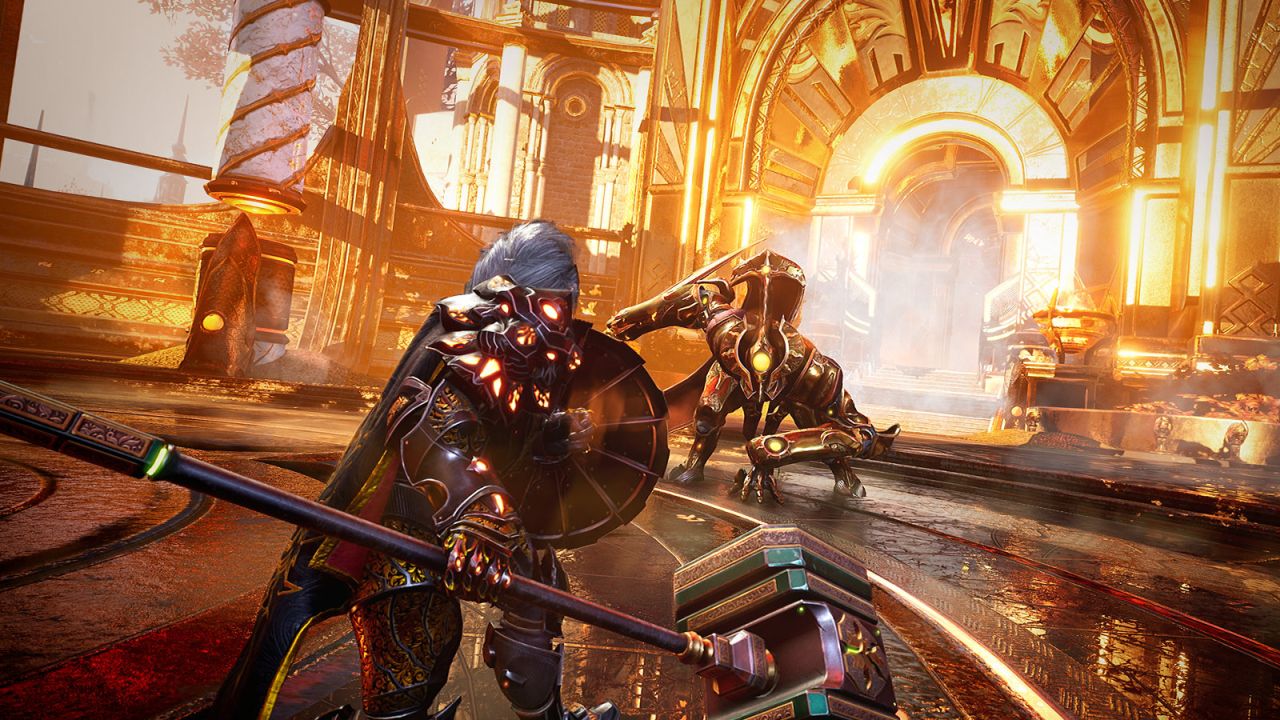 Godfall does allow you to select different difficulties, but on Normal the game has weird spikes in challenge. It starts off being a little too easy, which is better because the game is so bland, I could see it wanting to just usher players along to the end-game content quickly - the same way a game like Destiny does. Then, about the time you reach the first boss fight, the game really starts to push back against players, demanding a high level of skill to progress. A looter that wants to be Dark Souls isn't a bad idea, but the game is one of many that seems to have only interpreted the Souls games as difficult pattern recognition and ignored the way they lend themselves to specific rule sets.

Godfall is so sloppy in its hitboxes and controls, that it's really just infuriating for the sake of it. And messages are mixed; the game gets more difficult, but some bosses never have their health replenished after killing you, meaning you can just run back and pick up where you left off, making your death meaningless. But even this is inconsistent as some mini-bosses did have replenishing health. At least all main bosses have their health sectioned off, so if you beat them down one section, they'll never regain that health unless you abandon the mission. With the rules all over the map, it's an absolutely maddening game to play.

It's bad enough that the game just plays poorly, but everything surrounding the moment-to-moment gameplay is designed equally bad. This where Godfall feels terribly rushed, as if the entire studio never got on the same page as to what kind of game they were making. Is this supposed to be a Souls-like game with meticulous and challenging combat? Is it supposed to be a character-action game with fun and light combat sequences? Or is the combat supposed to take a back seat to the grind of getting loot and leveling up your character? The game wildly bounces around between all of these and I kept having to re-calibrate my brain to understand what it was asking of me. 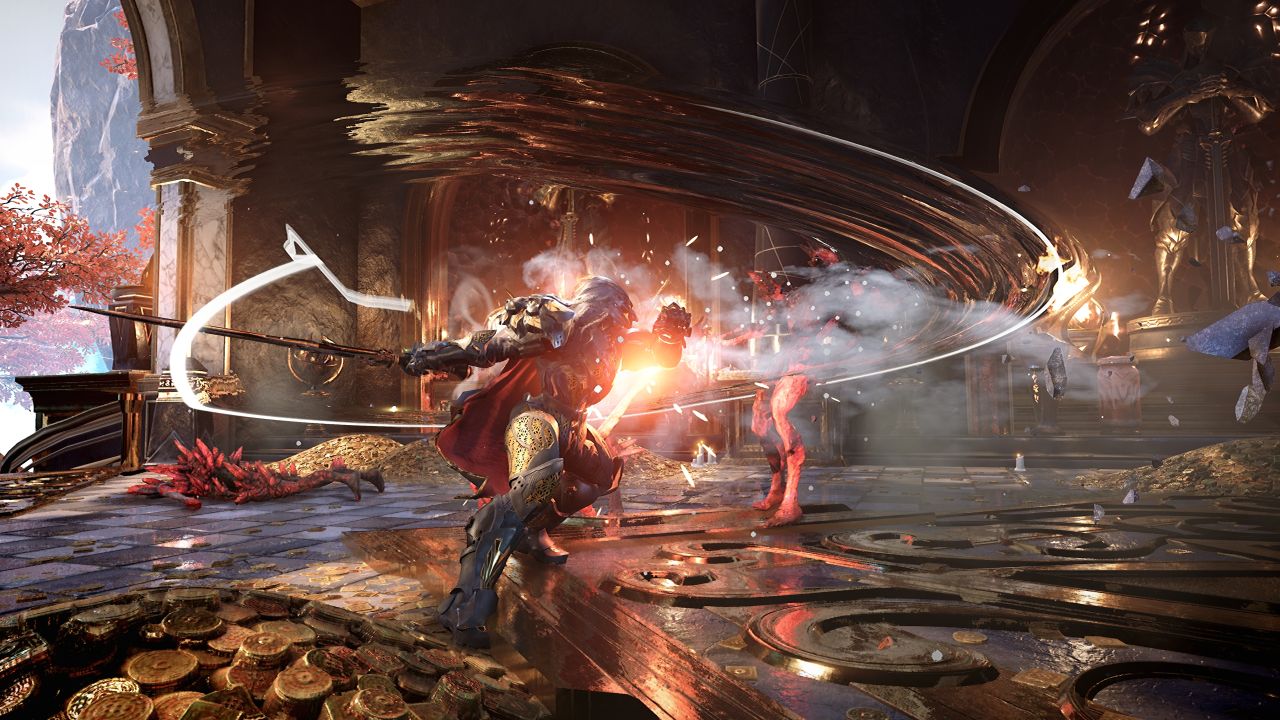 The loot elements are also poorly designed. Godfall wants to have the design of Borderlands as you constantly get new gear, compare it to other loot and upgrade your equipment. However, I so rarely got good loot that I usually just kept using/upgrading the same stuff. Your loadout starts with the Valor Plates, which are kind of like selecting your class of character. Aside from cosmetics, the only thing that your Valor Plate changes is your special ability. I'd like to say those cosmetics mean something, and maybe it's worth showing off to your friends, but again there's no community hub for Godfall, so there's nowhere to show how good you look.

There's also a Destiny-like quality to how you'll earn this loot, not just by playing the main campaign, but by going back to worlds you've completed and replaying the same missions (or Hunts, which are the game's side missions) over and over. The end game content offers instanced missions remixed to change the dynamic - though I found them to be mostly the same. The grind of content would be daunting even if the game was fun (which it isn't) or you could show off to a community (which you can't.) So there's no reason to engage with any of it.

Perhaps the best quality of Godfall is its aesthetic. If you go to YouTube and search for “Epic Fantasy Music”, Godfall feels like the royalty-free artwork that's displayed (and its score sounds like the music you'd hear). It's all a little too much. Every piece of armor is ornately designed, with all these flourishes and details. Every inch of the world is painstakingly detailed with ruins and gorgeously colored. It's so over-the-top, it again feels like Godfall should be leaning into the joke. None of this world is practical, none of it seems serious. Macros looks like someone stuffed The Rock into the Black Panther armor, and my armor looks like Ant-Man meets World of Warcraft, and it's absolutely hilarious, but Godfall seems resolute that no one should be laughing. I feel like I've stumbled into a middle-school D&D session, and I'm trying my best not to laugh as the tween players describe the action. 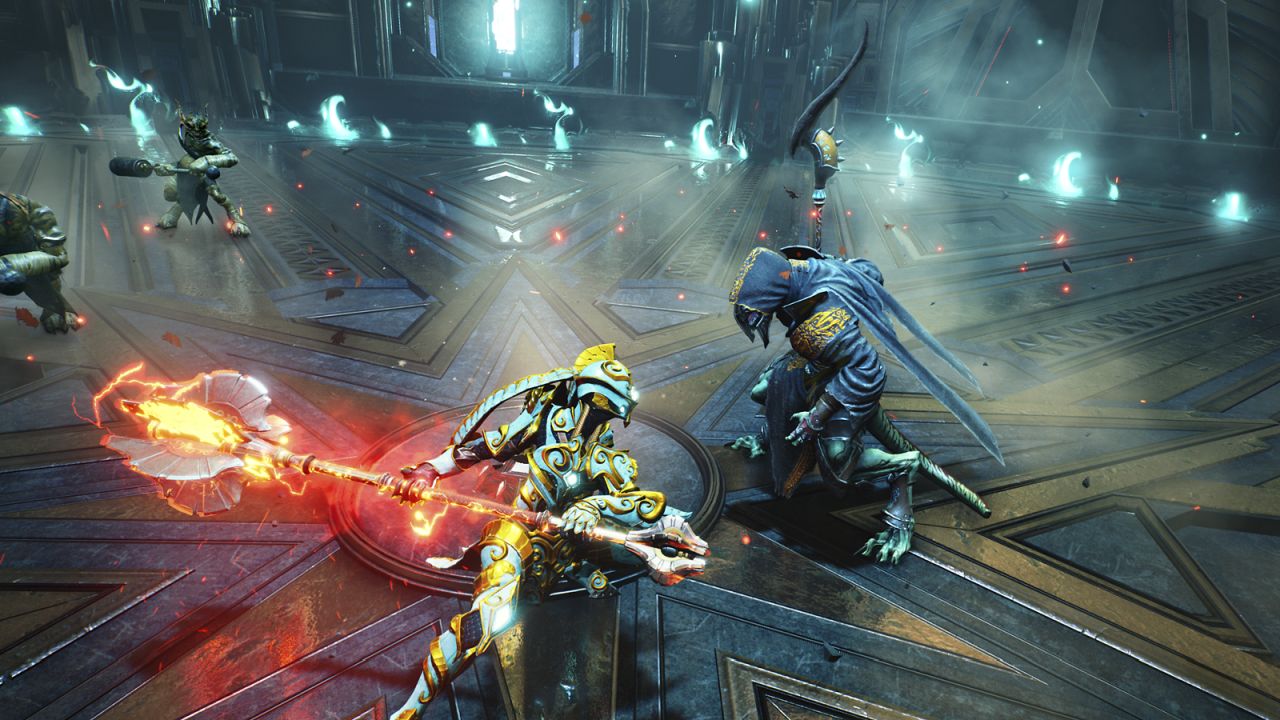 The technical aspects of Godfall don't feel that important, because even if the game ran perfectly, it still wouldn't be recommended. That said, the game is a technical mess, and it's not just the multiplayer (though it's equally bad there.) Even playing alone, I ran into constant frame-rate drops mid-combat, which were utterly infuriating for a game of this genre. Equally bad were the crashes that happened mid-mission, which would cause me to lose all progress and have to start the game over, sometimes even happening during difficult boss-fights. There were also bugs selecting missions, selecting armor - I mean the game runs poorly enough that I was actually surprised how long it took to crash the first time. A patch came in about half-way through my time with the game that helped the frame-rate a bit, but the crashes continued.

There's no redeeming quality to Godfall. The game feels soulless, hollow, and dull at the best of times. At its worst, it's unintentionally hilarious and unbearably frustrating. The world is flat and generic, the gameplay is confused, the loot is uninspired, and the multiplayer is lacking. It's hard for me to imagine any audience having fun with Godfall. It's a game that feels like it was made with no one in mind, no community, no player, no group of friends - and definitely not you.

Our ratings for Godfall on PlayStation 5 out of 100 (Ratings FAQ)
Presentation
60
Godfall's look is probably the best thing about it and it kind of feels like overly-designed fan art. It's unintentionally funny, and I wish it would lean into the joke a bit more.
Gameplay
45
Playing Godfall is an unpleasant experience, largely because the game has no idea how you should be playing. Wth poor mechanics and wild difficulty spikes, it left me frustrated.
Single Player
30
Like the aesthetic of Godfall, the narrative would probably be better if it stopped taking itself so seriously, but as it is, it's one of the most boring things I've played all year.
Multiplayer
45
This is probably the closest the game comes to being enjoyable, but it's lacking major features in multiplayer, the biggest of which is matchmaking.
Performance
35
Not only are there frame rate drops and crashes, but they happen at the worst time, costing you boss fights and resetting your progress. And that's putting aside the simple, annoying bugs in the game.
Overall
40
Godfall is such an unpleasant experience it's difficult for me to find anything to like. Occasionally, it flirts with just being a mediocre snooze, but then you hit an aggravating boss fight that reminds you of how poorly it was designed. It would take an entire shift in tone and genre to salvage anything offered. 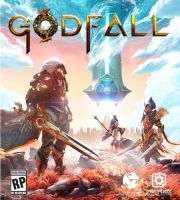 All videos for Godfall (4)
Advertisement ▼