A sprawling city that hums with life; a maze of cloud piercing skyscrapers, androids, augmented humans and barely-legal hover cars – the essence of cyberpunk. Cloudpunk offers the chance to explore such a cityscape from the perspective of Rania, Cloudpunk's newest delivery driver. From the very start you're promised speed, danger and even money – provided you can survive the night. Cloudpunk makes notable attempts to live up to this excitement, but unfortunately, a series of technical errors and questionable gameplay choices makes the whole experience fall short. 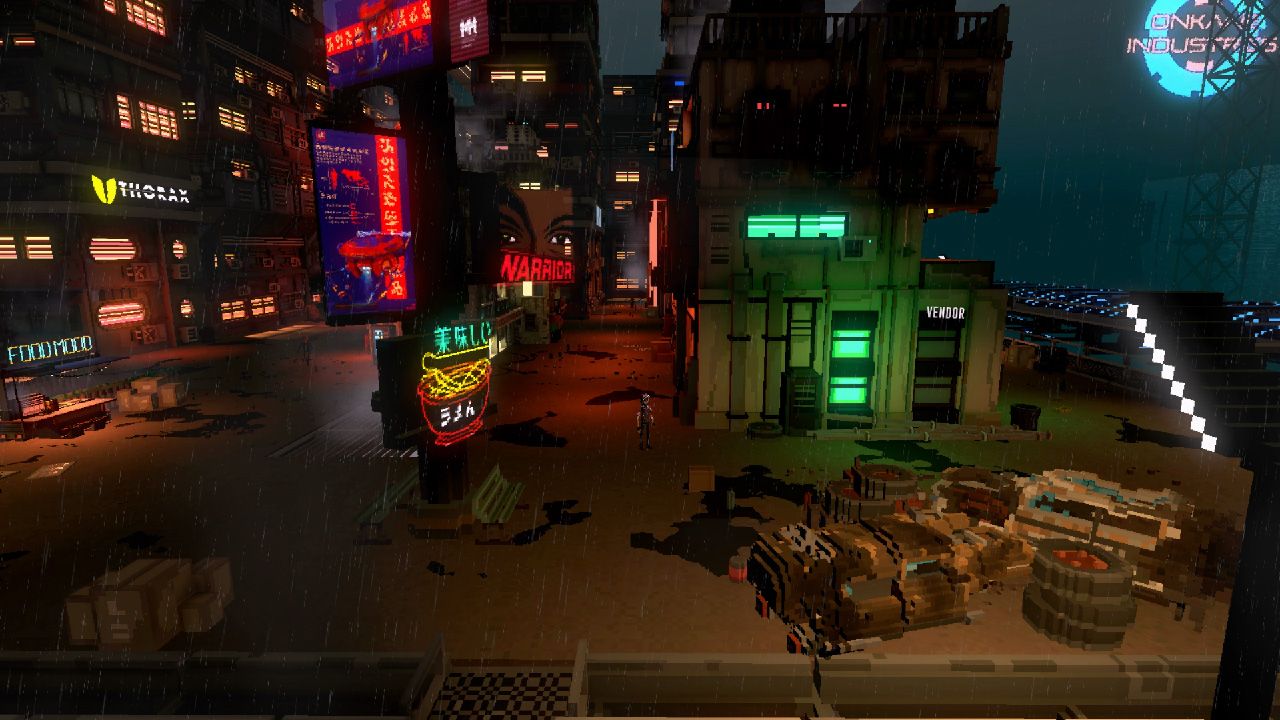 From the get-go, it's evident that developer ION LANDS is trying to recreate the atmosphere seen in Blade Runner, The Fifth Element or any other movie where technology has flourished and the quality of human life has withered. Nivalis is a gorgeous city, but conversations between Rania and dispatch (referred to as 'control') make it quickly clear that life in the metropolis is either long and painful or cut very short. These conversations, which you will mostly have while piloting your company hover car – or HOVA – make up the bulk of the narrative and are well written if a little cliché. The story of Cloudpunk is straightforward – you are piloting a HOVA around the city for a 'semi-legal delivery company' called Cloudpunk. You will be making deliveries and occasionally moral decisions, but mostly just trying to get through your first night on the job. Commentary on 'society' can be a little heavy handed with storylines ranging from stopping the poor from starving in the freezing depths of the city, to whether owning sentient sex robots is perhaps a touch unethical; but the world of Cloudpunk is so purposely stylised and exaggerated that it gets away with it for the most part.

This style, comprised of voxel art, is a blocky playground for the player to explore. Filled with numerous districts dotted with vendors, food stalls and collectibles, the city is fun to traverse. You will have to make use of portals, elevators and locating the correct place to park your HOVA in order to successfully navigate the multi-levelled environments. This, and the ability to shift into first person mode, makes weaving through streets a satisfying experience. Though the camera may seem very sensitive at first with no option to adjust this, your frantic movements and constant motion seem to match up well to the hectic pace of the city itself. Alternatively, there is a third person camera, but it feels slippery and unstable, while losing the sense of scale first person mode creates in having you dwarfed by your surroundings. Cloudpunk is full of charming artistic touches such as individual illustrated character icons for whoever is talking, and detailed indoor environments such as bars and cafés which can be seen as you move through the city. It is a shame that most of these environments are inaccessible, as the few indoor locations that do exist are delightful. Namely, Rania's apartment, despite being on the rough side of town, boasts an amazing view of the city and is packed with cute knickknacks which can be purchased over time to decorate the room. 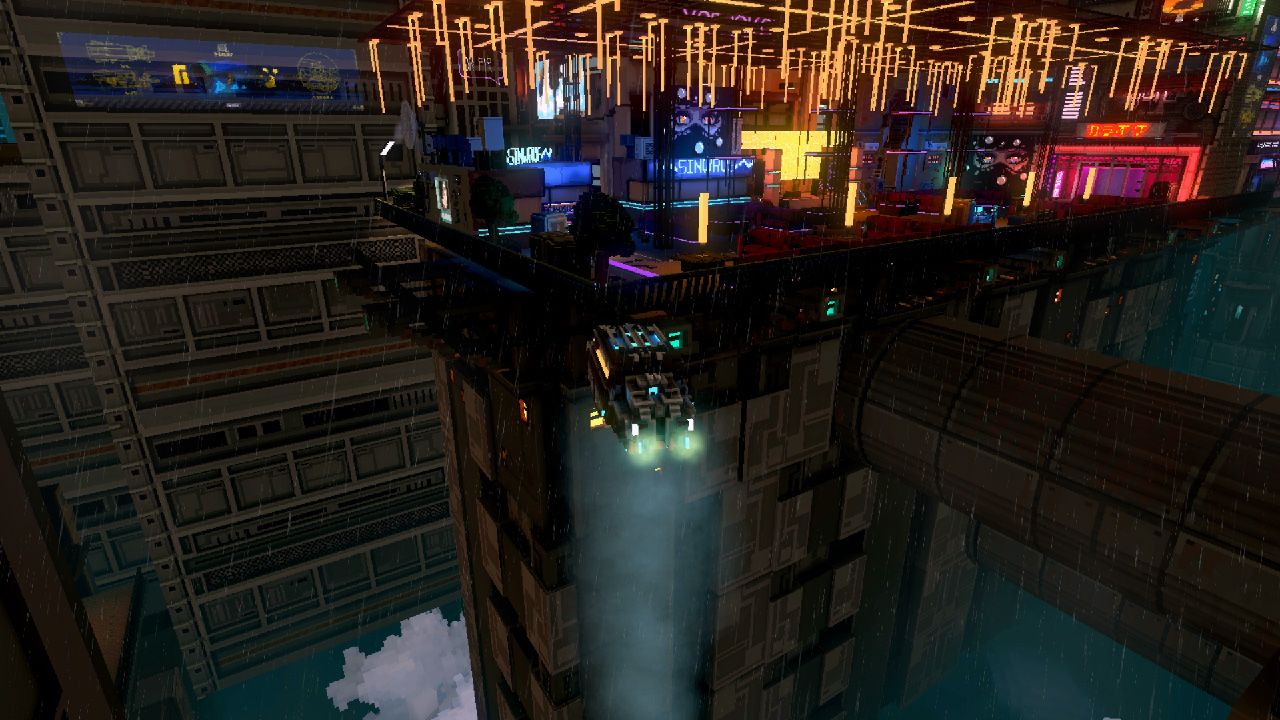 Customisation doesn't end there though – there are a number of outfit options which can be purchased for Rania from different merchants, and the HOVA itself can be modified in various ways. This includes practical upgrades such as speed boosters and bumpers, as well as a cosmetic options. Fitting my HOVA with neon red taillights that trailed after my craft wasn't necessary but certainly made my experience zipping around buildings feel a lot more stylish.

For the most part then, Cloudpunk might display everything you'd want a cyberpunk adventure to look like. Apart from some dodgy voice acting, ranging from flat line delivery to what sounds like bad Beatles impressions, Nivalis is home to many interesting and often funny characters who may offer Rania side quests in the form of deliveries or passenger transporting. But there are some odd design choices in Cloudpunk that often make the game feel tedious and unappealing.

There are small niggles, such as the fact that the map is assigned to left on the d-pad, and the right button is an option to 'hide all UI' – even during dialogue or when using menus. This means that menus need to be navigated with the joysticks and anyone who prefers using the d-pad should prepare to feel frustrated every time they accidentally hit a button. That's a relatively minor issue, but there's such a plethora of these small, annoying choices that they gradually build up to be quite irritating. Mission waypoints don't usually update until an entire exchange of dialogue is finished, leading to a lot of standing around while you wait for discussions to end, with not much to do in the meantime especially if you've already cleaned out the area of its collectibles. Merchant dialogue can't be skipped without automatically purchasing the first item in the sale list, so expect to sit through those same lines every time you want to quickly sell your loot. The entire map itself cannot be viewed at any time – only the map of the district you are in. So, as much I wished to return to my apartment to buy more decorations, I had a very difficult time finding it. Access to the wider map may also have presented players with more options in the route they would like to take to their next delivery; being able to choose which districts I cut through, or if there were any side missions I could stop at on the way, would have introduced a bit of variety to the often repetitive delivery missions. 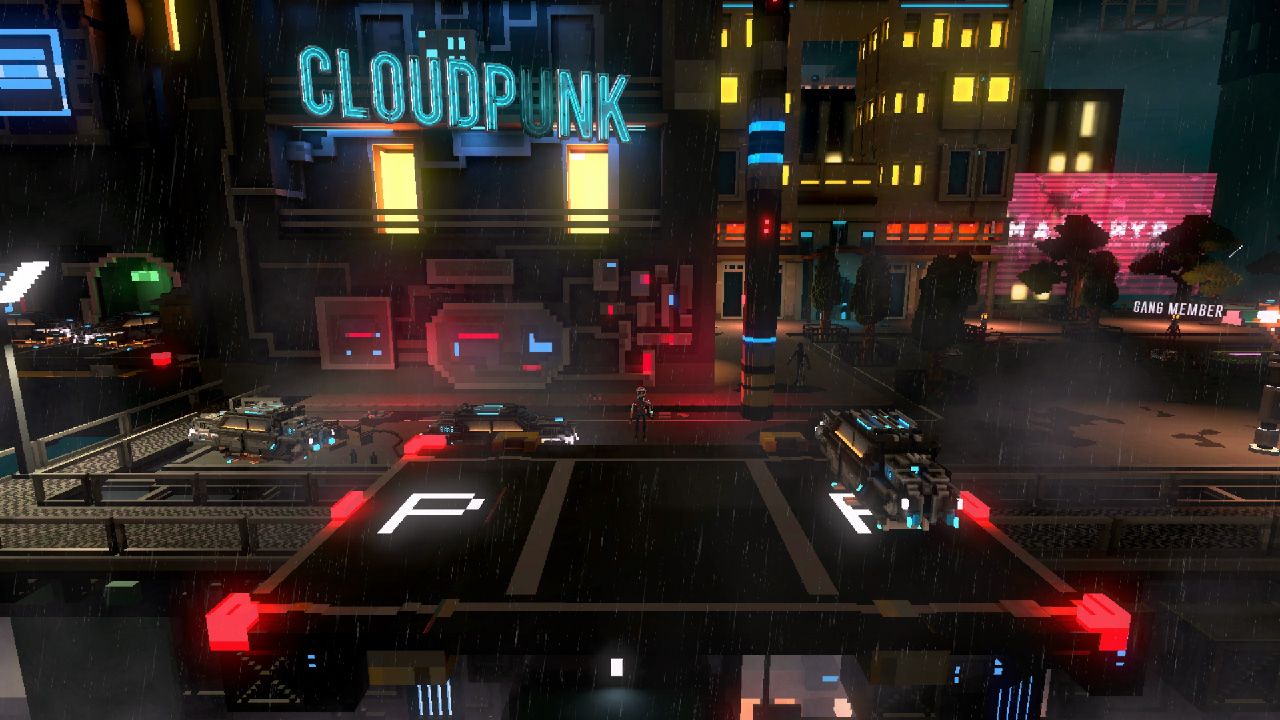 For as pretty as Cloudpunk is, there is no denying that your first hour of gameplay will be every hour of gameplay. Drive to the location via the waypoint, exit the HOVA and collect a package. Drive to the next waypoint, exit the HOVA and deliver the package. Even those missions which have Rania deviate from Cloudpunk to do runs for other organisations follow this formula, and it just isn't interesting enough to carry a 10 hour game. You are often presented with decisions to make, but these barely affect the outcome of missions. There is also the added task of needing to refuel the HOVA periodically and repair it when too much damage has been taken, though there is only an indicator for the former and not the latter. The inclusion of car damage does ensure you need to try and drive somewhat carefully rather than smashing into other vehicles, but repair garages are frequent and cheap enough that you'll likely never encounter much of a problem.

The biggest issue, of course, stems from the difference between this Nintendo Switch port and the game on PC, as clearly graphical sacrifices needed to be made to get the game running. The draw distance is pretty terrible for starters; instead of flying around towering neon skyscrapers, you'll be flying through a lot of grey cloud. Buildings will clip in rather jarringly, making precise weaving very difficult. During the first hour of the game, it seemed that the system really couldn't handle the HOVA making a quick stop at the same time as buildings were phasing in, leading to some freezing, especially in docked mode. However, I did notice that freezing eased up after the first few hours. There are load screens between each area of the city, and considering that you often need to get deliveries from one side of town to the other, you can expect 2-3 load screens per mission which seriously hampers the flow of flying around.

Entering new areas usually sees a lot of lag, followed by a short period where other vehicles may crash into you despite not actually making any contact – especially frustrating considering the fact that the HOVA takes damage. In fact, the entrance of new areas always seems especially jam-packed with vehicles upon loading in. These dissipate and then there are barely any vehicles to be seen, though I am unsure whether this is a bug or rather an attempt to mimic random traffic patterns. One unusual issue was that skipping dialogue did not skip the voice over accompanying it, leaving characters reading out text I had long ago passed, and more strangely, this did seem to fix itself around 4 hours in. For the most part, Cloudpunk performs much better in handheld mode than docked, but players will then have to tolerate the smaller map on which waypoint numbers are unintelligible. 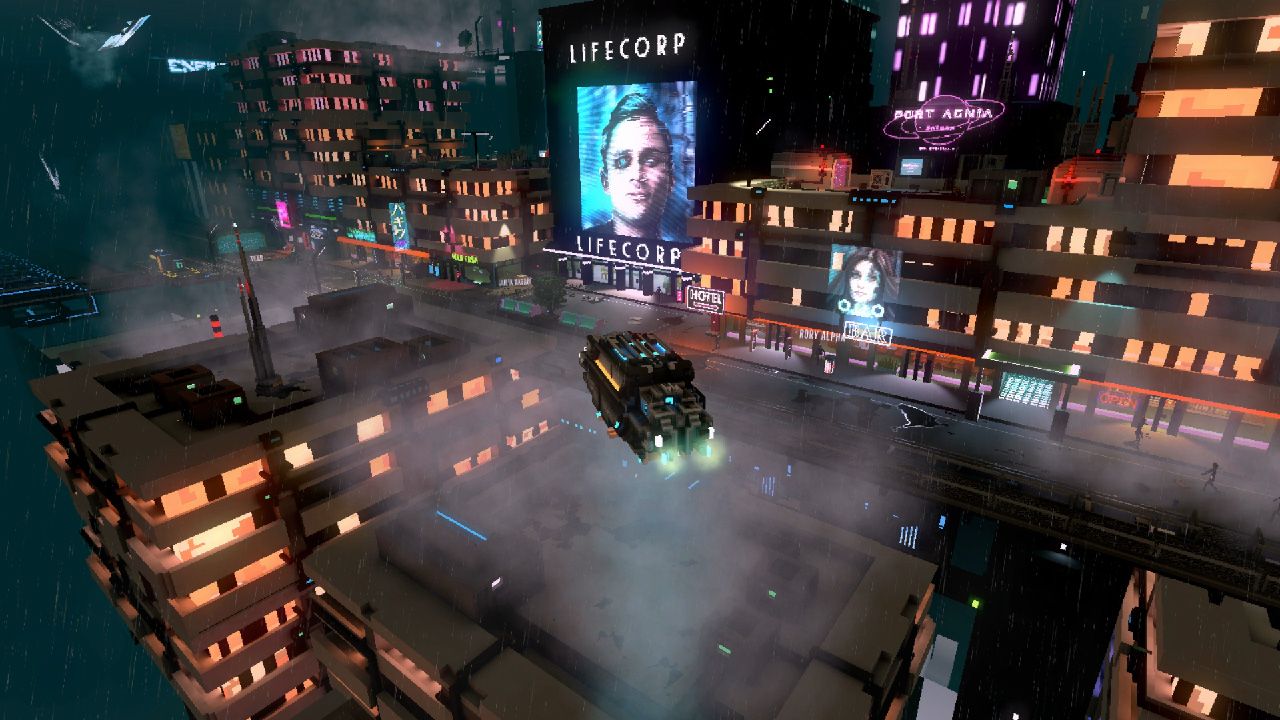 The porting issues also hold back some of the more entertaining aspects of play. For example, the use of 'highways' – light roads which offer your HOVA a speed boost – is an interesting idea, with intersections and other vehicles making it feel like a real city, but there isn't that much to look at while traversing these due to the poor draw distance. In the PC release, players were surrounded by the multitude of wonderfully lit buildings, but in this version the landscape is covered in smog. On foot journeys do not suffer from this problem as much, but considering most of your time is spent in the craft, it's not much of a consolation.

Cloudpunk is a hodgepodge of a pleasing visual style, repetitive gameplay, decent writing and technical failings. There are times where walking around Nivalis feels like something out of a Philip K Dick novel, with dystopian 'Minority Report' style advertisements broadcast over the city as you find yourself doing questionable things, like buying drugs to bribe your way into a seedy night club for a delivery. Rania, and her automata 'dog' Camus, will likely grow on you as you hear their playful back-and-forth during long stretches of driving. Other times, you'll recognise the laziness that seeps through other aspects of gameplay – the repetitive missions, unchanging collectables and even half-hearted naming of recurring, speaking characters such as 'gang member 2'. It's a shame to be sure, as there are quite a few things to like about Cloudpunk, but just enough problems pulling it back to stop most playing for too long.

Our ratings for Cloudpunk on Switch out of 100 (Ratings FAQ)
Presentation
65
A conflicting situation – the voxel style and cool environments to explore while on foot are ultimately hampered by the porting issues which make Nivalis a cloudy eyesore while flying.
Gameplay
59
There isn't much variation in your deliveries as a driver. Every now and then you'll be given an unusual task, but these go down much in the same way. Flying the HOVA feels fun, but again is let down on the visual front.
Single Player
60
With a very straightforward story, dialogue is at least mostly well written and protagonist Rania is interesting enough to keep key story moments feeling dull. There is an attempt to build a sense of lore around the city and genre clichés are both embraced and teased, preventing the story from feeling overly trite.
Multiplayer
NR
Performance
40
Poor draw distance, laggy ship movements, and frequent load screens among other bugs really hinder the entire experience.
Overall
58
You'll likely be able to finish Cloudpunk without running into any game-breaking bugs, but the question is whether you'll want to. Fans of the cyberpunk genre may enjoy running and flying about for a while, but you'd be forgiven for abandoning ship before long. 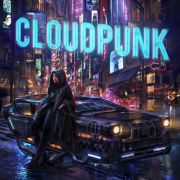