Frictional Games have been steadily building since their humble beginnings. And while their games have gotten better, all have embodied the basic gameplay that made the first Penumbra game a success. The developers even made great use of limited resources, such as opting for invisible monsters or simple text-based narrative techniques. SOMA was a culmination of all their previous work, with presentation and story far beyond their past games. As such, it is sad to say that Amnesia: Rebirth is a step backwards. It’s still a horror game with a focus on light and fear. It’s still an adventure game with the odd puzzle and those familiar physical interactions. But it loses its way structurally and strays too far from the style that has worked so well. It may be a scary ride but it doesn’t stick the landing. 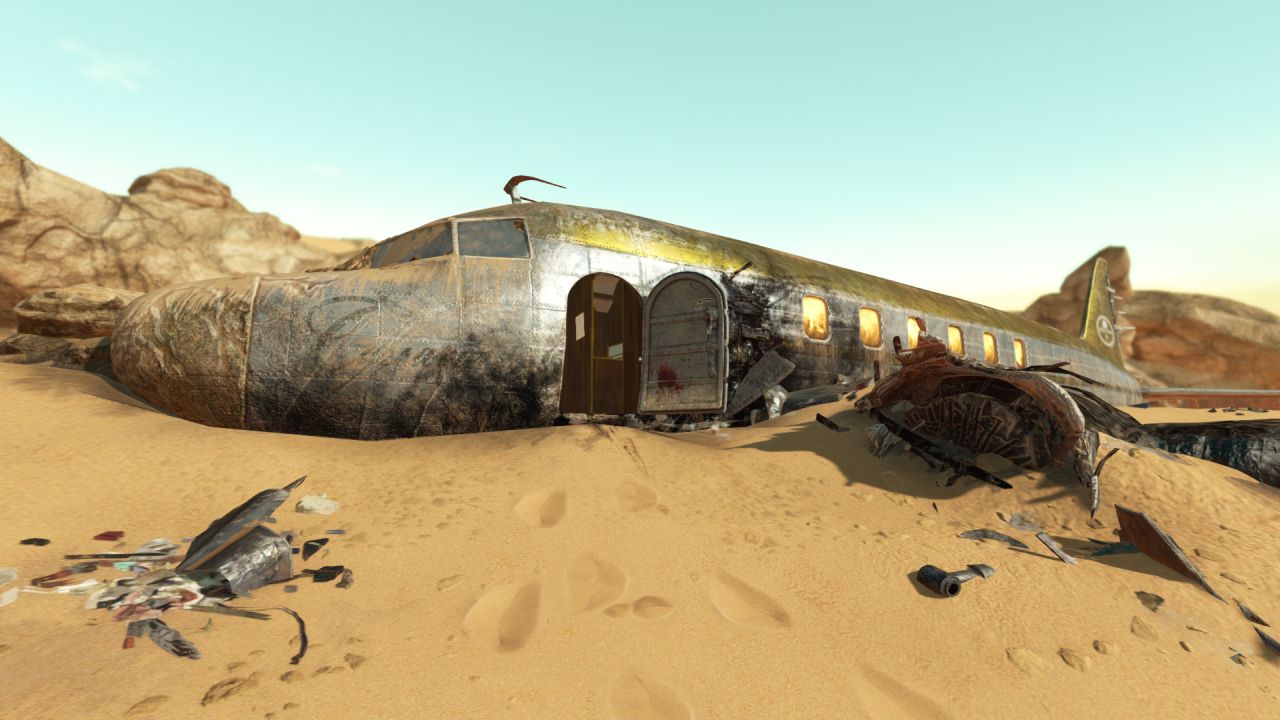 Tasi Trianon’s plane did not stick the landing either; she was aboard a flight across Algeria in 1937 when her aircraft crashed in the desert. Many of her colleagues, including her husband, were aboard, but when she wakes in the fuselage, she’s alone. Outside the plane, luggage is strewn about and two graves make it clear that some time has passed since the accident. In nearby caves, survivors had taken refuge but now some of them are deceased. Although Tasi does not remember, she had also used the caves as shelter. It is unclear how long it has been since the crash and what else she has forgotten. Her husband left a note to say he has gone to seek help. You play as Tasi and set off to find him and your missing memories.

While the amnesia setup fits with the series and gets the player asking questions, the story delivery is uneven and crude. The first hour is drowning with exposition via interruptive vignettes that show a hand-drawn scene alongside a few decent voiceovers. These are Tasi’s memories coming back, told in a way that keeps secrets and yet distances the player from the main characters. Vignettes appear when you pick up documents or just walk through an invisible trigger. In addition to the storyboards, player control is often taken away, either to scare the player, to take Tasi into a dream sequence, or to throw her down a chasm and slowly animate her recovery. Tasi talks to herself a lot, and while her performance is fine it starts to grate.

The starter areas serve as a basic tutorial for the light and fear mechanics. Like the original Amnesia, you gain fear if you stay in the dark or look at unpleasant scenes (e.g. mutilated bodies). Matches can be found and they light wall-torches and candles, and standing in the light will calm Tasi somewhat. The lantern she eventually finds burns oil rapidly but there are enough resources to navigate most dark areas. Unlike the first Amnesia, it is rare to return to dark places so it is unnecessary to seek out the most optimum places to make permanent light. If fear rises too high, then your vision gets covered with worms and eventually you will see loud and rapid flashes on screen. These are no more than obnoxious jump scares. Given all the possible things that could have been done with fear, throwing cheap jump scares at the player is the least interesting and most annoying option. 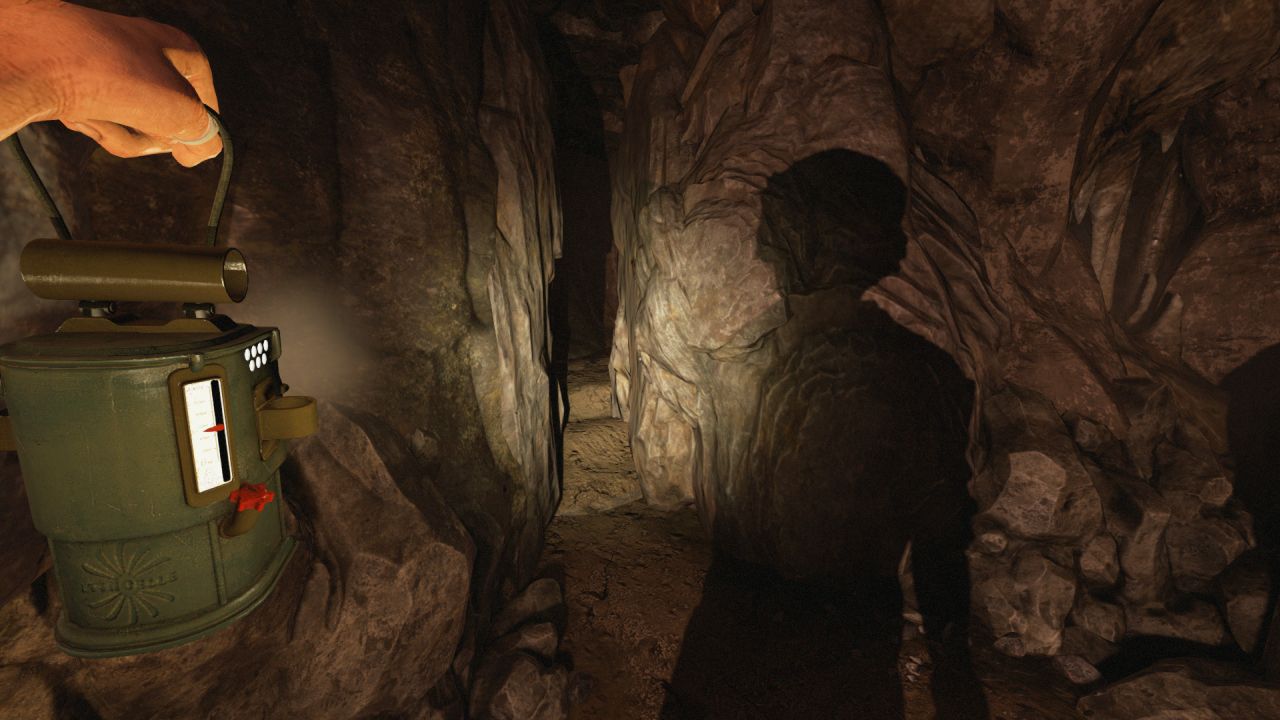 Light your way or live in fear

The other way to lower fear is to rub your own belly. Tasi is pregnant, and she forgot about that too—don’t we all. Her baby randomly kicks to prompt player action. If you succumb to your maternal instinct, those eye-worms disappear and those screen flashes will fade away. Who said babies were good for nothing?

Managing fear is child’s play, until you come across one of the creatures. These tend to get the heart pumping and they can startle. There is definitely cleverness associated with their placement throughout most of the game. There are two main types, although the way to avoid both is not different or hard. Stealth is how you get around them, usually, and it is quite easy. The monster areas tend to be darker and boost fear even more, so those flashes become common. Even if you get caught, it is possible to struggle free by button-mashing. Then you can run to the exit, or just hide again. If you fail to break away, the game will enter a prolonged scripted sequence where Tasi is taken farther back in the area. But this loss of progress isn’t so bad when the offending monster typically vanishes, allowing you to walk through without any threat.

So mechanically, Rebirth is fairly basic: lights, fear, and monsters. Manage all and the rest will be easy. There are puzzles too, but nothing tricky or involving. The game only has a few physics-based puzzles and one involves throwing a rock at a plank of wood blocking a door. Many puzzles are about bringing objects from one room to another, which is about as exciting as rubbing your belly. The only time the game becomes complex is when all elements are combined and this is a rare thing, unfortunately.

The fort area mixes most of it together quite well and is the only time the game feels like a true Frictional experience. Inside the fort is a working radio that Tasi needs to use, but it is behind locked doors. In the dark halls of the desert fort are dead French soldiers, barricades, traps, and signs of decrepitude. It builds an excellent atmosphere. Light some candles and a mysterious wind blows them out. Walk through a tripwire and a crossbow nearly takes your leg off. In one room, some French guards have killed themselves because they preferred that to facing whatever was stalking them. And what was stalking them just scurried down the corridor that you need to go down. The fort level (and aqueduct below it) delivers the best pacing of the entire game with all the usual trappings you come to expect from the developers. 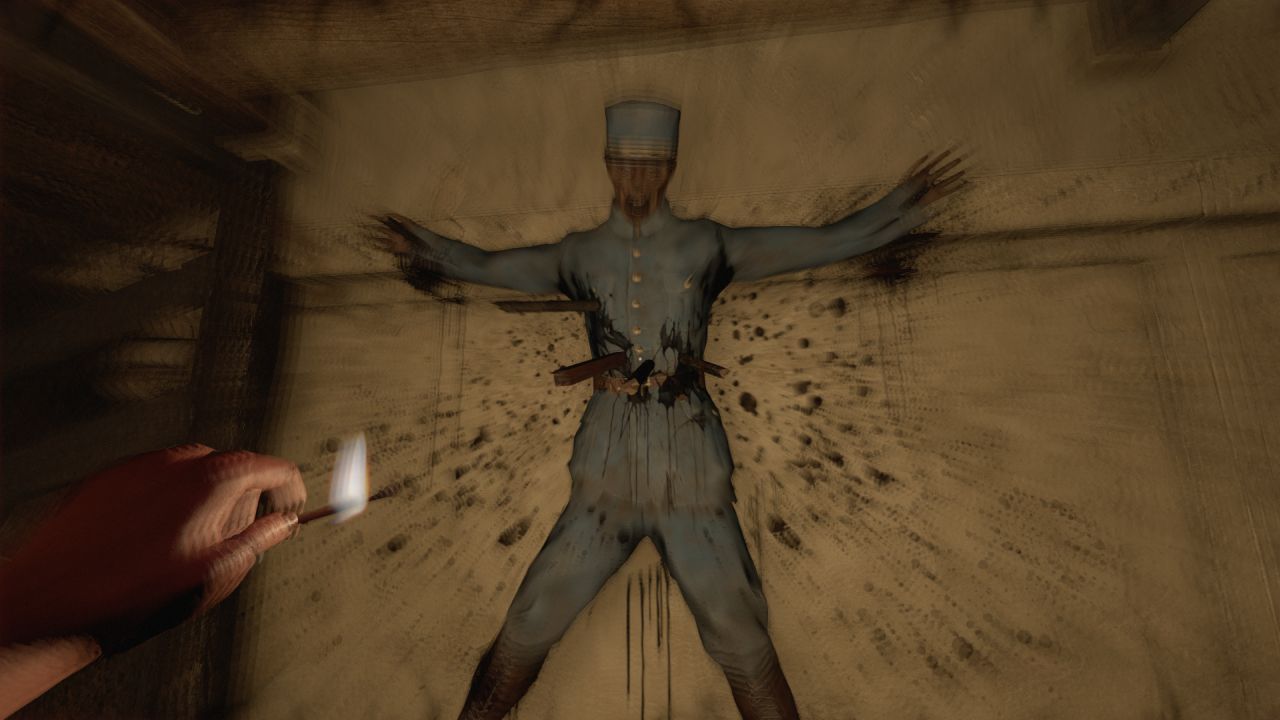 But after the fort, everything becomes a jumbled, uninteresting mess because of how rapidly it flips about. Tasi has an amulet on her wrist, and it grants her access to another world. So for a good portion of the game, you will go back and forth between Algeria and this alien world. Most trips are not optional or planned. One time she falls into quicksand and through a portal. Another time she uses an alien transporter that accidently takes her to the wrong place. The number of times things go wrong for Tasi becomes comically absurd. And player autonomy is always sacrificed for these scripted diversions.

The scripted moments do not amount to much except padding. There are a few chases with monsters in pursuit, a bit like Outlast only easier and less scary. Some parts have Tasi crawling through claustrophobic tunnels or areas with monsters in a semi-dormant state. Certainly there are moments where the game scares, but they tend to be overt screams rather than psychological murmurs. While intermediate tasks do arise, the main goal Tasi received when she was in the fort—find the village with the other survivors—remains unchanged as she bumbles through this foreign place and back again.

The alien world and its lore are not interesting at first. It is a vague place, no more than a persistent distraction. It barely feels like the same experience as the one in the fort, apart from finding matches inside alien containers. Only near the end does the story link with the rest. And that also happens to be when the game mirrors the start and throws vignettes at the player, ripping away control a few times for good measure. There is too much emphasis on creating cinematic moments and not all work well. The whole thing concludes with three so-so endings; although at least all of them can be completed by loading the final save. 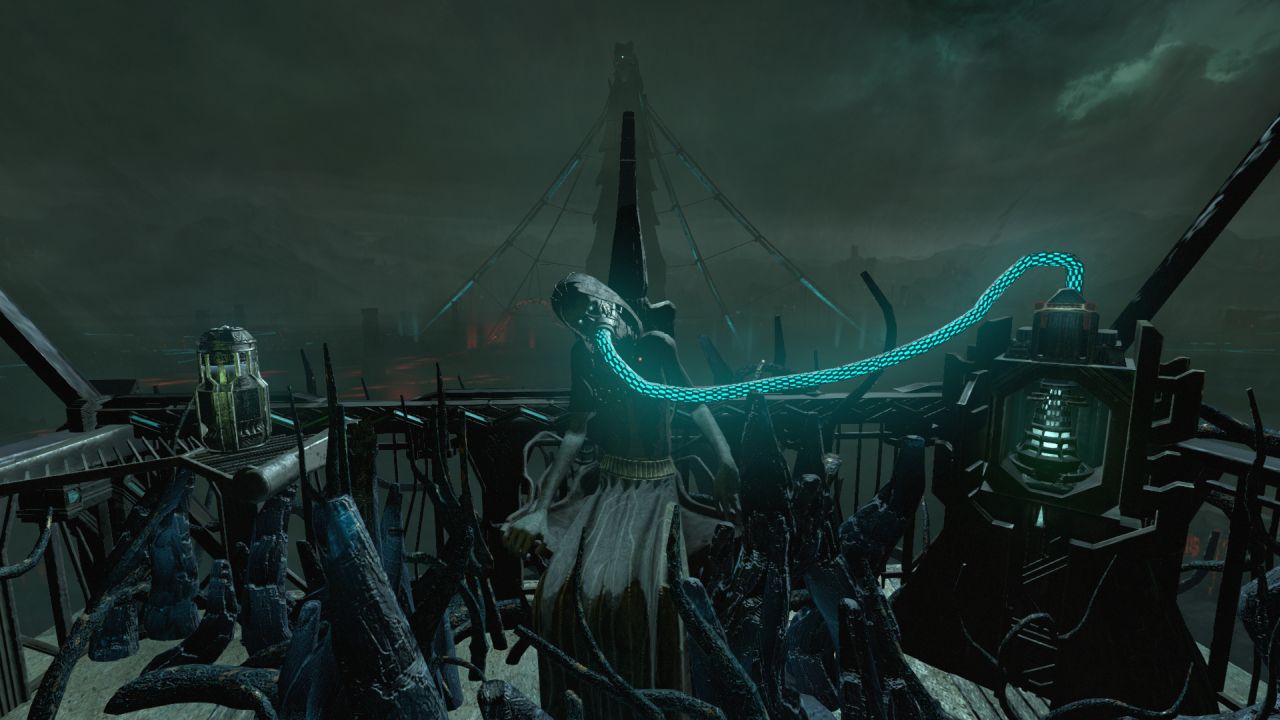 If Amnesia: Rebirth stuck with the tried and true Frictional formula, it would have been a strong entry. But it only demonstrates this style briefly, during a great 90 minute section around a fort. The rest of the eight hours is a boring chore that is scripted and yet also jumbled, thanks to leaps back and forth to an uninteresting alternate world. It lacks puzzles and the story is delivered too densely in the first and last hour. Aside from a couple of tense moments, it is not a psychological nightmare that will get under your skin—those types of scares cannot be cured with a belly rub.

Our ratings for Amnesia: Rebirth on PC out of 100 (Ratings FAQ)
Presentation
75
Hand-drawn vignettes look nice and the voice work is reasonable for the whole cast. Tasi talks a lot but her performance is fine. Atmosphere is decent, but it is still a bit crude visually.
Gameplay
60
Apart from the area near the fort, the gameplay is basic and underwhelming. Puzzles are too rare and simple, and the stealth gameplay is rarely a challenge.
Single Player
55
The lopsided narrative dumps too much boring context in the first hour and then waits until the last hour to deliver the answers before three unsatisfying endings. If there was less of the alien world across the eight hours, the story might have been stronger.
Multiplayer
NR
N/A
Performance
(Show PC Specs)
CPU: AMD Ryzen 5 3600
GPU: XFX RX 480 GTR Black 8GB
RAM: 16GB DDR4
OS: Windows 10 Pro 64-bit

75
Sometimes the game got stuck during loads, but it is free of major issues. Performance is a little rough in places.
Overall
66
Amnesia: Rebirth is a step back for Frictional Games. It offers little substance in the way of puzzles, exploration, survival, or psychological horror. Aside from an excellent sequence within a spooky fort, the rest is an uninteresting mess that relies too much on scripted detours. 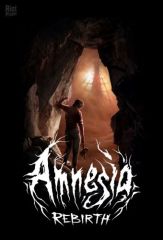 All videos for Amnesia: Rebirth (5)
Advertisement ▼