True Crime and Murder Mysteries have ridden a pop-culture wave over the last few years. From the true crime podcasts of My Favorite Murder and Crime Junkies, to the blockbuster films of Murder on the Orient Express and Knives Out - murder, conspiracy, and mystery have become an obsession. Video games have not been an exception; last year’s Disco Elysium was a worthy detective story, and this year’s Paradise Killer proves to be a very different whodunit that’s equally enjoyable. Bathed in the pinks, purples, and oranges the game exudes a stylish and strange aesthetic that plays well to its visual novel presentation as you interrogate your suspects. The look of the game, blended with rich world-building, strong characters, and gameplay that encourages exploration makes for something that is singular in video games. You may find other elements of Paradise Killer in other games, but no game brings together everything quite like this - making it an impressive debut for Kaizen Game Works. 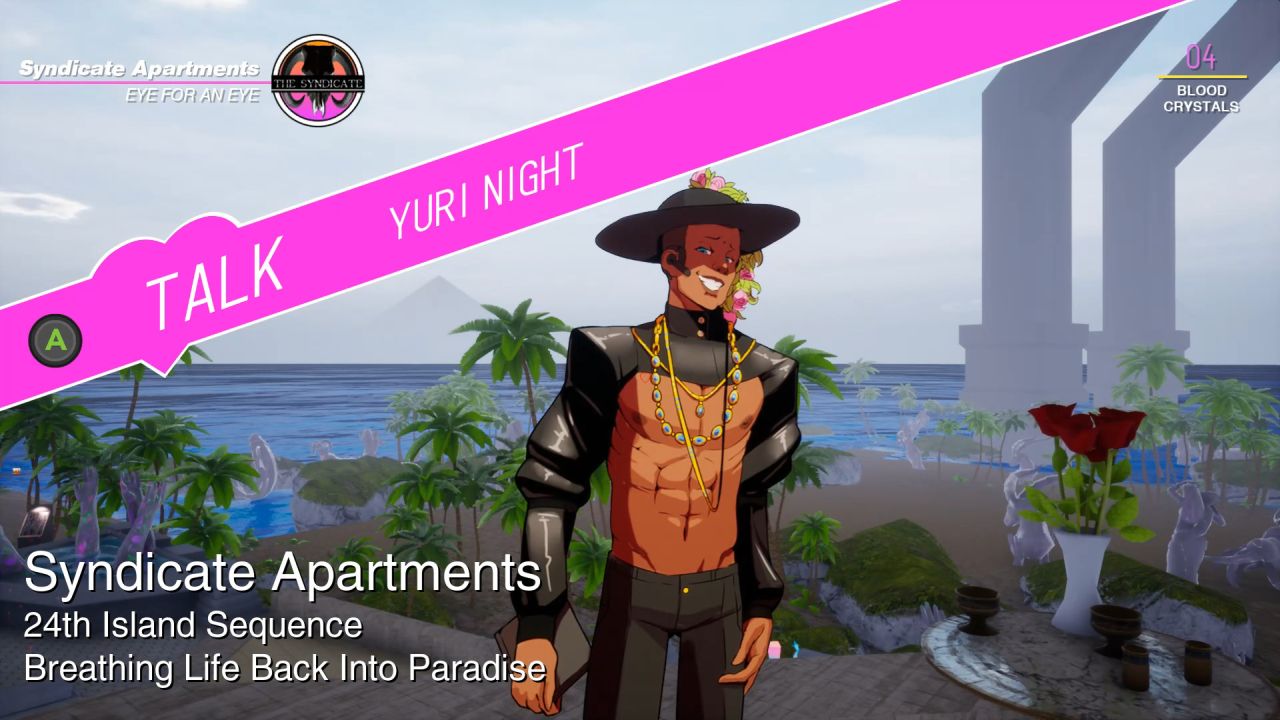 You play as Lady Love Dies - an investigator of incredible skill who has spent 3 million days in exile. Love Dies used to lead an investigation unit that looked into murders and suspicious activity on a heaven-like island created as human beings attempted to resurrect ancient gods. The people of these islands are stuck in an endless cycle of building perfect islands to please the gods, attempting resurrections, having those resurrections ruined by demonic invasion, and then having to build a new paradise and start from scratch. These islands are overseen by a group of political and religious figureheads known as The Council. While The Council are the leaders, a group of immortal beings does most of the work around the island, leading the police/military, being in charge of medical needs, running the bars and transportation - these people are called The Syndicate. Lady Love Dies was a member of The Syndicate who ruined an island when she was seduced by a demon, resulting in her exile. She has been recalled as The Council have been murdered and her old friends/enemies in The Syndicate are all suspected of the crime.

Being an open-world exploration game, Paradise Killer has the unenviable task of telling a murder mystery story but leaving the threads of the story to be told in any order by the player. Yes, the game does gently direct you around the world, and most players will likely begin their investigation with what is closest to them, but the game does incentivize you going off the beaten path and exploring. What’s impressive is how well it manages to carefully breadcrumb out the elements of the plot in whatever order you find them in. I pretty quickly was able to piece together some clues about demons using a secret underground passage, but some big clues eluded me until about halfway through the game. The mystery isn’t quite as much fun as the process of bringing it all together - and hinges on a plot point that might be easily missed by players. Still, getting to know the characters, the world, and how the murder has thrown everything into chaos is exciting and interesting.

As a first-person open-world game, it's using the same mechanics that one would find in a walking simulator like Proteus or even a Bethesda RPG (sans the combat). As you explore the world and talk to the suspects, there are clearly paths laid out for the player to follow, and while those can sometimes lead you to a suspect quickly, you’ll often want to go exploring. Not only can you find clues off the beaten path, but you’ll also find blood crystals. Blood crystals are an important currency; you can use them to bribe informants, buy items, purchase upgrades, and unlock/use fast-travel points. There are probably close to 100 blood crystals in the game, so they’re not hard to find and you should use them liberally. It makes the game a little tricky to get into as starting with no money means your resources are thin - but as you progress it becomes easier and easier. 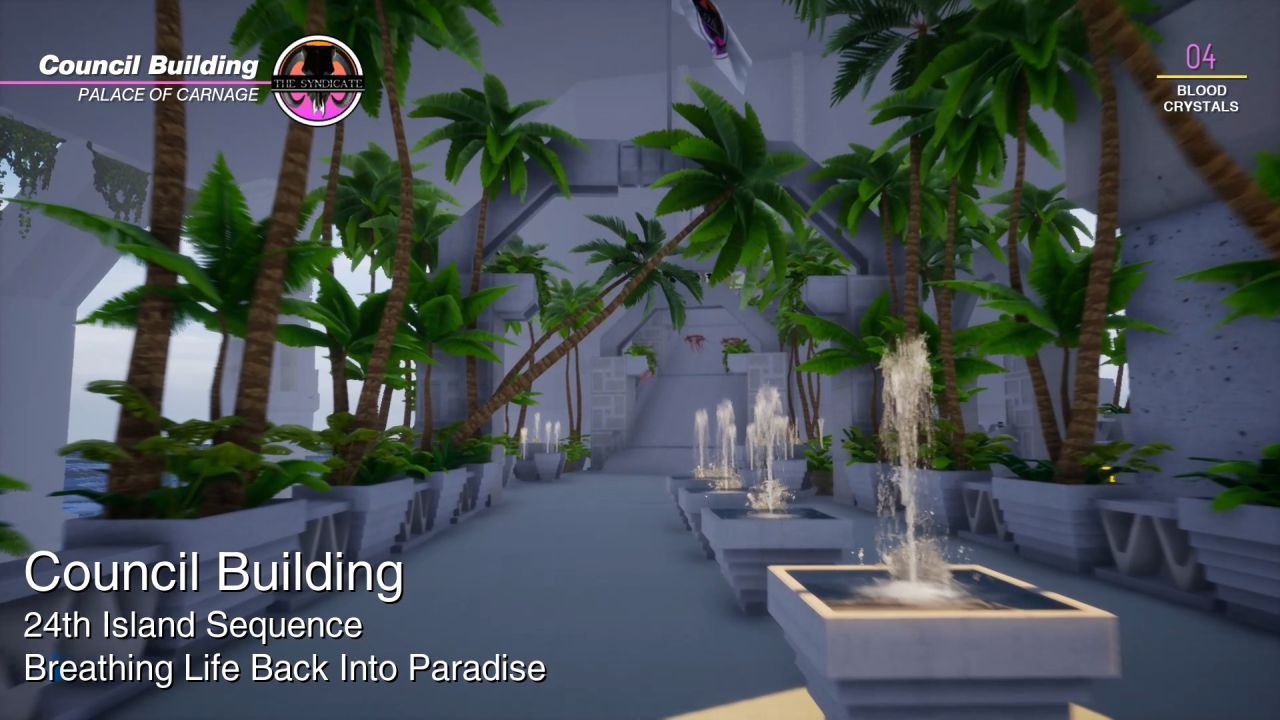 Mostly what you’re doing is discovering secrets, finding clues, and interrogating witnesses through a visual novel-like interface. It’s a little hard to follow at first because the game tends to bring up clues, but doesn’t always communicate when a clue is solid evidence. For instance, if you find a dagger, you may think it’s the murder weapon, and when you talk to a suspect who admits the dagger belong to them - you may feel like that’s an important clue, but the game doesn’t always surface that. Paradise Killer is expecting you to have your own light bulb moments. While the game does do a good job of presenting and laying out everything you’ve learned, you’ll sometimes have to draw your own conclusions.

Those conclusions get presented in a trial that happens at any time the player chooses. You may think that you’ve discovered everything, but if you want to circle the island one more time, that’s always an option. When you decide to begin the trial, each mystery will be presented to you and you’ll have to determine who is guilty of a crime. The game will then catalogue the evidence for that suspect’s guilt and determine whether your case is strong enough to convict them. There are multiple ways everything can play out, and there is a “canon” ending. It’s hard to imagine a player not wanting the true ending, but you can cut your playthrough short and jump straight to the trial with incomplete clues to see how things shake out.

The game obviously has budget limitations, but the open world that has been built within those limitations is incredible. In some ways, the polygonal art asset adds to the strangeness of the world, making it that much more alien and bizarre. The color palette is filled with pastels and soft colors; it feels like the island is always trying to replicate the perfect sunset. Elements of the island feel lived in, as you’ll explore the dirty and grungy underbelly of the city where real people lived and suffered. You’ll also explore the lavish trappings of the upper-class that have the faux-luxuriousness of a Cheesecake Factory. The planning and design of the island feel natural and poking around is always rewarding - both in terms of what you’ll find and what you’ll see. Behind all of this thrums a fantastic soundtrack. Electronic, pop-y, and a little-too-cheerful, the score is much like the world around you - a veneer of happiness on top of something sinister and revolting. The one quibble I have with the game is the lackluster voice acting and how it's used. Like some visual novels, characters have a set number of lines they’ll audibly say that don’t always match up with the text. It’s a little off-putting on its own, but it’s worse when the voice acting isn’t that great to begin with. 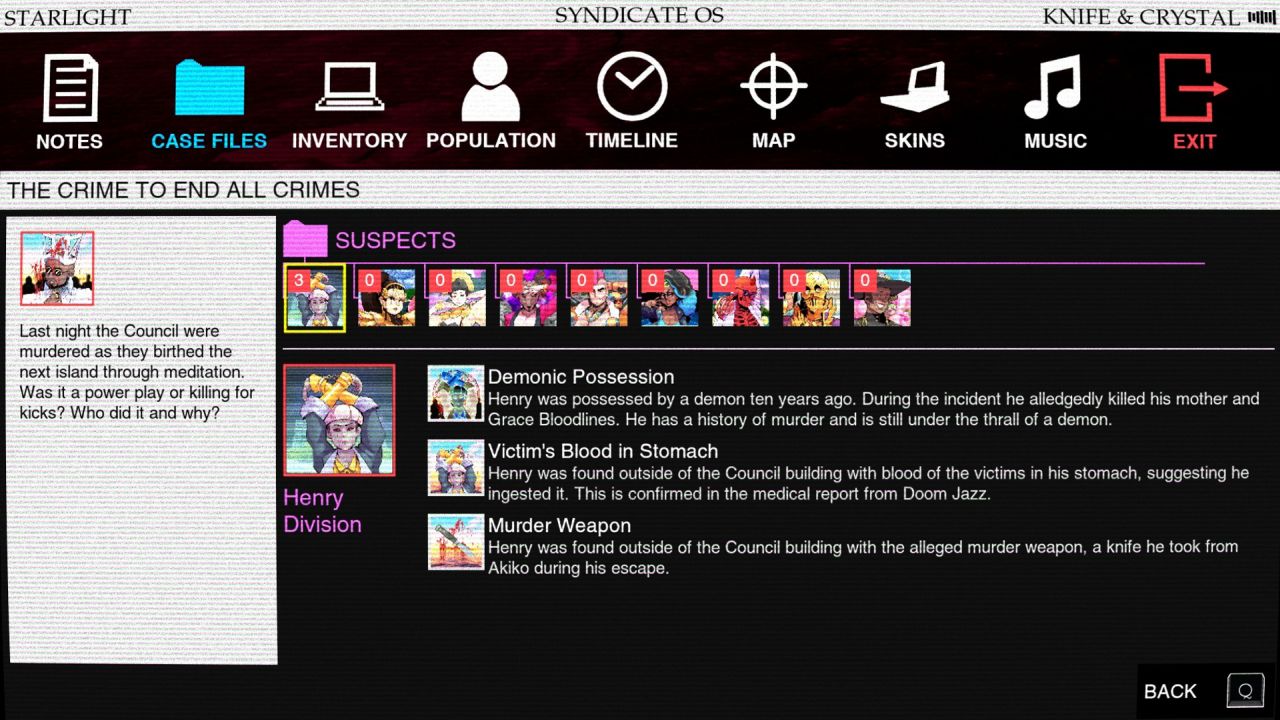 But the biggest flaw - which seems to be the Achilles' heel of all open-world games - are the technical elements. Paradise Killer doesn’t allow for auto-saving or the ability to quick save; you have to travel to specific points on the island to do that. In the game’s defense, these save points are literally everywhere - you’re never more than a minute from one of them. The downside is that the game is a little buggy and has a tendency to crash, which is frustrating when you can’t always save your progress. I never lost too much during a crash, but it is annoying when you have to repeat the same action twice or occasionally three times.

Hopefully, the game will see a patch, and the technical flaws shouldn’t put you off of Paradise Killer. The game is fascinating and its themes blend together in ways that are singular in video games. There are elements of classism, Lovecraft, police-state, occult, assassins, body-horror, sexuality, empowerment - just so many different ideas packed into one little island that it’s no wonder things went so poorly for everyone involved. Having so much to say and so many ways to say it would make most games feel thin and scattered, but Paradise Killer manages to take all of these themes and hold them together with the world it builds, the mystery it spins, and the aesthetic is sets everything to. This game is strange and beautiful, scary and enticing, and it's a mystery worth solving.

Our ratings for Paradise Killer on PC out of 100 (Ratings FAQ)
Presentation
85
The voice acting is distracting, but the way the game looks and sounds is incredible. This is the faux-luxury equivalent of going to a Cheesecake Factory on the Miami beach, filled with potential murderers.
Gameplay
80
Exploring the world and finding everything is rewarding and enticing. It’s also fun to put together the clues in the trial. I do wish certain elements were better communicated.
Single Player
90
The mystery hinges on something that’s a little tricky to find, but the characters and world are phenomenal. I loved learning more about Paradise, its politics, and its strange inhabitants.
Multiplayer
NR
None
Performance
(Show PC Specs)
CPU: Intel Core i5-3570K
GPU: Nvidia GeForce GTX 660
RAM: 8GB
OS: Windows 10 Home

65
The technical issues are the main drawback. It doesn’t ruin the experience in the end, but the requirement of save points and the crashes make it more frustrating.
Overall
84
Few games can offer something quite as weirdly creative as Paradise Killer. Exploring the island, talking with the suspects, piecing the mystery together, and holding the final trial is a thoroughly enjoyable ride in this open world crime mystery. 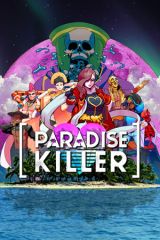