Let's get mad, bad and crazy

While we live in the age of remakes and re-releases, some franchises choose to simply re-introduce themselves to a new generation by creating a new adventure that follows the old one. Battletoads was released back in the early 90s, and has achieved somewhat of a cult status thanks to its gameplay variety, and high difficulty. At the tail end of the Xbox One console generation, Microsoft and Rare, with the help of Dlala Studios, have decided to bring the series back. The new 2020 version of Battletoads annoyingly uses the same name, but it tells a new story in hopes of attracting old fans and recruiting new ones. Sadly, its poor mash-up of genres and the generally underwhelming execution won't thrust this franchise back into popular circles. 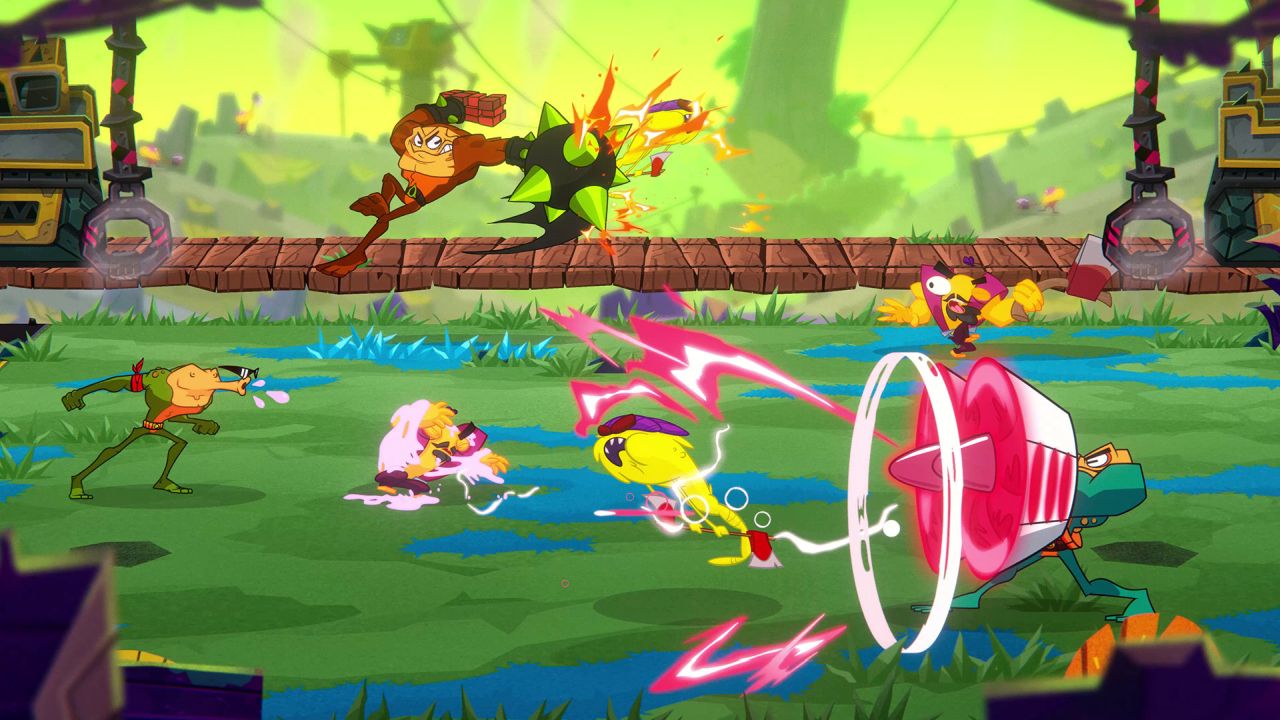 The new Battletoads reintroduces Rash, Pimple, and Zitz, the three toads from the original game, who have apparently been stuck in a bunker without realizing it, for the past 20+ years. Upon finally getting out, the team realize they are no longer famous saviors of the galaxy, so they set out to complete their quest of eliminating the evil Dark Queen, who is also from the previous game. However upon reaching her, they learn that she's been robbed of her super powers by a new evil alien race called The Topians. They team up with the Queen, and journey through the galaxy to eliminate the evil leaders of these aliens.

The story is quite straightforward, and is highly reminiscent of an episode of a modern cartoon show you'd find on Nickelodeon. This includes whacky characters, obnoxious dialogue, and a variety of jokes. Some of the humor manages to land, while a lot of it is just throwaway gags that are targeted at young kids who consider themselves hip. The writing is pretty basic, but some of the voice acting is just downright poor in its delivery. On the other hand, the soundtrack is quite enjoyable, providing nice rock music riffs over the course of the adventure. The game is also very comparable to modern cartoons due to its art style; the frequent cutscenes have got that colorful look with detailed animations. In some ways, it can be favorably compared to the style of Cuphead, just with a modern animation visual design.

For a portion of the game, Battletoads is a typical 2.5D brawler. This means you'll be moving scene to scene, and fighting random bad guys until they all disappear. The combat is fairly complex, in that you have the regular light/heavy attack, but also a kick which is needed to break through enemy blocks. You can also jump and perform these attacks in the air, which modifies them. You've also got the tongue related moves, activated by holding the trigger as a modifier, which lets you spit gum to slow enemies, and use your tongue to pull yourself/others inwards. The three toads share control schemes, but have different attacks and styles, from fast to slow. There are combo counters and special moves; it's a pretty deep system, but not one that's all that intuitive to use. 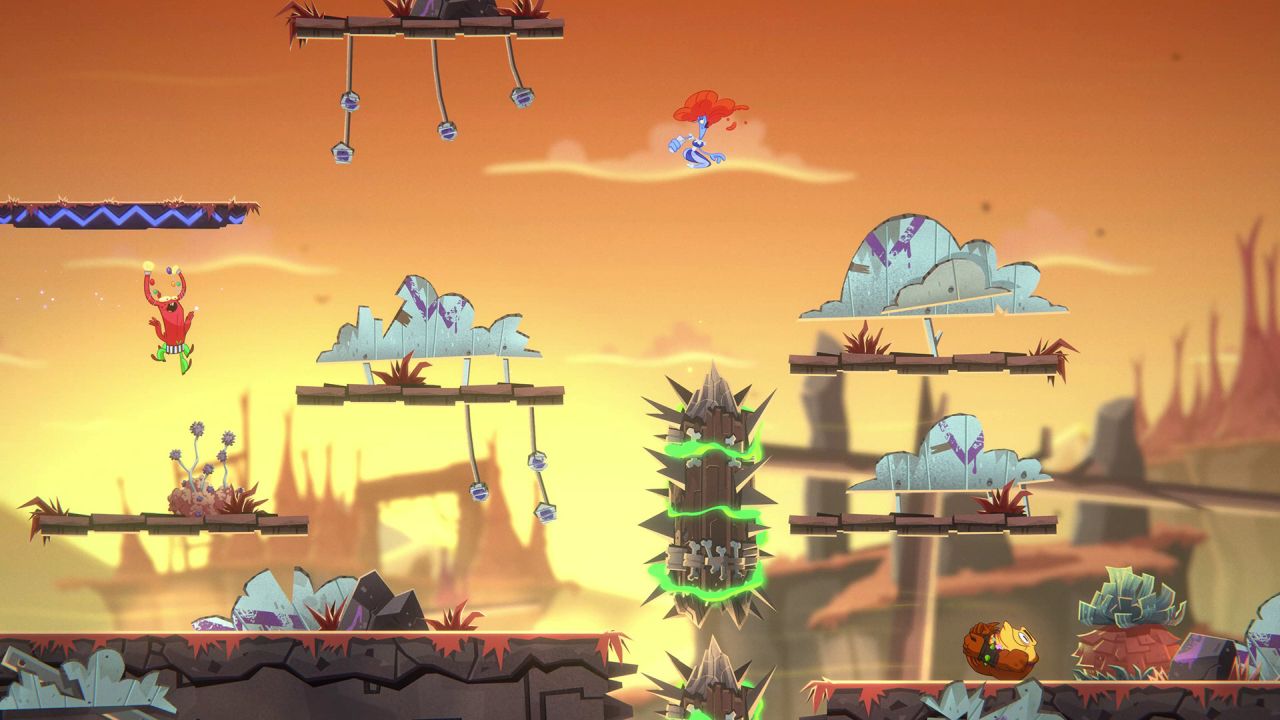 Button mashing will get you places, but only on the easiest of three difficulties. Perhaps as a callback to the original, the game is very challenging on medium and hard settings. The toads will go down quickly, and your dodge move can be inconsistent. You've only got a few lives, and healing only happens in the form of flies which you have to eat, and they don't appear all that often. For an enjoyable time, you should definitely stick to the easy setting, as anything above that becomes easily frustrating. There's also an invulnerability option if you get stuck.

Between the fight rooms, you'll come across a few puzzles that are quite easy and very basic, in the form of a hacking minigame, and a flow-puzzle to guide a spark from one end of the panel to the other by maneuvering wires. And this is the strangeness of the new Battletoads begins - while it classifies itself as a brawler, for half of the game you'll actually be doing something else. There are levels which are 2D puzzle/platformers, there are bullet-hell space shooter levels, there are levels where you play a hacking game through a series of gimmicky input challenges. And of course, there are hover bike levels where you must dodge obstacles coming at you. All of these are like demos of other games, but they go on for longer than you expect (upwards of 10 minutes) and sort of outstay their welcome. There's also strange interludes between levels where you could play a weird version of rock paper scissors, or do QTEs that show the toads doing their new "day jobs".

With such a mish-mash of concepts and gameplay mechanics, none of it really stands out or is all that enjoyable. The brawling is okay, the space shooting is kind of fun at a very basic level, the 2D platforming section gets tedious pretty fast due to unresponsive controls. And before you know it, it's all over - the game clocks in at under 3 hours, and feels like a collection of student demo levels strung together by a story and some good production values. But insofar as gameplay is concerned, it's just too simple to even criticize; there was no ambition here to create something worthwhile or mechanically complex. 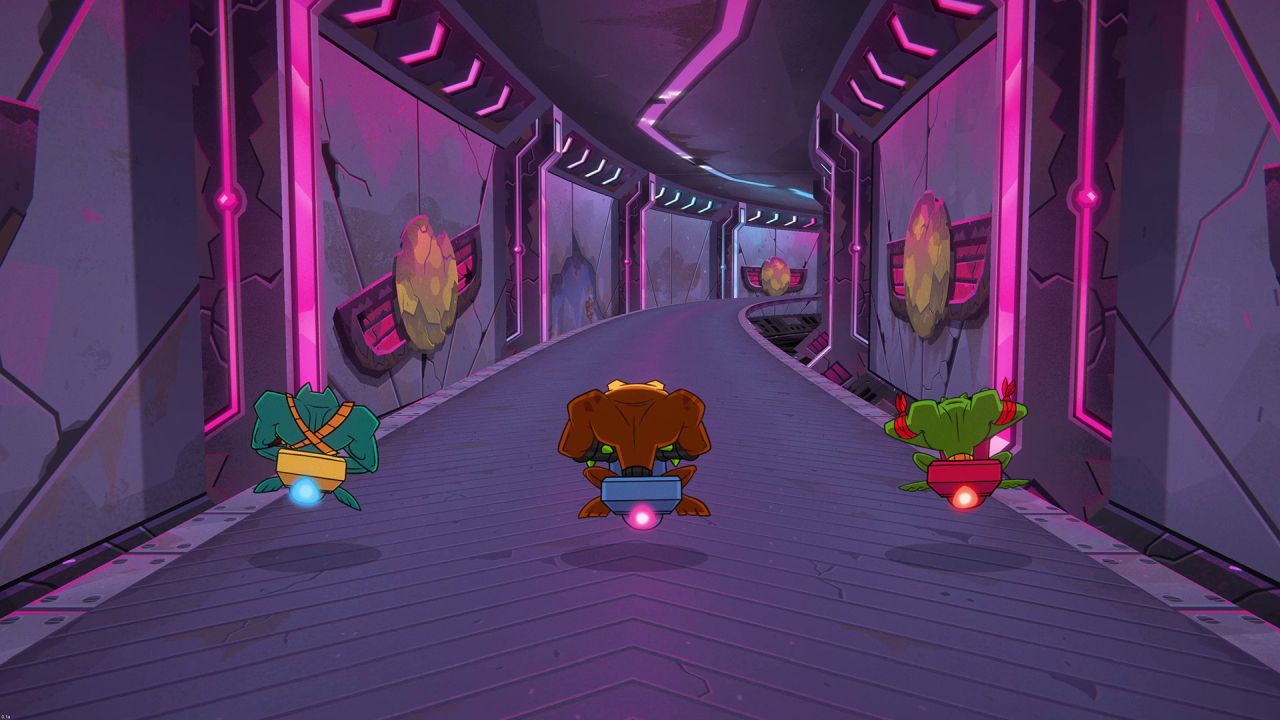 You can perhaps have extra fun, laughing at the absurdity of it all, with the help of friends. The game supports 3-player coop for the entire campaign, though disappointingly it's local multiplayer only. When playing solo, you can switch between the three toads to give yourself more lives; and of course with other players, each controls a toad. When it comes to minigames, the tasks are usually split up. For example in the space shooting levels, you'll have to do all the flying and shooting when solo, but in co-op one person takes the wheel while others shoot. It makes the game more entertaining, though by no means easier.

When you're done with the campaign, there's not much left to do. You can go back and pick up some collectibles (which are quite easy to spot), or try to improve level high scores and completion times. But with no online leaderboards, you're just trying to outdo yourself.

The 2020 Battletoads is a strange concoction, like mixing a bunch of soft drinks - the result is just not very good. The game has the art style, writing, and production values of a teenage TV cartoon, which is already going to be divisive due to its jokes and writing style. But in gameplay, it comes up quite short, with a rather brief campaign that's filled with one-off levels that seem to go on for too long, and don't offer much depth. It's really difficult to ascertain who the target audience for this is - the nostalgic players will be annoyed by the story and characters, while newcomers who expect decent, modern gameplay will be equally depressed. It's just an experience that manages to last 3 hours and yet offers a whole bunch of nothing - bad or good. And you'll be paying $20 for the privilege.

Our ratings for Battletoads on Xbox One out of 100 (Ratings FAQ)
Presentation
70
The game looks pretty good and is well animated, though the story and jokes will either amuse or annoy, depending on your sense of humor. The voice acting is rather poor.
Gameplay
50
A mish-mash of genres stuffed into one game, and none of them are particularly polished or all that enjoyable.
Single Player
40
The game runs at just around 3 hours, with the only replay value coming from easy collectibles. The difficulty bar is set quite high.
Multiplayer
60
Playing with others helps alleviate the pointless feeling of the minigames, and adds at least some replayability. No online play is a big miss.
Performance
90
No issues
Overall
50
Battletoads is a strange collection of levels with different gameplay mechanics, and almost none of them are worth playing. Like an episode of a kids TV show, it looks nice and you might get something out of it - but it's quickly forgotten. 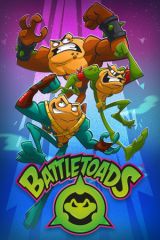