First-person puzzle games are more or less my kryptonite. I've ignored countless AAA releases over the years, but when a new gimmicky puzzler drops, I'm all over it. And to be honest, I don't think it's that unreasonable to be excited. The genre has blessed us with the likes of Portal, Q.U.B.E. and The Witness in the past. These titles excel at experimentation and unique challenges that are a blast to tackle. It's been a quiet year for the genre, though, which is why Relicta stood out to me immediately. The debut effort from Mighty Polygon may not have the highest of profiles, but it certainly looked the part of the next great in the genre. 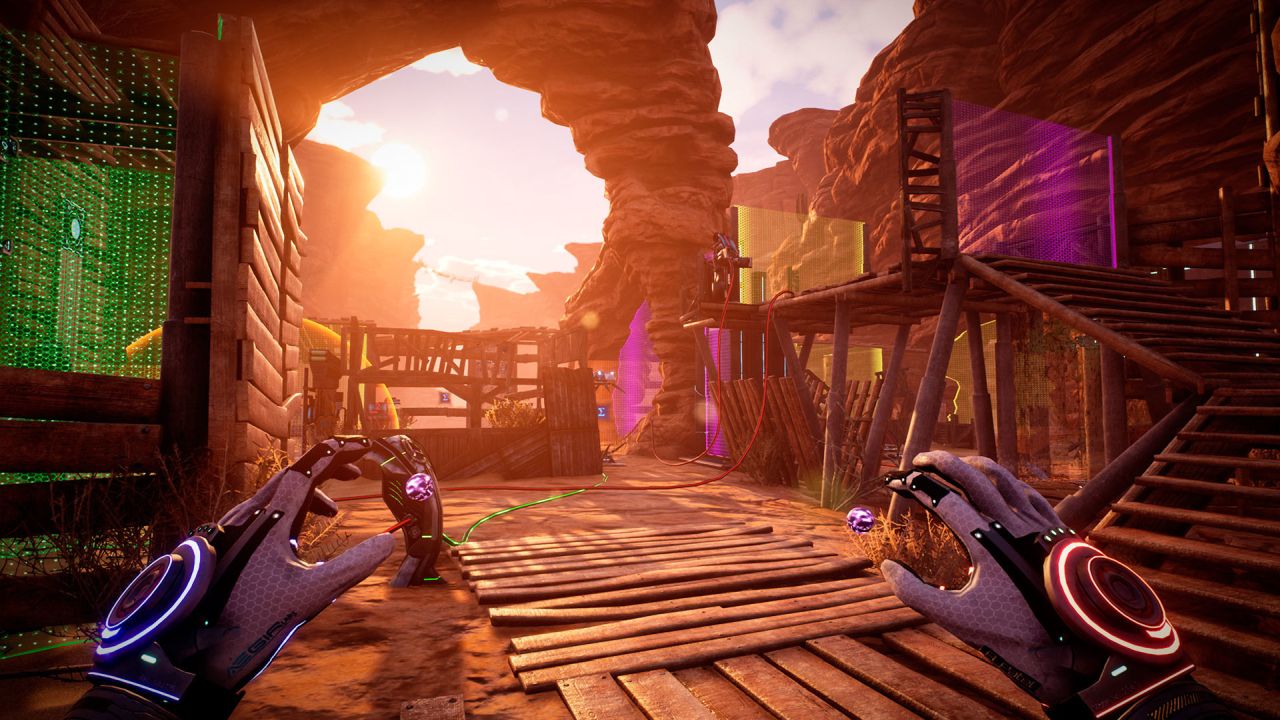 In the 22nd Century, the world has finally gotten its act together and managed to return to the Moon. Not just the land there and plant a flag, either. Bases and research facilities have been established that are pushing the boundaries of scientific possibility. Dr. Patel is one such scientist stationed on the rock, specifically the Chandra Base. She's one of the brightest minds in the world, and her team has discovered something extraordinary: the Relicta. A purple, glowing rock with potential just waiting to be harnessed. That potential, though, may just prove to be too dangerous to handle.

Science run amok is often a theme of the genre, and Relicta is only a little different. Dr. Patel and company aren't evil or careless, they just didn't know what they were dealing with. Who could have thought that the mysterious, ominous rock would start messing with the AI aboard the base? Due to how it effects the system and Dr. Patel, there's an air of confusion to most of the plot. You often don't know what is and isn't real. You're drawn further into the mystery the more you explore. It helps that the relationships between Patel and her crew are fleshed out and lived in. The script may not always be perfect, but it does a good enough job of getting you invested.

The world of Relicta is broken down into two specific categories. There's the time you spend at the Chandra Base and the time you spend out in the terraformed areas of the Moon. All the unique areas of the Moon are connected via the Chandra Base, so you are frequently moving through the research facility. While you are moving to the next location, though, you can explore the various rooms of the base in search of collectibles and documents. The collectibles don't add much, but the documents provide a decent amount of backstory and depth to the world. They're not necessary to understanding the plot, but they do help flesh out certain characters and points. 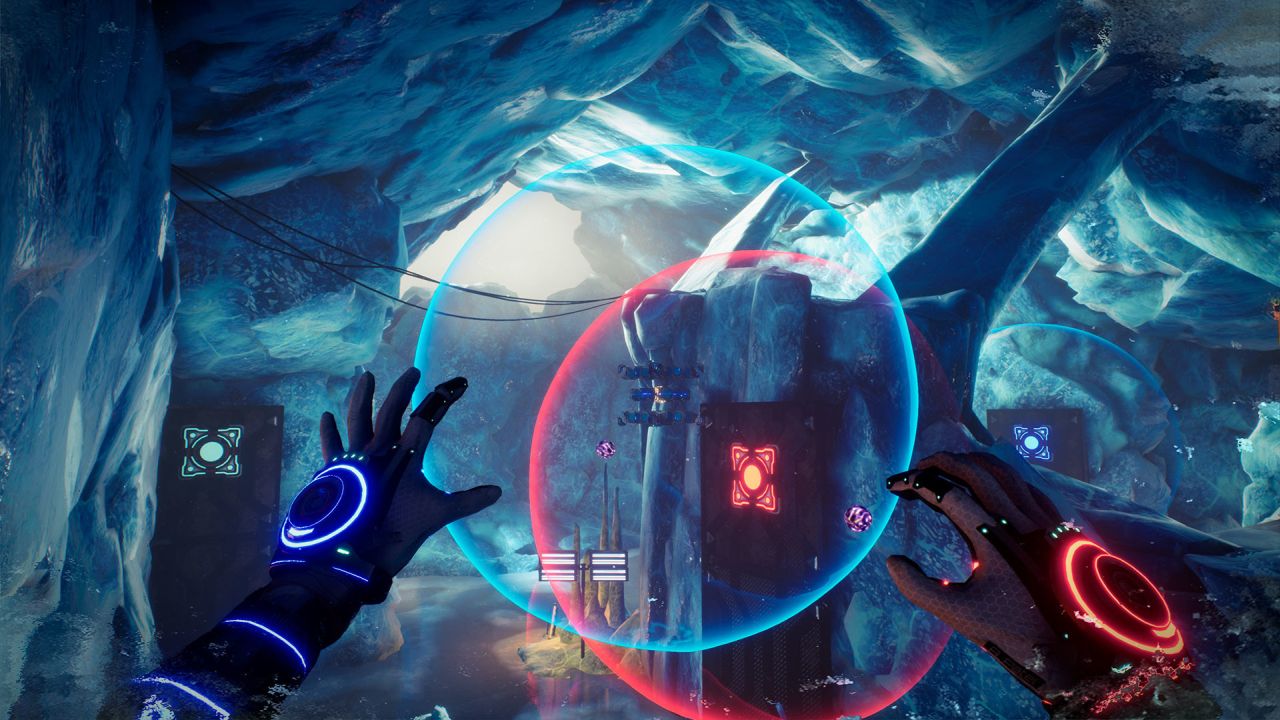 You'll be spending most of your time out on the Moon itself, though. However, don't expect to see the traditional rocky terrain of the natural satellite. Terraforming has led to different parts of it getting modeled after various climates of the Earth. There's an arctic area, a jungle area and even a desert-like location. Dr. Patel's quest to save the day will take her through each and every crater of the Moon, and unfortunately, it won't be easy to get through. Since the AI has been compromised, all the training stations are still active, and in order to fully move through them, Dr. Patel will need to clear each one. Call it a plot contrivance if you must, but the fact is, someone has got to solve these things.

The training stations were originally setup to test out magnetic gloves that were developed at the Chandra Base. These gloves allow Dr. Patel to alter the polarity of a given target. Most of the time, they are used on boxes positioned at station, but wall panels can be adjusted as well. Additionally, the boxes can have their gravity altered so that they can more easily float and move. In order to get through a station, you'll need to use the tools available to place the boxes upon weight-dependent switches. Due to the abundance of gates, though, this is easier said than done.

In its best moments, Relicta feels like an intricate piece of work. The puzzles can be crafted in such a way that everything feels perfectly put together. You push and pull boxes around the course, over and through specific gates until you deliver it to where it needs to go. It feels great when you finally piece together the solution, especially due to how difficult the title can get. The later stations are multi-step affairs that really require you to think about how to proceed. I often would need to walk around the course just to get my bearings before even formulating a plan. It can feel a tad overwhelming at times, but as someone who craves a challenge, I appreciated the work put into them. 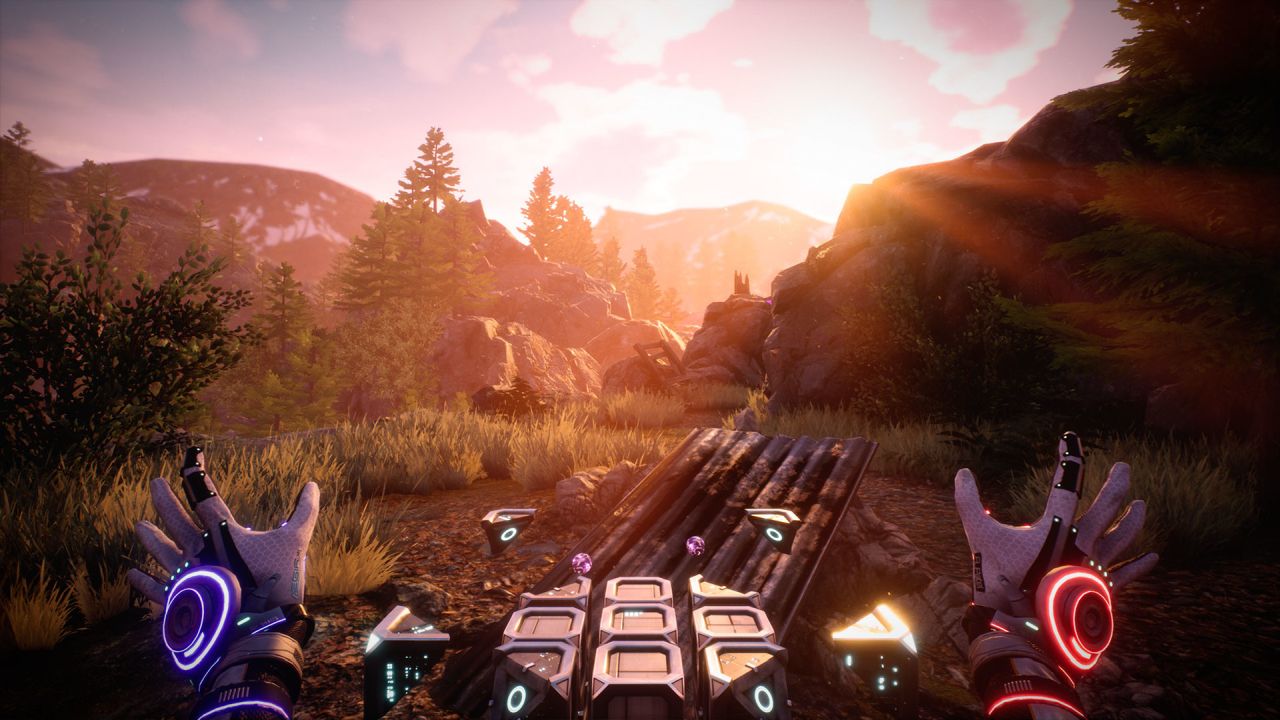 However, not every station feels as expertly put together. Certain areas require you to rely more on the occasionally wonky physics than I would like. Specifically, altering the polarities of two objects so that they push apart rather than come together. Not only can it be difficult to aim where the box is going, but it can be inconsistent as well. In one area, I did the same exact action twice, but the box ended up in two different locations. It can feel less like relying on intelligence, and more on just luck.

Like some of its contemporaries, Relicta has a sleek and futuristic look to it. The Chandra Base will instantly feel familiar to sci-fi fans. The terraformed craters of the Moon also look nice as well. Each element is well depicted, and offers up some solid vistas to take in. However, there is a bit of dullness to the entire visual palette. They don't add anything to the gameplay, and invisible barriers prevent you from going outside the guided paths.

In the pantheon of first-person puzzle titles, Relicta may not be among the best, but it's still a solid first effort. The puzzles are mostly well designed, with the best examples providing a stiff challenge to even the most seasoned vets of the genre. Mighty Polygon was also smart to break up the puzzle sections with engaging pieces of storytelling. However, a fair batch of the puzzles often rely more on luck than skill, and the visuals, although pleasant, add little to the gameplay. If you're looking for something to keep your mind occupied during the dog days of summer, though, you could certainly do worse.

Our ratings for Relicta on PlayStation 4 out of 100 (Ratings FAQ)
Presentation
68
The sci-fi setting of Relicta is well-depicted. The Chandra Base has a sleek shine to it, and each of the craters has their own style. However, there's little detail to be found, and the visuals add almost nothing to the gameplay.
Gameplay
80
For the most part, the puzzles of Relicta are incredibly well-designed. The control scheme is easy to learn, which makes planning out your moves a breeze. However, the puzzles that require you to rely on physics are inconsistent and frustrating.
Single Player
80
An intriguing mystery may be the drawing point of the story, but it's the characterization that makes it worth getting invested in. Dr. Patel is a fascinating character, and her relationship with the crew is well fleshed out.
Multiplayer
NR
None
Performance
85
No issues to speak off while playing on a base PlayStation 4.
Overall
78
Relicta is a smart, well-designed puzzler. It provides a tough challenge that really forces you to carefully think about each move. It's not always perfect, but is a solid entry into one of my favorite genres. 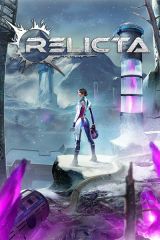 All videos for Relicta (1)
Advertisement ▼